A revolutionary way to treat wastewater

Wastewater from industry and sewage facilities undergoes a lengthy treatment process before it is clean enough to be safely discharged into sewers or waterways. Besides, the removal of organic compounds from effluent can be an expensive, energy-intensive, and at times difficult affair.

But a coincidental meeting between an Australian clean-tech entrepreneur  and  microbiology researchers has given rise to a solution that not only makes water treatment more cost effective and easier, but can also contribute solutions to other pressing development challenges such as sustainable aquaculture and a lack of access to sanitation in rural areas.

Meet BioGill, an Australian company that has developed a unique system, which treats water that may typically be too dirty or oily for other systems, using less energy. This is being done with nothing more than a low-energy pump and a special technology called an attached growth membrane system.

In conventional wastewater facilities, biological nutrients such as dissolved organic carbon molecules and ammonia are removed from water by bacteria which metabolise, or “consume”, these compounds. These bacteria are usually found in the water itself, and aerators submerged in tanks encourage them to multiply and form a ‘biomass’, known as activated sludge,  that digests the organic pollutants in the water stream.

The disadvantage of such systems is that in order to sustain the submerged bacteria, the aerators require the use of energy-guzzling pumps to provide dissolved oxygen into the liquid. Also, before water enters these tanks, it has to be stripped of any oil and grease, as these elements substantially limit the amount of oxygen dissolved into the tanks, suffocating the working bacteria.

Magic’s in the membrane suspended in the air

The alternative product developed by BioGill is an attached growth media bioreactor, which is placed above ground next to or above a treatment tank. The difference between this technology and conventional systems lies in the composition of the patented Nano-ceramic membrane and the structure of the bioreactor system.

According to Mikael Krogh, managing director of BioGill Asia, the BioGills are “five-star accommodation for bacteria, with free access to air and nutrition”.

These special membranes, originally developed by the Australian Nuclear Science and Technology Organisation (ANSTO) in the early 2000s as a way to speed up the growth of Penicillium fungus, not only support the growth of bacteria, but also allow microbes to move through the membrane.

ANSTO’s membranes were discovered by BioGill’s founder John West at a science convention in 2007, after which he purchased the license to use them for water treatment in 2009, and took over the full intellectual property rights to the technology in 2012. This is also when he began to commercialise the product.

There are just two main components in the BioGill bioreactor: a ‘gill structure’, which is a set of membranes folded into a loop and a low-pressure water pump, which takes water from a treatment tank up to the top of the BioGill and disperses it over the membranes.

Water sprays over the top of the membranes and propelled by nothing but gravity, travels down over them.Bacteria in the water clump together, adhere to, and grow on the membrane, and after about six weeks, form a stable body of biomass that can digest nutrients rapidly.

Microorganisms growing on the gills are able to feed off nutrients in the liquid stream on one side of the gill while drawing oxygen from the opposite side.

This process of passing liquid over the membranes continues until the water in the tank has reached the desired level of treatment, then it moves onto the next stage of treatment and the tank is filled with a new batch of water. Alternatively, the treatment system can be configured in a continual flow design.

Because the membranes are not submerged in the wastewater, air is able to flow through the unit freely, providing oxygen for the biomass to thrive. This eliminates the need for mechanical aeration, which reduces the energy footprint of the technology by up to 80 per cent, says Krogh, who heads the company’s Singapore office, set up earlier this year. 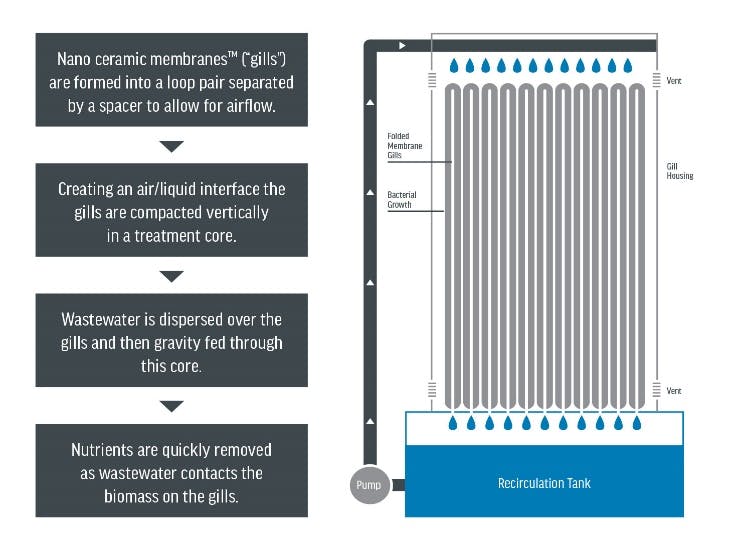 Thanks to the abundance of oxygen, bacteria are not suffocated by oil and grease, and the system removes odour, despite being located above ground, he adds.

Unlike most attached growth technologies, BioGill systems are capable of dealing with water that may otherwise be considered too difficult to treat.

BioGill is able to achieve  this because the technology offers a unique method of delivering oxygen and nutrients to the biomass, which allows it to treat wastewater with higher levels of organic compounds.

This is in contrast to conventional systems, where limited access to oxygen restricts how much nutrient content the submerged biomass can treat, explains Krogh.

These qualities make the BioGill bioreactor ideal for a number of applications ranging from treating industrial wastewater, to helping the aquaculture industry provide a clean and healthy living environment for their stock, notes Krogh.

One product, many applications

According to Krogh, in the food and beverage sector, commercial kitchens typically have to invest in expensive and troublesome grease traps before they are allowed to discharge wastewater into the sewage system, but using the BioGill system allows firms to meet regulations on fat, oil, and grease removal with much less cost and effort.

It’s easy to operate, has low energy costs, and multiple areas of application. We are excited to help address Asia’s sustainable development challenges through our product.

Commercial kitchens, as well as high sugar food production facilities, dairies, and breweries are ideal examples where BioGill bioreactors can save operators a lot of cost and effort, he notes.

A multinational confectionary company is among BioGill’s biggest food clients, and the company also has a 48-unit installation at a juice processing plant and a smaller set-up at a dairy in New South Wales, Australia.

Units are also successfully treating wastewater at fast food restaurants, wineries, and meat and vegetable processing facilities across the world.

BioGill reactors can also help with sanitation in areas which cannot connect to the main sewer network, says Krogh.

For example, the technology helped an eco-resort on Fiji’s Mantaray Island, cope with increased sewage output in a sustainable way.

In 2013, the resort needed to scale up its ability to treat wastewater from the hotel kitchens and sewage treatment capabilities because an expansion of the resort was underway. Two BioGill bioreactors were installed to meet these requirements.

The modules reduced the amount of organic compounds in the water by 96 per cent and nitrogen by 70 percent, producing water for irrigation of the resort grounds.

The resort manager also reported that because of this, no wastewater had been discharged into the ocean, protecting the island’s natural assets.

When retrofitted into existing sewage plants, the technology can improve struggling or aging facilities to improve their performance, notes Krogh.

In the Philippines’ capital Manila for example, four BioGill bireactors were installed at a decentralised sewage treatment plant run by the local urban water authorities, who wanted to reduce power consumption. Thanks to the units, the facility manager was able to  reduce energy consumption by about 80 per cent, yielding annual energy savings of about US$17,672.

Turning to the potential of the technology to boost food security in Asia, Krogh shares that the region’s increasingly affluent middle class is driving demand for high value protein.

“The only sustainable way to meet this demand is to grow fish,” he says, adding that cattle farming is heavily resource intensive and often entails deforestation for ranches, while wild fishing represents a serious threat to marine ecosystems.

On the other hand, by ensuring good water quality,  fish and shrimp farmers can increase stocking levels and produce healthier and higher yields, he notes, adding that BioGill can help fish farmers achieve these objectives.

“Visiting fish and shrimp farms in Singapore, Thailand, Vietnam and Malaysia it’s impressive to see the daily care, attention and hard work that goes into growing the fish and shrimp we eat. Using our technology in aquaculture is a very exciting step in the future of BioGill,” says Krogh.

Regardless of the industry, the process of installing and operating the bioreactor is virtually the same, requiring low and easy maintenance notes Krogh. Customers inform BioGill of the nutrient composition of the wastewater and the desired outcome.

This information allows BioGill to calculate the number of units required, and then all clients need to do is plug them in and wait for about six weeks for the biomass to grow.

Since it was founded, BioGill has sold about 200 units to clients from a variety of industries in 17 countries including Australia, Canada, Chile, India, Taiwan and Singapore. The company also has a sales office in Singapore, and intends to open a new assembly hub in Shanghai in 2016.

Decentralised sewage, aquaculture and treating the food industry’s wastewater are some of the known applications of BioGill, but the company is constantly discovering new uses for the product and is involved in several studies to test these, shares Krogh.

One new initiative with Singapore Polytechnic is assessing the potential of BioGill bioreactors to remove oil and other hydrocarbons from the surface of seawater in ports, while another trial at a floating fish farm in Singapore explores the use of the system in closed fish cages in the ocean.

As the company consolidates its presence in the region and looks for new distributors for its product, Krogh is optimistic about the system’s potential to not only serve as an energy-efficient wastewater treatment alternative, but also to promote sanitation and food security.

“It’s easy to operate, has low energy costs, and multiple areas of application,” he says. “We are excited to help address Asia’s sustainable development challenges through our product.”