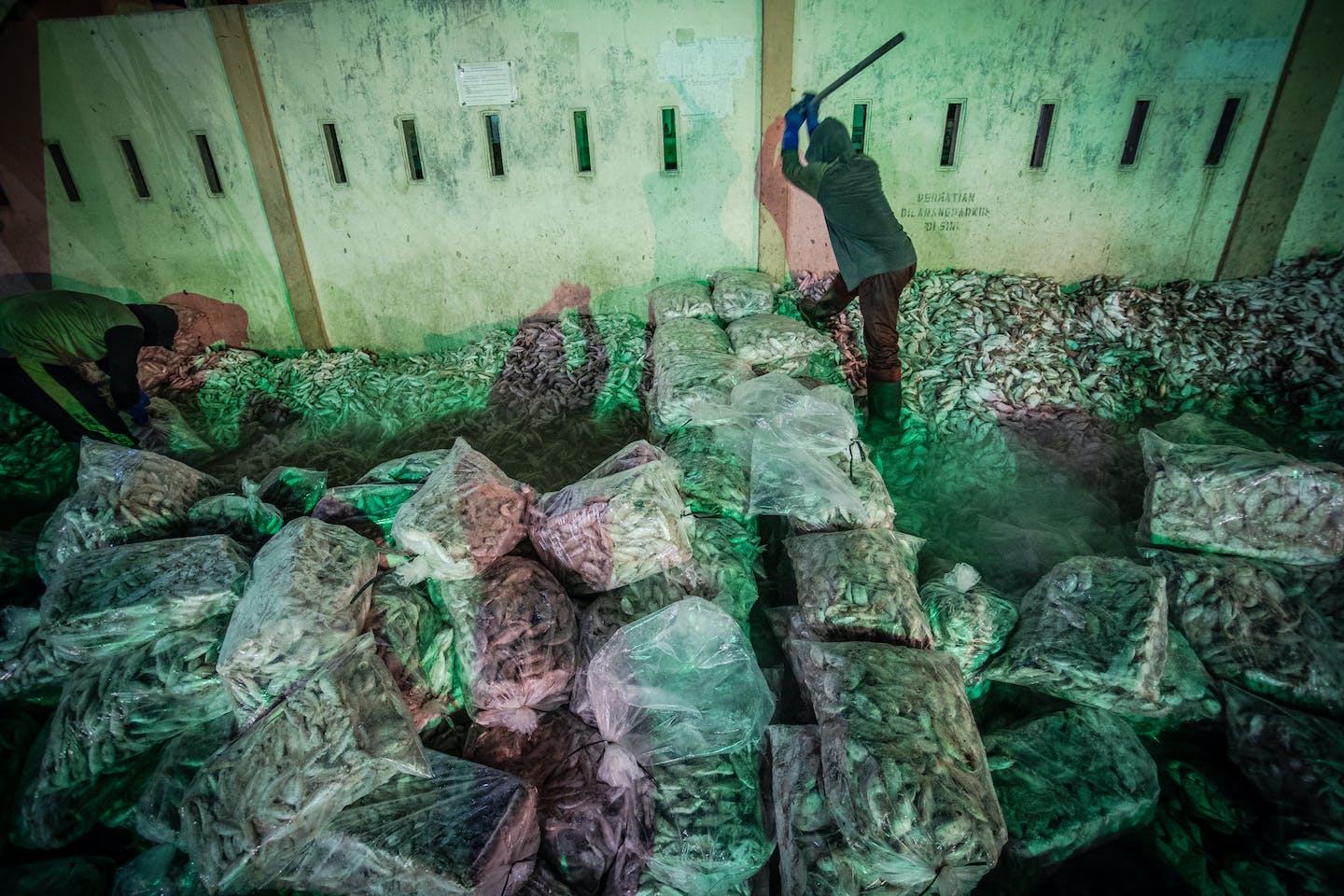 For nearly six months aboard the Han Rong 355, a Chinese fishing vessel, Kukuh and other migrant fishermen drank, cooked and showered from the water that came out of an air-conditioner.

A couple of the workers died from consuming the contaminated food and water, but according to Kukoh, the boat captain’s response would always be the same: “It’s okay to die, as long as the family gets money from us.”

His story is just one of the many documented by non-government organisation Greenpeace, which has released a video and report that document the forced labour conditions and human rights abuses that Southeast Asian migrant fishers face while plying the high seas.

“Despite national policies to protect migrant workers and international treaties on fisheries management, it is unthinkable that modern slavery continues to thrive within the fishing industry,” said Arifsyah Nasution, Oceans Campaigner for Greenpeace Southeast Asia. “One migrant fisher suffering is one too many.”

While technological advances have improved the state of fisheries and fish production, migrant fishers worldwide lag behind significantly compared to other occupations in terms of being afforded basic human and labour rights, the report stated.

With help from Indonesian migrant workers union, Serikat Buruh Migran Indonesia (SBMI), Greenpeace gathers testimonies from Kukoh and other Indonesian fishermen, who find themselves trapped in slave-like conditions in their attempt to escape poverty back home. Men from Indonesia and the Philippines make up the bulk of the migrant fishers who endure gruelling work and physical abuse just to eke out a living.

“I witnessed horrible torture. We were working even late at night. When the fishing master was angry, he hit my friend’s head near his left ear. After that he was forced to continue working until the work was finished and only
then was he allowed to rest,” recalled Mr. D, 28 years old, a former crew on Taiwanese vessel Da Wang, who found his friend dead in his room the next morning.

According to the Taiwan Fisheries Agency, close to 22,000 migrant fishers from Indonesia and 7,730 from the Philippines reportedly work on board Taiwanese distant water fishing vessels, or longliners, which altogether make up a US$2 billion industry.

“I witnessed horrible torture. We were working even late at night.”

Taiwan owns the second largest distant water fishing fleet after China, who along with Japan, Spain and South Korea, account for more than 85 per cent of observed fishing on the high seas beyond their territorial waters.

Worldwide, overfishing has caused global fish stocks to dwindle, forcing vessels to fish further and further out to sea. Far from the reach of the law, vessel captains can rule with impunity, which increases the vulnerability of migrant fishers to abuse and exploitation.

According to Greenpeace, isolation in the remote sea for long periods of time makes escape difficult and often impossible. The fate of migrant fishers are precarious because the crimes they allege that were committed against them happen far away from the scrutiny of regulators who might secure their protection and safety. 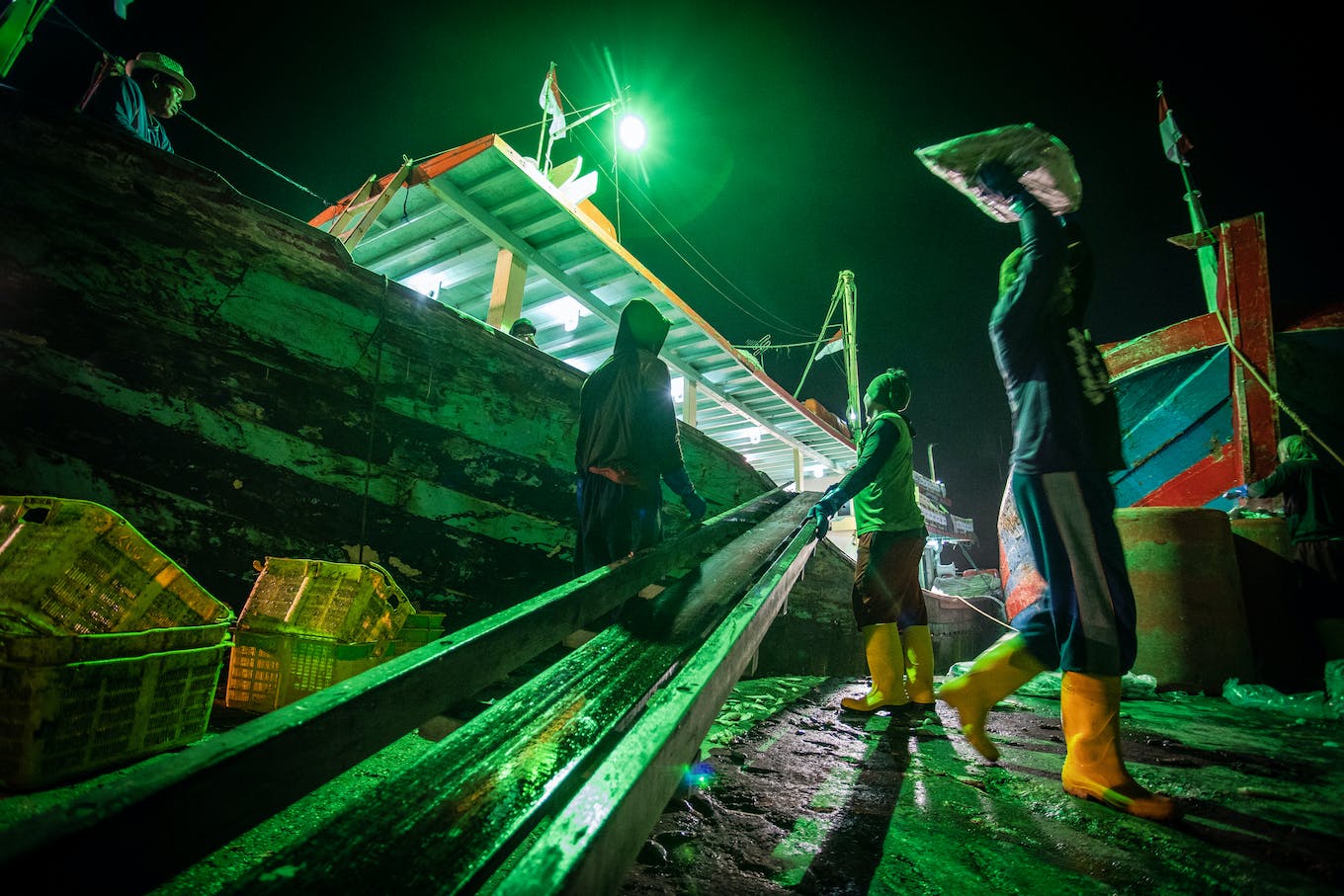 Fisherman unload the catches from troll ship at Tegal port, Central Java. Fishing is one of the main livelihoods for people living in the North Coast area of Java. Image: Greenpeace

While the report focuses on labour violations on board 13 distant water fishing vessels, including eight longliners, Greenpeace notes that poorly managed vessels can be engaged in illegal, unreported and unregulated (IUU) fishing, which is a threat to endangered marine species.

Other than labour violations, the report highlights that illegal fishing and overfishing deprives countries of their fishery resources and leads to the collapse of wild fish populations. Globally, about 33 per cent of fish stocks are already fished beyond sustainable limits while an estimated 60 per cent are on the brink of collapse or fished to maximum sustainable limits, Greenpeace has found.

“The work started at noon and you worked until 4 or 5 in the morning. You keep looking for fish—tunas, marlins, sharks—but the shark has its fins cut off and the body thrown overboard,” said Karmanto, a former migrant fisher. “Whatever the fish, you must catch it.”

Sharks fin is a blood-soaked delicacy in China and parts of Southeast Asia, and high demand for it has led to the decimation of global shark populations.

In a 2018 report, the London-based Environmental Justice Foundation (EJF) exposed the prevalence of illegal shark finning and capture of protected species including dolphins, whales and turtles on Taiwan-linked longliners. The EFJ similarly released a video that outlined the human rights abuses on board the same vessels that engaged in illegal fishing, including verbal threats, salary deductions, excessive overtime and physical abuse.

“This enables vessels to operate in collapsed fisheries that would otherwise be economically unviable, leading to a vicious cycle among overfishing, illegal fishing and slave labour,” he said.

“We see many crews from Indonesia becoming the victims. This is what made us realise there is an actual connection between illegal fishing practices and slavery at sea,” echoed Nasution.

“This is not just happening in one country but this is related to organised crime, a very systematic crime committed by many actors, in many countries,” he said.