Why CEOs need to become activists in sustainability

Digital opinion analysis points to a demand from consumers for CEOs to take a stand on social issues of global implication. Could this signal a new age of a ‘race to the top’ in corporate sustainability commitments? Clarissa Watson writes.

As the world becomes increasingly politically polarised and some governments abandon sustainable initiatives, like US President Donald Trump’s announcement to pull out of the Paris Agreement in 2017, consumers are now looking towards CEOs and their companies to spearhead sustainability.

During the last quarter of 2017, our company, Alto Data Analytics, which specialises in public opinion analysis using big data and artificial intelligence, conducted an analysis of digital opinions to understand what sustainability means to the American public. The analysis focused on the main challenges consumers expect CEOs to confront, as well which companies are currently setting the bar in sustainable practices. Alto Data Analytics collected 72 million data points from 3.2 million comments and 1.7 million interactions created by 1.3 million authors across Twitter, Instagram, Facebook, Reddit, forums, blogs, news and other digital sources in English and Spanish.

We identified emerging narratives by connecting the topics authors discussed simultaneously and with a high frequency, as part of their spontaneous digital conversations. We spotted five key emerging narratives and themes of public interest: climate change, renewable energies, zero waste, environmental impact by consumption and UN Sustainable Development Goals. Climate Change is top of mind, capturing 39 per cent of the conversation, along with another 33 adjacent themes. 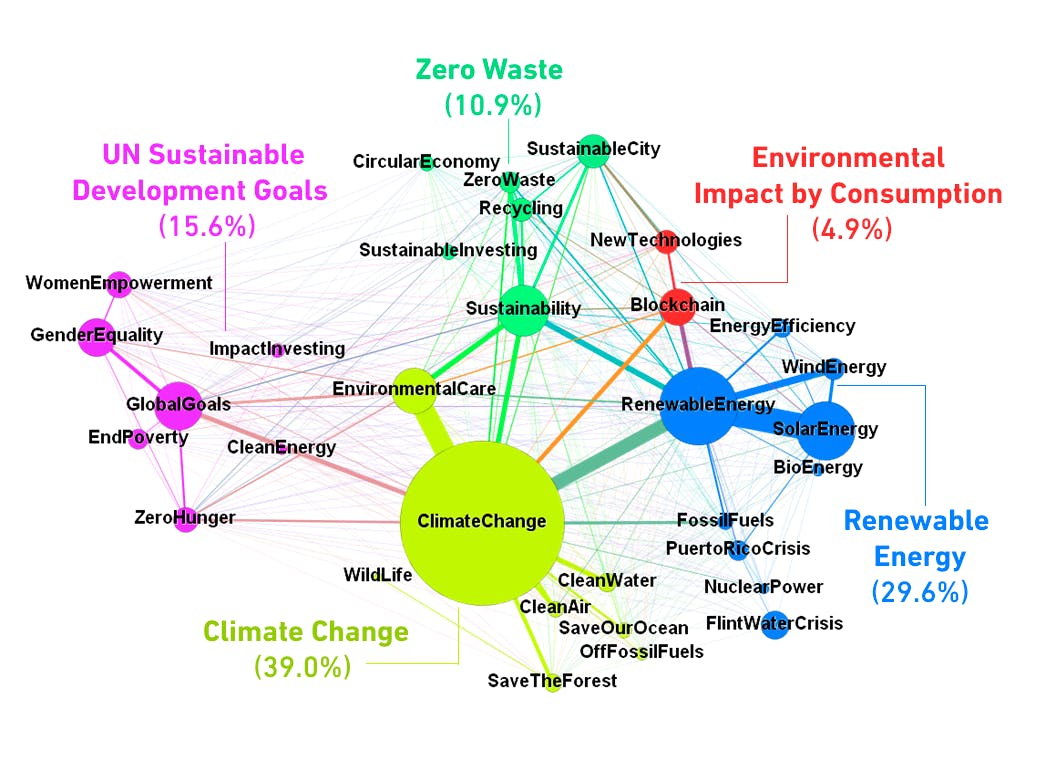 The interconnection of the key themes revealed adjacent narratives such as gender, hunger, sustainable cities, the circular economy and how blockchain technology is impacting the environment. The data visualisation shows zero waste is closely connected with the discussion around sustainable cities, the circular economy, sustainable investing and how blockchain is related to renewable energies in the context of technological impact.

Consumers are turning to CEOs in search of leaders that not only provide long-term commitments, but leaders who push their brands to catalyse consumers and other brands in new and collaborative ways.

By analysing the digital footprint of authors, visual representations show how authors cluster in distinct communities and which authors have more influence. Authors are represented as nodes (i.e. profiles) of consumers, political organisations and brands.

The network visualisation below connects the 758,040 most active authors through their 1,663,078 interactions in the form of re-tweets and replies within the public debate on sustainability. Our data shows that the conversation on sustainability is highly polarised. The blue community shows a tendency of nodes to cluster around politicised themes, driven by politicians and celebrity campaigning. This community represents 60.3 per cent of all authors mostly focused on Trump, Bernie Sanders and the Flint clean water crisis. The second community, shown in yellow and smaller in size, represents 19.9 per cent of authors who focus on a non-political debate, including those from the private sector, around the key five themes previously identified. 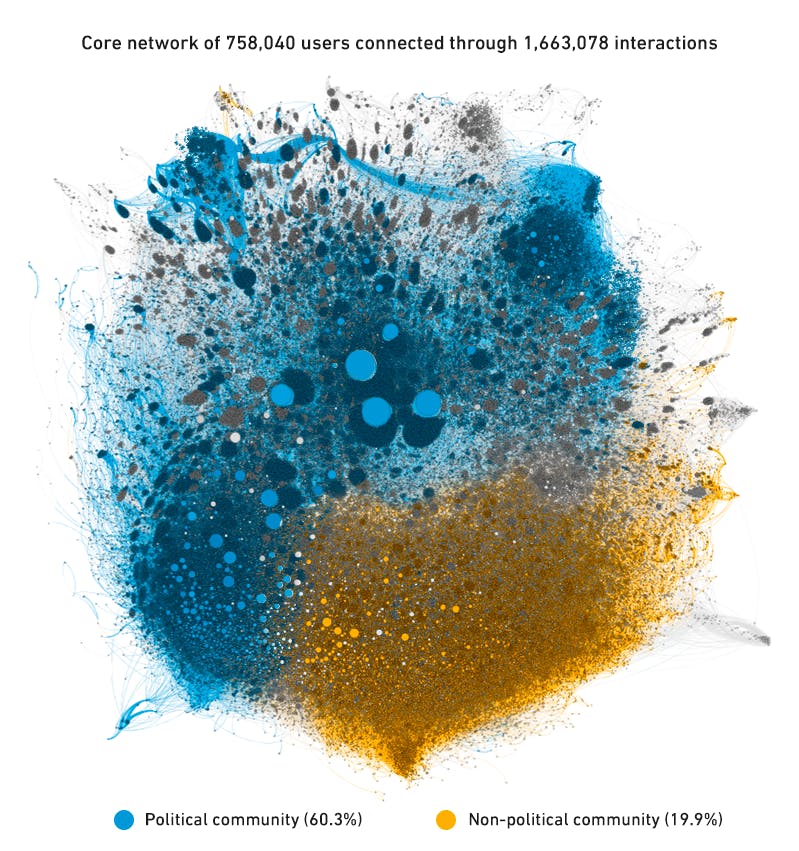 The analysis shows how some of the most influential nodes in the non-politicised community are consumer brands, with tech companies leading the way. By analysing what brands and initiatives are most mentioned in relation to sustainable practices, we discovered six key areas of consumer interest: Renewable Energies, Zero Waste, Sustainable Production, Save the Ocean, Protect the Forest and Clean the Rivers

Consumers’ minds are being shaped primarily by tech companies investing in renewable energies directly connected to their businesses and the idea of the circular economy. Tesla, Amazon, Google, Microsoft, General Electric, Apple, Intel and Sony are amongst the top mentioned brands related to sustainable practices.

Qualitative research also uncovered that consumers highly value CEOs who publicly endorse their company’s sustainability plans and actively join the digital debate. Initiatives that received high visibility in our analysis were Tesla’s use of their solar panels and batteries to restore electricity at San Juan’s children’s hospital after Huracan Maria and Pepsi’s zero-waste strategy with programmes to educate and encourage students to recycle.

Consumers are turning to CEOs in search of leaders that not only provide long-term commitments, but leaders who push their brands to catalyse consumers and other brands in new and collaborative ways. The top example from our research was Coca-Cola’s “Clean Coast Week” in Ireland, which had a strong digital echo in the US. Coca-Cola raised awareness of the importance of protecting our coastline, encouraged more coastal clean-ups around the country and facilitated, through digital media, the recruitment of volunteers to clean their local beaches.

What makes an activist CEO?

Our research shows companies in the tech sector are already leading sustainability—through renewable energies and zero-waste models of production—and are shaping consumers’ minds on how technology companies approach sustainability. Forty-two per cent of the 80 most influential company profiles were from the tech sector and three of the five of the top companies ranked to be most sustainable by public opinion were tech companies: Amazon, Microsoft and Google. 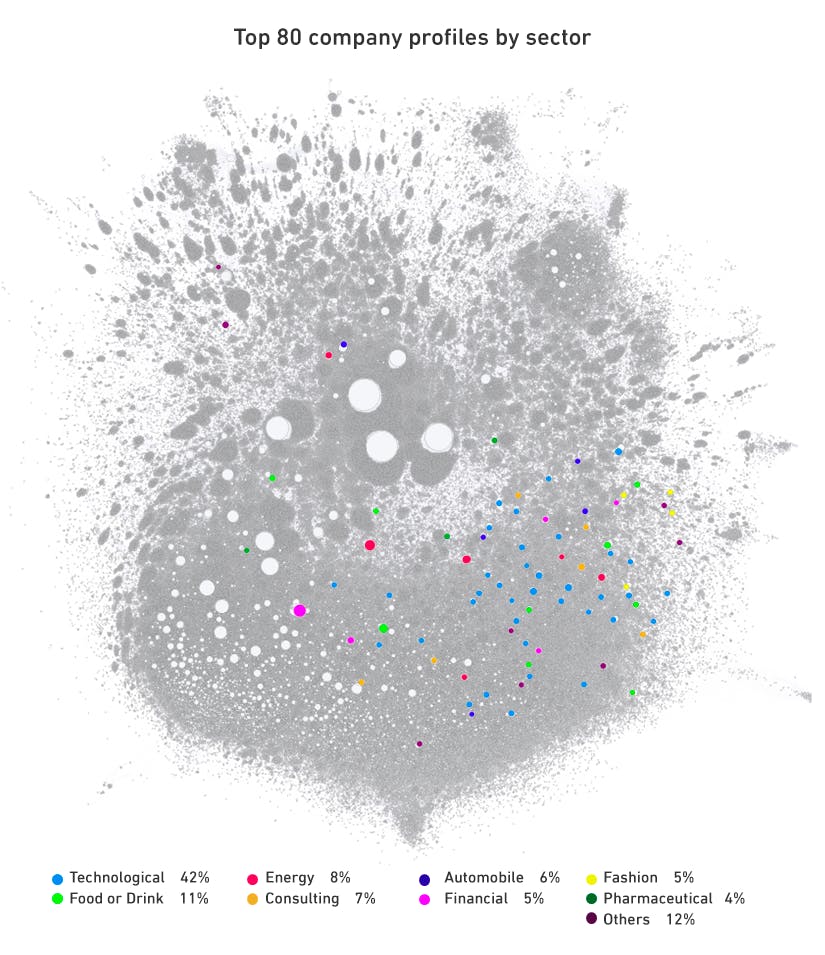 Consumers expect companies to publicly lead the debate with both short-term and present strategies that deliver with long-term commitment. As demonstrated in the case of Starbucks, consumers pay attention to follow through and highly value tangible initiatives catalysing consumer and other brands actions.

CEOs must actively join the public discussion. Consumers expect CEOs to prioritise sustainability in their business’ operations, as our analysis shows. They need role models and leaders to fill the vacuum sometimes left by governments. There is a clear opportunity for CEOs to take responsibility and join the public debate on sustainability.

Clarissa Watson is Head of Marketing at Alto Data Analytics, a big data and advanced analytics firm specialising in the analysis of public opinion. This article was originally republished on the World Economic Forum and featured as a blog on the on Alto’s website.