Developing countries that have contributed the least to climate change are suffering the most from it, and the damage is escalating. Closer scrutiny of how climate finance gets from donors to projects is needed.

After another year of record-breaking temperatures and extreme weather disasters, wealthy countries are under pressure to make good on their commitment to mobilise US$100 billion a year to help poorer countries deal with climate change.

Developed countries now project that they won’t meet that pledge until 2023 – three years late and still woefully short of the real need.

A report due February 28 from the Intergovernmental Panel on Climate Change is expected to provide more evidence of what billions of people are facing: Developing countries that have contributed the least to climate change are suffering the most from it, and the damage is escalating.

Small island states and low-lying coastal areas are losing land to rising seas. Flooding from extreme storms is wiping out people’s livelihoods in Africa and Asia. Heat waves are harming people who have no access to cooling, killing crops and affecting marine life communities rely on. Documents from the United Nations suggest that the cost for low-income countries to adapt to these and other climate impacts far exceeds the promised $100 billion a year.

What’s less clear is how much impact the climate finance already flowing to these countries, estimated at $79.6 billion in 2019, is having. There is an overwhelming lack of data, as well as evidence that countries have been supporting projects that could harm the climate with money they count as “climate finance.”

Part of the problem is how that money gets from donors to projects in countries in need. I have worked closely with developing countries seeking help to deal with climate change. I believe that by paying closer attention to the strengths and weaknesses of climate finance delivery channels and matching them to countries’ needs, the international community can make a real difference in the fight against climate change. 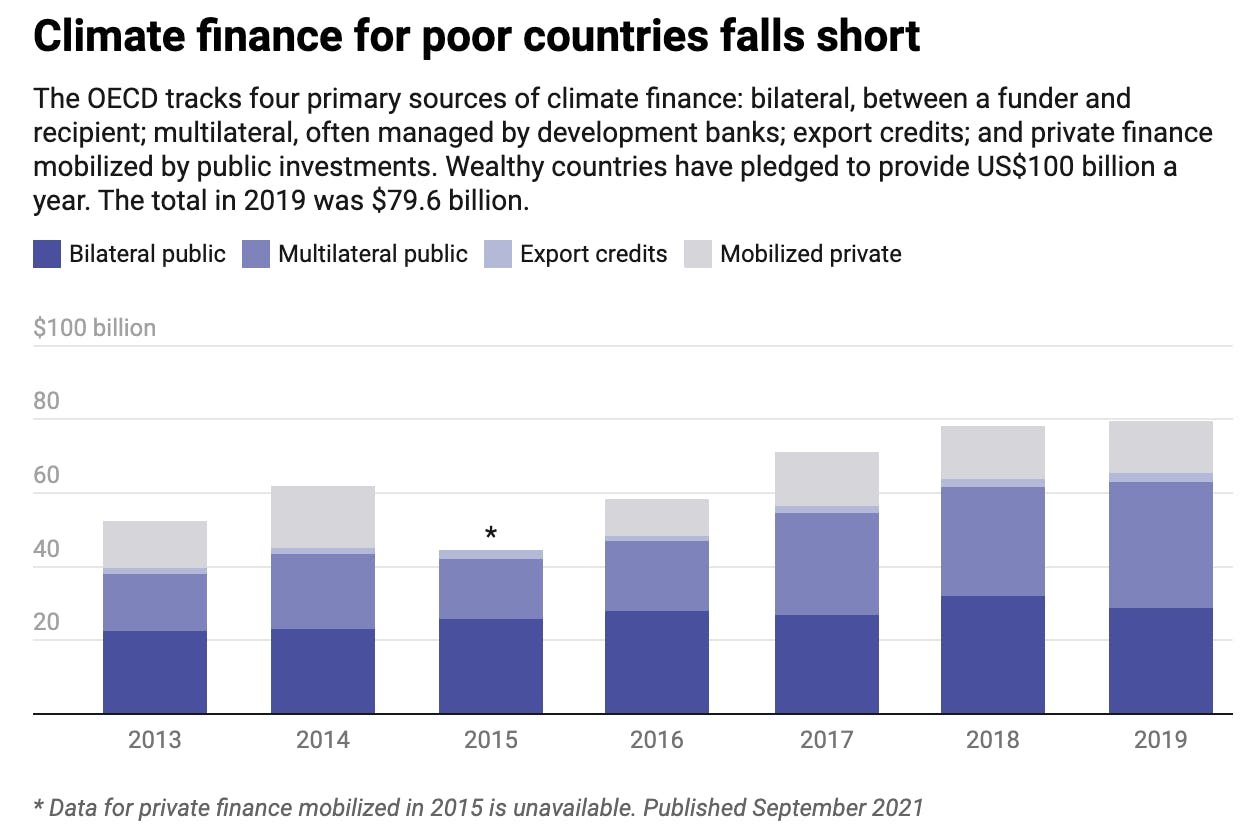 How does climate finance flow?

Donor countries have three major channels through which they can route climate finance: bilateral agreements between small groups of countries, international funds like the Green Climate Fund and development banks like the World Bank. Each has benefits and drawbacks.

For example, at the Glasgow climate conference in November 2021, South Africa and a group of donor countries announced an $8.5 billion effort to help South Africa transition away from coal while increasing renewable energy generation. This deal allowed four national governments and the European Union to come together and craft a package around what South Africa wanted.

Groups of donors have also come together to support national-level financing, though new research suggests these arrangements are underused.

A major drawback of bilateral arrangements is that they can be sensitive to the ebbs and flows of political attention. While issues in the news can attract funding, some countries struggle to get help.

Climate funds: It is precisely to ensure that countries have regular and consistent access to climate finance that a second option exists: international climate funds.

For example, the U.N.-backed Green Climate Fund is one of the largest and offers universal eligibility. The GCF’s scope is also deliberately broad to allow room for programming based on what countries actually need, rather than what is politically attractive at any given moment.

However, the GCF has received pledges totaling only about $18 billion. Developed countries are more likely to route contributions through their own bilateral channels or major development banks than through climate-focused funds.

First, many of these banks have not ambitiously incorporated climate change into their programming. In fact, some came under scrutiny when their joint statement at the Glasgow climate conference did not include specific targets and timetables for ending financing for fossil fuel projects.

Second, most development banks have not been able to effectively mobilize finance from the private sector, in part because of their business models. Development banks tend to prefer projects with lower risk and like to operate in settings where the cost of doing business is not very high. Private-sector funding is crucial to filling the climate finance gap, which means that development banks also need to use instruments that are better able to mobilize private capital such as equity instead of relying too heavily on lending.

Ultimately, splitting climate finance across these different channels is helping to render financing largely ineffective, with developing countries receiving a fraction of the resources necessary to make an impact. Spreading finance thinly across delivery channels means the international community is neither learning from experimentation nor betting on bold ideas.

Getting serious about impact

Currently, the efforts to track the $100 billion are focused on counting how much money has actually flowed and where, not what impact has been achieved. Two key issues are complicating efforts to measure the impact.

First, there is no agreed-upon definition of what climate finance is, and countries use their own definitions. For example, in the past Japan counted money for new coal plants that are more efficient than old ones, but still highly polluting, as “climate finance.”

Second, some projects focus on helping countries put in place plans and policies. For example, countries have been receiving support to create national adaptation plans. The impact of these planning efforts really relies on how well the plans are implemented.

If the global community is serious about rising to the climate challenge, I believe the conversation needs to move forward in three ways:

1) The scale of financing should far surpass $100 billion.

2) The international community should be more targeted about which sources and channels best meet specific needs.

3) More research is needed to assess the impact of international climate finance so far and establish a sound understanding of which delivery channels work best for which purposes.

The $100 billion in promised funding is much-needed glue that helps hold the U.N. climate process together – it reflects the responsibility borne by countries that have been emitting greenhouse gases for years for driving climate change and the harm to countries that emit little.

This story first appeared in The Conversation.