As the 2022 United Nations Ocean Conference (UNOC) came to a close last week, I found myself filled with a curious mix of disappointment and cautious optimism. I had arrived in Lisbon, Portugal as a youth delegate hopeful to see a firm global commitment to marine protection, but instead experienced a wave of contradiction.

The week-long conference, delayed since 2020 due to the Covid-19 pandemic, sought to secure solutions for Sustainable Development Goal 14, life below water. All 193 member states unanimously adopted a political declaration renewing their commitment to strengthen ocean protection.

“We are committed to halting and reversing the decline in the health of the ocean’s ecosystems,” read the declaration. Among other goals, member states agreed to strengthen data collection efforts, promote financing for nature-based solutions, as well as recognise the important role of indigenous knowledge.

A UN declaration has no legal force. While the commitments listed in the document may seem comprehensive, they have no real enforcing mechanism. The document also does not detail specific targets or policies that states should implement.

To be fair, a legal treaty was never on the table for UNOC 2022. That’s reserved for August, when Singapore will lead negotiations for a new legally binding instrument on ocean governance, known as the BBNJ Treaty or “Treaty of the High Seas”. Instead, UNOC was positioned as a platform for countries to reaffirm the need for more urgent action, which they did. The declaration, at the very least, gives civil society something to hold their leaders accountable to.

There are other small — but nonetheless significant — reasons to celebrate.

For one, a number of countries are ramping up their marine protection targets. Colombia announced the creation of four new marine protected areas, making it the first nation globally to achieve its 30 by 30 commitment — eight years before the 2030 deadline.

The 30 by 30 initiative seeks to designate 30 per cent of the world’s land and ocean as protected areas by 2030.

Furthermore, the Protecting Our Planet Challenge, a coalition of philanthropic organisations, committed to invest at least $1 billion to marine protection by 2030.

SDG 14 is the most underfunded of all 17 sustainable development goals, but the new funding could help turn the tide. According to the Challenge, this single commitment is roughly equal to all the philanthropic giving for marine protection over the past decade, therefore “putting ambitious ocean conservation goals within reach”.

Youth also scored a victory at UNOC: a promise that they will be more included in the international governance process moving forward. 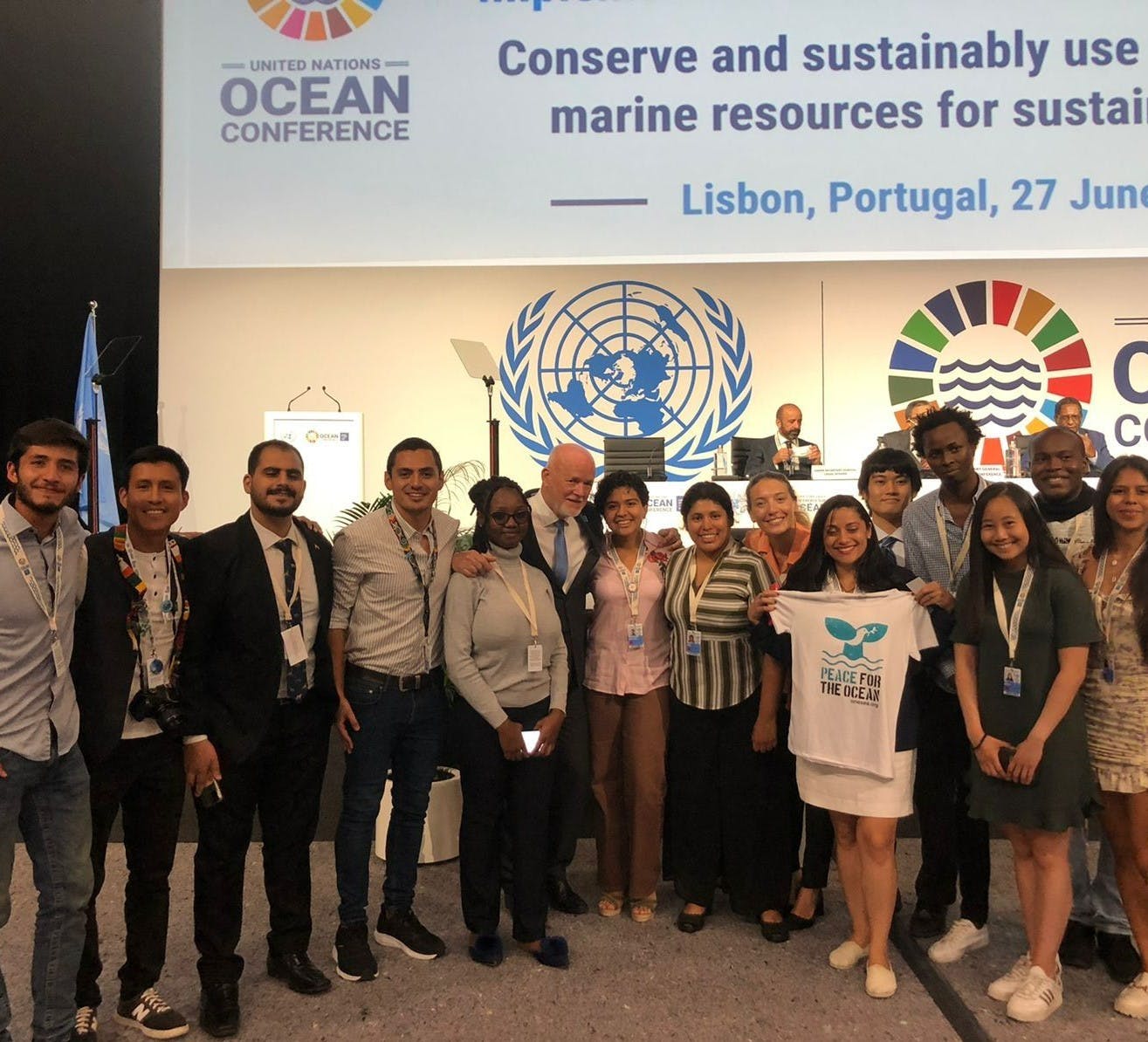 Youth delegates with Mr Peter Thomson (sixth from left), UN Special Envoy for the Ocean, on the plenary floor.

“Henceforth, youth will no longer be sitting on the edge of conferences. It’s their future we’re deciding about,” said Peter Thomson, UN Special Envoy for the Ocean, at the closing plenary. His statement drew loud cheers and applause from the back of the room, where many of us youth delegates were seated.

“From now, we have to bring suitably qualified youth professionals into the central table to make those decisions together with us,” he added. He will be pushing for these changes at the UN High-level Political Forum on Sustainable Development (HLPF), taking place in New York this week.

Thomson’s statement could give young people around the world the leverage we need to be more meaningfully engaged in decision-making — for instance, by being formally included in national delegations alongside government representatives, rather than only attending conferences as observers.

Despite these positive developments, major roadblocks remain ahead.

Deep sea-mining emerged as one of the most contentious issues at UNOC, with no consensus in sight by the end of the week. Pacific Island nations including Fiji and Palau, along with civil society stakeholders, collectively called for a moratorium, saying seabed mining would “compromise the integrity of our ocean habitat”.

The International Seabed Authority (ISA), the UN body for governing the seabed, has to draw up regulations for DSM by July 2023. Commercial extraction activities could begin soon after this date. This means we have a year to fight for a moratorium, said activists present at UNOC.

The calls for change did not go unnoticed.

“We must give due and serious consideration to the plea to impose a moratorium on deep-sea mining, as we seek to understand its potential ecological ramifications,” said Keriako Tobiko, Kenya’s Cabinet Secretary for the Ministry of Environment and Forestry, at the closing plenary.

Acknowledging these concerns, however, is not the same as accounting for them. Even as all member states reaffirmed their commitments to SDG 14, it appears that more countries remain in favour of DSM than against. These include China, Japan, South Korea, Nauru, Russia, and Singapore.

Existing commitments will only reduce plastic pollution by 7 per cent.

Another major threat to our oceans is plastic pollution. Policymakers at the conference stressed that negotiations will soon begin on a legally binding global plastics treaty, which they hope can be completed by the end of 2024.

The treaty was widely perceived as a major win for the environment, and will play an important role in encouraging member states to set stronger policies to tackle plastic waste. But why is the world waiting until there is an international framework in place to accelerate action? According to Jo Royle, founder of social enterprise Common Seas, existing commitments made by countries will reduce plastic pollution by a mere 7 per cent. Surely this points to room for more urgent and ambitious action — not two years later, but now.

By diverting attention to upcoming instruments such as the BBNJ and plastic treaty, it almost seems like a tactic for member states to delay urgent action.

In his closing remarks, UN Under-Secretary-General for Legal Affairs Mr Miguel de Serpa Soares declared the conference an “enormous success”. But was it really?

Overall, the UN Ocean Conference appeared to be a platform of contradictions and even hypocrisy. The conference concluded with the recognition that we need to do more, and faster. Yet countries’ actions do not reflect their words.

We are offering support to developing countries, said Japan, despite the country’s plans to discharge radioactive waste into the Pacific Ocean, near small island developing states such as the Marshall Islands and Fiji.

We need to urgently scale up actions to protect the ocean, said Singapore, even as it affirmed its support for deep sea mining.

Until countries take a firm stance against ecological destruction, all 17 SDGs, not just Goal 14, will remain out of reach.

No doubt, there were several new commitments made at UNOC. The two international agreements currently still under negotiation will also provide a critical framework to demand accountability from governments. But let’s not wait for these instruments to come into force before we start doing the right thing.

Civil society leaders have made their demands clear: To make ecocide — the mass damage and destruction of ecosystems — an international crime; ensure that the plastics treaty covers the full life cycle of plastics, not just end-of-life waste management; stop deep sea mining until more is known about its impacts.

Simply acknowledging these demands is not enough. Our leaders need to act on them too.