Would a global plastic treaty solve plastic pollution in Asia?

That depends on whether the region has an important seat at the treaty’s negotiating table, say experts at the World Oceans Summit.

Annupa Ahi, who is Tomra’s vice president and head of public affairs, said, “If we want to make so much as a dent [in the global plastic problem], we have to solve Asia’s problems first and foremost. We shouldn’t just be in the centre [of the discussions]. We should be leading, and it’s up to the Asian leaders to take it upon themselves to lead the discussion.”

She was speaking on a panel at the World Ocean Summit Asia-Pacific (APAC), which was held in Singapore in November last year. The topic of discussion was on APAC’s role in negotiating the global plastics treaty and whether the agreement would adequately respond to the region’s plastic pollution problem. According to the World Bank, half of the top 10 marine plastic waste producing countries are located in Southeast Asia.

The global treaty she referenced is the landmark resolution to end plastic pollution achieved at the UN Environment Assembly (UNEA-5) in Nairobi in March 2022, where officials from more than 160 UN member states agreed to negotiate a legally binding treaty which will address the full lifecycle of plastics by 2024. 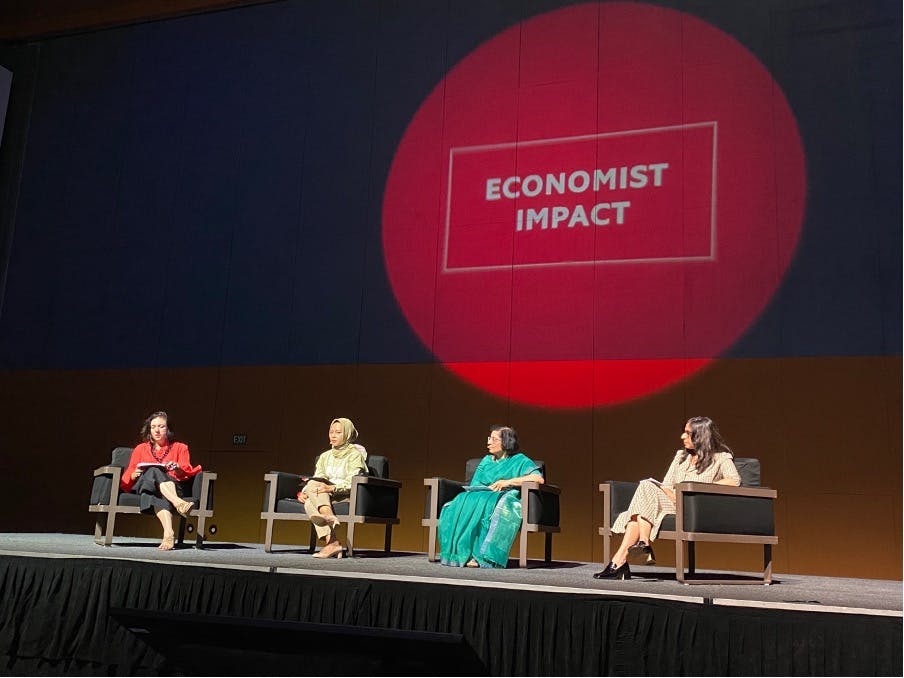 Panelists were divided over whether APAC countries were currently on track to fulfil their plastic pollution and decarbonisation goals.

Deputy director-general of the Confederation of Indian Industries (CII) Seema Arora believed that India was moving in the right direction, given that it has banned around 20 types of single-use plastics. The country had also announced an ambitious EPR (extended producer responsibility) regime just last year.

Meanwhile, in September 2021, CII also launched the India Plastics Pact – an initiative which aims to transition India’s presently linear plastic disposal system into a circular plastic economy. The aim is to reduce plastic use, enable valuable waste materials to be reused and generate jobs, investment and opportunities in the sector.

Arora said, “The uniqueness of the pact is that it covers the entire value chain – right from the original manufacturer to the recycler.”

However, in transboundary issues like microfibre plastic pollution, the panellists were less positive, especially about the depth of collaboration between key stakeholders.

Joi Danielson, partner of systems change company SYSTEMIQ, said that agencies had to step up and take the lead to facilitate more partnerships.

She said: “You’ve got national governments, different ministries, different roles in the private sector, NGOs, advocacy and social impact groups… but you don’t have the connective tissues between them. Either someone has to play [that role] or the organisations themselves have to step a little out of their comfort zone to change the role they traditionally play for the collaboration to really happen.”

You don’t know who’s to blame for putting plastic in the ocean. It’s everybody’s problem, because the ocean belongs to everybody.

Finally, the panellists generally agreed that a plastics treaty would provide governments, especially those in developing countries, the impetus and leverage required to effect the necessary changes. However, they also emphasised the crucial roles governments, businesses and consumers play in enforcing the treaty’s provisions and ensuring real progress has actually been made.

Many speakers also highlighted how producers can and must do better for the environment by investing more in material research and development, rethinking their existing packaging designs and developing a more sophisticated post-consumer plastic sector.

Dow Packaging and Specialty Plastics’ global sustainability director Zhang Han said, “A circular economy is more than just recycling. We want to maximise the value of each molecule as much as possible throughout [its] whole lifecycle.”

Most importantly, given the severity and complexity of the issue, senior research fellow at the National University of Singapore’s Asia-Pacific Centre for Environmental Law Linda Sulistiawati urged all stakeholders to contribute their fair share in addressing the global plastic pollution issue.

She said, “You don’t know who’s to blame for putting plastic in the ocean. It’s everybody’s problem, because the ocean belongs to everybody.”

‘There is no waste, only resources’: Tomra boss Tove Andersen

The head of the Norwegian company that pioneered reverse vending machines sees discarded plastic not as waste, but as an opportunity in resource revolution.
‘There is no waste, only resources’: Tomra boss Tove Andersen