The world's most powerful consumer goods brands are also the biggest plastic polluters, a global study by environmental groups has found. Meanwhile, the International Energy Agency has projected plastic use to soar, driven by developing Asia's growing appetite for consumers goods.

The world’s most powerful consumer goods brand is also the biggest plastic polluter.

Sugary drinks giant Coca-Cola, a company valued at US$56.4 billion, emerged as by far the most common brand in audits of plastic debris found on beaches and in waterways, parks and streets around the world.

Coke-branded plastic items, which includes the Schweppes, Fanta and Dasani brands the Atlanta-headquartered company owns, were found in 40 of the 42 countries where environmental groups have conducted cleanups and brand audits since September 2016.

PepsiCo and Nestlé, the world’s third and second most powerful consumer goods firms, respectively, were found to be the second and third biggest polluters among the 180,000 pieces of plastic waste collected.

Coke, PepsiCo and Nestlé made up 14 per cent of all the branded plastic pollution found, with major contributions from Danone, Mondelez International, Procter & Gamble, Unilever, Perfetti van Melle, Mars, and Colgate-Palmolive.

Coke, Perfetti van Melle, and Mondelez brands were found to be the biggest plastic polluters in Asia, accounting for 30 per cent of all branded plastic pollution. Audited territories in the region included Hong Kong, Indonesia, Thailand, Vietnam, Australia, the Philippines, South Korea, India and Bangladesh.

By continuing to churn out problematic and unrecyclable throwaway plastic packaging for their products, these companies are guilty of trashing the planet on a massive scale.

The most commonly found form of litter collected was polystyrene followed by polyethylene terephthalate (PET), the material used to make bottles for soft drinks, which is recyclable and has a high value on the market for post-consumer recycled material. 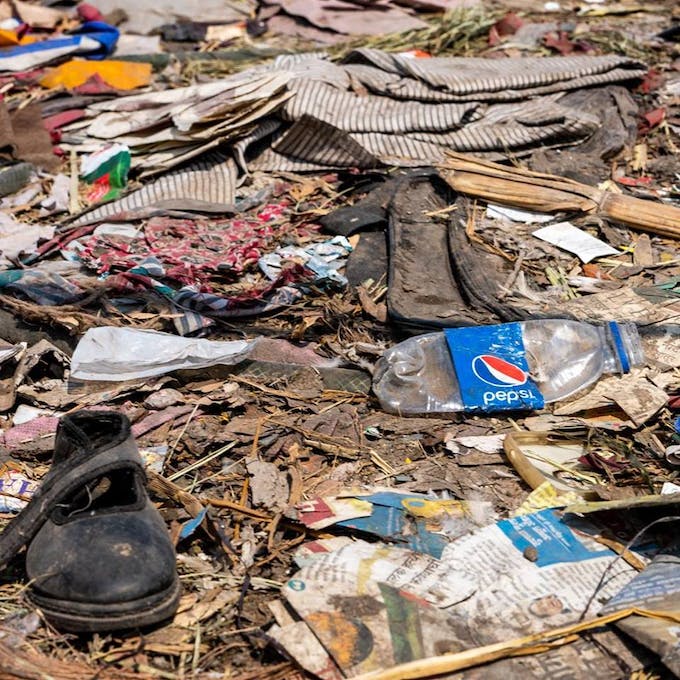 Another commonly found debris type was multi-layered material—a mixture of plastic and other materials bonded in layers—which is almost impossible to recycle in most parts of the world. This is typically used to make potato chip bags, juice pouches, shelf-stable packaging such as Tetrapak cartons, and the one-time use sachets introduced to Asia to enable low-income consumers to afford international personal care and snack brands. PepsiCo, Unilever, Mondelez, and Nestlé topped the list of branded multilayer plastic polluters.

“We pay the price for multinational companies’ reliance on cheap throwaway plastic,” commented Abigail Aguilar, Philippines campaigner for Greenpeace, one of the non-government groups that is part of the Break Free From Plastic campaign. “In the Philippines, we can clean entire beaches and the next day they are just as polluted with plastics.”

The group is calling on consumer goods firms to take responsibility for the full lifecycle of their products and packaging—a business principle known as Extended Producer Responsibility—and for consumers to demand that food, drinks and personal care products are either unpackaged or contained in sustainable packaging, and delivered in systems that cut or eliminate waste.

The audit results emerged the week after Food Industry Asia (FIA), the trade association for the region’s food and beverage industry whose members include Coca-Cola, Nestlé, Mondelēz and Mars, produced research that found that governments’ poor rubbish collection systems were mainly to blame for plastic pollution in Southeast Asia.

The study suggested that reducing plastic packaging and redesigning products for recyclability have minimal impact in cutting the plastic waste that enters the ocean.

The rising tide of plastic consumption is driving oil demand

The Break Free From Plastic study follows a report from the International Energy Agency, released on Saturday, that predicts that global consumption of plastic will continue to rise over the next 15 years, driven by the voracious appetite for consumer goods in the developing world. 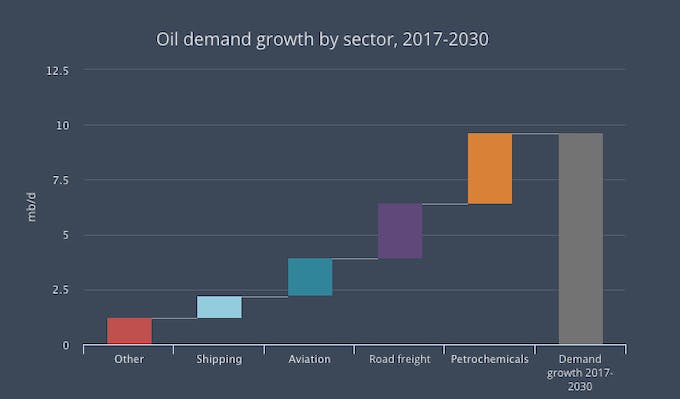 Petrochemicals, which are used to make plastic, are set to account for over a third of the growth in oil demand from 2017 to 2030. Source: OECD/IEA

Driven largely by the rapidly growing consumer economies of Asia—home to the world’s biggest plastic polluting nations, China, Indonesia, Philippines, Thailand, and Vietnam—demand for consumer products will mean that petrochemicals, from which plastics are derived, will account for one third of the growth in oil demand by 2030, and one half by 2050, overtaking oil demand from shipping, road freight and aviation.

Developed countries currently use up to 20 times more plastic per person than developing economies, underscoring the “huge potential” for global growth and the importance of plastic use in low-income countries to the oil and gas industry, the report found. 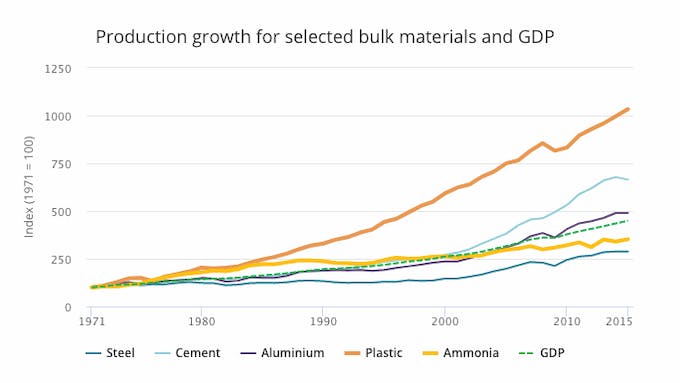 Demand for plastics has outpaced that of other bulk materials and has nearly doubled since 2000. Image: OECD/IEA

Demand for plastics has outpaced all other bulk materials such as steel, aluminium and cement, nearly doubling since 2000, and oil companies such as Shell and ExxonMobil plan to invest in petrochemical plants to tap into demand for plastics in developing countries.

Packaging is the largest segment of the plastics market, accounting for more than a third of global demand, followed by construction and clothing. Petrochemicals is also the largest industrial consumer of energy, ahead of cement, iron and steel, the report noted.

The IEA’s predictions for petrochemicals growth come despite rising global awareness of plastic pollution among consumers and increased efforts by governments to tackle it. A growing number of countries, including most recently Malaysia, are banning single-use plastic and taxing plastic bags. In Singapore, Southeast Asia’s largest oil refinery hub, calls to tax or ban plastic made in parliament a week ago were resisted by the government.

The IEA suggested that the plastic pollution problem is solvable, by introducing better technology that can dramatically improve recycling rates, and by introducing bio-based plastics and more waste-to-energy plants to handle excess waste.