Work with suppliers, not against them, to end modern slavery

Take a hard look at your supply chains, accept its realities, and then work tirelessly to put an end to forced and child labour, said experts at a recent event on human rights.

Companies that cut off a supply chain where forced or child labour exists may inadvertently worsen the situation for victims, said experts at a recent closed door event on modern slavery in Singapore.

By pulling out of risky source countries or complicated supply chains to protect its brand name, a company could inadvertently push desperate workers or suppliers into the hands of even more unscrupulous characters, said Dante Pesce, chairman of the United Nations Working Group on Business and Human Rights.

Pesce was speaking at a forum on modern slavery organised by confectionery and pet food company Mars and Eco-Business on the sidelines of the annual Responsible Business Forum, where human rights was a key theme for this year’s edition.

More commonly known for its sweet treats such as M&M’s and Snickers, Mars uses seafood in its pet food supply chain. While child labour has been a publically-reported challenge in the cocoa sector for some time, concerns about modern slavery in its seafood supply chains were raised only as recently as 2015 when the Associated Press published the investigation Seafood from slaves. The report documented harrowing accounts of migrant worker abuse and exploitation on illegal, unreported and unregulated Thai fishing vessels. It was a concern for Mars because the firm sources seafood from Thailand.

You are, at the very least, complicit if you fail to act.

“We said to ourselves that we needed to investigate. If we found risks, were we going to flee and go to a safer market, or stay in Thailand and become a part of the solution?” Looi recalled before the audience of 50 sustainability and supply chain professionals at the Sands Expo and Convention Centre.

In 2016, Mars published an action plan around the issue, and began mapping out its supply chains and working with non-government organisations (NGOs) and the Thai government to identify areas of highest risk. For example, many workers lack access to communication while on vessels far from shore.

The confectionary and pet food manufacturer supported its suppliers in piloting new solutions, such as software that would allow fishermen with mobile phones to continue receiving a signal even while on the high seas so workers can use WhatsApp to stay in touch with family and report abuses, said Looi.

A global survey by Thomson Reuters found that 62 per cent of corporates say they only perform due diligence on their immediate, or tier 1, suppliers.

Large companies have “no excuse” for being ignorant of the abuse that goes on in their supply chain because the tools to find out are readily available, said Pesce. “You are, at the very least, complicit if you fail to act.”

Looi encouraged more companies to examine their supply chains, take up the fight against modern slavery, and learn from other organisations facing similar challenges. “What you see is not what you should worry about most, to be frank. What you don’t see and don’t know is what you should be worried about.”

Putting the house in order

According to the Walk Free Foundation’s 2018 report, 40.3 million people in the world are trapped in slave-like conditions, of which 62 per cent are in Asia Pacific. Although working under gruelling, physically and mentally abusive situations may be unfathomable to the developed world, it may sometimes seem like the only available option for individuals caught in conflict-ridden or impoverished countries.

The UN’s Sustainable Development Goals contain a specific target that demands “immediate and effective measures” to end modern slavery and to eradicate child labour by 2025. But supply chains today criss-cross the globe, making it hard to trace and verify the origins of raw materials that go into many of today’s most popular consumer goods.

The five products imported into G20 countries that are most likely to contain modern slavery in the supply chain are electronics, garments, fish, cocoa and sugar cane, found the Walk Free Foundation report, which called on the group to take urgent and critical action against modern slavery.

UNDP’s Pesce said that governments, as signatories to international treaties and conventions to protect human rights, have an obligation to use whatever means necessary to legislate against modern slavery and enforce those laws.

Despite introducing the Modern Slavery Act in 2015, one of the most comprehensive pieces of anti-slavery legislation globally, 40 per cent of the UK government’s own top 100 suppliers did not meet the basic legal requirement of the act, showing the importance of penalties for non compliance, he added. 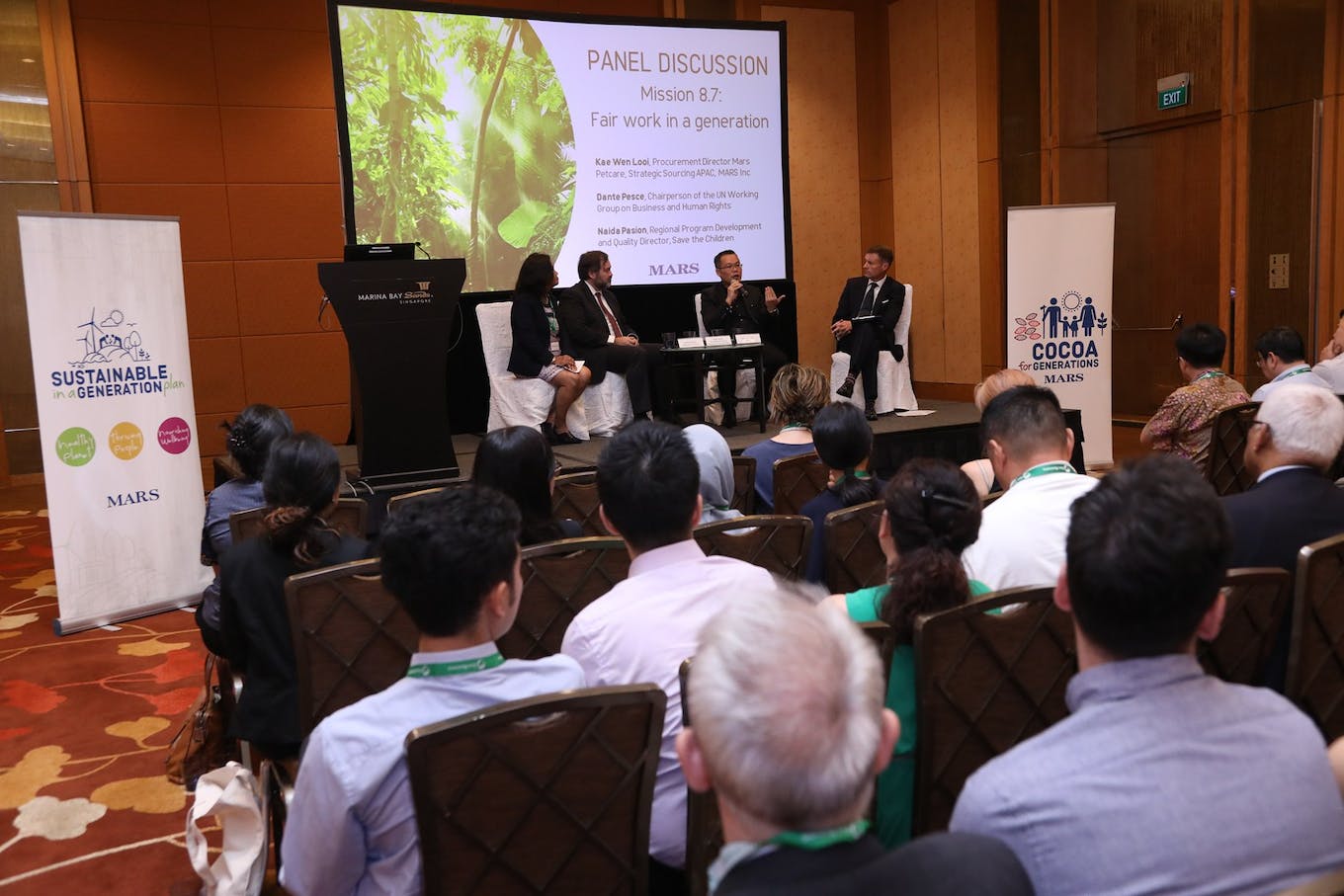 “Governments are economic actors themselves and should put their houses in order,” said Pesce, who added that public procurement supply chains, combined with those of state-owned enterprises, can account for between 18 to 30 per cent of a country’s gross domestic product in a G20 country.

Government assistance is needed more than ever. Fay Fay Choo, Mars’ Asia director for cocoa sustainable sourcing said that when the company identifies abuses in the supply chain, remedying the problem tends to require the help of external partners such as governments or NGOs.

“Modern slavery issues transcend boundaries, cover whole industries and go beyond industry and communities. The only way to achieve lasting, sustainable impact is through collaboration,” she said.

After launching Cocoa for Generations, a sustainability programme to protect farmers and forests, in September, Mars is aiming for all the cocoa it uses in products such as Mars bars, Snickers, M&M’s, Dove and Twix to be sustainably and responsibly sourced and fully traceable by 2025.

But Choo admitted that despite work to support impoverished smallholder farmers, promote better agricultural practices and keep child labour out of its supply chains, there is much more to do.

“We realise that to truly achieve impact, we need to go harder and faster, step-change our efforts, and collaborate with all of our partners crack the code on a model of modern sustainable cocoa farming for tomorrow,” she said.