The BYO movement has been an important cog in the nascent circular economy in Asia Pacific. But will the Covid-19 coronavirus kill off such schemes over the fear that they may spread germs?

As Asia Pacific scrambles to respond to the Covid-19 coronavirus, one of the latest measures by businesses to minimise chances of its spread is to stop bring-your-own (BYO) container schemes.

BYO schemes encourage customers to take along their own reuseable cups and containers to take food and drink away from restaurants and coffee shops, reducing the use of disposable packaging. But some retailers have withdrawn BYO schemes to reduce the risk of contaminated containers spreading the virus.

At the beginning of this month, Starbucks announced that it would temporarily ban BYO cups from stores in the United States. It has also withdrawn the service in the United Kingdom, Canada, Japan, and China, where 4,300 outlets were closed at the start of the outbreak. But discounts for BYO customers are still in play in Singapore and the Philippines.

“Based on the guidance of local authorities, we are taking appropriate preventive actions including temporarily pausing the use of reusable cups across several markets in Asia Pacific,” Starbucks told Eco-Business.

In Singapore, bubble tea maker Koi withdrew its BYO scheme when it announced safe distancing measures in its stores this week.

Healthy eating chain SaladStop! has not stopped its BYO stance in Singapore yet, although the company’s co-founder Katherine Desbaillets told Eco-Business that some customers have complained when they see BYO bowls placed next to plastic takeaway bowls at the salad bar. 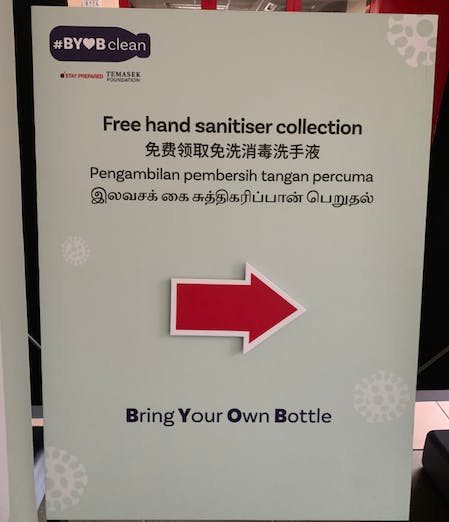 A bring your own bottle hand sanitiser initiative in Singapore. Image: Robin Hicks/Eco-Business

Singapore mall and property operator Raffles Quay Asset Management told retail partners last week that it will suspend its BYO campaign until May in light of the outbreak.

Hailin Pek, executive director of Zero Waste SG, whose environmental group is running a national BYO scheme in partnership with Singapore’s National Environment Agency, said she hopes the virus does not spell the end of BYO schemes.

“I believe that customers and reuseable [container] schemes will take the necessary steps to ensure hygiene standards are maintained during this period,” she said.

In Malaysia, where the country is in lockdown, all food and beverage outlets are closed, with only delivery services available. Jasmine Tuan, a Kuala Lumpur-based creative director at Brandmama and a zero-waste advocate, said use of disposable F&B containers would likely have surged as a result, particularly since BYO is no longer an option.

“BYO bans seem drastic—unless there’s proof that people are a contamination risk by bringing our own mugs and containers [to stores],” she said.

Could going cold on BYO schemes hurt reuseable container startups such as Muuse, formerly known as Revolv, which allows consumers to rent rather than buy containers?

Jonathan Tostevin, the chief development officer and Singapore lead for Muuse, which has operations in Hong Kong and San Fransisco and launched in Singapore last year, told Eco-Business that his firm’s containers are sanitised in line with dine-in standards. According to him, they are as clean as the ceramic cups customers would use in a Starbucks or Coffee Bean.

“We’re continuing to see users use our service as we grow our network in Singapore, though traffic is down with many people working from home,” Tostevin said.

Like Severe Acute Respiratory Sydrome (SARS)—another coronavirus, which spread across 17 countries in 2004—Covid-19 can survive on surfaces for days.

However, Covid-19 is potentially more transmissible than SARS, as the viral loads in the respiratory tract of people infected with Covid-19 are particularly high, and the disease can be spread by people who are not showing symptoms, according to a letter published last week by The New England Journal of Medicine.

“But a far more important measure for reducing transmission is for people to restrict social interactions to only those that are absolutely essential,” he told Eco-Business.

Governments have yet to take any action against BYO schemes to control Covid-19. In Singapore, the National Enviroment Agency said it was up to retailers to decide for themselves the necessary measures to take. Similarly in Japan, the government has not banned BYO schemes; retailers have instead withdrawn them voluntarily.

One organisation has, however, opted for BYO even as it tries to promote better public hygiene amid the outbreak. Temasek Foundation, the non-profit arm of Singapore state investor Temasek, launched an initiative this week to give out free hand sanitiser to residents all over the country. To reduce waste, residents are asked to take along clean, empty bottles to collect the hand sanitiser.