Singapore, this new service gets rid of single-use plastic from takeaways

Revolv, a new container rental service, is launching in Singapore and could help cut single-use plastic from food and drink takeaways, the fastest growing source of plastic waste in the convenience-minded city-state.

A new service is launching in Singapore that enables consumers to rent rather than buy containers for food and drink deliveries, and so cut single-use plastic out of takeaways.

When people use the Revolv service, they order a takeaway drink or meal and leave a deposit for the containers. They get the deposit back after returning the containers to a drop-off point for cleaning and reuse. Revolv “re-users” are entitled to discounts and special offers.

The company launched in Hong Kong and Bali last year on the back of US$500,000 in funding from Hong Kong-based hedge fund Sylebra, and is looking to secure more funding to aid the Singapore launch.

Revolv’s containers—which will be made from stainless steel and rice husks—will be tracked using radio-frequency identification (RFID) tags in the same way that bike-share firms in Singapore track their two-wheelers. The drop-off points will be located within participating retailers, where the containers will be cleaned for re-use.

There is a growing environmental awareness in Singapore, but people are very busy. We need to make Revolv as easy to use as throwing away a cup in the nearest bin.

To begin with, the service will rely on physical tokens, but a digital system that uses mobile tokens is likely to replace it, Revolv’s Singapore lead Jonathan Tostevin told Eco-Business.

Singapore consumers will need to change their behaviour to make the Revolv system work, said Tostevin, who a year ago founded The Final Straw, a Singapore-based company that replaces plastic straws with sustainable alternatives.

“There is a growing environmental awareness in Singapore, but people are very busy. We need to make Revolv as easy to use as throwing away a cup in the nearest bin,” he said, adding that coffee consumers typically dispose of their cups within 50 metres of where they bought them.

It is equally important for the containers to look attractive and for the experience to be better than using single-use plastic, which is usually cheap and flimsy, Tostevin said.

Revolv is to trial the service first in Tiong Bahru, a hip district that is home to an upwardly mobile young populous and some of Singapore’s most popular restaurants, cafes and bars.

The plan is to expand the service to schools, universities, shopping malls, corporates and Singapore’s ubiquitous food courts, which are heavy users of plastic bags and styrofoam boxes for takeaways.

“Food centres are what we’re ultimately aiming for. Revolv is a low-margin business that works at scale,” said Tostevin.

Revolv goes live in Singapore for the first time on Sunday, at sustainable living festival EarthFest, in partnership with organic drinks brand Bushwick. 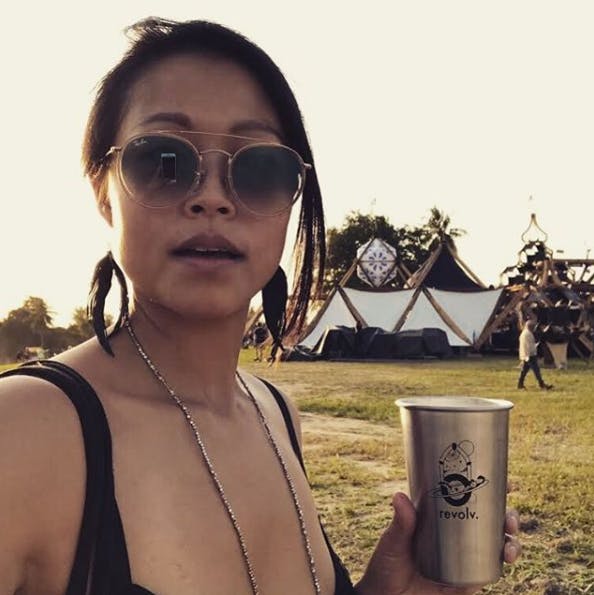 Revolve had a presence at sustainability festival Wonderfruit in Thailand in December. Image: Revolv/Instagram

The service hopes to tap into a small but growing appetite among Singapore residents to reduce their waste footprint. It launches less than a year after the first zero waste grocery store debuted in the country, and on the heels of the Bring Your Own campaign, an initiative to encourage Singaporeans to bring their own containers to food and beverage outlets.

Another category Revolv hopes to partner with is online food and beverage delivery, Singapore’s fastest growing sources of waste, a sector that is expected to triple by 2020. Delivery companies such as Deliveroo and Foodpanda have responded to concern from consumers about excess waste by making disposable cutlery optional but under growing pressure to do more.

“Foodpanda and Deliveroo have huge problems with waste. They have to double bag to ensure products remain robust,” Tostevin said. “But they have an incredible delivery system. It would be great to work with them on a collection system using Revolv to reduce single-use plastic.”

Tostevin said he is aiming to eliminate tens of thousands of single-use plastic items from Singapore’s waste stream within the first year of Revolv’s launch.

Revolv’s debut comes just as Singapore has declared 2019 the Year Towards Zero Waste. On Saturday, the government announced a plan to consult the public on the creation of a masterplan for waste reduction to be released last this year, and a campaign to educate residents on how to recycle properly.

Food packaging is the biggest part of the country’s 800 million kg annual plastic waste stream, out of which only 6 per cent of which is recycled. The rest is incinerated.