Only about 0.2 per cent of available capital is going into the adaptation economy in the region. Underinvestment in climate-vulnerable countries could lead to a cost of US$377 billion in damage and lost growth by 2030, a new study finds.

Only 0.4 per cent of all capital available to financiers is going into adaptation projects in climate-vulnerable countries, and in Asia, the number is even lower, according to a new study.

The study, published by Standard Chartered Bank in November last year, finds that only 0.19 per cent of available capital is going into the adaptation economy – projects such as coastal barrier protection, drought resistant crops and mangrove restoration – in Asia. This is as billions are being pumped into climate mitigation measures such as the rolling out of renewables.

While almost three in five financial firms say they plan to increase investments in climate adaptation measures over the next year, executives report numerous obstacles. These include a lack of understanding in where capital should be allocated and the likely impact of climate change over the next decade. 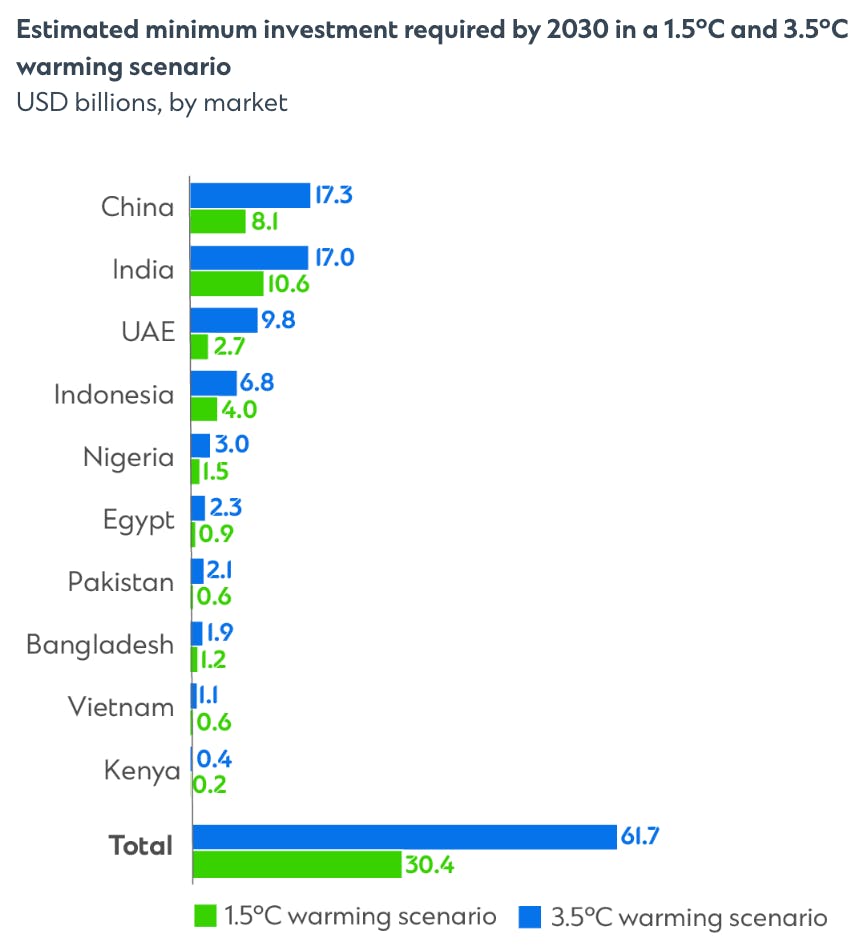 Underinvestment in climate adaptation now could cost emerging economies dearly in years to come, the study titled The Adaptation Economy predicts. It had looked at the investment flows into Bangladesh, China, Egypt, India, Indonesia, Kenya, Nigeria, Pakistan, the United Arab Emirates and Vietnam, and surveyed about 150 bankers, investors and asset managers.

Failure to invest a minimum of US$30.4 billion in these 10 countries this decade could lead to a cost of US$376.6 billion in damage and lost growth by the end of this decades, the study estimated, using a 1.5°C scenario in line with the Paris Agreement.

The sector most in need of climate adaptation investment in these countries is agriculture, which requires US$13 billion of adaptation finance between now and 2030.

This US$30 billion budget amounts to 0.1 per cent of the combined annual GDP of these countries, and much less than the US$95 trillion emerging markets need to achieve net-zero, according to another report from Standard Chartered, Just in Time.

Under a 3.5°C warming scenario, the minimum adaptation finance needed for these 10 countries more than doubles, to US$62 billion.

According to the study, every dollar spent on adaptation in the 2020s will generate US$12 of economic benefit for the 10 markets in the study, worth a potential boost to GDP of US$37.8 billion.

India is the country that will benefit most from adaptation finance, followed by China and Indonesia. Almost US$11 billion will be needed in India to support infrastructure redevelopment and other adaptation measures to cope with increased drought and flooding.

The report emerges three months after the COP27 climate talks reached an agreement to set up a fund to help climate vulnerable countries cope with increasingly severe climate disasters.