Five years ago the world’s most populous archipelago nation started taking action against the decimation of its fish stocks. Indonesia’s waters were being plundered by vessels from nearby countries, particularly China and Thailand, but also Taiwan, South Korea and Malaysia. 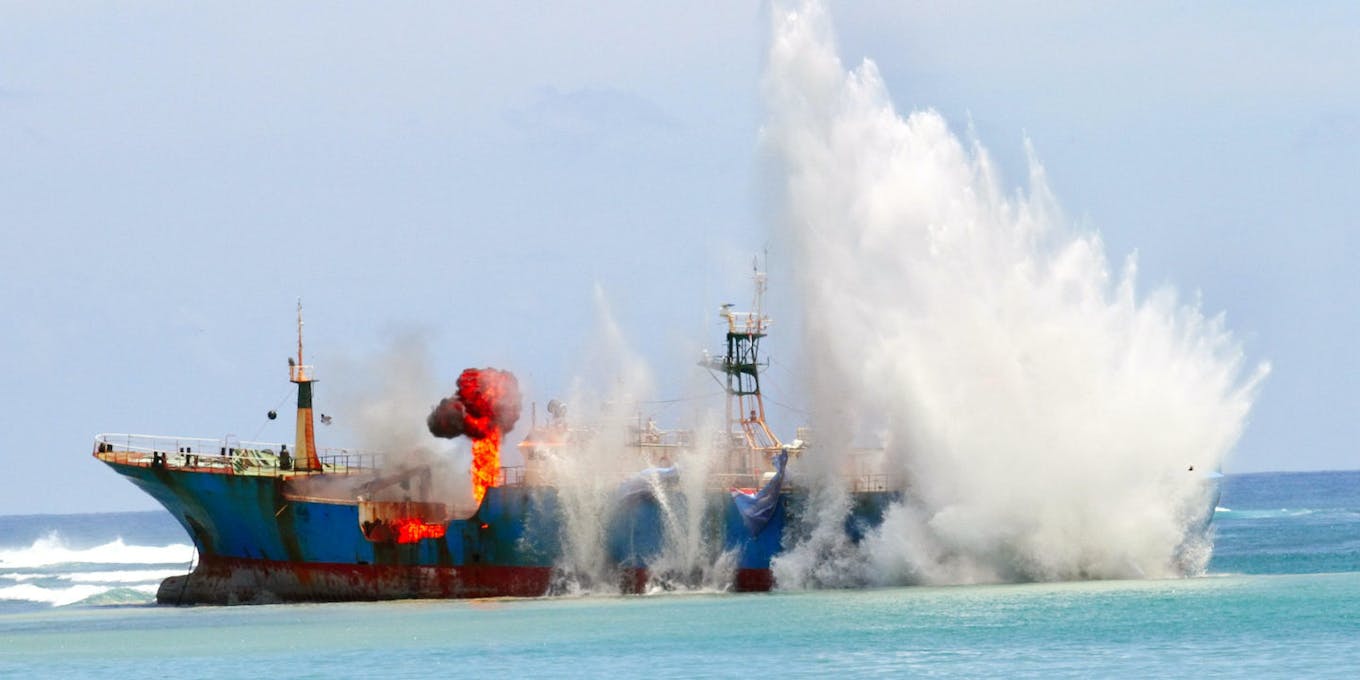 An illegal fishing vessel named Viking is blown up by Indonesian authorities off Pangandaran, West Java, in March 2016. Image: Ramdani/Xinhua/Alamy via chinadialogue Oceans.

When Susi Pudjiastuti became minister of fisheries and maritime affairs in 2014, she began dramatically curbing this practice of illegal, unreported and unregulated (IUU) fishing. A report last year found a more than 80 per cent drop in foreign vessels fishing in Indonesian waters, as well as evidence of increased catches by Indonesian fishermen.

“Before this paper, the ministry [of fisheries] would say their anti-IUU policy was having an effect, and would throw in numbers, but there was no hard evidence,” said Reniel B Cabral, a lead author of the report, from the University of California, Santa Barbara. “We used independent data … to show that there really is an effect, and gave confidence to Indonesia that [their policy] was working.”

The main reason for the change? Fewer Chinese vessels engaged in IUU fishing. Such vessels had been responsible for between 2,000 and 5,000 hours of fishing per month—nearly ten times that of the next biggest perpetrators, Thai vessels. Monitoring the situation using satellites and other means, Cabral’s team found the policy had brought those thousands of hours down to virtually nil.

As the largest seafood-producing country and the largest distant water fishing nation in the world, China is critical to addressing IUU fishing and ensuring sustainable fisheries practices.

Susi’s muscular strategy for defending Indonesian fisheries included the sinking of 488 IUU vessels since October 2014. Only one of these was carrying a Chinese flag. However, many of the 26 vessels illegally using Indonesian flags were likely connected to China. Susi has attributed this low proportion partly to superior technology on Chinese boats which makes them more difficult to capture. Indonesia may also be loath to test its relationship with China too explosively.

China has the largest fleet of distant water fishing vessels. Greenpeace puts the number at around 2,500. While its total catch is hard to determine, the existing data sketches an alarming picture. A study by the non-profit Global Fishing Watch suggested they outstrip the total fishing hours of the next ten countries combined.

Under Minster Susi, Indonesia has taken a lead role in the fight against IUU fishing. Last October, the country hosted the Our Ocean conference to foster cooperation and action on global marine policies. China was conspicuous in its absence.

“Not attending the conference in Bali was a missed opportunity for China to show their level of seriousness and commitment to ocean issues,” said Amanda Shaver, research associate with the Environmental Security programme at the Stimson Center.

Not long ago China was more active in engaging Indonesia on maritime issues. It was during Xi Jinping’s first visit to Indonesia in October 2013 that he launched the Maritime Silk Road, the component of the Belt and Road Initiative which aims to expand investment in ports and coastal infrastructure across Asia. Early in his term, Indonesian President Joko Widodo welcomed Chinese maritime cooperation. But those initial steps have not led to sustained collaboration between the countries on these issues.

Despite encompassing six million square kilometres, Indonesia’s territorial waters cover only a tiny fraction of the globe. The country has no control over the high seas, which are currently loosely regulated by the 1982 UN Law of the Sea. Many consider it woefully inadequate for addressing modern IUU fishing practices.

Shaver believes China needs to be a bigger part of the solution. “As the largest seafood-producing country … and the largest distant water fishing nation in the world, China is critical to addressing IUU fishing and ensuring sustainable fisheries practices,” she said.

Indonesia’s aggressive policing is not feasible for countries with fewer resources. Minister Susi and an increasing number of NGOs are calling for new international agreements to stem IUU fishing and other threats to the ocean. Several international schemes are being deliberated.

One is Port State Measures, a binding agreement that would prevent known IUU vessels from using ports and landing their catches. Fifty-seven nations have signed up, and though China is not yet one of them, the agreement has the potential to have a big impact.

“Beijing doesn’t really want to be left out of any of these high-level, political processes,” said Shaver, “and so continuing to show the success and impact of [ocean policy efforts] will likely push them to engage more”.

There are some signs that China may be shifting, at least domestically. According to Tabitha Grace Mallory of the University of Washington, the latest five-year plan for fisheries caps the number of distant water fishing vessels, and their catch. Moreover, China is set to provide ports with a list of more than 200 IUU vessels to be denied entry. The question is how will the measures be implemented.

“My concern is that it’s partly for show,” said Mallory. “China is essentially abiding by the letter of the law but not the spirit of the law.” She is concerned, for example, about a lack of clarity around the stated goal of reducing fishing subsidies by 40 per cent.

For mechanisms like this to work, there is a need for more data on fisheries, IUU vessels and their catches. Indonesia has been a leader on that front too, becoming in 2017 the first country to share fishing vessel tracking data with Global Fishing Watch. Other countries, including Peru and Micronesia, have stated their intention to do the same.

“Susi has inspired other countries … to share their data,” said Aki Baihaki of Global Fishing Watch. “I hope it has a bigger ripple effect.”

For Indonesia, the focus now will be on better understanding the role of domestic fisheries and developing regulations that protect resources while preserving the livelihoods of fishing communities.

Indonesia’s remarkable progress shows that, with concerted, data-driven action, the health of fisheries can be improved. Restoring global fish stocks will require China to collaborate more closely in the policing of IUU vessels originating in the country.

“It’s best to have China’s participation directly,” said Mallory. “Managing fishing is a collective enterprise. Everybody needs to play their part.”