Sustainable supply chains and the road to net zero

The road to decarbonisation requires commitment and collaboration between the private and public sector to ensure that companies and countries reduce their carbon emissions. Logistics is one key area where there is vast room for improvement.

There were 131 billion parcels shipped worldwide in 2020 — a figure that is predicted to double in the next five years. Asia represents a huge market for global trade and logistics with the continent expected to account for 57 per cent of the growth of the global e-commerce logistics markets between 2020 and 2025.

But getting things from A to B creates an enormous carbon footprint.

Slashing planet-warming gases produced by transport and logistics will be instrumental in helping nations and corporates hit their climate goals.

A raft of corporate net-zero commitments has largely led to rapid efforts to drive down direct Scope 1 and Scope 2 greenhouse gas emissions. More organisations are pledging to reduce Scope 3 emissions generated upstream and downstream of the value chain and those embodied in transport and distribution.

While Europe and North America dominate historic transport emissions, much of the projected growth in emissions is in Asia, according to the World Economic Forum which reckons that highly ambitious policies could cut emissions by 70 per cent – but not to zero.

Operating in 220 countries and territories, Germany-headquartered Deutsche Post DHL Group is one of the largest logistics firms in the world. It also produced 33.3 million tonnes of carbon dioxide emissions in 2020.

The organisation has pegged its pathway to decarbonisation on reducing annual group carbon dioxide emissions to below 29 million tonnes by 2030 as it attempts to hit zero emissions by 2050. An investment of US$7.6 billion until 2030 will be funnelled into alternative aviation fuels, the expansion of electric vehicles and climate-neutral buildings, the group announced on 22 March.

“In order to accelerate the move towards net zero carbon logistics, more work needs to be done to develop solutions within transport,” Khadilkar said. Private sector efforts alone are not enough, governments and policymakers must also buoy decarbonisation efforts.

From burning less, to burning clean 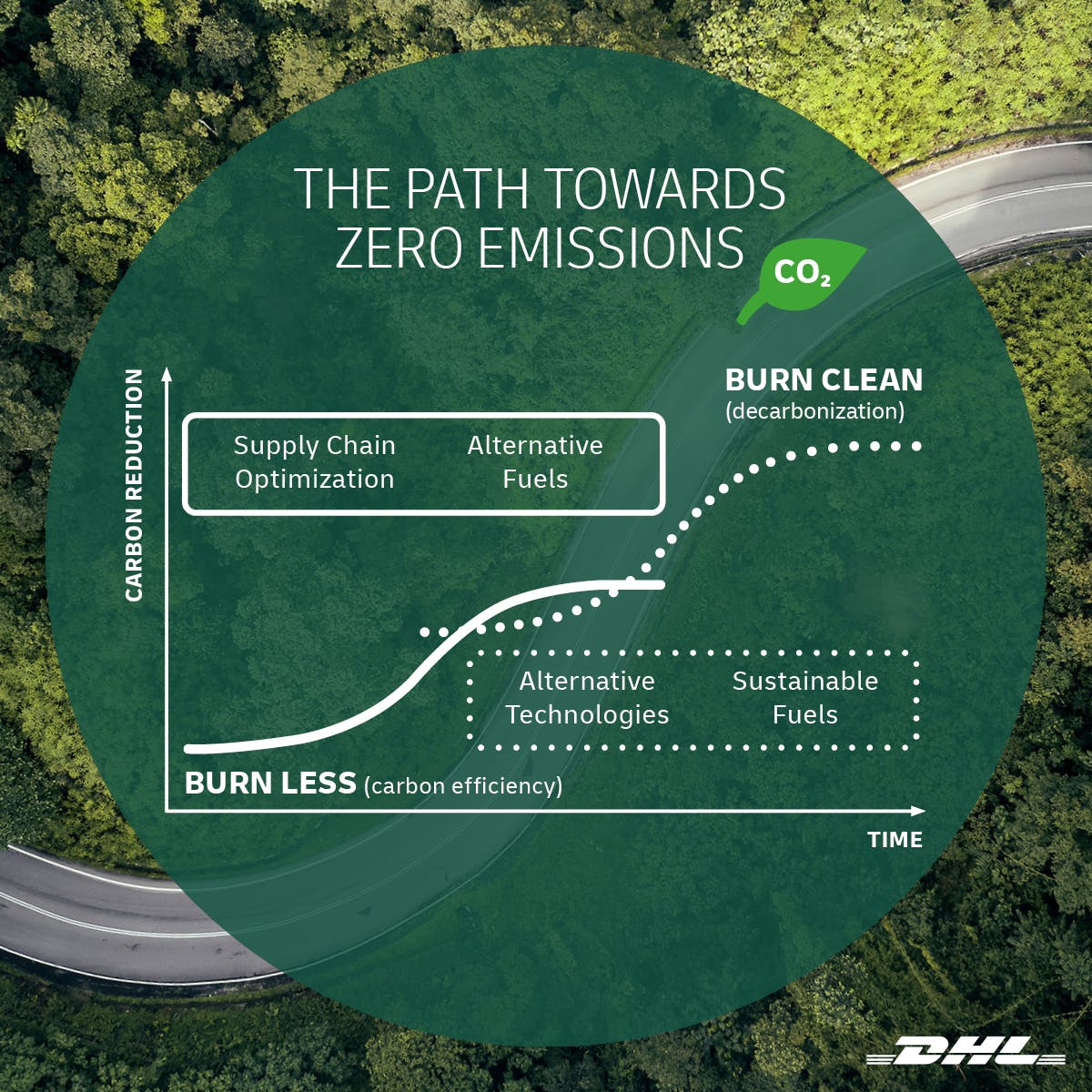 The S-curve framework - used to illustrate the typical pattern of start, rapid growth and maturity of technology diffusion as well as the corresponding efficiency improvements across an industry or economy - is one way to guide carbon reduction in logistics. This is achieved by reducing, compensating and removing. [Click to enlarge]. Image: DHL

Carbon offsets are used to compensate for the hard-to-abate emissions and bridge the leap to the second dotted line S-curve—which represents the impending usage of new and currently less familiar types of technologies and approaches for carbon reduction—the final leg to net zero.

On this ‘burn clean’ pathway, the company sees the removal of carbon through sustainable fuels and alternative technologies, such as electric vehicles.

However, there are several roadblocks to getting transport and logistics firms to burn clean fuels and move closer to net zero. Initial efforts show that firms find it challenging to navigate this road alone without meaningful collaboration.

“Most logistics firms have the know-how for reducing their carbon footprint using their existing technologies and familiar ways of working. But that will only take them so far as per the solid S-curve,” said Professor Emeritus Steven Miller, former vice provost (Research), Singapore Management University.

“To make the required progress in carbon reduction, companies need to jump to the next-generation (dotted line) S-curve enabled by new technology and new ways of working which will enable far greater opportunities for carbon footprint reduction,” he added.

Transport is still largely dependent on fossil fuels and is likely to remain so in the coming decades. Long-distance road freight (large trucks), aviation and shipping are areas from which carbon is particularly difficult to eliminate.

The potential for hydrogen as a fuel, or battery electricity to run planes, ships and large trucks is limited by the range and power required; the size and weight of batteries or hydrogen fuel tanks would be much larger and heavier than current combustion engines.

Currently, the logistics sector has low clean-technology maturity and high costs for such, such as new energy vehicles (NEVs), sustainable fuels, according to DHL. Supporting infrastructure like charging ports for EVs and access to renewable energy is currently lacking in some markets, driving up the cost of sustainable alternatives further. Meanwhile, aviation is still grappling with hitting on a viable low-carbon strategy.

“Some of the sustainable technologies and solutions in the early stages may not be commercially viable or operationally scalable,” acknowledged Khadilkar.

The IEA says that there needs to be deep cuts in fossil fuels to reach the mid-century target of limiting global warming to 1.5 degrees Celsius.

Climate Action 100+, the world’s largest grouping of investors representing US$65 trillion in assets, warned in March that the aviation industry needed to take “urgent action” to align with the world’s climate goal. Its report highlighted the need for a “substantial” increase in sustainable aviation fuel between now and 2030.

In a bid to cut the reliance on fossil fuels in its air freight, DHL has set an ambitious goal of using 30 per cent sustainable aviation fuel (SAF) for all air transport by 2030.

Last month, DHL announced one of the largest SAF deals with bp and Neste which have committed to provide 800 million litres until 2026. DHL expects its strategic collaborations to save about two million tonnes of carbon dioxide emissions over the aviation fuel lifecycle – equivalent to the annual greenhouse gas emissions of about 400,000 passenger cars.

Tackling emissions created on land, DHL teamed up with Swedish firm, Volvo Trucks to introduce heavy duty electric delivery trucks for regional transport in Europe. The initiative is buoyed with funding from the country’s innovation agency, Vinnova and energy agency.

The adoption of new fuel technologies, essential to helping firms complete the journey to zero carbon emissions, requires partnering with governments to fund research and development efforts. Public investment in higher-risk programmes can also lead to the development of potentially disruptive technologies for energy applications.

“Government support can improve the rate of adoption of such technologies or solutions,” said Khadilkar. “Government incentives can also enable more research in green technologies and speed up any efforts to bring them to market.”

This would also reduce the cost. While companies like DHL and its industry peers can pilot new green technologies into freight, the cost will have to be shouldered by the consumer to some extent. Customers and companies say they want to live more sustainably but not all are willing to pay a premium to enable it.

Firms can only edge closer to net zero through trial and error. “Governments need to help through more research and development support, staging and coordinating larger scale domestic and international field trials, and by providing incentives for relevant business investments in new technology and capital, as well as in the related needs for human learning and training to work with these new technologies,” Miller said.

The adoption of sustainable alternatives has accelerated in countries where governments are offering financial support. This includes subsides and incentives through tax relief. Government subsidies have helped China become the world’s largest market for EVs. It is expected to exceed the government 2025 target and hit 20 per cent nationwide penetration this year.

Governments have also proven that they can help reduce emissions created by last-mile delivery.

In Singapore, a nationwide parcel delivery locker network spearheaded by the Infocomm Media Development Authority of Singapore allows e-commerce platforms and their customers collect and return online purchases using parcel lockers scattered across the city. It is expected to reduce the distance travelled for delivery purposes by 44 per cent daily and the city state’s CO2 emissions by up to 50 tonnes a year.

Waste also needs to be addressed. Out of the 1.56 million tonnes of household waste generated in Singapore in 2018, approximately one-third was packaging, according to a study by the World Wide Fund for Nature and DHL Consulting published in November. About 2000,000 e-commerce parcels are delivered daily in the city state, and this is expected to grow by about 50 per cent in the next three years.

In a bid to stem the tide of waste, a six-month pilot scheme was launched last month in Singapore to encourage shoppers to return packaging from their online purchases and encourage retailers to adopt a circular waste model. The pilot is an attempt to tackle the mountains of waste caused by the high volume of online shopping.

Supply chains are coming under greater scrutiny as firms and countries accelerate efforts to decarbonise. If the transport and logistics industry fails to respond effectively, it is likely to face significant and rapid regulatory tightening, and ever greater scrutiny from capital markets.

Strong public-private partnerships are needed to accelerate the necessary transition to the new generation of technology and new supporting business processes and ways of working in order to get supply chains to net zero carbon emissions, Miller added.

The private sector and government institutions could follow a simple framework to prompt deeper discussion and action surrounding the acceleration of adopting decarbonising logistics. This begins with a discovery phase where current infrastructure, resources and technologies are evaluated, sustainability challenges assessed, and key areas of focus are prioritised.

Embedding sustainability into corporate governance could help influence the decision-making that flows into the supply chain. This includes measures such as introducing mandatory sustainability requirements around reporting and transparency.

The challenge for governments will be to encourage companies to form robust decarbonisation plans with supporting incentives so that no single player is penalised for taking the harder path to sustainability.

Lastly, companies on the path to net zero need to examine each aspect of decarbonisation and identify where they can follow, share or lead on aspects of the net zero journey. While some firms will be able to distinguish themselves as sustainable leaders in some areas, they will also need to make alliances with public and private stakeholders.

But time is of the essence as capping the global temperature rise to 1.5 degrees Celsius above pre-industrial levels — a target key to avoiding the worst climate impacts — is slipping further out of reach.

“Climate promises and plans must be turned into reality and action now,” said Antonio Guterres, secretary-general of the United Nations, following a clarion call by hundreds of scientists last month to take action against climate change. “It is time to stop burning our planet, and start investing in the abundant renewable energy all around us.”