Latest data show that a full-year EV sales boom has helped to prop up China’s sluggish car market. Analysts believe that even without state subsidies, EV deliveries in China will continue to climb.

Despite the disruptions caused by a global chip shortage and persistent Covid-19 outbreaks in the country, China’s car market ended a three-year downtrend last year, helped by strong sales of electric vehicles.

The latest industry figures, released last Wednesday by the China Association of Automobile Manufacturers (CAAM), are indicative of how the EV sector in the world’s largest auto market has shifted into high gear after a period of stagnant growth, said analysts.

The sales of so-called new energy vehicles (NEVs) – a category covering hybrids, plug-ins and hydrogen-powered autos – in China jumped 160 per cent to a record 3.52 million units in 2021, the fastest growth rate since 2016, with passenger car sales up to 3.33 million.

Market experts said that China’s electric cars will be on track to reach the 20 per cent nationwide penetration goal this year, well ahead of a 2025 schedule set by the government.

Fu Bingfeng, executive vice-president of the manufacturers’ guild CAAM, believes that the production and sale of EVs will maintain growth this year, given the prospect that issues like chip shortages and high prices of raw materials will gradually ease.

“The EV market is now a lone bright spot in China’s car industry. From what we can see, the development of the market in China is nearing maturity,” said Fu.

“It might also have weaned off its reliance on policy support from the state. Now its explosive growth is largely driven by organic consumer demand.” 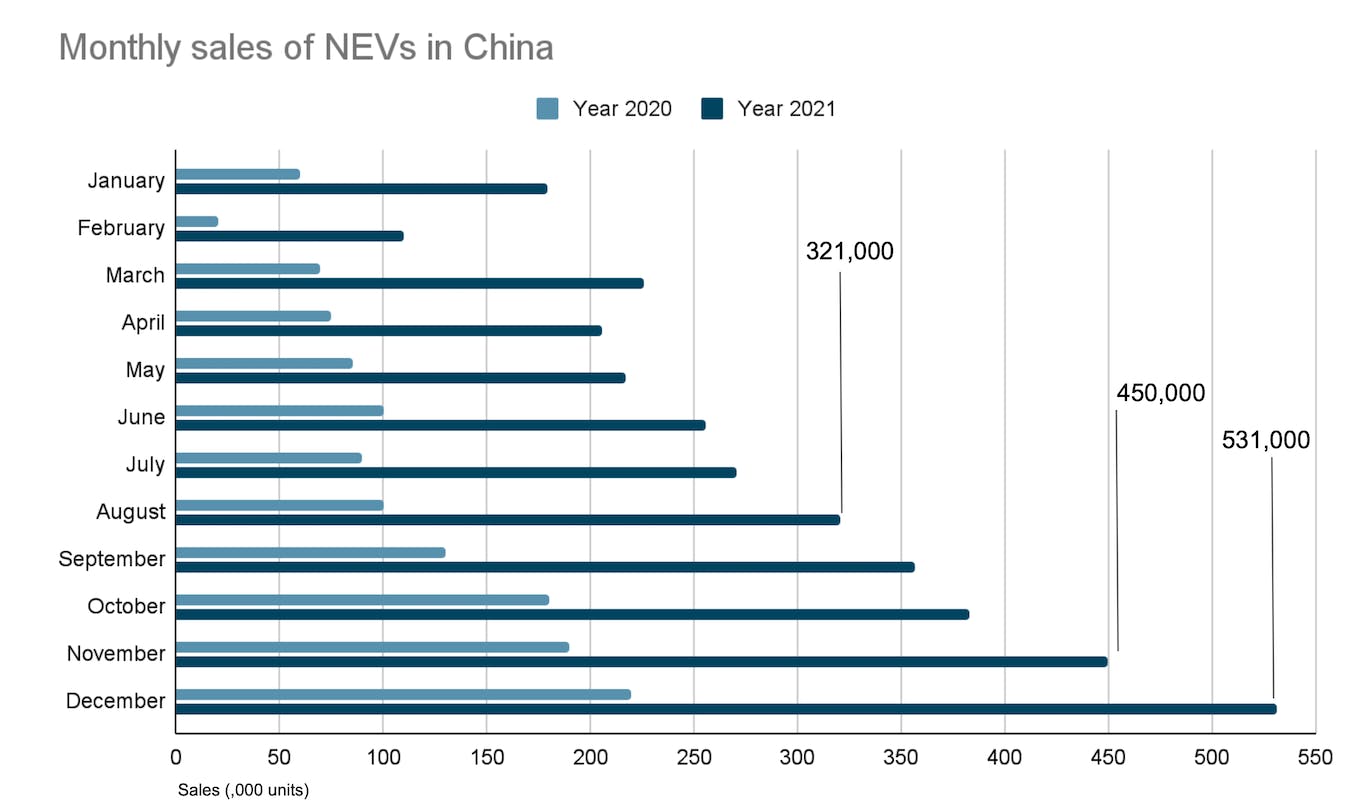 Monthly sales for NEVs in China closed at a record 531,000 units in December last year, according to statistics from the China Association of Automobile Manufacturers. Image: Eco-Business

Subsidies on electric vehicle purchases have helped China become the world’s largest market for EVs, accounting for roughly 50 per cent of global sales. The state is, however, rolling back these subsidies by about 30 per cent, as production of these cars become cheaper, and will withdraw them altogether by the end of the year.

China’s EV subsidies currently reimburse buyers different amounts depending on a vehicle’s range – how far it can travel on a full charge. The standard payout last year was roughly RMB18,000 (US$2,840). That discount has now been reduced to around RMB 14,400 (US$2,270).

UBS Bank’s chief analyst of the Chinese automotive industry, Gong Min, agrees that consumer acceptance of NEVs is growing and China’s electric vehicle market is beginning to stand on its own feet, with state financial support playing a smaller role.

“In Europe, subsidies for EVs can easily go up to €6,000 (US$7,000). Under the United State’s Build Back Better plan, the Biden administration has also proposed a $7,500 tax credit for plug-in electric cars, in order to achieve a sales goal of having half of all new vehicles sold by 2030 to be electric,” said Gong. “The incentives provided by the Chinese government are much lower.”

“Chinese consumers are quite a lucky bunch. The competition in the hotly contested EV market ensures that prices are kept low and the selection is diverse too,” he said.

EV penetration is crucial if China is to meet its goal of achieving carbon neutrality by 2060. Getting greenhouse emissions down from the transport sector is a bigger challenge for China, as compared to nations with more developed automobile markets, as car ownership in Chinese urban cities is still growing.

The latest data also show Chinese NEV exports posting a strong performance, with 310,000 units exported last year, triple the number from a year before. Half of the vehicles were assembled in Tesla’s Gigafactory in Shanghai. These cars were delivered to more than ten countries and regions in Europe and Asia.

The second most popular EV model exported from China was Dacia Spring Electric, manufactured by Renault and Dongfeng. It sold 17,398 units in the first eight months of 2021.

The EV market is now a lone bright spot in China’s car industry.

China has never been a big car exporter globally, but Fu noted that the latest export figures for EVs are significant and promising. “Some of the major exporters were homegrown ones like SAIC Motor and BYD. This shows that Chinese EV makers are turning into more formidable competitors in a more electrified future,” he said.

Barbara Finamore, senior visiting research fellow at the Oxford Institute of Energy Studies and a close watcher of China’s energy policies said that the impact of the subsidy phase-out on EV sales remains to be seen and the EV sector in China might be heading towards a major period of consolidation.