Combined, they can help avoid or capture close to 19 gigatonnes of carbon dioxide emissions a year — over half of the total carbon emissions humanity generated in 2020.

As global emissions continue to soar and mitigation efforts falter over a protracted pandemic and a war in Ukraine, scientists have listed 43 climate solutions, along with their effectiveness and price tag, in a global report studying what humanity can do to keep climate change in check.

It amounts to one of the clearest calls for policymakers to take action against climate change. The conclusion of hundreds of scientists, collated by the Intergovernmental Panel for Climate Change (IPCC) and approved by all national governments, said that keeping global temperature rise to 1.5 degrees Celsius above pre-industrial levels — a target key to avoiding the worst climate impacts — is becoming increasingly unlikely.

“Some government and business leaders are saying one thing, but doing another. Simply put, they are lying,” said Antonio Guterres, secretary-general of the United Nations, at the launch of the latest IPCC report on Monday, as he gave a sharp assessment of political and corporate pledges so far. The world had committed to taking strong climate action at the COP26 climate summit, held in Glasgow last year, though things have appeared largely business as usual since then.

“Climate promises and plans must be turned into reality and action now. It is time to stop burning our planet,” said Guterres, adding that people need to hold their leaders accountable.

The latest IPCC report comes just over a month after an earlier paper detailed irreversible damages for the planet and mankind should global warming continue unimpeded.

“Increasing fossil fuel production will only make matters worse,” said Guterres. “It is time to stop burning our planet, and start investing in the abundant renewable energy all around us.”

According to the report, of the top five climate solutions, only reforestation will require a carbon price higher than US$100 a tonne for it to reach its full potential. Two of them, wind and solar energy, can help to avoid over 2 gigatonnes of emissions a year even without a carbon price, as they are already undercutting the cost of fossil fuels in parts of the world. 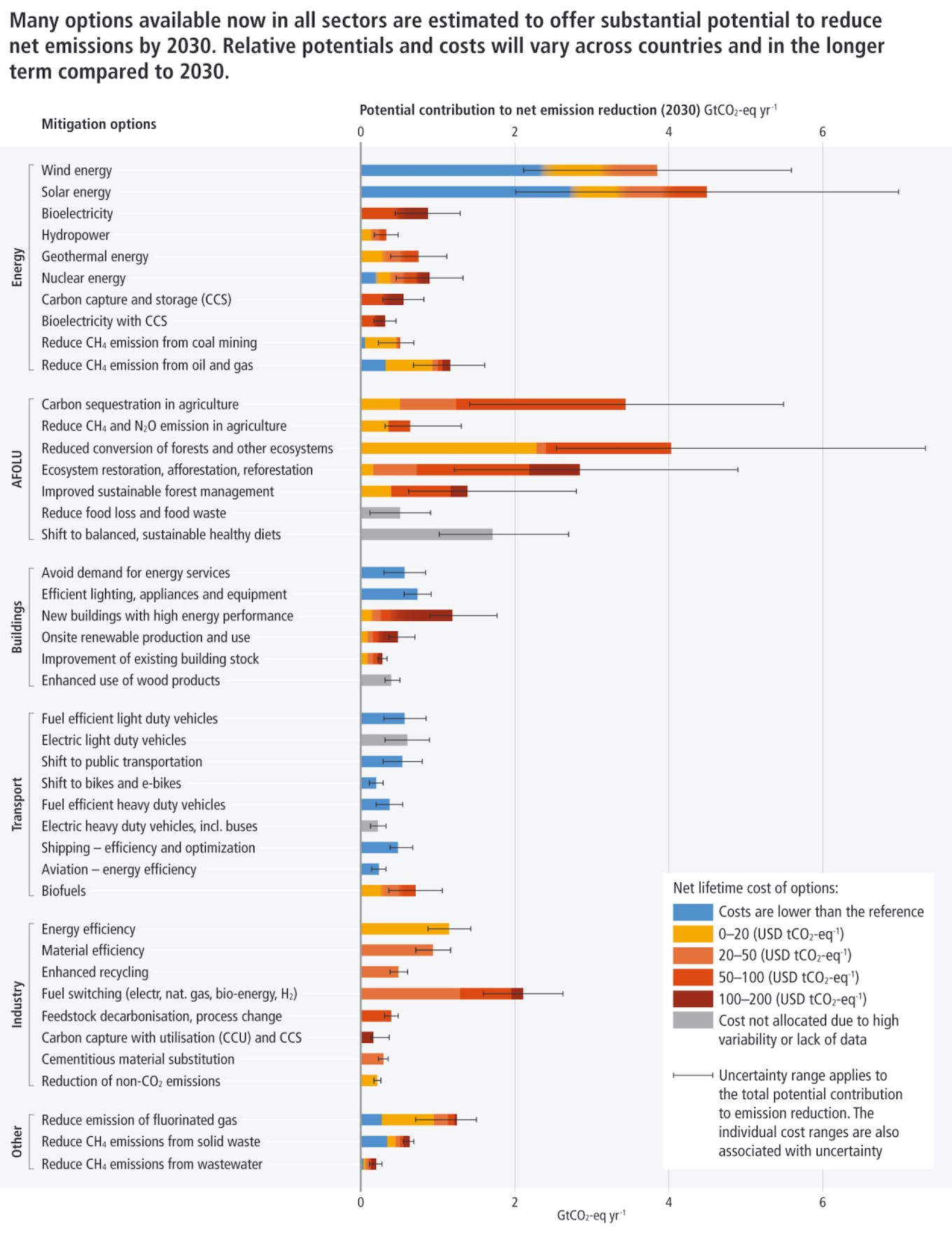 A list of climate solutions, along with their costs and capacity to reduce carbon emissions. Image: IPCC. [click to expand]

On the other hand, carbon capture, utilisation and storage (CCUS), a darling of the fossil fuel industry, ranks as one of the most expensive and least effective climate solutions, with the potential to absorb only about 0.2 gigatonnes of carbon emissions a year.

But the report stated that the whole arsenal of solutions need to be employed, each optimised to regional circumstances, as the window to keep global temperatures and climate risks under control closes rapidly.

As new technologies mature in the coming decades, the climate solutions leaderboard may also change, it added.

If the global carbon price rises to US$100 a tonne, it could help unlock enough land use-based climate solutions to sequester up to 14 gigatonnes of emissions a year. Large swaths of forests could be conserved, soil management in farms could be optimised, and food waste could be minimised, according to the report.

Up to half of the carbon-absorbing potential could still be fulfilled at US$20 — what some countries are charging currently.

Working with nature could also benefit biodiversity and improve livelihoods of communities that depend on their forests or farmlands, but proper planning and stakeholder engagement is required to avoid unintended harms.

During recent negotiations for a global biodiversity protection plan, Indigenous groups have complained of red tape and high costs when they join forest conservation plans.

Forest carbon projects, where corporations pay to conserve ecosystems in exchange for carbon offsets, have been growing in popularity. The market is expected to balloon to US$200 billion by mid-century from US$0.6 billion in 2019.

The IPCC report called for stronger governance, monitoring and financing to support nature-based measures. It also warned that being able to store carbon in trees is no excuse for delaying climate action elsewhere.

We tend to talk about nature as a victim of climate change, while ignoring its huge role as a climate solution. This IPCC report, I hope, finally brings an end to that.

“We tend to talk about nature as a victim of climate change, while ignoring its huge role as a climate solution. This IPCC report, I hope, finally brings an end to that,” said Dr Bronson Griscom, senior director of natural climate solutions at US-based environmental non-profit Conservation International.

“It is the most conclusive endorsement yet of nature as a climate solution,” he added.

The IPCC report also said that sucking carbon dioxide out of the air is an “unavoidable” aspect of achieving net-zero quickly.

Locking carbon in forests and farmlands are the only widely practised methods today, but these carbon sinks can easily leak when deforestation or bad agricultural practices occur, the report added.

It considered more technical solutions in its models looking at keeping global temperature rise to 1.5 °C.

They include direct air capture of carbon dioxide using machines and bioenergy with carbon dioxide capture and storage (BECCS) — a process where trees are grown specifically to be burnt for energy, with the resultant emissions piped underground.

In one studied scenario, these technologies would capture over a thousand gigatonnes of carbon dioxide up till 2100, while forests and farmlands contribute another 400 gigatonnes.

But such solutions are little more than small-scale demonstrators today. There are 19 direct air capture plants operational as of last year, capturing just 0.01 megatonnes of emissions annually. Nine BECCS projects are operational or being developed as of 2019, totalling about 3.8 megatonnes of capture capacity annually.

Scaling up these plants could also come with disadvantages, such as high energy consumption and land-use footprint, the IPCC report said.

No time to waste

Climate promises and plans must be turned into reality and action now. It is time to stop burning our planet.

Emissions grew at a slower pace between 2010 and 2019 versus the previous decade, but the drop is far from sufficient.

As it stands, overshooting 1.5°C of warming is “almost inevitable”, but a quick return to below that temperature by 2100 is possible, said the report.

In that scenario, global emissions will have to peak by 2025 and drop by over 40 per cent in 2030, before getting close to net-zero in 2050. Global output of methane, a short-lived but potent atmosphere warmer, will need to be cut by about a third.

Over 100 hundred countries pledged to reduce methane emissions by 30 per cent by 2030 at COP26, though fossil fuel powerhouses China, India, Russia and Australia sat out.

It is possible to keep temperature rise to 2°C if net-zero is reached by the 2070s, although extreme weather events would hit harder.

“It’s now or never, if we want to limit global warming to 1.5°C,” said Professor Jim Skea, co-chair of the group of scientists that worked on the IPCC report.

“Without immediate and deep emissions reductions across all sectors, it will be impossible,” he said.

The report called for a “substantial reduction” in the use of fossil fuels. While heavily polluting coal needs to go almost completely by 2050 to limit temperature rise to 1.5°C, oil and gas, if coupled with carbon capture technology, can still be used at about half of present levels.

However, if carbon capture is still not widely available in the coming years, oil and gas will need to drop to a third of the consumption rate today.

Such efforts need to be coupled with greater electrification, uptake of renewables, energy efficiency and use of low-carbon fuels such as hydrogen.

The report added that cities will need to be designed to encourage walking not driving, cars need to be electric, and natural spaces need to be retained to trap emissions.

Decarbonising the industrial sector would be more challenging, the report conceded. Steel and cement making remain some of the most carbon intensive processes today, and low-carbon solutions are not yet ready.

Three to six times more money is needed for climate mitigation. The world has enough money, but it is not being allocated well, the report said. Developing countries are especially left out.

Better coordination and governance could result in greater climate resilience and social gains while weeding out inequality, the report added.

“Never before have we had such a strong argument that things are going to get really bad if we do not act. And that if we do act, the benefits are so strong,” said Griscom.

“We have never seen a better scientific argument than what we have in front of us,” he added.

The approval process for a 64-page summary of the report for policymakers took 14 days, two days longer than planned, as government leaders pored over each line of the document.