One garment at a time, fashion students from Raffles College of Higher Education are helping to cut Singapore's 150,000 tonne textile and leather waste footprint through a collaborative upcycling project.

While Singaporeans rush to buy new clothes to replace old ones in the run up to Chinese New Year, fashion students from the Raffles College of Higher Education in Singapore will instead spend the next few weeks working to upcycle donated clothes.

As part of their school project, tertiary-level students and senior lecturers in fashion design and fashion marketing are collaborating with real estate developer City Developments Limited (CDL) and Eco-Business to collect, process and resell donated items for EcoBank, a charity initiative by the two firms.

During a recent session held at City Industrial Building in eastern Singapore, students and lecturers spent hours categorising donated items and select clothes that were suitable for upcycling.

Upcycling involves unstitching old garments, combining and reconstructing them; a process which not only demands the creative input of adding the students’ ‘own touches’ to the designs, but also the logistical task of maximising the materials used in each garment, to reduce waste.

Fashion design students told Eco-Business that making a complete set of clothes alone will take between three and four days, if they work really hard. They expect the entire project to take a few weeks given the volume of donations.

“People don’t realise that clothes are part of what’s killing the world.”

Yet, the big pile of donations in the room is a small proportion of Singapore’s fashion waste footprint. In 2016 alone, 150,000 tonnes of textile and leather waste was generated, of which only 7 per cent was recycled.

Maria Angelica Torres Cruz, a fashion marketing student at the Raffles College of Higher Education, told Eco-Business that “people don’t realise that clothes are part of what’s killing the world. You think you have to save electricity, save oil, save water, but nobody thinks about saving your clothes.”

”Fashion consumers don’t think about how it hurts the environment. They just think about what they want now, and what’s on trend,” added Torres.

Pointing to a pile of clothes, Torres emphasised that most of the donated clothes were of very good quality. Some even had their price tags on. 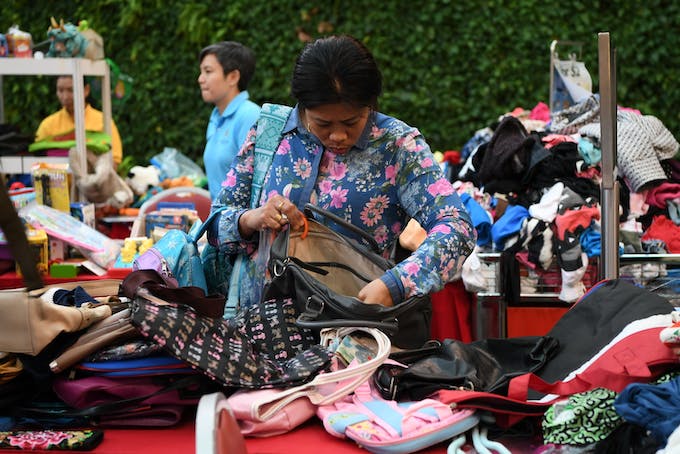 To raise awareness about the need for socially responsible fashion, the fashion marketing students are documenting their upcycling project and will commence their multimedia campaign today, on Eco-Business’s Facebook and Instagram page.

The campaign seeks to encourage consumers to apply the 3Rs—Reduce, Reuse, Recycle—to fashion, and to call on clothing manufacturers to produce sustainably designed clothes. Noting the lack of a textile recycling plant and recycling bins for clothes in Singapore, Torres said it is high time for the future of fashion to be sustainable.

Fast fashion companies such as H&M have developed initiatives to reduce their environmental impact, such as allowing the exchange of old clothing for discount vouchers in many of its stores, but acknowledged that the technology for recycling is limited. “For this reason, the share of recycled materials in our products is still relatively small,” H&M reported.

Anisa Johnny, senior lecturer in Fashion Marketing and Management, noted that one constraint for producers in Singapore is the price sensitivity of consumers. But she challenged producers to innovate: “Think of sustainable textiles. Doesn’t end up in landfills but doesn’t cost too much for the customer to support.”

Johnny continued that the onus does not only fall on producers. “We’re all involved in fashion waste, every single one of us.” She thus encouraged consumers to buy less, buy better and fix things instead of throwing them away.

Creating a sustainable fashion business is precisely what her students seek to do. The upcycled clothes will be on sale at the upcoming EcoBank bazaar, held at City Square Mall from 2 to 4 March 2018, giving them a second life.

Recognising the difficulty her students faced in the project, Johnny said: “I know it’s tough for them. But it’s really important when you see [fashion waste] upfront, then you think ‘I’m going to do something about it’. It’s so powerful.”

She added: “I wish we can get more adults to volunteer, and more companies involved. It would suddenly hit home.”