Korea Electric Power Corporation suffered from an unprecended deficit in the first half of the year due to high coal and gas prices. Energy analysts say it is unclear who will buy the soon-to-be stranded assets from the utility firm.

South Korea’s biggest electricity distribution company is looking to sell its existing coal and gas assets overseas, following an unprecedented US$12 billion loss as of the first half of this year.

Korea Electric Power Corporation (Kepco)’s earnings have been on the downward trend in the past six years due to high coal and liquified natural gas (LNG) prices, with the exception of financial year 2020, owing to low fuel prices in the pandemic-induced economic slowdown, found a new study by global think-tank Institute for Energy Economics and Financial Analysis (IEEFA).

As fossil fuels continue to dominate its generation mix and petrol costs are not passed through to customers, high and volatile gas prices have been the major culprit behind Kepco’s deteriorating earnings, leading to its record-breaking deficit. 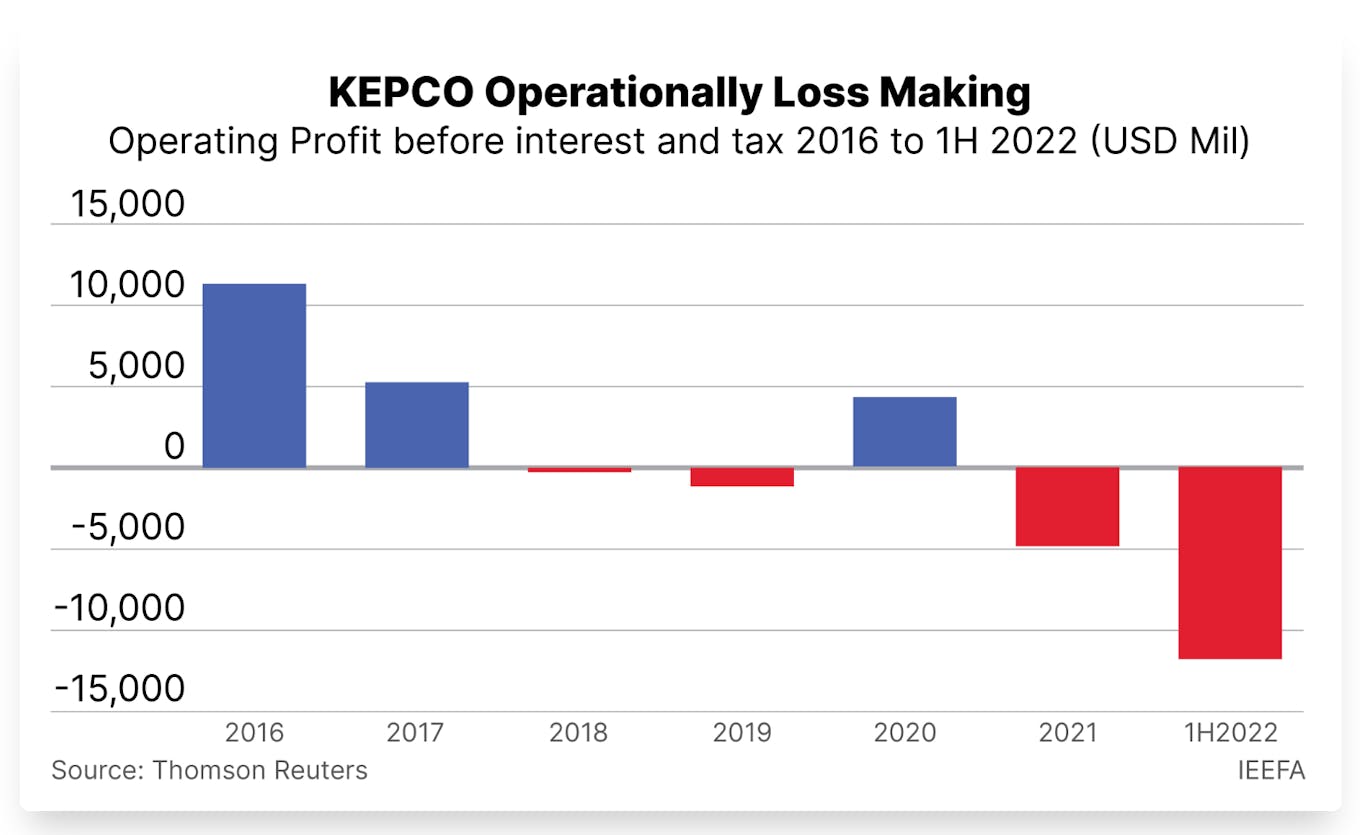 One of the assets the firm plans to sell is a 200-megawatt (MW) coal plant in Naga City, Cebu, in the Philippines, Hazel James Ilango, energy finance analyst at IEEFA, told Eco-Business.

“The company is reviewing the withdrawal of other coal power projects in phases and offloading some of its gas power plants. It is still unclear which other specific coal and gas assets Kepco will be selling,” said Ilango, also the report’s co-author.

Ilango added that buyers of coal assets would also usually be coal-related companies, but the selling price is still “questionable” since they are “soon-to-be stranded assets”.

“KEPCO has benefited from the sovereign ratings’ umbrella and received a final rating six to eight notches higher than its baseline credit assessment, thus enabling it to go from a speculative investment to high investment grade,” says Ilango.

At the end of 2021, the company’s internal cash sources were insufficient to cover its debt maturing in the next 12 months putting it at risk of defaulting on its obligations in the near term.

“Instead of revisiting investment choices, Kepco has become overconfident of government bailout, which suggests the need for a rethink in how sovereign-linked entities are assessed,” said the study.

Lagging with its clean energy investment

Kepco has been “taking its time with its renewable energy buildout” even as renewable power generation costs dropped significantly over the last decade, according to the report.

Even as it vowed to move away from coal in 2020, the utility still deems the fossil fuel as a reliable earnings generator, representing half of its future generation mix.

It may not have pushed through with two coal ventures in the Philippines and South Africa following its pledge, but it proceeded with the acquisition of a US$189 million stake in the controversial Vung Ang 2 coal-fired power project in Vietnam, and participated in the Jawa 9 & 10 coal project in Indonesia.

Liquified natural gas (LNG) has also taken up to 19 per cent of its power mix in the last ten years.

It has been trying to establish itself as a seasoned green bond issuer since 2018, of which proceeds are required to be allocated to green projects, which include renewable energy. But its clean energy assets are “negligible” suggesting that its green bond issuances were merely “tokenism”, said IEEFA researchers in the report.

The company has likewise been investing in technologies such as blue hydrogen and carbon capture, utilisation and storage (CCUS) which is “alarming”, given that it is not in any position to splurge and has limited experience in such technologies, added the study.

Ilango said: “Kepco’s decision to take its time with renewable buildout, continue to rely on fossil fuels, and invest in unproven technology will likely result in more operating losses, a higher debt load, and create additional risks for its investors and the South Korean market. Its ability to repay its debt is therefore questionable.”