The world’s first national enquiry framing climate change as a human rights issue has been filed before the Commission on Human Rights of the Philippines, but respondents are questioning its jurisdiction.

The Commission on Human Rights (CHR) of the Philippines warned on Monday that companies who do not participate proactively in an ongoing investigation about their role in contributing to climate change stand to lose their investors.

Speaking at a preliminary meeting about a petition that Filipino typhoon survivors and civil society activists filed two years ago, Roberto Cadiz, CHR commissioner warned: “For those who are not open (to dialogue), some investors are willing to pull out the investments and put it in companies who are more open to address climate change.”

The petition, filed by Filipino typhoon survivors, other communities suffering the impacts of climate change, and civil society organisations, including Greenpeace Southeast Asia (Philippines), petitioned the Commission to investigate the role that the 47 companies played in contributing to natural disasters such as syper-typhoon Haiyan, which devastated the Philippines in 2013 and left more than 6,300 dead.

In response to the petition, the CHR in October this year sent notices to the companies mentioned in the petition, requesting them to attend the 11 December meeting to discuss how the investigation will be conducted, and submit evidence and the names of supporting witnesses.

Out of all the accused companies, only two legal representatives from cement giant CEMEX appeared at the CHR headquarters, along with 10 other respondents, all of whom filed submissions questioning the jurisdiction of the commission.

Cadiz maintained that although the CHR of the Philippines has no territorial jurisdiction over the companies and cannot compel them to appear before the commission, it will still proceed with the enquiry.

He said the CHR has received evidence on the companies’ contribution to climate change both from international and local sources, and that it is using this information to come up with recommendations on the next steps for the investigation.

“We don’t know how these recommendations will be used by the international community,” said Cadiz.

“But if we do come up with these recommendations that seem averse to companies, then they will only have themselves to blame, for not showing up, for not joining this dialogue,” he added.

In a statement sent to Eco-Business responding to the petition, Shell reiterated that its support for climate change is well-known and has been documented in its sustainability reports for the past two decades.

“Whilst Shell has great respect for the Philippine Commission on Human Rights, we do not believe this is the right forum to address the issues raised here, which fall outside the organisation’s mandate. Climate change is a global, societal challenge that should be addressed through sound government policy that stimulates low-carbon choices for businesses and consumers,” the statement read.

The 47 firms were culled from a groundbreaking study by US climate researcher Richard Heede, who identified that 90 entities—including the worlds’ largest fossil fuel companies—are responsible for an estimated 65 per cent of all greenhouse gas emissions between 1751 and 2013.

Greenpeace noted that this study shows that those who have contributed the lion’s share of greenhouse gas emissions can now be named and challenged for their role in the climate crisis, which countries like the Philippines are especially vulnerable to. 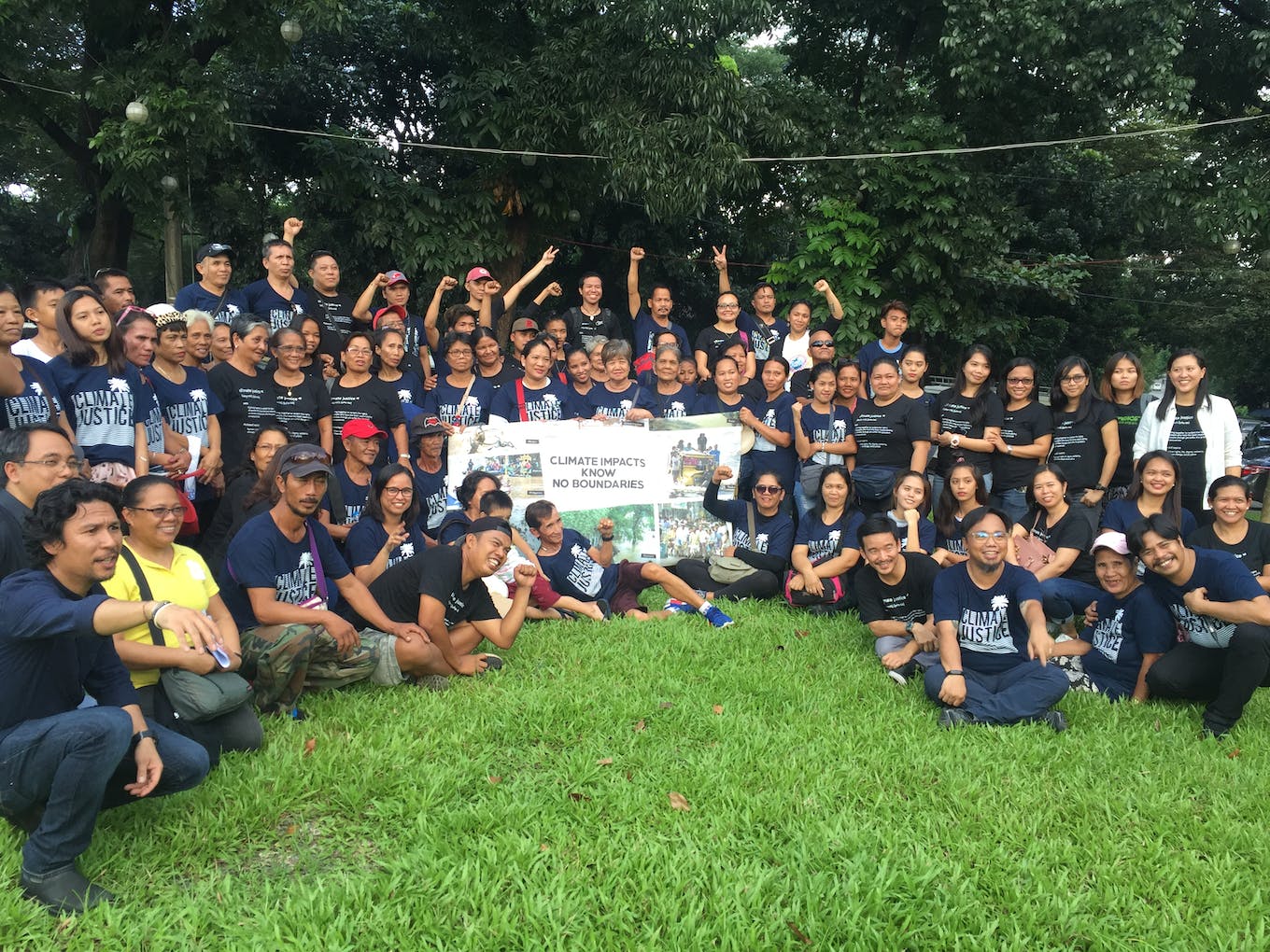 Together with Greenpeace, members of petitioning organisations and communities, including typhoon victims from all over the country, hold their own program outside the CHR. Image: Eco-Business

The Philippine national enquiry has received much global attention as it is the first time a legal petition framing climate change as a human rights issue that has been filed before a national human rights institution (NHRI).

The enquiry is one of a wave of people-powered legal actions taking place around the world. Greenpeace Nordic and Nature and Youth in Norway, young people in the US, senior women in Switzerland, a Peruvian farmer in Germany, a law student in New Zealand, and many others, are taking legal action to seek protection from climate change.

Cadiz said although similar cases have been filed in front of many NHRI’s around the world, they have all been rejected because the groups never handled a similar case before.

“We are still thinking of how to navigate this case as there is no precedent. That’s why all these NHRI’s all over the globe are looking at us. If we succeed, then they might use it as a template,” Cadiz said. “The CHR of the Philippines is willing to be the first.”

Following Monday’s preliminary meeting, the first formal inquiry hearing will be conducted at the end of the first quarter of 2018.

The CHR has already conducted fact-finding missions in Tacloban City, Leyte and Libon, Albay and will continue its community dialogues until the first half of 2018. 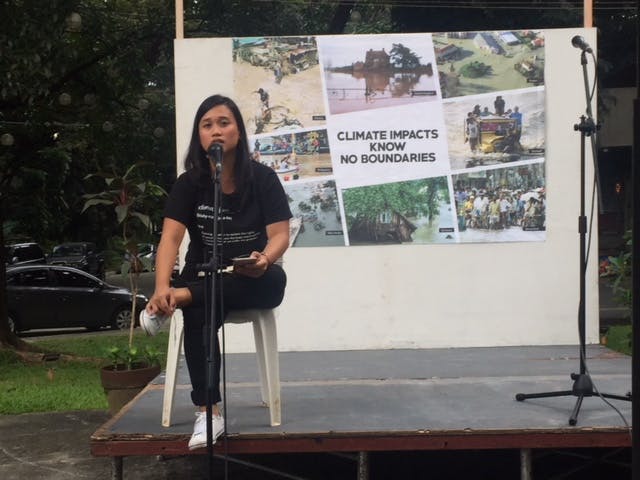 During the program, climate change victims like Joanna Sustento, a survivor of Typhoon Haiyan, recounts how she turned her loss into an advocacy for climate justice. Image: Eco-Business

Still a win even if it was a no-show

Members of petitioning organisations and communities traveled to Metro Manila from various provinces around the country to hold vigil outside the CHR as they awaited news from the meeting. When they learned hardly any of the respondents showed up, they did not seem to waver.

Joanna Sustento, 25, one of the petitoners, said the non-appearance of most of the respondents only made her feel more empowered to continue fighting for climate justice.

“It’s bad news because it shows these companies really don’t care. But it’s also good news because they just proved that they do not know how to respond to those they have severely impacted,” Sustento said.

Sustento lost her parents and relatives during the super typhoon and has been active in advocating climate justice ever since.

Meanwhile, Daisy Pedranza from Bataan came to the hearing to protest the 140 mega-watt power plant that was built less than the mandated 200 kilometers distance from her community. Since the plant was built in 2012, her community has suffered various illnesses like respiratory diseases and weaknesses in the body.

For Desiree Llanos Dee, climate justice campaigner for Greenpeace Southeast Asia-Philippines, she is still hopeful that these companies will participate when the public hearings eventually start.

“This is still a win. They have to realise they will lose their seat (in the dialogue). Investigations will still continue whether or not they show up,” Dee said.