Pasir Gudang dumping—what happened and who is responsible?

How will Malaysia recover from a toxic chemicals dumping frenzy in its Pasir Gudang industrial complex in March, which sickened over 5,000 people, shut down schools, and cost the government millions?

On the morning of 7 March 2019, several individuals in Pasir Gudang, Johor, were hospitalised for what looked like symptoms of chemical poisoning. It was later discovered that a lorry carrying chemical waste illegally dumped it in the nearby Sungai Kim Kim river. How did it happen? And what will it take to prevent such acts from being committed in the future?

What and where is Pasir Gudang?

Established in 1918, Pasir Gudang is in the Southwestern part of Malaysia, within the state of Johor. It was used for sand mining and storage of sand to be exported to Singapore. The Malaysian government decided to convert it into an industrial area after 1969, specialising in transportation and logistics, shipbuilding, petrochemicals, and other heavy industries. 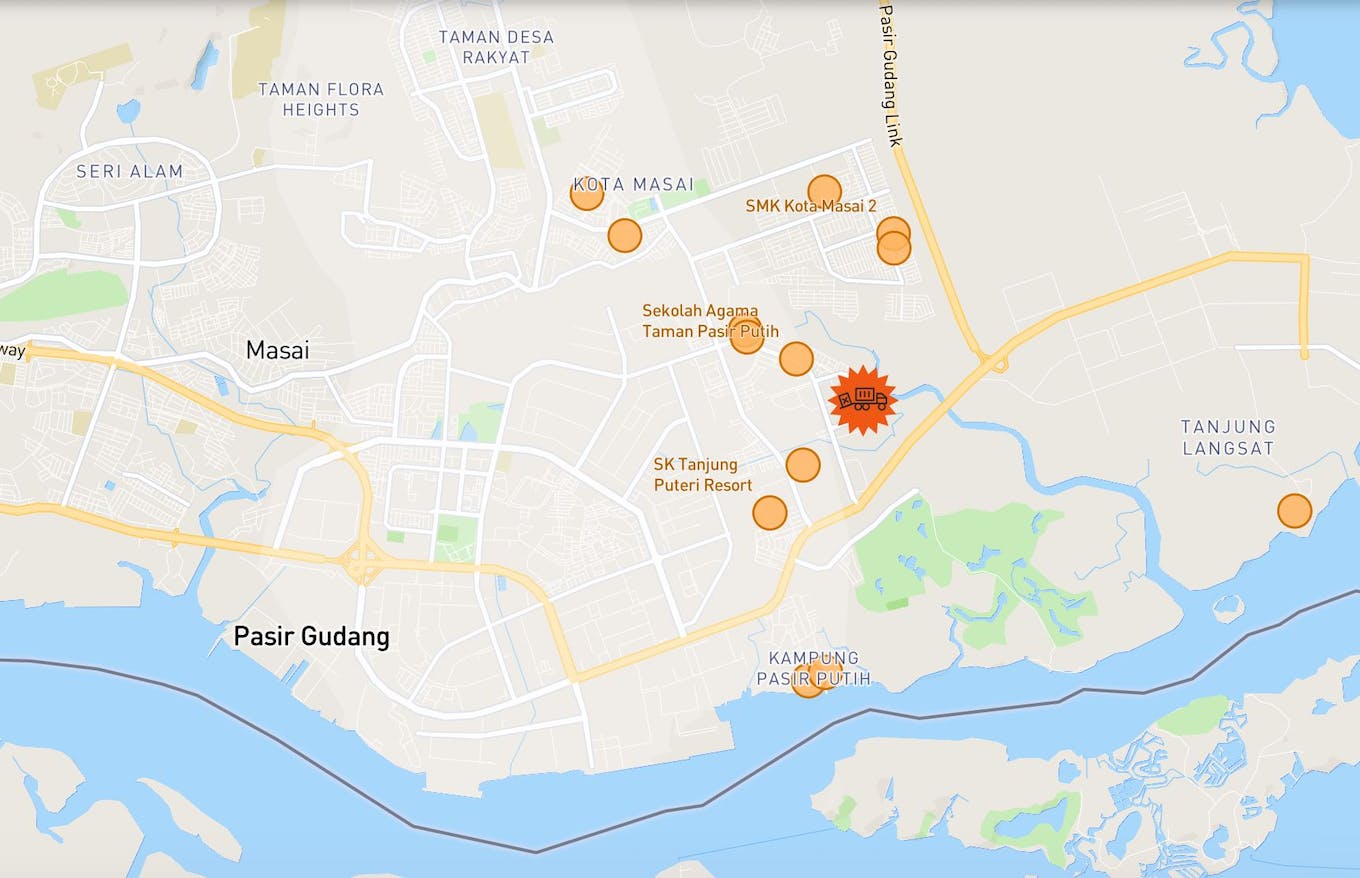 In the pre-dawn hours of 6 March 2019, a tanker lorry under an illegal tyre recycling company dumped 20 to 40 tonnes of chemical waste under a bridge in Kota Masai into Sungai Kim Kim at Pasir Gudang. These chemicals consisted of benzene, acrylonitrile, and acrolein. 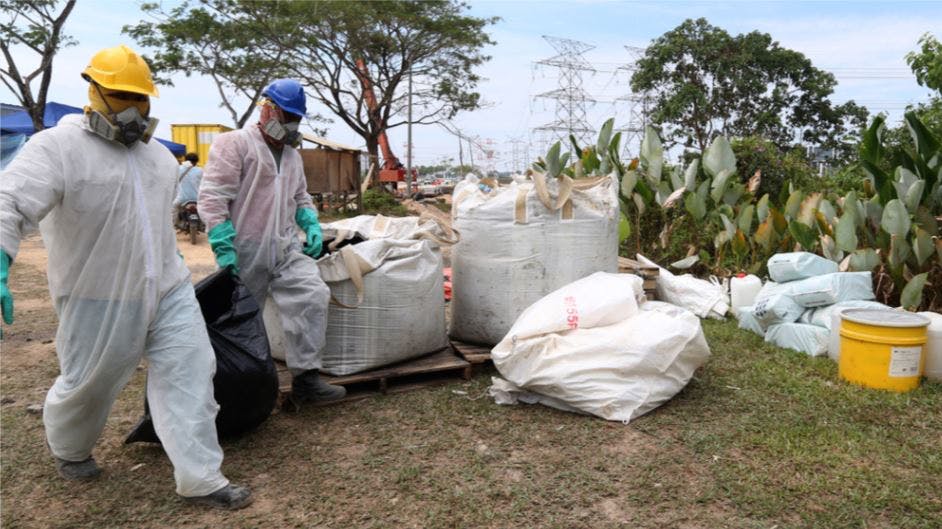 The next day, 103 victims in the Pasir Gudang area complained of nausea, shortness of breath, and vomiting spells, with 35 people hospitalised. However, the doctors at that point were still unsure of what chemicals had affected the patients and did not know how to treat them. Two schools—Sekolah Kebangsaan Taman Pasir Putih, and Sekolah Menengah Kebangsaan Pasir Putih—situated within half a kilometre of the dump site, were then closed.

Initial cleaning works began, but the cleaning contractors who were engaged for the job had no experience in dealing with chemical waste and worsened the situation.

A special meeting was held on 8 March, where a new contractor approved by the Department of Environment was hired to continue the cleaning. The state government was to bear the cost of the appointment. Three contractors were subsequently appointed. A RM6.4 million budget was approved to finance the clean up of the 1.5km stretch of the river.

Thereafter, Malaysia’s Fire and Rescue Department hazmat team was deployed to Johor where they collected 20 air, water, and soil samples daily for real-time analysis. They found nine chemicals in the samples taken from the site: benzene, acrolein, acrylonitrile, hydrogen chloride, methane, toluene, xylene, ethylbenzene, and d-limonene. They claimed that the chemicals were not fully and properly cleaned up and were simply left behind.

By 14 March, South Korean chemical company, Lotte Chemical Titan Bhd stepped in to provide assistance and the expertise of 20 employees to affected schools and homes for the clean up. The Sultan of Johor also pledged RM1 million in aid to help the authorities purchase “whatever is necessary” to help the victims. 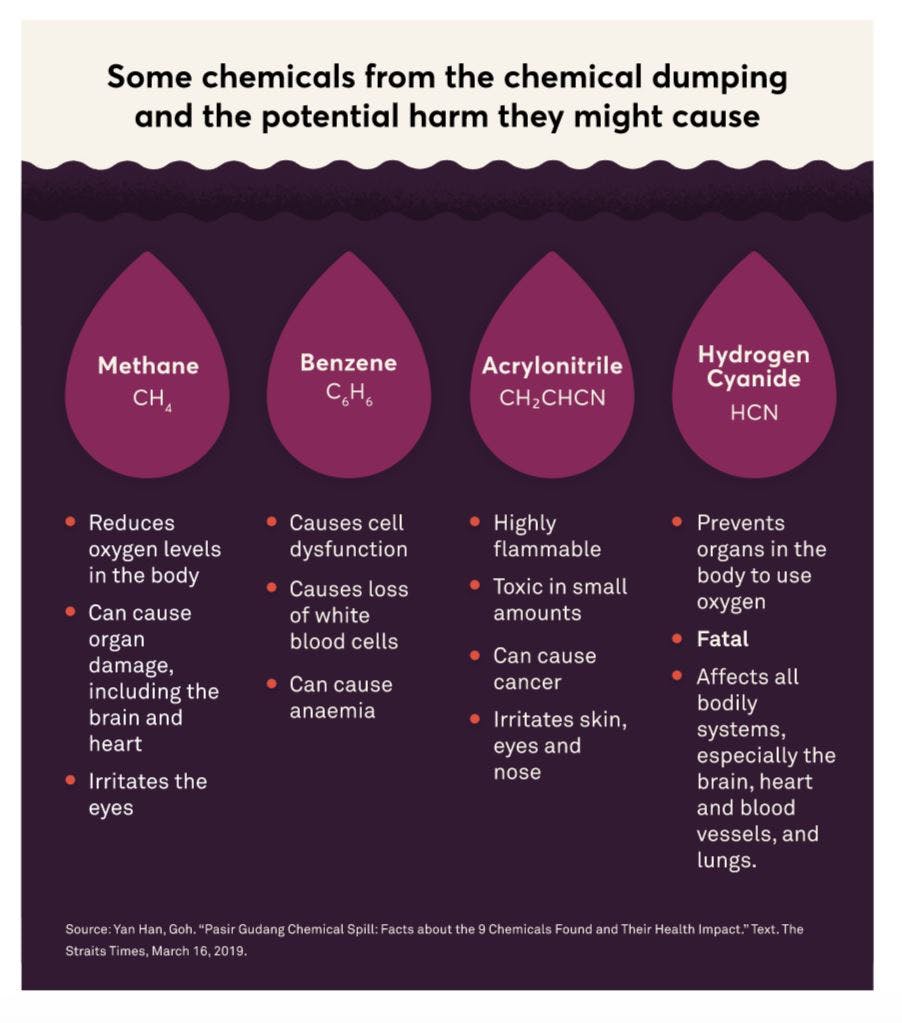 The situation continued to worsen, and news of more victims quickly surfaced. On 11 March, the second wave of toxic pollution hit 106 victims. 29 people were sent to health clinics nearby for examination, while 77 people were referred to Johor’s Sultan Ismail Hospital. By 12 March, 13 schools within a three km radius of Sungai Kim Kim were ordered shut by the Education Minister.

A day later, a total of 111 schools were immediately ordered to be closed through the school break until 31 March.

Effects on Malaysia in numbers

Exactly what was the extent of the damage? A total of 1.3km of the polluted sections of the river was cleaned up by 16 March. A combined 900 tonnes of soil and 1,500 tonnes of polluted water were removed from Sungai Kim Kim by 19 March. The greatest consequence was definitely on the individuals and schools affected by this.

The petrochemical complex is in an industrial district that sits across the Straits of Johor from the northeast tip of Singapore. Singaporeans living in this region of Singapore, such as residents in Punggol, reported smelling a mixture of sulfur dioxide and volatile organic compounds. Although NEA has assured the public that volatile organic compound levels are safe, there have been concerns about the long-term impact on the health of Punggol residents.

On 15 March, Outward Bound School Singapore in Punggol stopped all water activities for precautionary measures. Since the Pasir Gudang dumping in early March, Singapore has announced that its food, water, and air remain unaffected. The Singapore Civil Defence Force has found no toxic chemicals in the air. The Public Utilities Board and the Agri-food and Veterinary Association have also been testing water quality in the parts of Singapore near Pasir Gudang to assure the Singapore public.

Who is responsible and what are the charges?

One Singaporean and two Malaysians face multiple charges. If found guilty, they could pay fines of up to RM$500,000 (S$166,000) and face a five-year jail sentence.

Malaysian police continue to search for another Singaporean who is also a listed director of the company responsible for this incident.

However, after initial charges were slapped on the men, the Johor Bahru High Court reversed the charges, by reducing the bail amount for the two of them and offering bail to the Singaporean who was at first denied bail.

How Malaysia will move forward in the aftermath

While the clean up in the aftermath of the toxic dump was carried out at a significant cost to the Malaysian authorities, the health implications for the communities in Pasir Gudang—which has a population of just over 45,000 people— affected by the incident will have long term consequences. Some children who developed nerve problems from the poisoning are still unable to walk properly; neurologists have said they have to be monitored for the next three years.

There is recognition that steps have to be taken to prevent a disaster like this from happening again. Illegal toxic dumping continues to take place across Malaysia. Pasir Gudang, though extreme, is not an isolated case. The government said that a National Scheduled Toxic Waste Management Committee would be established to draft a standard operating procedure for chemical pollution disasters.

The Malaysian Department of Environment will be carrying out checks on 252 chemical factories in the area after the crisis is over. The Johor Sultan also acknowledged the need for government hospitals to be built in the Pasir Gudang area and called for the Malaysian state government to implement an integrated control and enforcement action against all factories which use hazardous chemicals.

This story was published with permission from Kontinentalist.