Five actions could deliver one-fifth of the emissions cuts needed to keep global warming to 1.5C.

Scaling up renewables, greening the shipping industry and eating more seaweed are among the ocean-based solutions that could help to meet global targets to cut greenhouse gas emissions, according to a landmark report.

In the first analysis of its kind, scientists and policymakers found that the ocean can play a much bigger role in climate mitigation than previously thought.

It has the potential to deliver more than one-fifth (21 per cent) of the emission cuts needed by 2050 in order to keep global average temperature rise to the Paris Agreement target of 1.5C – the equivalent of closing all of the world’s coal-fired power plants.

It shows that the ocean is much more than a victim of climate change. It is also a powerful source of solutions. “Given political will, appropriate policy and investment in technology, the ocean could be a new ally in the fight,” the authors write in the report entitled “The ocean as a solution for climate change: Five opportunities for action”.

“Our future health and prosperity are closely linked to the state of the ocean,” said Erna Solberg, co-chair of the panel and the prime minister of Norway. “This report signals an exciting new pathway to a low-carbon, climate-resilient future. Coupled with land-based emissions cuts, it shows that ocean-climate action could provide a lifeline for the economies, food sources, coastal communities and sea life at the frontline of climate disruption.”

It was released in New York on Monday at the UN Climate Action Summit, two days ahead of the UN climate panel (IPCC)’s special report on the ocean and cryosphere, which is expected to highlight the devastating impacts that climate change is having on the ocean and human wellbeing.

Excess greenhouse gases in the atmosphere have made the world’s oceans warmer, more acidic, less able to hold oxygen and less productive. The impact of these changes is being seen in severe coral bleaching, sea-level rise, rapid Arctic ice loss, extreme storms. Without action, the IPCC is expected to warn, these impacts will get much worse, threatening the future of everyone – but particularly the most vulnerable people living in small island states and along densely populated coastlines.

“For far too long the ocean has not seriously been on the radar screen of the climate change policy community,” said Jane Lubchenco, former administrator of NOAA (National Oceanic and Atmospheric Administration) and co-chair of the expert group which advised on the report. “As a result of this report, it needs to be squarely on the radar screen. These options are going to give us some powerful new tools in the toolbox.”

The report, commissioned for the High Level Panel for a Sustainable Ocean Economy, a group of heads of government, explored five scenarios in which a healthy ocean could help mitigate climate change, develop a sustainable ocean economy, protect coastal communities from storms, provide jobs and improve food security:

The fifth option explores carbon-based storage options such as injecting CO2 into the seabed or fertilising the ocean with nutrients to stimulate the growth of carbon-locking biomass. But such geoengineering methods have not been factored into emission reduction potential because of the uncertainty and risks that surrounds them. 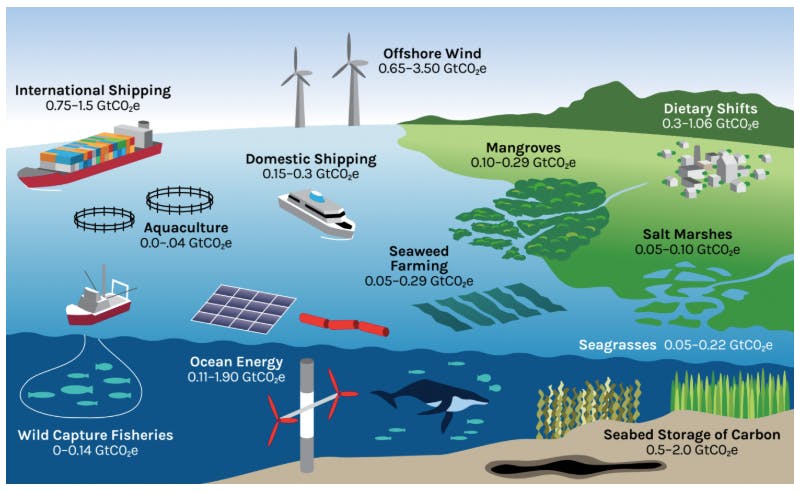 Ocean climate solutions and their potential annual greenhouse gas reductions in 2050 (Source: The ocean as a solution for climate change)

“The first four opportunities are ones for which we have sufficient information that there are good mitigation benefits but also strong co-benefits to other parts of the social-environmental-economic nexus. These should be acted on immediately,” said Ove Hoegh-Guldberg, lead coordinating author, director of the Global Change Institute, and professor of marine science at the University of Queensland, Australia. “[For] the fifth category, additional research and consideration is needed before it is ready to be adopted at the scale that would make a difference from a climate standpoint.”

The High Level Panel was brought together last year by the prime minister of Norway to find workable solutions on ocean health. With 14 serving heads of government from Australia, Canada, Chile, Fiji, Ghana, Indonesia, Jamaica, Japan, Kenya, Mexico, Namibia, Norway, Palau and Portugal, it represents around 30 per cent of the world’s coastlines, 30 per cent of exclusive economic zones, 20 per cent of ocean catch and 20 per cent of the global shipping fleet.

In addition to releasing its report, leaders also issued an urgent “call to action” on a number of ocean-based issues they say would meet both the Paris Agreement and the UN’s Sustainable Development Goals, including investment in the nature-based solutions that already exist and expanding ocean observation and research.

Nature-based solutions are a key part of ongoing climate negotiations that will feature heavily on the agenda in New York this week, as well as at the upcoming climate Conference of the Parties (COP) in Santiago, Chile, in December, and the biodiversity COP in Kunming, China, next October.

China and New Zealand are co-chairing the nature-based solutions workstream which will examine the potential of reforestation schemes and the expansion of grasslands and wetlands to absorb greenhouse gases.

On Friday, the IUCN published a report on nature-based solution pointing out that over 70 per cent of nationally determined contributions to reducing emissions refer to restoring or conserving forests, but only 20 per cent of these include quantifiable targets, and only 8 per cent include targets expressed in tonnes of carbon dioxide equivalent.

Ahead of a key UN ocean summit in Lisbon next June, several members of the panel have also announced pledges on ocean action. Among them, Norway has committed to halving its shipping emissions by 2030; Fiji has promised to make its shipping sector 100 per cent carbon-free by 2050; Kenya will incorporate “blue carbon” ecosystems into its nationally determined contributions; and Mexico will declare an additional 31 areas as fish refuges.

The UN secretary-general’s special envoy for the ocean, Peter Thomson, said: “The world already has the technologies it needs to put ocean-based climate solutions into motion. To stay true to the Paris climate agreement and hold warming at 1.5C, we urge all states to include ocean-based climate solutions in their revised nationally determined contributions next year.”