CATL, the world’s largest electric vehicle battery maker, is the latest Chinese company to invest big in Indonesia’s EV supply chain. A new US$2 billion “green fund”, set up by the Tesla supplier in partnership with an Indonesian sovereign wealth fund, was announced at the Bali G20 summit.

Indonesia, already the world’s largest nickel producer, has been on a campaign to attract investments to secure further dominance over the global supply of key battery metals, essential for the production of electric cars. Its biggest backer right now? China.

In recent months, Chinese companies have been upbeat about the prospects of Indonesia emerging as a global nickel hub and rushing to strike new deals with counterparts in the resource-rich country. The latest partnership, announced at a business conference held on the sidelines of the G20 summit in Bali on Monday, is between China’s battery maker Contemporary Amperex Technology (CATL), Chinese investment company CMB International (CMBI) and Indonesia’s sovereign wealth fund.

A jointly-invested “green fund”, to be set up by the Indonesia Investment Authority (INA), will get up to US$2 billion worth of financing from the Chinese firms. The fund will provide capital for building and strengthening an “end-to-end value chain” for electric vehicle (EV) production in Indonesia, said chief executive of INA Ridha Wirakusumah.

This value chain likely includes the production of battery and battery metals.

In a joint press release, parties who inked the memorandum of understanding highlighted Indonesia’s strategic ambitions to “become a meaningful player in the global EV supply chain”, citing how the nation is home to one-quarter of the world’s nickel reserves, nickel being a key material in the production of batteries.

“By leveraging Indonesia’s core advantages as a key producer of green raw materials, its growing domestic vehicle market, as well as each party’s strengths, network and resources, the fund aims to deliver attractive long-term sustainable returns to its investors.”

Last month, Indonesia started floating the idea of establishing an Opec-style cartel for nickel and other key battery metals. The Organisation of Petroleum Exporting Countries or Opec is a group of 13 oil-producing nations that works on coordinating the production and pricing of the commodity.

At the G20 summit, Indonesian investment minister Bahlil Lahadalia also raised the idea to Canada during talks with his counterpart at a ministerial meet. Canada is the sixth biggest nickel producer in the world.

For CATL, as well as other Chinese companies invested in the EV battery supply chain, the prospect that 50 per cent of the world’s refined nickel will be supplied by Indonesia by 2030 is extremely attractive. China, the world’s largest auto market, saw NEV sales continuously break new ground last year, almost tripling from 2020, and the demand has driven up prices for raw materials in the sector, including that of nickel.

The major power, however, holds less than 3 per cent of the world’s total nickel reserves. An export ban on raw nickel exports by Indonesia, in place since late 2020, has prompted China to sink more money into the Southeast Asian nation, said observers.

CATL, which supplies electric automaker Tesla with batteries for the vehicles it builds at its Shanghai factory, also joined a US$6 billion venture in Indonesia in April this year by partnering with local state-owned groups to build a mining-to-batteries complex.

CATL chairman Zeng Yuqun, also known as Robin Zeng, in a fireside chat organised at the sidelines of the G20 summit, acknowledged that global electric vehicle makers are eyeing Indonesia and its huge reserves of nickel, but emphasised that CATL is committed to helping Indonesia develop a “green” battery industry. 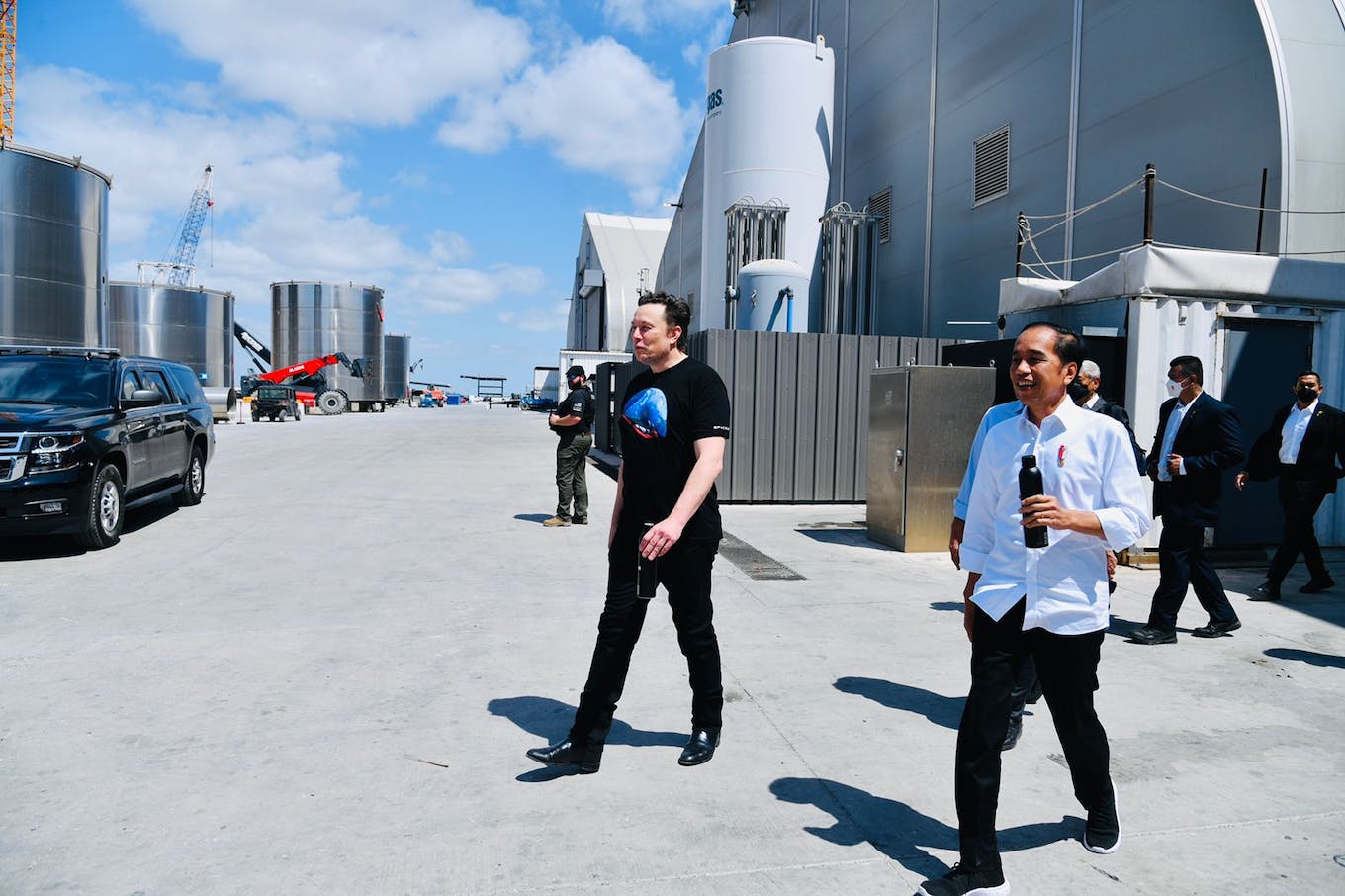 President Jokowi (right) with Elon Musk on a SpaceX visit in Boca Chica, Texas, when he made an official visit to the United States in May this year. Image: Laily Rachev / Presidential Secretariat

When asked if the battery industry can really be environmentally-friendly, with the impact of nickel mining now under the spotlight, Zeng highlighted how two of CATL’s plants in China are now recognised under an initiative developed by the World Economic Forum for their low carbon emission efforts. These include its battery cell plant in the city of Yibin in southwest China’s Sichuan province and its Ningde facility.

WEF’s Global Lighthouse Network seeks to convene a community of manufacturers that have shown leadership in the adoption and integration of cutting-edge technologies. CATL’s facilities adopts artificial intelligence and flexible automation on top of other digital initiatives and have achieved zero carbon emission, said Zeng. There are currently only two Lighthouse factories in the battery industry globally.

“With technology and the use of renewable energy, we can ensure that the manufacturing process of EV batteries is green. When it comes to raw material mining, we do, however, have a long way to find out what it is that we need to do, but we are committed to working on it,” said Zeng.

According to data from the Indonesia Ministry of Investment, Chinese investment into Indonesia reached US$1.56 billion between July and September, up from US$595.61 million in the same period last year. It is a steep rise driven by demand for raw materials in manufacturing – more than 1,150 new Chinese investment projects were recorded in the quarter, most for downstream projects, which includes the refining of minerals before sale back to factories in China.

Joining in virtually at the summit on Monday was also co-founder and chief executive of Tesla Elon Musk. Commenting on Indonesia’s ambitions to become an EV hub, Musk said that he believes the nation will make a great contribution to the global supply chain, given its reserves of raw ingredients critical to EV manufacturing, as well as its potential for renewable energy generation.

“Indonesia has an exciting bright future…I am bullish on Indonesia,” he said.