There may be a mismatch between the biggest sustainability issues humanity face and what entrepreneurs are interested in. High costs of new green tech is also hindering adoption, experts said at the launch of The Liveability Challenge 2022.

Industry professionals are urging entrepreneurs keen on addressing environmental issues to look beyond trending topics to make a larger impact.

They add that bringing down the cost of existing technological solutions to climate change is also important, in a dialogue organised by Eco-Business on breakthrough green innovations.

Paul Santos, managing partner of venture capital firm Wavemaker Partners, said that based on his firm’s research in Southeast Asia, vehicles contribute to about an eighth of total carbon emissions, but over 60 per cent of venture capital is going towards lower-carbon transport solutions like electric vehicles.

“Entrepreneurs aren’t looking at the other areas. Why? Because they’re just not aware,” said Santos, adding that the bulk of emissions come from agriculture, industrial processes and the built environment.

He cited one of Wavemaker’s portfolio firms, eFishery, as an example of opportunities in overlooked sectors. The start-up is earning millions of dollars in revenue selling automated feeding systems that reduce waste to fish and shrimp farms across Indonesia.

Last week, the start-up raised US$90 million in a fresh round of funding, and is looking to expand the business to countries like China and India.

“What’s exciting for me is working with these entrepreneurs in the businesses that didn’t seem so sexy at that time and seeing them break through, seeing the impact that they can have,” Santos said.

She added that the nexus between technology and electricity generation is ripe for innovation, citing sensor technology to monitor power usage.

“They’re not aware of other similar technologies that are at a more advanced stage or sometimes competing technologies solving the same problem but coming from a different angle,” he said. “When you’re embarking on something where you’re not really planning to hit the market for years, you can’t really afford to be making decisions in the absence of that intelligence.” 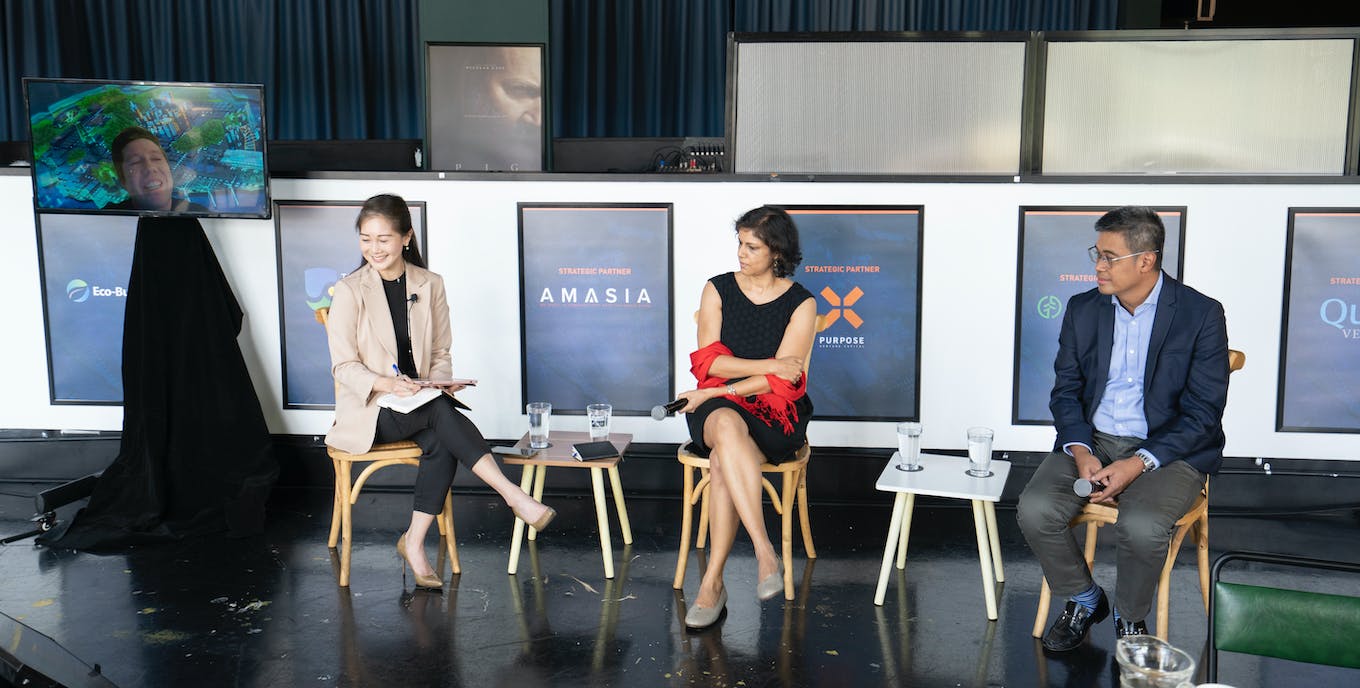 There was also a discussion about finding meaningful innovations.

“It is tempting to say that the technology should be simple, or the solution should be something that’s easily and widely adopted,” said Bambawale. “That’s not true because sometimes the best solutions require systemic change.”

Bambawale cited the example of solar power technology, which once matured, became a mainstream energy source.

“The tricky part is, what time frame are we looking at?” she added, noting that solar power took 30 years to become widely adopted.

Inagaki said that to achieve such systemic change, bringing down the cost of green technologies should also be a focus of research and development, citing the example of “green” hydrogen fuel – made from splitting water atoms with renewable energy.

Green hydrogen is currently selling at US$3-7.50 per kilogramme, several times higher than natural gas, a fossil fuel. Hydrogen could replace natural gas in industrial applications and power generation, and some countries have started to test out injecting hydrogen into natural gas pipelines.

“We’ve been able to make hydrogen from water and electricity for a long time. But again, it’s the economics,” he said. “For the hydrogen economy to exist, you need systemic change. But one of the main hurdles is: can you make green hydrogen while bringing down the costs?”

Inagaki added that several emerging breakthrough solutions, such as sustainable aviation fuels and capturing carbon dioxide from the air, are technologically possible but lack cost competitiveness.

Both are nascent technologies that have yet to scale up. Direct air capture of CO2 has also been deemed economically unviable because it requires up to US$600 to capture one ton of CO2, but there are attempts to lower the cost to about US$100.

Bambawale added that cost considerations may also hinder large firms from investing in innovation, as would regulatory uncertainty. On the sidelines of the event, she told Eco-Business that one example of a regulation was private power-purchase agreements in the solar industry, which allow firms to sell power directly to end-users. Such deals are becoming more common, but they remain complex in Indonesia, and are relatively new in Vietnam.

The panellists were speaking at the launch of The Liveability Challenge, an annual contest to find innovations to make Asia’s cities healthier, greener places to live. The event has been run by Eco-Business and Temasek Foundation, a charity arm of Singapore state investor Temasek Holdings, since 2018.

The winner will receive S$1 million in project funding. Past winners include US start-up SeaChange, which sought to extract carbon dioxide from the sea, and lab-grown food firm TurtleTree Labs.