Is the coffee pod craze brewing an environmental disaster?

[Magazine Exclusive] Environmental groups have long expressed concerns about the waste generated by increasingly popular coffee pods. How far do manufacturer efforts to promote recycling address the issue, and what’s the most sustainable way to obtain that daily caffeine fix?

A normal day at the office turns apocalyptic when a Godzilla-like monster made of coffee capsules invades a city, destroying property and crushing citizens underfoot. Alien spaceships bearing an uncanny resemblance to coffee pods shoot citizens and armies with capsules-turned-bullets. 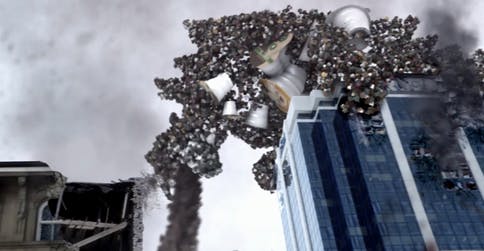 A still from the Kill the K-Cup video, depicting a monster made of coffee pods destroying a city. Image: Youtube

These scenes from a video campaign called “Kill the K-cup” – the brand name for coffee pods made by American company Keurig – might be confined to the realm of fiction, but the waste footprint of these disposable pods is all too real.

In 2013, the number of coffee pods made by one company alone – America-based Keurig Green Mountain – was a staggering 8.3 billion, enough to wrap around the equator 10.5 times. Factor in the pods made by other companies and the number becomes mind-blowing.

The growing popularity of such pods in homes, offices, and even Michelin-starred restaurants worldwide has fuelled concerns about the amount of waste generated.

Worldwide sales of coffee pod machines have more than doubled from 11 million in 2009 to 29.2 million last year, according to market research firm Euromonitor. In Asia Pacific, 1.1 million units were sold last year, three times as many as in 2009.

In affluent cities like Singapore and Hong Kong, 66,900 and 21,300 machines were sold last year respectively. In Singapore, that is a six-fold increase from the 9,700 machines sold in 2009.

Market research firm Mintel also found that Asia - where waste recycling capabilities are lagging behind the consumption patterns of a growing affluent class - is the world’s second-most valuable coffee market, after Western Europe.

While brands such as Keurig and Starbucks do not have a large presence in Asia Pacific, Nestlé’s Nespresso and Dolce Gusto and Coffee Bean and Tea Leaf are growing in popularity and are among the commonly available models in the region.

These companies vary widely in how they make their pods and their efforts to minimise the waste they cause.

Nespresso, which had nearly 26 per cent of the global market share last year according to Dutch multinational Rabobank International, makes its pods out of aluminium, which it considers the best material to protect the aroma and freshness of the coffee. The company, founded in Switzerland in 1986, launched the first Nespresso machines in Singapore in 2007.

Matthieu Pougin, Singapore country manager, Nespresso, told Eco-Business that “all components of the Nespresso capsules are recyclable”. Coffee grounds end up fertilising a local organic farm while aluminium is recycled into products such as window frames, he said.

Nespresso, however, did not disclose what share of total capsules sold actually made it back to its recycling centres. This, Pougin said, is because recycling rates vary depending on consumer behaviour, making them an “inherently inaccurate” indicator of the company’s recycling efforts.

He said that Nespresso has had the ability to collect back and recycle 100 per cent of its capsules in Singapore since 2013. Globally, its recycling capacity rate stands at over 80 per cent, and it plans to raise this to 100 per cent by 2020.

This is part of the company’s CHF500 million (S$664 million) ‘Positive Cup’ initiative, launched last August, which aims for all Nespresso coffee to be ethically sourced and for all the aluminium used to be recycled or sustainably managed. The company wants to be carbon neutral by 2020.

Nespresso’s parent company Nestle also introduced a cheaper system called ‘Dolce Gusto’ to Singapore markets in 2011. These machines, which sometimes require two capsules per cup of coffee, use pods that are not currently recyclable.

Philippe Aeschlimann, corporate spokesperson, Nestlé, said that this is “due to the complex nature” of Dolce Gusto ‘Smart Capsules’, which can regulate the pressure of water flowing through them, so that high-pressure espressos and gently frothed milk can be produced by the same machine.

“We work very closely with all our packaging suppliers to ensure that the performance of our packaging is regularly improved and we take advantage of any technological advances,” he added.

Coffee Bean and Tea Leaf, which launched its single-serve CBTL System in Singapore in 2011, did not respond to Eco-Business’s queries.

When contacted, the company’s US headquarters also declined any comment. The company also has no articulated sustainability policy or information on the recyclability of their products, save for a remark in a product manual stating that the “appliance and the packaging materials are made of high quality materials that can be reused or recycled”.

Globally, Starbucks says that the coffee pods used in its Verismo machines can be disposed with recyclable plastic waste, while Keurig makes most of its pods from a special blend of plastics called #7, which is not recyclable in most places. It has pledged to make 100 per cent of its pods recyclable by 2020.

Consumers should avoid pod systems that are not recyclable, and tell the world you won’t until they can be [recycled]. It is the consumer that can create change with these delinquent corporations by pressuring them.

However, critics say these companies are not moving fast enough.

Mike Hachey, chief executive of Egg Studios, which is the Canadian company behind the Kill the K-Cup video and a petition demanding that Keurig make its cups universally recyclable sooner than 2020, tells Eco-Business that “right now, we can poke too many holes in Keurig’s sustainability plans and that’s hurting them”.

Consumers should avoid pod systems that are not recyclable, and “tell the world you won’t until they can be [recycled],” he says, adding that “it is the consumer that can create change with these delinquent corporations by pressuring them”.

But while waste is certainly a big part of the coffee pod conundrum, there is more to a sustainable cup of coffee, say environmentalists.

Eugene Tay, director of sustainability consultancy Green Future Solutions, notes that manufacturers should address all stages of the life cycle of their products. These include the type of farming practices employed in bean cultivation, manufacturing processes, packaging, the energy and water efficiency of the machines, transport and distribution, and how easily the machines can be recycled or repaired.

A holistic analysis of these factors might yield some surprising results. A 2009 life cycle analysis of three different types of coffee carried out by global research firm Quantis found that all things considered, drip filter coffee has a higher environmental impact than instant or pod coffee.

For their own coffee pods, Nespresso conducted an internal analysis to determine that the highest volumes of greenhouse gases are produced when growing coffee and using the Nespresso machine.

To address this, Nespresso implemented measures such as supporting coffee farmers to adopt sustainable agriculture practices and making their machines more energy and water efficient. This successfully reduced the carbon footprint of each cup of coffee by more than 20 per cent between 2008 and 2012. 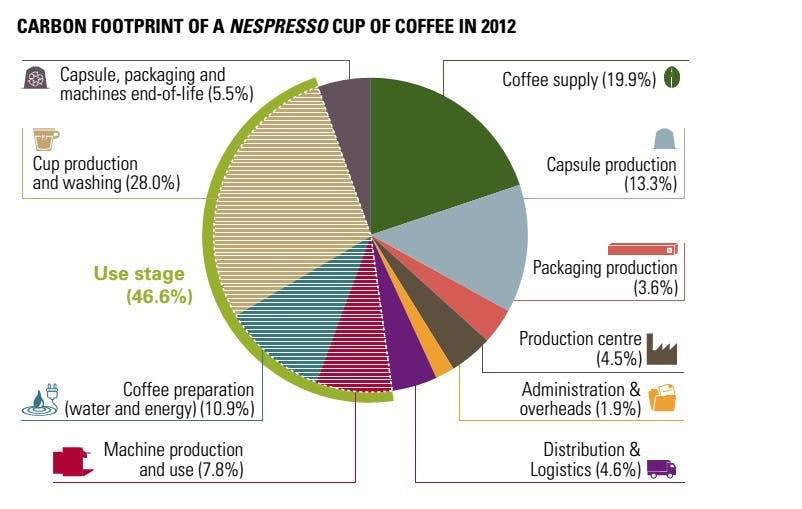 Breakdown of the carbon footprint of a cup of Nespresso coffee in 2012. Image: Nespresso

Similarly, despite the recycling limitations on Dolce Gusto’s capsules, the company has reduced the life cycle carbon footprint of Dolce Gusto coffee by 32 per cent and reduced the water used in the process by a quarter since the product’s launch in 2006.

Despite growing concerns about the industry’s sustainability, all signs point to the fact that coffee pods are here to stay, waste issues and all.

For example, numerous tutorials on how to refill and reuse capsules of all brands have been uploaded by users on YouTube and ‘do-it-yourself’ tutorial site Instructables.

Last November, a New Zealand duo launched the ‘Honest Coffee Company’, which sells Nespresso-compatible pods that are made from plant based materials and biodegrade “one and a half years earlier than an orange peel”.

While these capsules are comparable in price (and sometimes even cheaper) than Nespresso’s own capsules, they currently ship only to Australia and New Zealand.

This February, US-based Rogers Family Company also launched the ‘Freedom Clip’, a tool that Keurig machine owners can use to override a sensor which only accepts Keurig-brand pods. This paves the way for users to choose the company’s ‘One Cups’, which are 97 per cent biodegradable.

“What’s more important is that these pods and sachets should be made from materials that are compostable or recyclable,” he says.

In fact, users can take steps to make all methods of coffee preparation more sustainable, he adds. Boiling only as much water as is required and choosing more energy efficient machines are some examples.

Just as consumers should be mindful about their coffee habit, Hachey adds that companies must also do their part in mitigating the environmental impact of their products.

He points out that a deal between The Coca-Cola Company and Keurig last year to launch a system that will allow users to make Coca-Cola beverages at home “could see the onslaught of cold beverage pods and an even more disastrous outlook for our environment”.

Instead, he says, companies “need to look at their environmental footprint and ask themselves if are they being responsible corporations.”

This story was originally published in the Eco-Business Magazine. Download the latest issue here.