Here's a new tissue that could help wipe out deforestation

There is a growing array of products made of bamboo in the market today - from bicycles to sunglasses - offering sustainable alternatives to timber and other forest products.

The new line targets environmentally-conscious consumers looking for products that do not destroy natural resources while costing the same as traditional options. Tissue paper products are often produced from the virgin pulp of trees grown in timber plantations.

The problem is that much of the land cleared for these plantations were once forest areas, which are rich in carbon stock and natural habitats for wildlife such as orangutans and tigers.

NooTrees’s range of bamboo-fibre tissue paper and wet wipes presents a viable solution to the environmental problem of deforestation and also offers a skincare product that is hypo-allergenic, the firm said in a statement.

The recent haze pollution caused by the burning of peatland and forested areas in Indonesia has increased awareness among Singaporean consumers of the implications of deforestation. 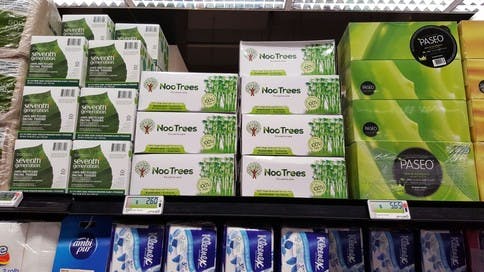 However, despite zero-deforestation pledges by pulp and paper companies, some pulpwood suppliers are still linked to illegal burning of plantations. These plantations are putting companies’s supply chain at risk of violating their own commitments - and thus, ending up selling products that could be linked with forest destruction and air pollution.

Companies’s transparency is also called to question as the traceability of the raw materials is hampered by insufficient data. For example, sometimes nobody knows who or which company owns a patch of land that is burning.

David Ward, who founded the brand in November last year and is general manager of NooTrees, said that he is confident that the brand will find a following in Singapore who are supportive of companies that truly make a positive impact on people’s lives.

Experts advocating bamboo as an alternative source to timber and other forest products say the plants have enormous potential to protect the natural environment because of their strong root systems to combat soil erosion. The plant also grows fast and therefore, can lock up carbon dioxide from the atmosphere, helping mitigate climate change.

Ward noted that scientists have been searching for alternative fibres for the tissue paper sector. “Bamboo consistently comes out as the best long-term alternative and best possible future material to match the growing future demands for toilet and tissue paper as the world population increases,” he explained.

He told Eco-Business that NooTrees only works with bamboo pulp manufacturers that are certified by the Forest Stewardship Council and International Standards Organisation.

There is continued interest in bamboo, which has now become a booming US$6 billion industry in China, Ward stressed. He added that the plant has a high regeneration rate and the ability to produce five to six times the amount of paper pulp per hectare compared to regular trees.

NooTrees said its products’s biodegradability compared with conventional polyester-based wet wipes also addresses the issue of waste management. Because they biodegrade within 45 days in a landfill, they do not end up as waste that clogs wastewater pipes and recycling plants.

“We are starting in Singapore as we want to make a positive impact to the people living here and then elsewhere across the region and the world,” said Ward.

And yes, NooTrees confirmed that no critically-endangered wildlife, especially pandas, were deprived of their food sources in the making of these tissue products.