HER Planet Earth first all-female team to fatbike across Greenland

The 10-member team undertook the 200km expedition to highlight the connection between the melting ice sheet in Greenland and rising sea levels in Asia.

A team of 10 women from the  women’s advocacy group HER Planet Earth became the first ever all-female team to fatbike across Greenland’s Arctic Circle Trail in winter.

After six months of gruelling training, the team undertook the 200km expedition over six days in March 2020 with the objective of raising funds and awareness for vulnerable women in Asia who are disproportionately affected by climate change.

To date, HER Planet Earth has raised close to S$100,000 for UN Women UK, to support the economic empowerment of women in rural areas of Asia who are most affected by climate change, particularly Vietnam, Bangladesh and Nepal.

“Women are the best solution to mitigating this climate crisis as they’re often on the frontlines of climate change. When you help women, you’re helping the planet. There’s a big ripple effect,” said Christine Amour-Levar, founder of HER Planet Earth.

Greenland, home to the largest body of frozen water in the northern hemisphere, was chosen for HER Planet Earth’s seventh expedition due to growing concerns related to global warming and rising sea levels.

Covering roughly 80 per cent of Greenland’s land mass, the ice sheet is now melting seven times faster than it did during the last decade of the 20th century. With 3.8 trillion tons of ice lost in the last 26 years, the massive ice sheet has contributed 1.1 centimetres to sea level rise.

Experts estimate that if the average rate of Greenland’s ice loss continues, global sea levels could increase by as much as 7-13 centimetres by the end of the century. This figure translates to approximately 400 million people exposed to coastal flooding by 2100.

While all coastal cities will be affected by rising sea levels, Asian countries will be hit much harder than others due to their population, economic activity, and landmass. 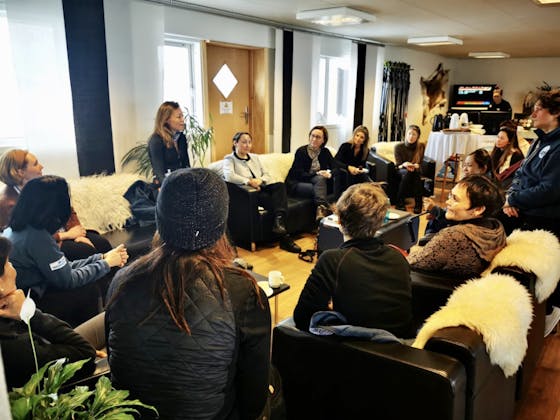 HER Planet Earth in a meeting with local female leaders in Sisimiut, Greenland, to discuss how climate change has affected their lives.

Almost four out of every five people impacted by sea-level rise by 2050 will live in East or Southeast Asia. Other factors that make Southeast Asia particularly vulnerable to rising sea levels include the fact that it is heavily influenced by tectonics, which can cause land to either rise or sink during earthquakes.

Recognising the important link between Greenland and Asia, Amour-Levar said: “We chose Greenland because it’s directly connected to what’s happening in our region, even if people may not see that right now.”

“The glaciers will keep melting as the climate warms. Climate change is already affecting vulnerable communities now, it’s not something that will happen in the future,” she added.

The expedition culminated in a meeting with climate scientists, local Inuit people and female leaders in the country to discuss how climate change has affected life on the island and the importance of gender equality.

The local leaders said that increasing numbers of people have witnessed the calving of glaciers for themselves and observed changes in the movement of animals. In recent years, polar bears have been coming closer to the towns in search of food, Amour-Levar shared.

Greenland’s strategic importance has grown recently amid increased shipping in the Arctic and international competition for rare minerals. But these economic opportunities bring added environmental and social challenges for both Greenland’s 56,000 residents, and the rest of the world.

“Even though humanity is facing the coronavirus now, let’s not forget about climate change. Our biggest struggle is ahead of us, and that’s the climate crisis. It affects the whole of humanity as well,” said Amour-Levar. 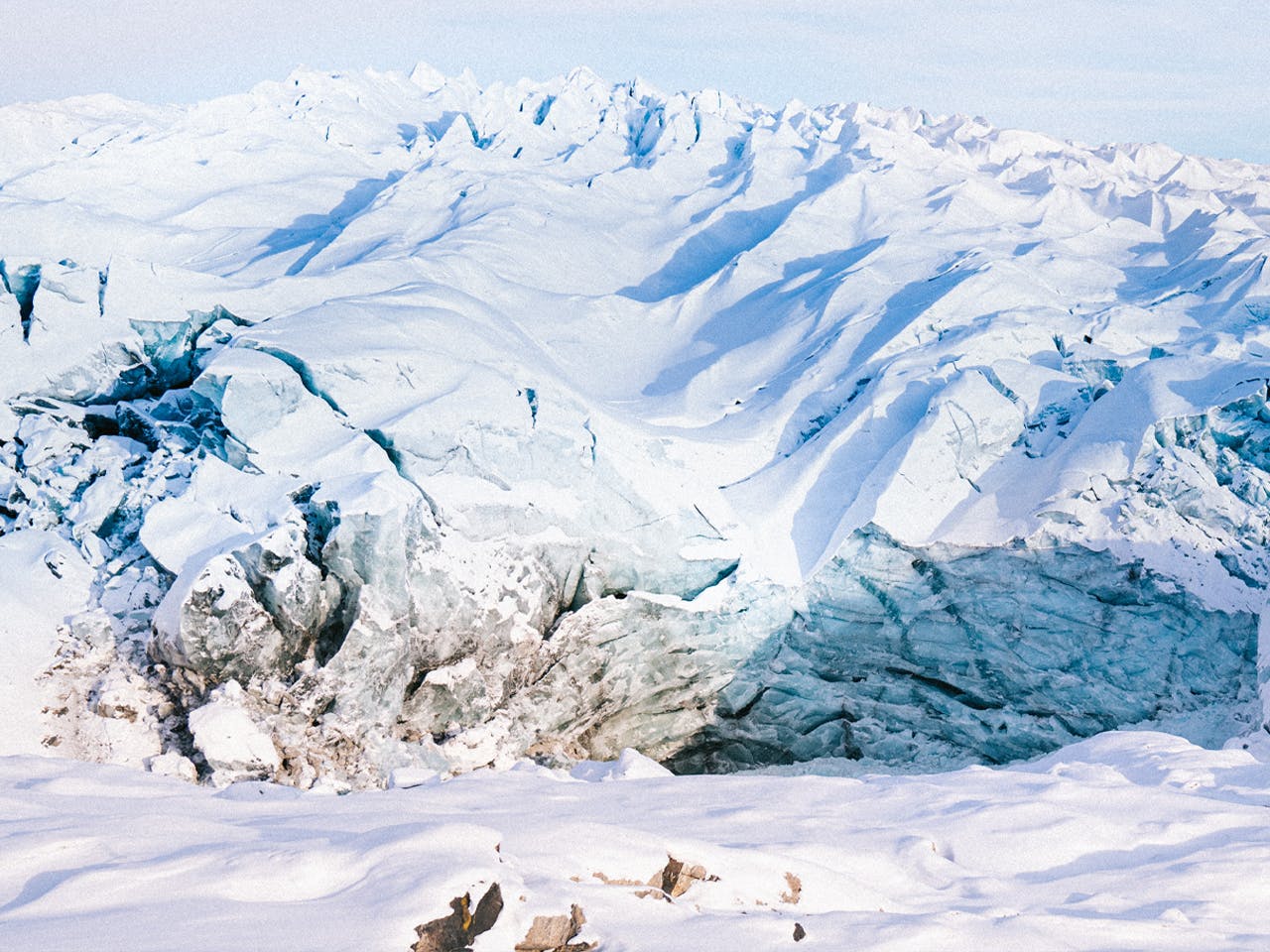 The Russell Glacier is an impressive, jagged ice wall that reaches 60 metres in parts and stands in sharp contrast to the surrounding land and icescapes. “These structures can calve and break at any time, so it is important to remain a safe distance from the glacier.” warned local guide, Bo Lings. Image: Sandra Lim 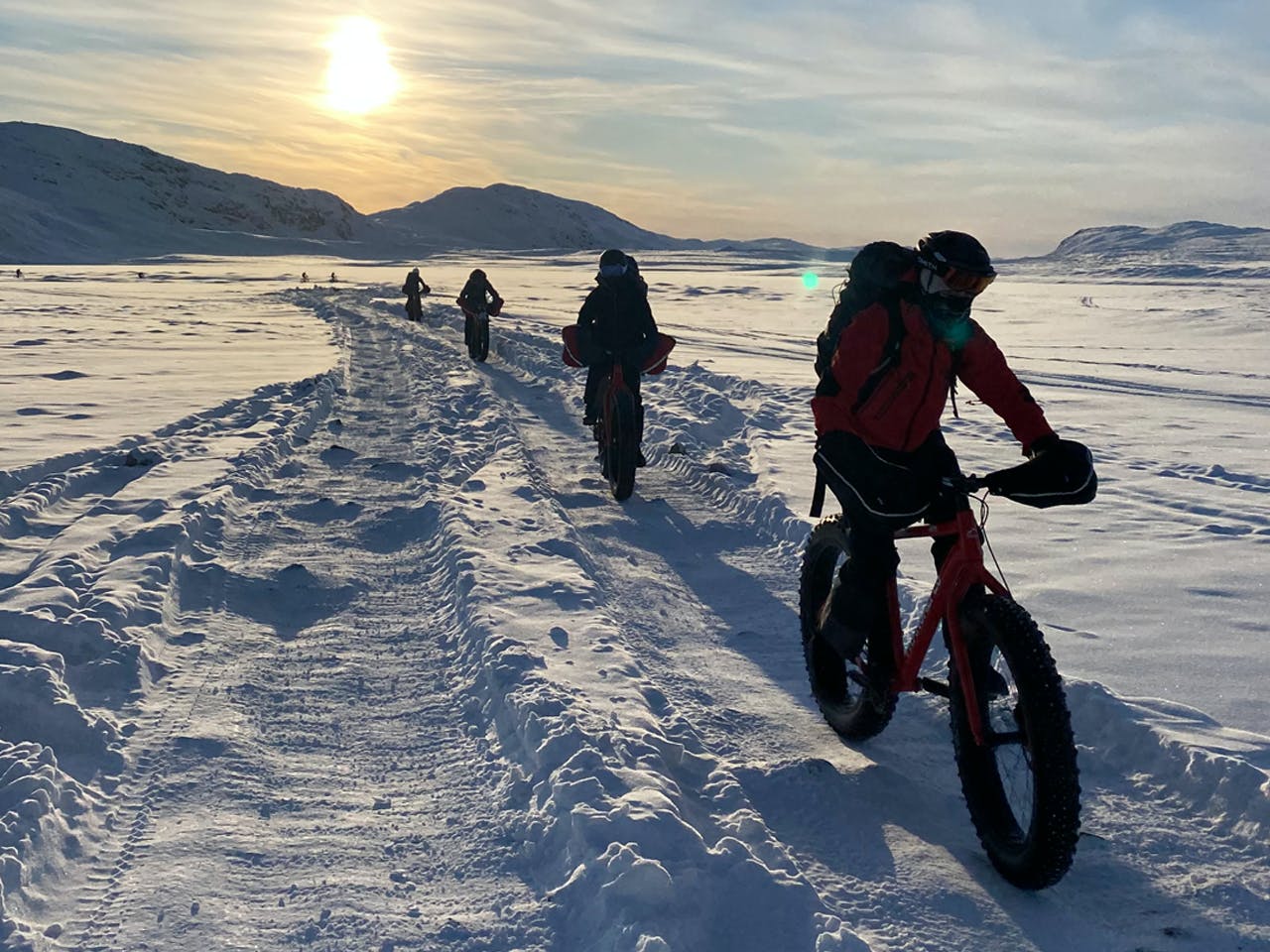 The team covered 26km by bike to reach their accommodation on the first day. The snow around the glacier was powdery, thick and slippery, and they struggled to get traction, even with the wide tires of their fat bikes. Image: HER Planet Earth 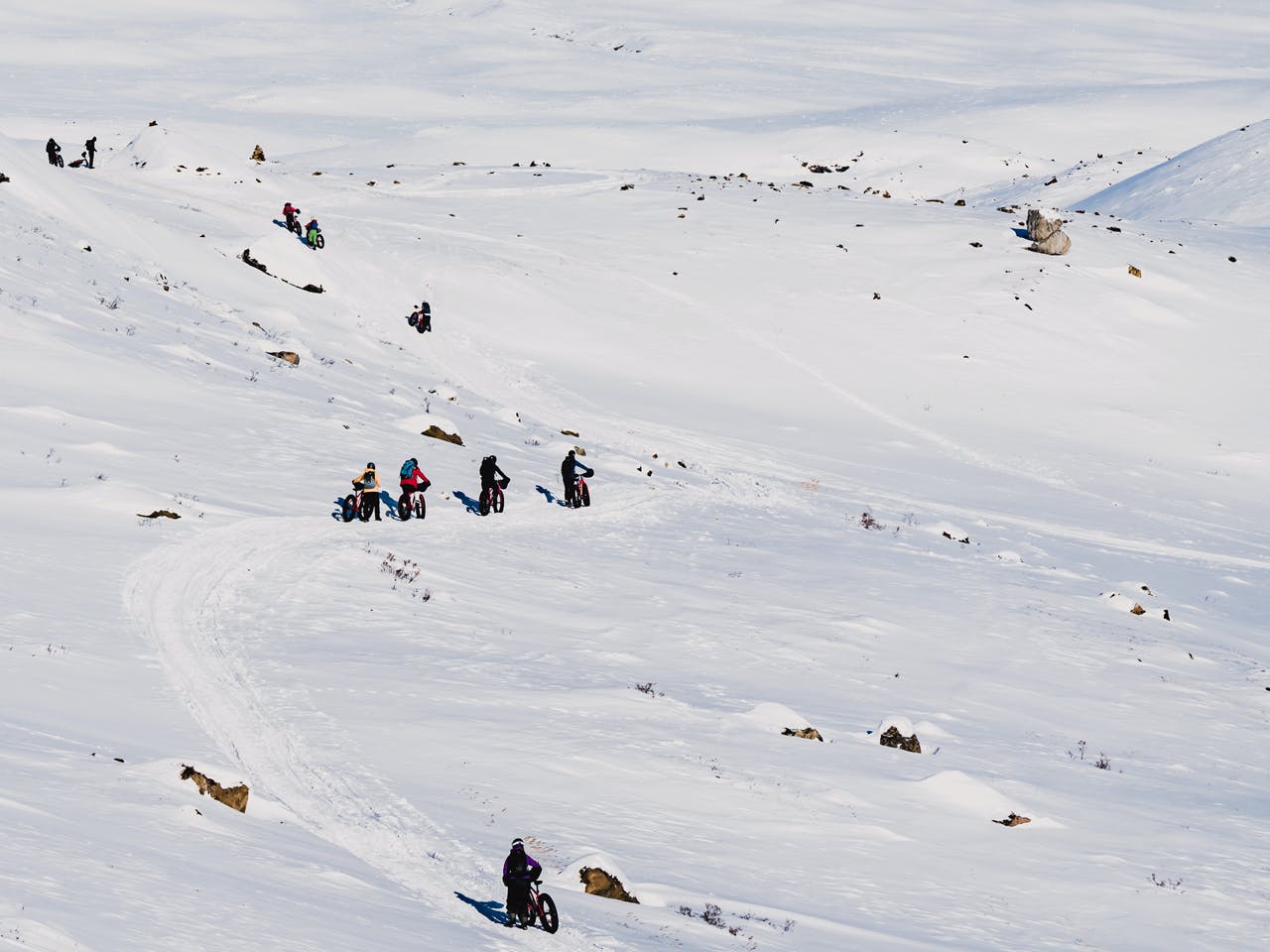 There was no time for rest as the team cycled for ten hours on day 2 in the interminable white desert. Image: Sandra Lim 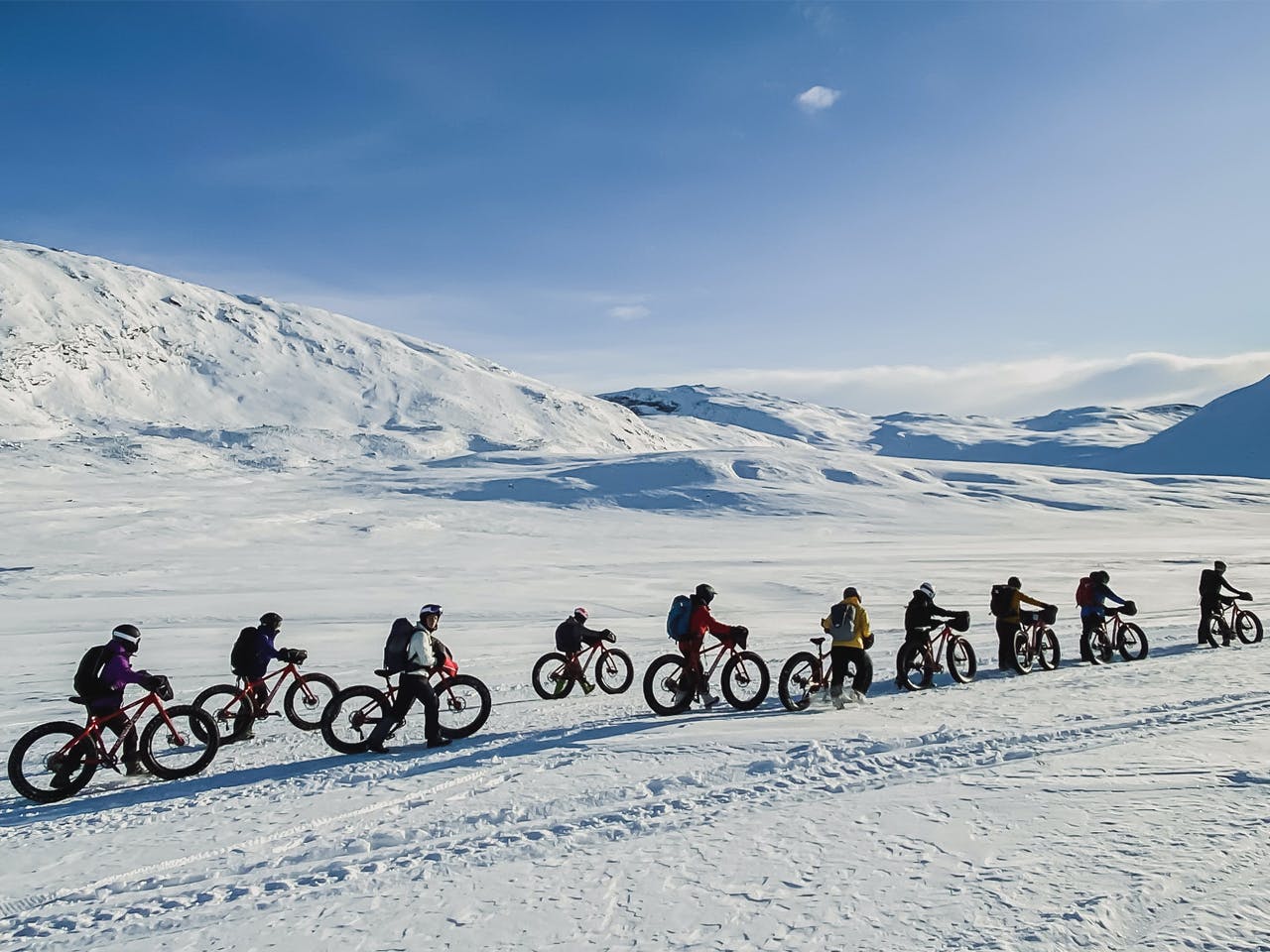 During their journey, the team rode on all types of terrain, from hard packed and powdery snow, to ice, mud and rock. Soft snow on the trail forced the team to dismount and push their bikes. Image: Sandra Lim 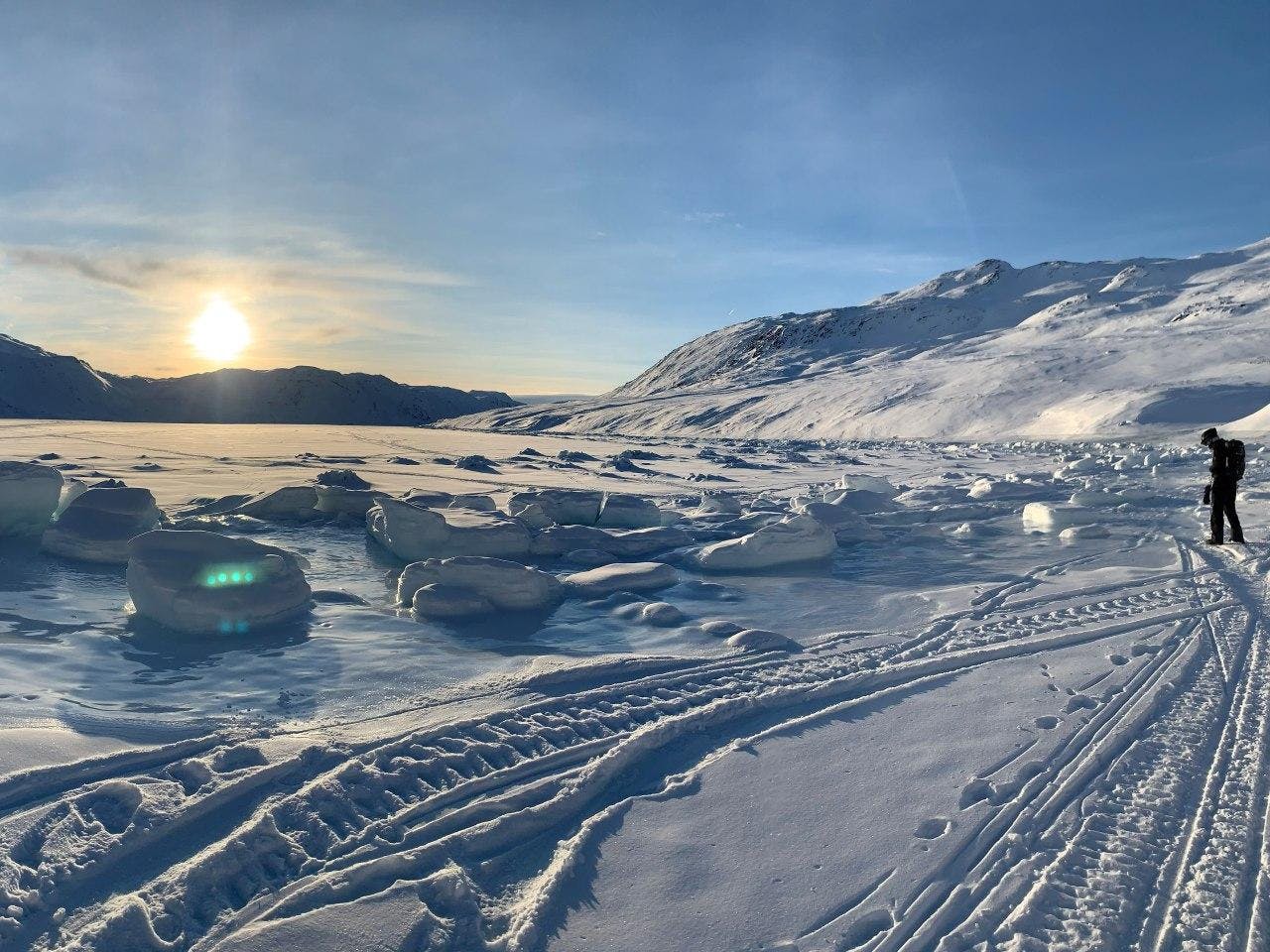 On the edge of a frozen lake at sunset. The Arctic Circle Trail of Greenland is known as the land of a thousand lakes and indeed during their expedition, the team crossed many frozen lakes and fjords. Image: HER Planet Earth 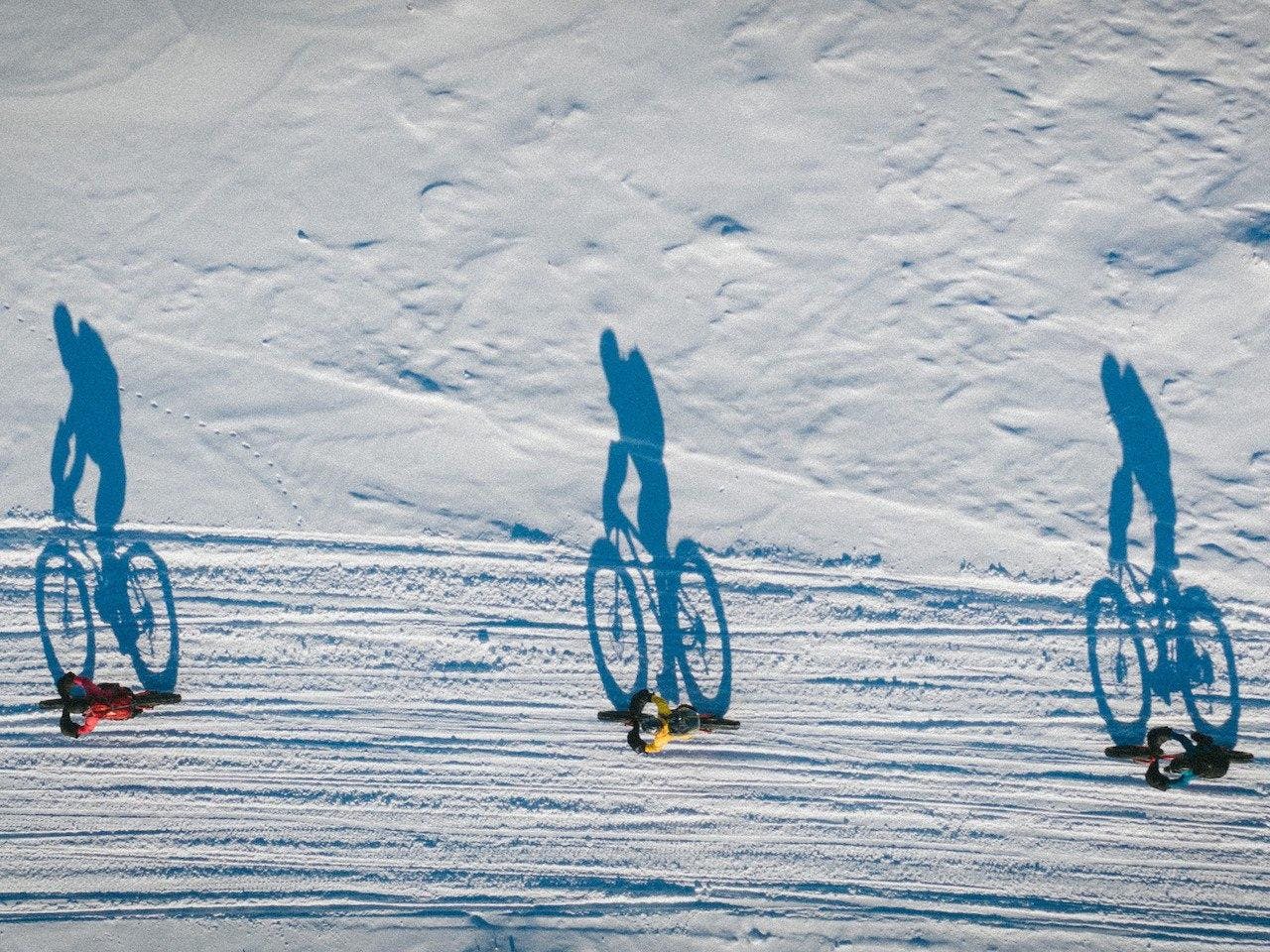 Three teammates’ shadows reflected on the snow as they bike. The team learned to pace themselves together as the extreme conditions emphasised the importance of looking after one another. There was no room for mistakes or complacency. Image: Sandra Lim 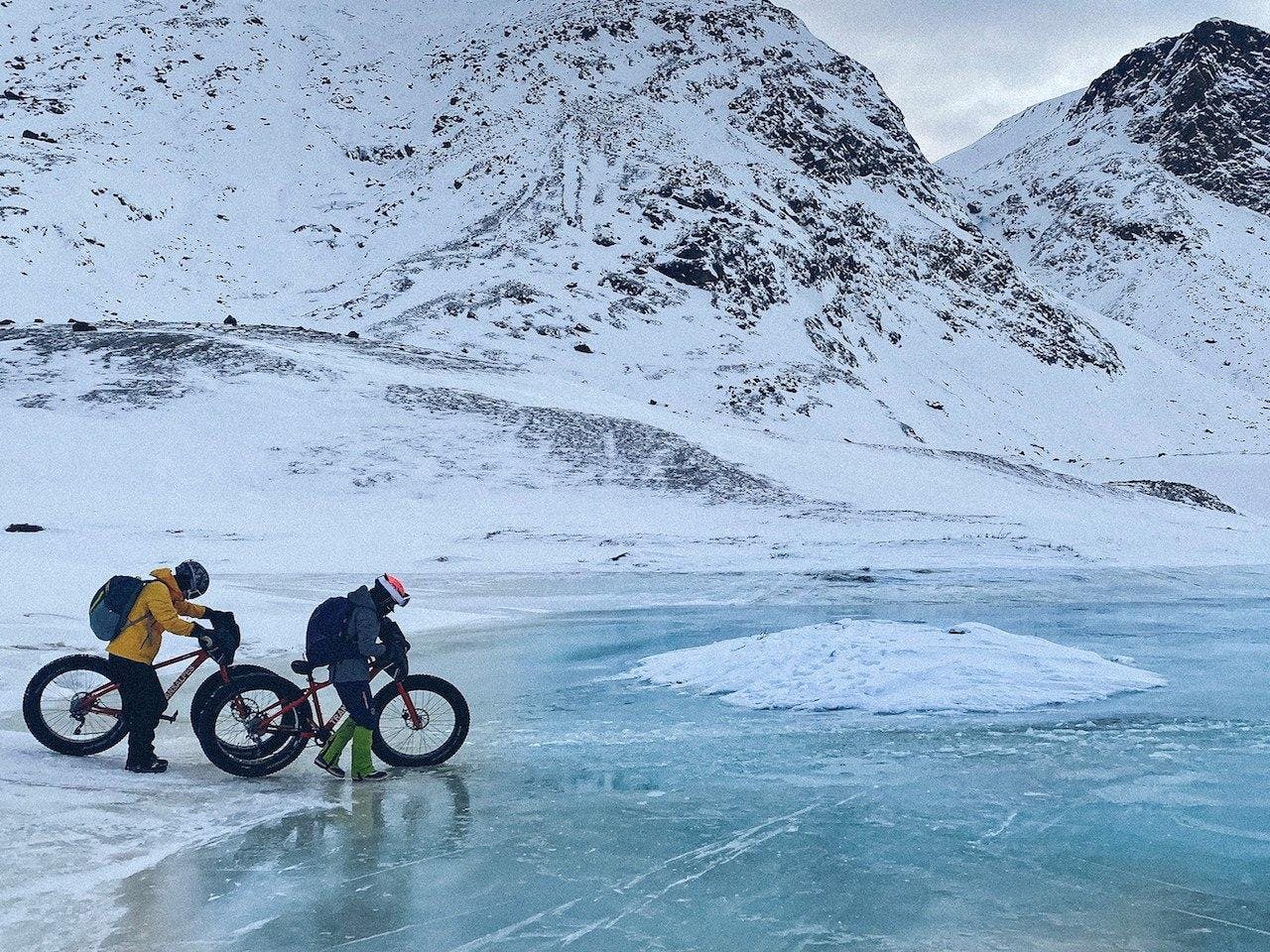 Two teammates walking across a frozen, crackling lake while pushing their bikes. Image: HER Planet Earth 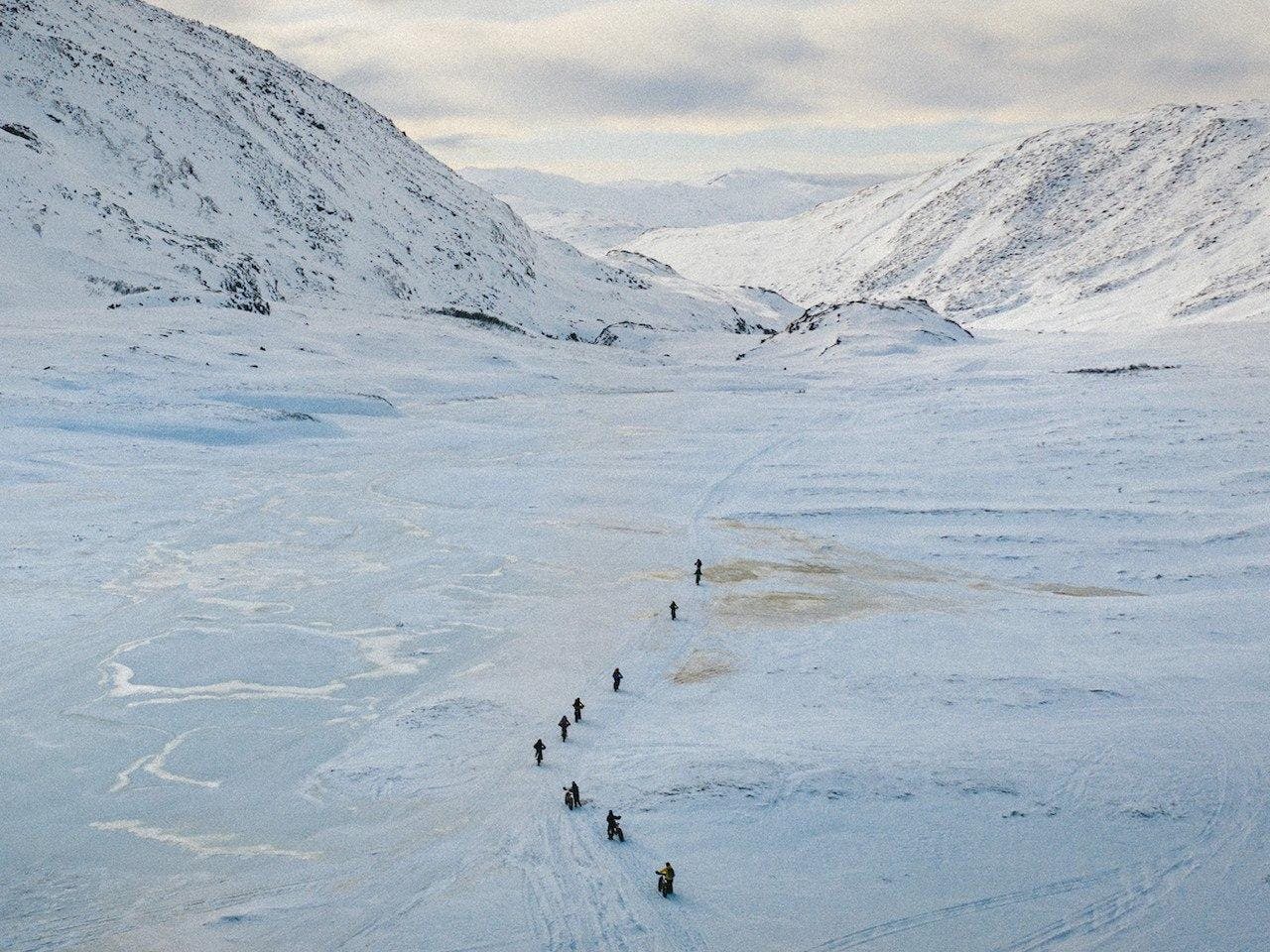 Drone shot of the team biking through a valley. A feeling of isolation and barrenness enveloped the team as they gazed at the vast emptiness ahead of them. Image: Sandra Lim