The melting Arctic is fertile ground for businesses. But continued oil exploration poses an ethical dilemma

Norway’s Arctic residents are facing hardships from rapid warming, which is also affecting communities in Asia. But the Nordic country’s wealth is built on oil, and exploration is moving further north. Can it find a middle ground?

The Norwegian archipelago of Svalbard, which lies halfway between mainland Norway and the North Pole, has seen profound changes in recent decades.

Wintertime temperatures have risen by more than 10°C over the last 30 years. The ocean is almost 2°C warmer than 40 years ago, and its residents see springtime two weeks earlier than before. They are also seeing a greater likelihood of avalanches due to increased rain in winter, said Professor Kim Holmén, international director of the Norwegian Polar Institute.

Residents of Longyearbyen, the Svalbard town where he lives, now feel insecure at home. The change in sentiment is a “very difficult thing to measure but is very obvious”, he said at a seminar on 7 October in Singapore to promote knowledge of the Arctic environment, resources and technologies.

Yet, Holmén believes that environmental and growing business interests in the region need not be pitched against each other.

As temperatures rise and sea ice melts in the Arctic, more businesses are eyeing its potential for aquaculture, oil and gas, minerals, tourism and shipping.

“Yes, there are people out there dreaming of great wealth easily available and consider environmental laws as hampering their efforts, and there’re environmental groups that see that any development is bad. We must find a middle way,” Holmén told Eco-Business on the sidelines of the seminar, Arctic Frontiers – Knowledge for Ocean Sustainability, organised by Arctic Frontiers, a platform for sustainable development in the Arctic, in collaboration with the Royal Norwegian Embassy in Singapore, National University of Singapore (NUS) and state-owned company Innovation Norway.

We have a long tradition of making use of the ocean in a prudent and sustainable manner.

The seminar’s aim, said Arctic Frontiers director Ole Øvretveit, was to present a broader and more nuanced picture of the Arctic instead of the one-dimensional portrayal of the region as a land of polar bears and melting ice.

Ocean resources have provided Norway with food, energy and transport, and the country has a “long tradition of making use of the ocean in a prudent and sustainable manner”, said Liv Lønnum, its deputy minister for petroleum and energy.

Petroleum activities have contributed to the welfare and employment of communities in the northern regions.

As the world’s population grows, so will its demand for energy, oil and gas and minerals, which the Arctic has potential to provide, Lønnum said in her keynote speech. The Norwegian Petroleum Directorate estimates that as much as 65 per cent of undiscovered resources on the Norwegian continental shelf lie in the Barents Sea in the Arctic.

Norway’s petroleum industry has moved further north over time and the Barents Sea is its most unexplored area where “most of our expected but yet unproven oil and gas resources are located”, said Lønnum.

“The government is committed to maintaining a stable framework that contributes to both profitable and sustainable production on the (Norwegian continental) shelf,” she said. 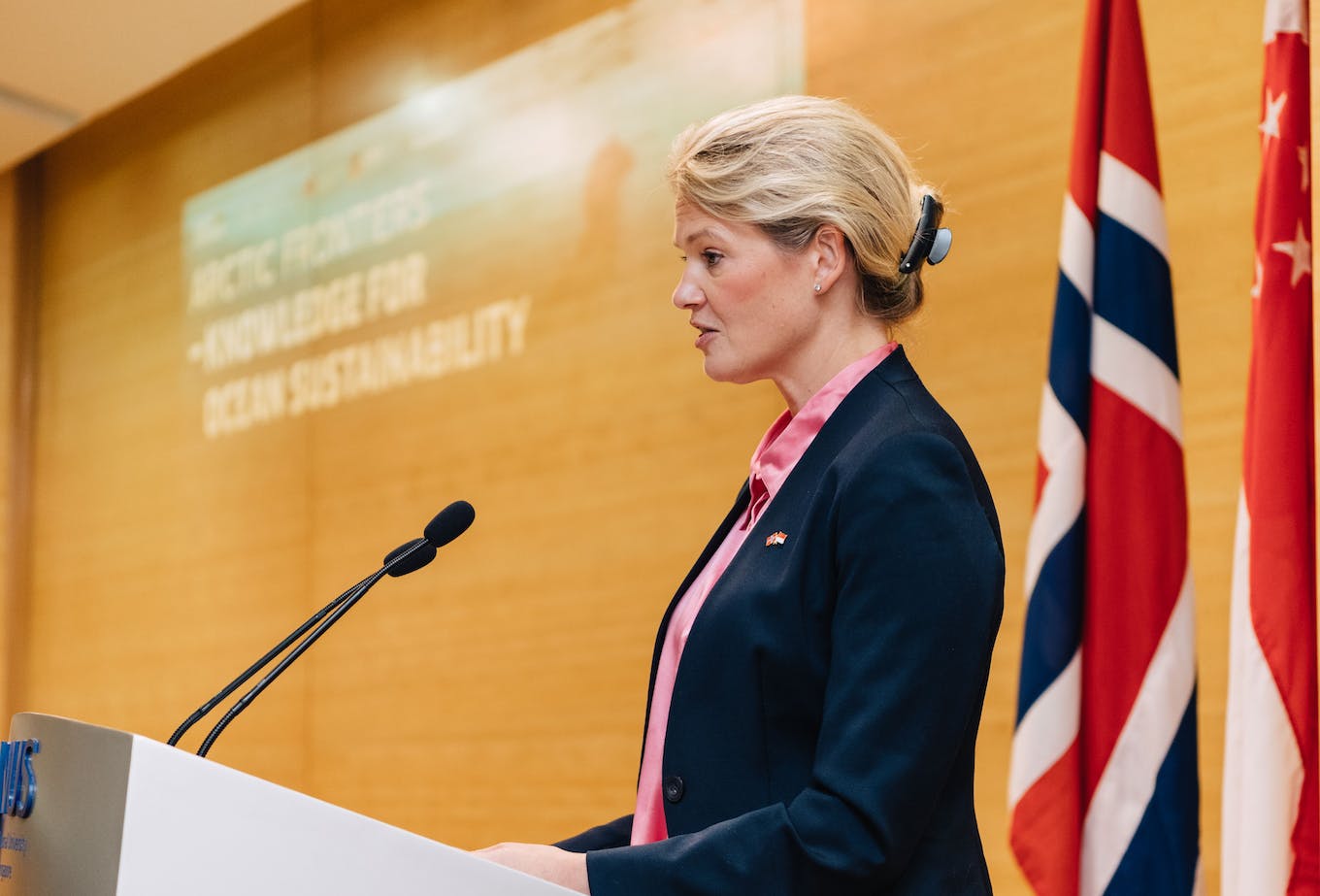 Norway has a long tradition of making use of the ocean in a prudent and sustainable manner, said Liv Lønnum, its deputy minister for petroleum and energy. Image: The Royal Norwegian Embassy in Singapore

Norway is a key exporter of oil and its Government Pension Fund Global, also known as its oil fund, has over US$1 trillion in assets and is the world’s largest sovereign wealth fund.

But there are dilemmas to navigate as the country continues oil and gas exploration amid a climate crisis.

Living with a dilemma

Scientists currently know less about the oceans than outer space.

And although Norway generates about half the amount of carbon-dioxide than the global average per barrel of oil it produces, the burning of this oil for energy could generate emissions elsewhere that vastly exceed the Nordic nation’s own emissions. Environmental groups have said continued exploration will threaten Paris Agreement targets that aim to avert the worst effects of climate change.

For Professor Anne Husebekk, president of University of Tromsø – The Arctic University of Norway, the dilemma means having students tell her that the university, which has research programmes in oil and gas, should not be engaged in the industry.

“It’s extremely difficult, because the Norwegian politicians have said … that we are still finding new resources to exploit in Norway, and for the next 40 to 50 years, we’ll have an industry that, by itself, doesn’t emit very much, but the resulting oil and gas is (causing) emissions in other parts of the world,” said Husebekk at the seminar.

“How can Norway, on the one hand, be at the forefront (of tackling) climate change… and on the other, be a big exporter and very much reliant on an economy that’s oil and gas-based? That’s the sort of dilemma we have to live with,” she said.

Husebekk told Eco-Business that she believes Norway should set an end-date to its oil and gas exploitation, perhaps in 15 years’ time, to allow people working in the industry to switch to new jobs. It should continue providing energy to the rest of the world, but from renewable sources, she said.

Such a change will take massive effort and entail unpopular decisions, she said. Much of Norwegian welfare is founded on oil money and it will be very hard for any politician to raise the prospect of lower pensions and get re-elected, for instance, she said.

How can Norway, on the one hand, be at the forefront (of tackling) climate change… and on the other be a big exporter and very much reliant on an economy that’s oil and gas-based?

Professor Anne Husebekk and Professor Kim Holmen (second from left) with other experts at the Arctic Frontiers - Knowledge for Ocean Sustainability seminar. Image: The Royal Norwegian Embassy in Singapore

In the meantime, melting ice has increased access to the Arctic’s trove of resources and this has meant opportunities for researchers and companies halfway around the world—although Southeast Asia, including Singapore, will be hardest hit by rising sea levels caused by melting and collapsing ice sheets if carbon emissions remain at business-as-usual levels and temperatures continue to rise.

Opportunities halfway around the world

Researchers at the Keppel-NUS Corporate Laboratory in Singapore work on Arctic-related projects such as the interaction between ice and offshore structures.

Singapore firm Keppel Offshore and Marine is a leader in the design and construction of offshore rigs and vessels that can sail through ice-covered seas. It is currently developing next-generation ice-breakers capable of cutting through ice that is three metres thick, said NUS Adjunct Professor Aziz Merchant, who is executive director of Keppel Marine and Deepwater Technology.

As Arctic waters are increasingly used for shipping, tourism, research and resource extraction, Merchant and other experts highlighted the risk of accidents and called for stronger search and rescue capabilities and infrastructure to ensure safety.

Society must avoid pointing fingers at one another and collaborate on the Arctic, said Holmén.

“That we are talking about the impacts of business or the impacts of various developments before they begin, is a much better (approach) than humankind has (taken) before,” he said.