Green groups in Asia rally for Japan to quit coal

As the host of the G20 summit to be held in Osaka this week, Japan is under fire to show 'climate leadership' by shaking itself free from coal. Its banks are among the world’s biggest financiers of the fossil fuel.

Climate justice organisations around Asia have called on Japan to stop funding coal, as the leaders of the world’s largest economies head to the East Asian country for the Group of 20 (G20) summit.

Japan is hosting the G20 summit for the first time, and governments are convening in Osaka to take collective action against global economic uncertainties.

Activists have accused Japanese banks of being one of the largest financiers of foreign coal development in the world, despite Prime Minister Shinzo Abe stating in January that climate action would be at the top of the summit’s agenda. 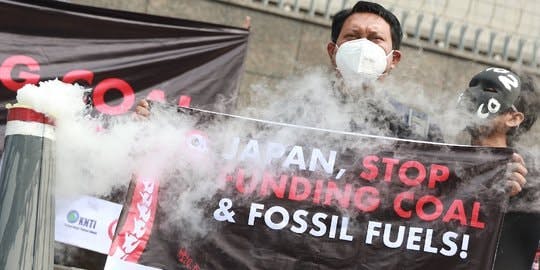 A protester in front of the Japanese Embassy in Jakarta, Indonesia. Image: JATAM

“People are watching how Japan will use its [G20] presidency to advance climate talks. Time is of the essence if we are to keep global temperature rise below 1.5 degrees Celsius,” said Chuck Baclagon, campaigner for climate advocacy organisation 350.org, one of the 50 civil society groups that make up the Asian People’s Movement on Debt and Development (APMDD), that is leading the protests around Asia.

“I hope they do not squander the opportunity to lead the summit to necessary action to realise the Paris Agreement.”

In the run-up to the summit, APMDD protesters in the Philippines and Indonesia trooped to the local offices of three of the biggest Japanese lenders urging them to divest from coal. The rallies were held simultaneously with the three firms holding their annual shareholders meetings at their Tokyo headquarters.

People are watching how Japan will use its presidency to advance climate talks. Time is of the essence if we are to keep global temperature rise below 1.5 degrees Celsius.

Mizuho Financial Group, one of Japan’s biggest financial institutions, funded the 2,000-megawatt Batang Project in Java, Indonesia in 2017, which is touted to be Southeast Asia’s largest coal-fired power plant. The bank also financed two coal power plants in the Philippines, one of which is facing complaints of human rights violations, as residents are evicted from their land to accommodate the plant. 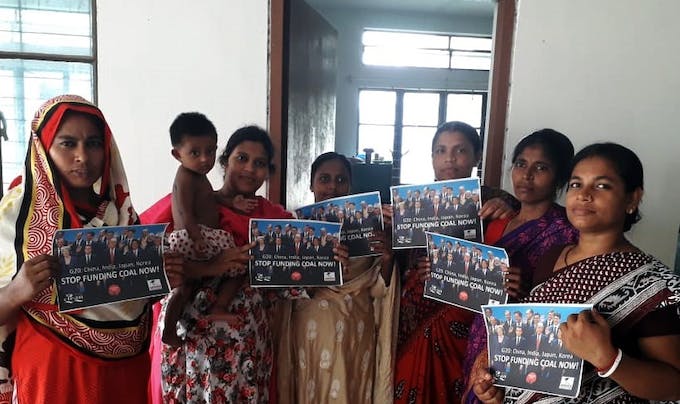 Women activists hold up photos of G20 leaders as part of their symbolic action of protest at the National Press Club in Dhaka. They would have wanted to hold a rally in front of the Japanese Embassy, but the ministry is a highly restricted area in Bangladesh. Image: Coastal Livelihood and Environmental Action Network (CLEAN)

Trading conglomerate Marubeni Corporation supported the construction of two coal plants in the Philippines last year, which drew opposition from residents living near the facility.

Sumitomo Mitsui Banking Corporation is the main sponsor of the controversial Van Phong power plant in Vietnam, which has suffered years of delay due to mounting pressure from environmentalists. They say the facility will emit air pollution up to nine times higher than those of the average coal power stations in Japan.

The US$1.8 billion coal project is co-financed by Mizuho, MUFG Bank, and Japanese Bank For International Cooperation (JBIC), which in April agreed to lend US$1.199 million to finance the project.

Protesters also rallied in front of the Japanese Embassy in the Philippines this week, with similar actions taking place outside Japanese embassies in India, Bangladesh, Indonesia, and Pakistan.

In a statement, APMDD said protesters in India mobilised 20,000 of its members across 18 states, covering 75 cities, calling for G20 countries to cease public subsidies of fossil fuels.

In Pakistan, 400 activists marched around the coastal village of Ibrahim Hyderi in Karachi where a huge coal project is being constructed, ahead of the summit. 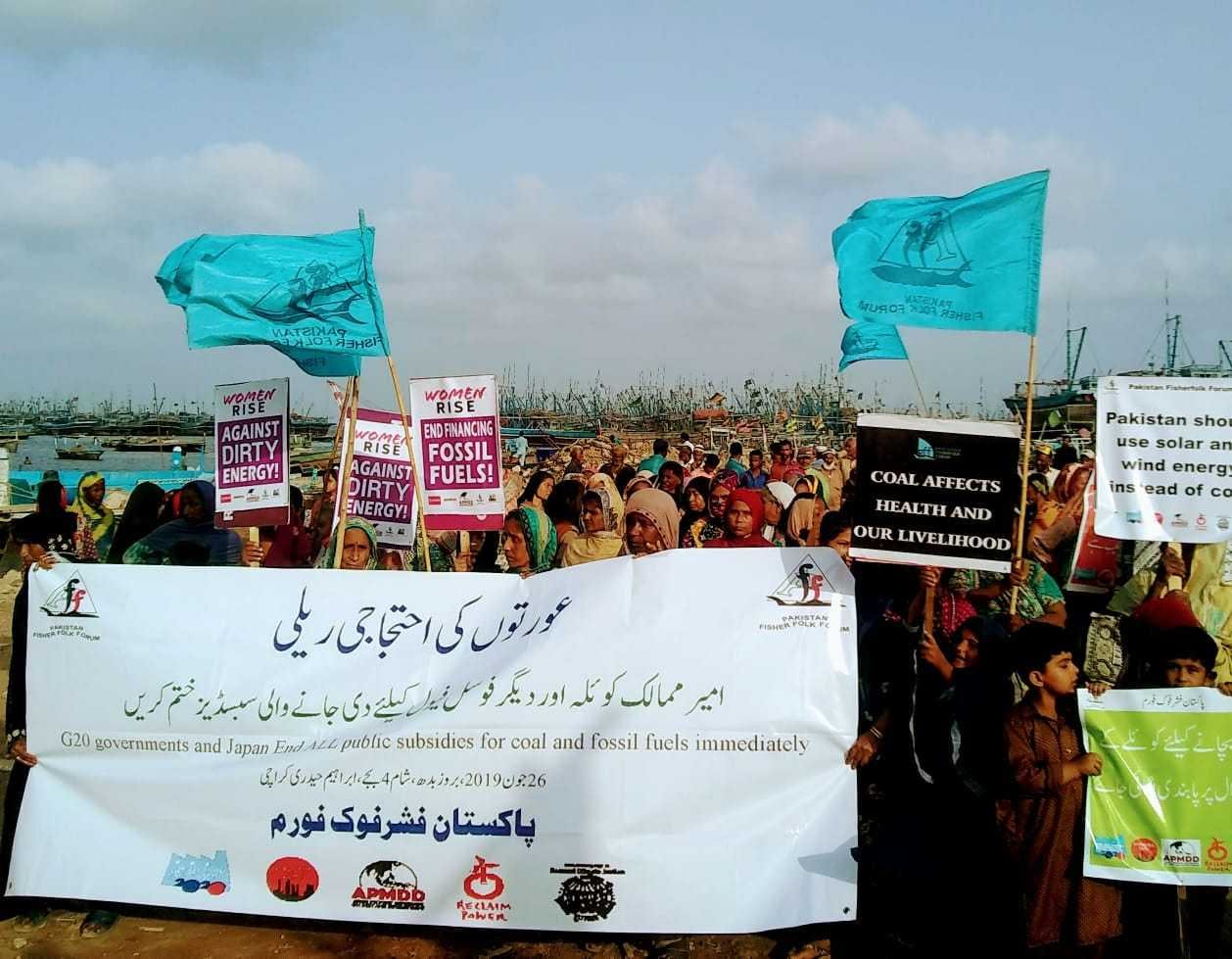 Other G20 governments should quit coal, too

Besides Japan, activists urged the other 19 G20 members to retreat from coal.

The G20 countries have provided at least US$63.9 billion of support for coal from 2016 to 2017, according to a report released on Tuesday by London-based think tank Overseas Development Institute (ODI).

The report found that the territories that make up the world’s major economic bloc have ramped up investments in coal-fired plants overseas, often in developing countries, from US$17 billion to US$47 billion annually, over the same period. 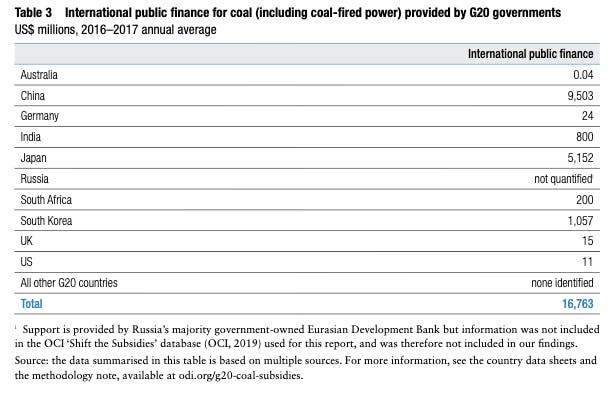 ODI’s 52-page study also showed that India’s banks provide about US$10.6 billion per year in public finance for coal mining and coal-fired power domestically, while Canada, China and Germany support the rehabilitation of mining sites all over the world.

“Despite their expression of commitment to solving climate change, G20 countries continue to provide public subsidies to perpetuate and even expand the use of coal and fossil fuels,” said Lidy Nacpil, coordinator of APMDD.

“We are facing a planetary emergency, but the world’s most powerful governments are not pledging enough and doing even less to fight global warming. Their fossil-fueled economies are leading us to extinction.”