Data tracking by the energy watchdog shows that actual emissions of the supercharged greenhouse gas are 70 per cent higher than official figures.

Governments have been underreporting their methane emissions to a “dramatic” extent, according to a report from the International Energy Agency (IEA), published on Wednesday.

Using satellites and new technology that have now “rendered the gas newly visible to cameras”, the energy watchdog found methane emissions were about 70 per cent higher than what has been reported by national inventories, showing the need for better accountability from governments and more efforts to plug leaks.

Many countries’ official greenhouse gas emissions figures have not been updated for years, and even those that have are not accurate enough to provide a clear picture of emissions, noted IEA in its Global Methane Tracker, a report released annually.

Latest data shows that the global energy sector was responsible for around 135 million tonnes (Mt) of methane emitted into the atmosphere last year – a year-on-year increase of just under 5 per cent, largely due to higher fossil fuel demand and production as economies recovered from the shock of the Covid-19 pandemic.

“The increase slightly lagged the rise in overall energy use, indicating that some efforts to limit emissions may already be paying off,” said IEA. 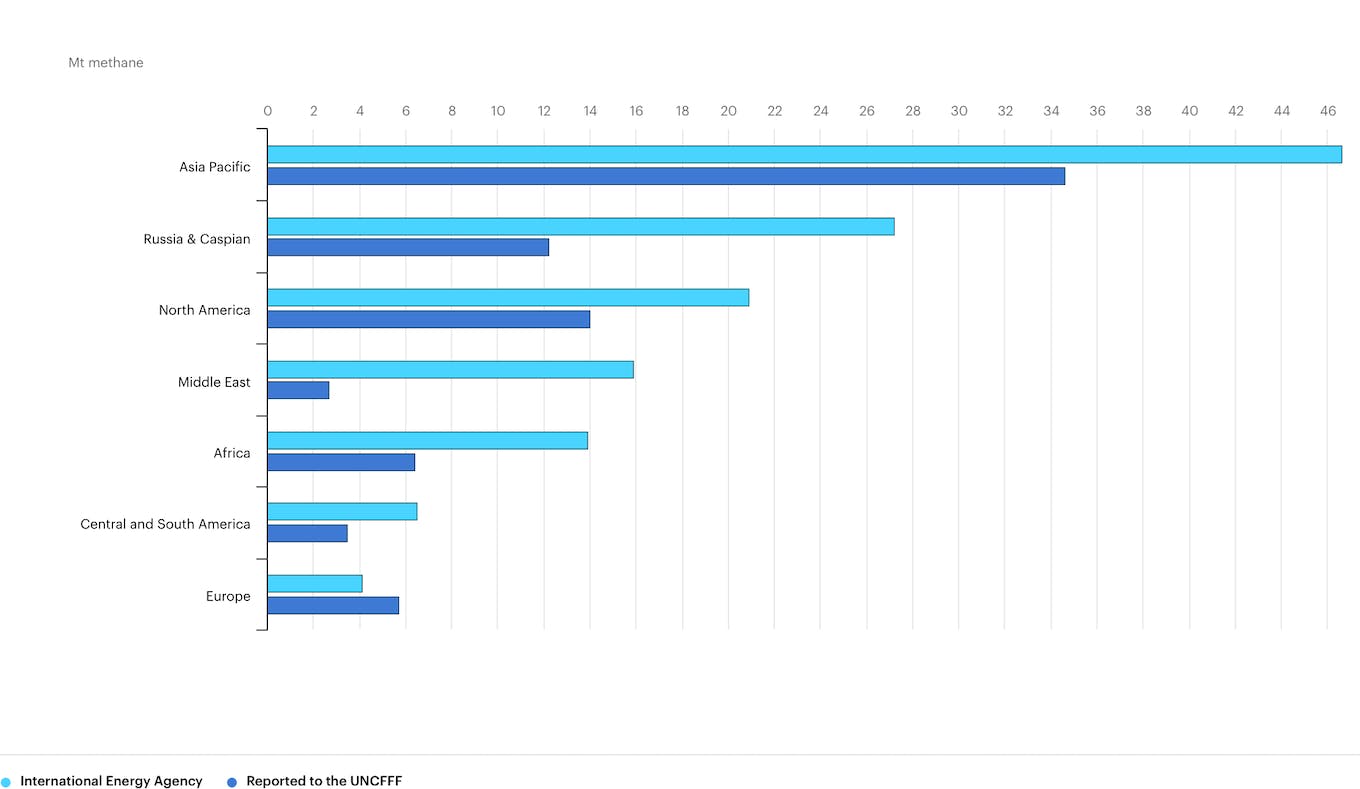 Global energy-related methane emissions by region reported to the United Nations Framework Convention on Climate Change (UNFCCC) were much lower than estimates from the International Energy Agency. [Click to enlarge] Image: IEA

Methane, a powerful greenhouse gas with more than 80 times the initial warming impact of carbon dioxide (CO2), comes from natural sources, such as swamps and termites, as well as human activity that includes oil and gas infrastructure, cow burps, rice production and landfills. It also has a short residence time in the atmosphere.

IEA executive director Fatih Birol said that governments have few excuses for not taking action to curb methane emissions, given that nearly all of these emissions from oil and gas operations worldwide could be avoided “at no net cost”.

“The IEA has been a longstanding champion of stronger action to cut methane emissions,” he said. “A vital part of those efforts is transparency on the size and location of the emissions, which is why the massive underreporting revealed by our Global Methane Tracker is so alarming.”

The report found agriculture to be the largest source of methane emissions attributable to human activity. The energy sector, responsible for around 40 per cent of methane emissions, comes in second. An estimated 42 Mt of energy-related emissions are from coal operations, 41 Mt from oil, and 39 Mt are from extracting, processing and transporting natural gas.

Country-by-country estimates, included for the first time in the Global Methane Tracker report, show that China is the largest source of global energy-related methane emissions (28 Mt), followed by Russia (18 Mt) and the United States (17 Mt).

“Coal-related methane emissions from China, the world’s largest coal producer and emitter of coal mine methane, are equivalent to total CO2 emissions from international shipping”, said the report.

China and Russia are both not part of the Global Methane Pledge. The initiative, led by the European Union and the US, was launched in November by more than 110 countries at the COP26 climate summit in Glasgow. Its participants agreed to reduce methane emissions from human activities by 30 per cent before 2030.

The report noted that the best performing countries with the lowest emissions intensities “are more than 100 times better than the worst”. These include Norway, the Netherlands and countries in the Middle East such as Saudi Arabia and the United Arab Emirates. “If all producing countries were to match Norway’s emissions intensity, global methane emissions from oil and gas operations would fall by more than 90 per cent,” said IEA.

Increased attention to methane abatement in recent years, including new measurement campaigns and technologies, may be having some effect, according to the report. The limited availability of measured data for most countries, however, means that the agency cannot state with confidence where and how abatement efforts might actually be reducing emissions.

Birol said that the methane pledge at the COP26 conference must become a “landmark moment” in the world’s efforts to drive down emissions. The IEA suggested for oil and gas importers to use diplomatic pressure, incentives and trade measures to push for emissions reductions from their trading partners, which might be large methane emitters.