Growing awareness of the meat industry's environmental footprint is slowing the growth of demand for meat, but global appetite is proving insatiable. But solutions exist to lessen the impact of livestock production, said food experts at a recent forum in Tokyo.

With the world’s population expected to reach 9.6 billion by 2050 and continued growth in demand for meat, the livestock sector is facing renewed pressure to provide the nutrition to feed that many mouths—sustainably.

That needs to be achieved, however, in a way that does not impose additional strains on our already over-stressed planet, delegates attending the recent DSM Animal Nutrition Sustainability Forum 2.0 in Tokyo last month heard.

And despite what at first glance appears to be an equation that will be virtually impossible to solve, there are solutions, said experts speaking at the symposium. One of the key enhancements lies in utilising science to increase output efficiency within the livestock sector at the same time as reducing the industry’s footprint on our environment.

David Nickell, vice president for sustainability, DSM, said the global population would have doubled from 1989 figures in 30 years’ time.

“Those numbers are alarming, but not quite as alarming as the number of calories that we will need to feed that population, which will be 70 per cent more but within the planet’s boundaries,” he observed.

“We need to produce more at the same time as reducing our environmental footprint.”

Consumer concerns over the role of livestock production in driving climate change is growing the market for plant-based proteins and synthetic meat, found a McKinsey study. While this is one trend that is likely to slow the rise in demand for animal protein in the next decade, the study stills foresees an overall increase in appetite for meat and meat products.

In 1939, the average Japanese person consumed 1 ounce or about 28 grams of meat a day, which works out to about 10kg per person per year.  The modern Japanese citizen ate close to 40kg per capita of chicken, beef, pork and mutton in 2018, while American counterparts wolfed down 100kg of red meat and poulty.

The livestock and fish sector account for 14.5 per cent of the world’s greenhouse gas emissions, said Nickell, with methane emissions from cattle are of particular concern for its global warming potential.

While every nation faces unique challenges, Japan’s situation is arguably more acute because of its reliance on imported food and imported feed for the livestock required to sustain its 127 million people, said Kazuhiko Shimada, research councillor with the Ministry of Agriculture, Forestry and Fisheries, who spoke at the forum in Tokyo.

In 2017, Japan’s domestic poultry production came to 1,570 kilotonnes, but that figure is projected to climb to 1,628 kilotonnes in 2027. That degree of growth places pressure on the resources of the mountainous nation with a limited land area suitable for farming for feed production.

Shimada said Japan imports around 12 million tons of feed for livestock each year, making it vulnerable to an increase in feed price as countries with rapidly growing populations push up demand for meat and, consequently, feed. This may have serious consequences for Japan’s food security.

Similarly, Japan needs to take steps within the agriculture sector to protect the broader global environment, Shimada said, emphasising that Japan’s greenhouse gas emissions account for 4 per cent of the global total.

“Right now, our number one priority is to reduce nitrogen emissions in the agriculture sector, and we are cutting methane by putting additives in cattle feed,” he said.

Solutions to do so already exist in the market, DSM’s Nickell noted. This includes the firm’s Ronozyme ProAct feed ingredient that cuts nitrogen waste from birds and Project Clean Cow, an additive that can be incorporated into feed to cut livestock methane emissions by as much as 30 per cent. 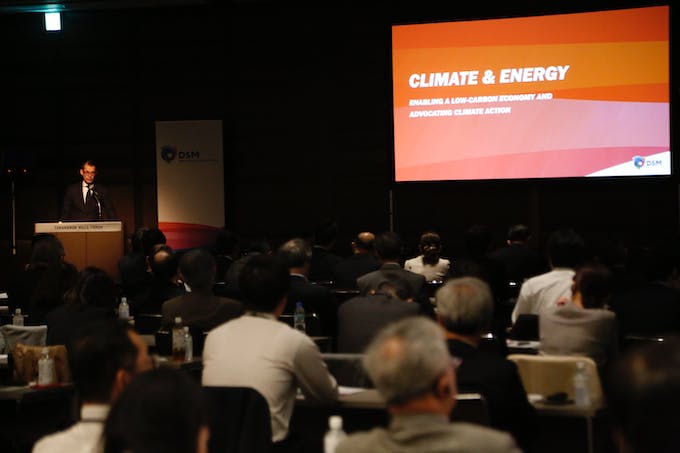 Increasing the country’s food self-sufficiency rate from 26 per cent to 40 per cent is another key strategy to protect Japan’s food future. “Because we have to import a lot of our food from overseas, we believe it is important to increase the amount that we can produce domestically at the same time as ensuring sustainability and reducing food waste, ,” Shimada added.

Companies in the business of feed manufacturing such as Marubeni Nisshin Feed Co are incorporating new innovations to minimise waste and reduce the carbon footprint of their operations.

Yuji Tsuchihashi, head of the quality assurance department, said:“In Japan’s feed industry, most of the raw materials have to be imported from overseas, such as corn from the US, but we are now seeing an improvement in the production of corn here in Japan.”

“There has not been an increase in terms of acres under crops, but the yield has improved thanks to technological innovations,” he said.

And not only have yields improved, he said, but producing domestically means the crop is closer to its final destination, meaning that far less energy is required to deliver it to the end user.

Technological innovations have taken hold elsewhere in the cycle, he added.  A couple of years ago it required 2.3kg of fish to produce 1kg of edible meat; now it only takes 1.7kg to produce 1kg of meat that is ready to put on a supermarket shelf.

Japan’s food manufacturers are also keen to be involved in the sustainability revolution, with Kewpie Corp, famed for its mayonnaise and the destination for fully one-tenth of all the eggs produced in Japan, using calcium-rich eggshells in feed supplements.

“This is the sort of effective use of resources that we are working towards because it meshes with our philosophy of realising a sustainable society and the parallel sustainable growth of our company,” said Hiroyuki Ishibashi, head of the company’s corporate social responsibility division.

More from Sustainable solutions and the SDGs