Diving ban not enough to save Pakistan’s coral paradise

In the name of conservation, diving has been heavily restricted at Churna Island in Pakistan. But tourists are only one of many sources of pollution.

Nestled among the coral formations that surround its rocky shore, Churna Island lies off the Pakistan coast at the border of Sindh and Balochistan provinces. Its coastline and reefs provide a vital habitat and breeding ground for Pakistan’s marine biodiversity, including beautiful species such as the lionfish, which are a major draw for scuba divers.

Pervez Sadiq, an expert at the Sindh Environmental Protection Agency, started diving in the 1970s. Churna was one of the first spots he visited back when scuba diving in Pakistan was limited to just a handful of divers. That has changed.

Noor Mohammed, a local fisherman, observed that in peak season around 2013-14, the island would have over 500 visitors at a time, with activities and prices catering for visitors of all interests and economic backgrounds.

The navy steps in

This came to a halt in 2018, when the Pakistan Navy imposed restrictions on tours and activities near the island. Tour companies now need a No Objection Certificate (NOC) to carry out activities.

Provided by the navy, an NOC is meant to allow companies that follow guidelines to operate in the area, but a lack of clear guidelines coupled with substantial red tape means only those with connections, or who have the time to chase incessantly, are able to obtain the certificate.

Farhan Farooq, founder of Divers Reef Karachi, one of the few companies still operating in the area after the new rules were applied, said he is still unsure why the restrictions were imposed.

One of the reasons for the ban quoted by navy officials was pollution in the area. Scuba diving can be a significant source of litter and other pollution, as well as disturbance of sensitive coral ecosystems.

Large commercial tours may result in trash like plastic and food packaging being thrown into the water, while noise and fuel pollution from poorly maintained boats can harm marine life. 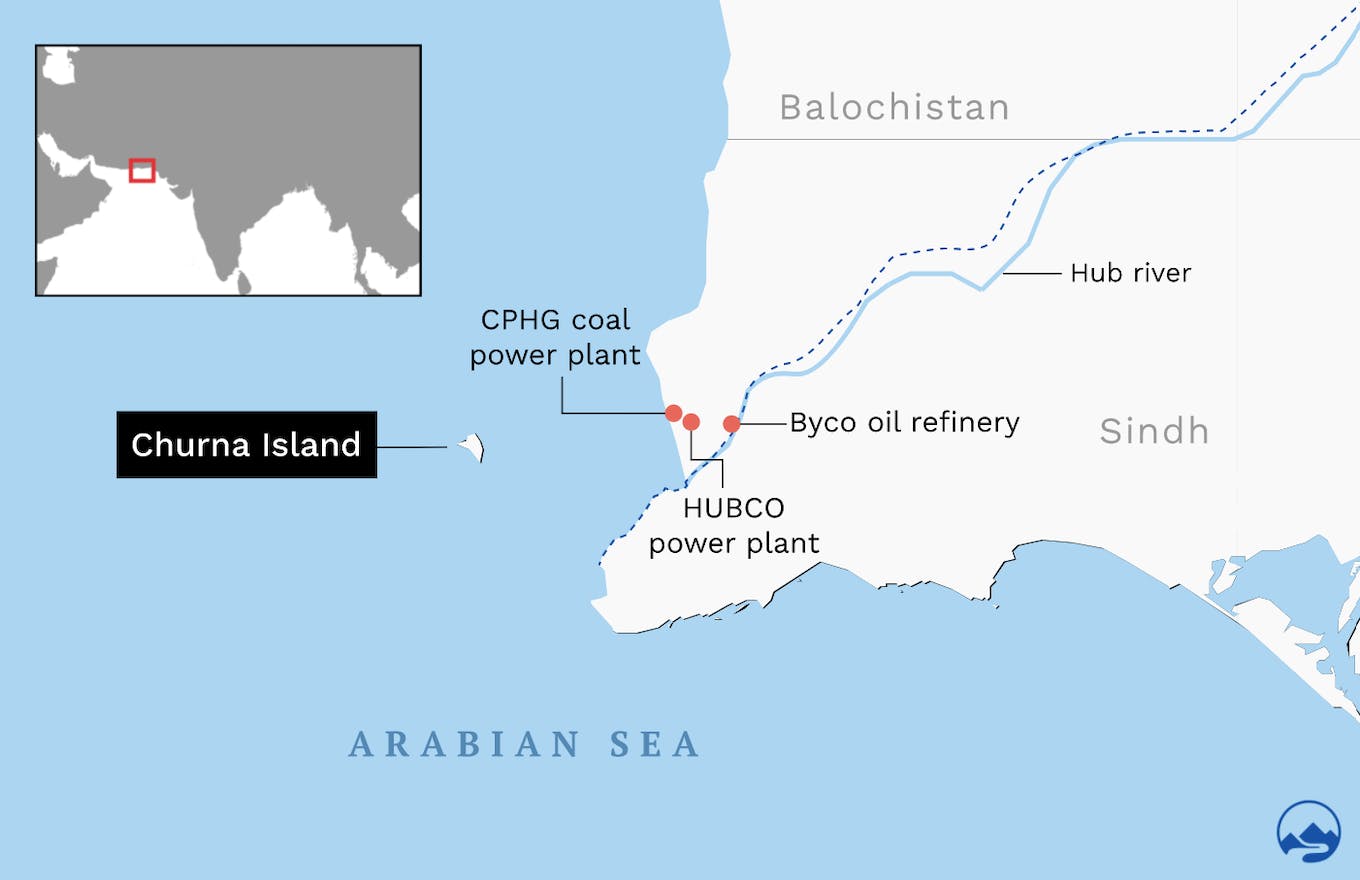 Churna Island is located in the Arabian Sea, around 8 km off the coast of Pakistan. Image: The Third Pole

Studies that looked at the impact of diving in the Philippines found that it was harder to correct and manage behaviour from divers in large groups and that, amidst other factors, coral disease was higher in areas frequented by divers.

Yet it is the scuba diving community that has been among the most active in cleaning the area around Churna. Diving instructors such as Yousuf Ali and Rosheen Khan, who head the Karachi Scuba Diving Centre, have coordinated cleaning efforts for a decade.

In 2010, when the federal government first observed International Reef Cleaning Day in Pakistan, scuba divers extracted ghost nets, old anchors, plastic debris, tobacco products and even a knife that had been stuck into coral.

Nevertheless, Sadiq from the Sindh Environmental Protection Agency estimates that fish numbers are now around 10% of what they used to be three decades ago, while pollution has increased. If the navy is serious about pollution, it may need to look beyond tourists.

No shortage of sinners

Journalist and filmmaker Madeeha Syed has been involved in ocean-cleaning drives as recently as April 2021. Syed says that while these may have ensured small ghost nets that were found around Churna have been removed, the main threat comes from pollutants being pumped into the water from power plants nearby.

“When we were allowed to set off from Manjhar for Churna, at times I would notice how warm the water was when we would step into the sea from the coast because of the pollutants being dumped into the water,” Syed said. “This year there’s been a worrying increase in large jellyfish as well – indicative of both climate change and an absence of predators which is linked to a reduction in biodiversity.”

Power plants near the island include the CPHG coal power plant, Byco oil plant and Hubco coal power plant. While the Byco and Hubco plants are over 20 years old, the CPHG plant – a joint venture of Hubco and a Chinese company – was only approved in 2016, and built a mere 500 km from Churna because the island provides protection from the wind and waves.

Because of continuous traffic of people and vehicles and the impact of industries like Hubo and Byco plants, many precious mobile species have migrated from the island, while sessile [immobile] species like corals are under severe threat of depleting and bleached.

“The company is installing 60-million-dollars-worth of equipment only to keep the environment safe from pollutants,” Hubco’s chief executive Khalid Mansoor told Dawn newspaper in 2017. But residents of the surrounding areas have complained of increasing skin and lung diseases, while divers have claimed that the water temperature has increased significantly in the past five years. Coral bleaching – often caused by increased water temperatures – is now being observed near Churna.

The Third Pole contacted the companies that run the plants for comment by telephone and email prior to publication of this article. In a statement, Byco said, “Byco is in full compliance with all of the Environment Health and Safety standards and protocols of the Environmental Protection Agencies of both Sindh and Balochistan.

Byco duly adheres to Pakistan’s National Environment Quality Standards (NEQS). The NEQS are applicable on all of Byco’s emissions, waste discharge, and effluents. Its operations are duly monitored in accordance with the laws related to both the national and provincial environmental protection agencies.”

Nuzhat Asfar, a professor at the Centre of Excellence in Marine Biology in Karachi, said that the damage in the area is a culmination of multiple factors. These include improper solid waste disposal, untreated sewage, the use of destructive fishing nets, overfishing and the rise in sea temperature due to climate change.

Moazzam Khan, technical adviser for marine fisheries at WWF, believes industrial activities in the area such as the power plants and oil refineries are reasons for rising sea temperatures and subsequent coral damage.

Muhammad Haseeb-ur-Rehman, a marine and fisheries biologist, said that targeting only one issue when there are multiple threats will not bring about the desired change. “Because of continuous traffic of people and vehicles and the impact of industries like Hubo and Byco plants, many precious mobile species have migrated from the island, while sessile [immobile] species like corals are under severe threat of depleting and bleached,” he said.

But Haseeb-ur-Rehman was sceptical of diving tour operators passing off their business as ‘eco-tourism’, given pollution from boats can damage coral. “Cleaning drives and ecotourism projects can really help if they ‘really’ help. This island is rocky and is not like a beach attached to a massive piece of land where merely collecting waste and cleaning campaigns involving several people could prove helpful,” he said.

So far, conservation efforts have remained limited to activists with little government support. There still remains some confusion as to whether Churna falls into the ambit of Balochistan Environmental Protection Agency (BEPA) or its provincial counterpart in Sindh, the Sindh Environmental Protection Agency (SEPA). Sadiq, who works with SEPA in an expert capacity, says that there is little understanding in the government on what to do next.

Instead, it is the navy making the calls on the area’s protection. “Currently the restrictions don’t make sense. The navy has no business curtailing access to the whole coastline,” Sadiq says, referring to the current navy ban on Churna Island tours without an NOC (No Objection Certificate). “Instead, the focus should be creating strategic proposals to incentivise locals and create sustainable fishing practices, impose bans on illegal fishing net sizes and fund awareness programmes around a protected area.”

Other divers have complained that despite attempts at reaching government bodies to put a plan of action in place, those responsible often seem ill-informed on the issues facing Churna Island.

One way forward may be to create a Marine Protected Area (MPA). To date, Pakistan has designated only one MPA, Astola Island, although the International Union for Conservation of Nature (IUCN) has proposed Churna Island as one of several areas that should receive this protection.

MPA status would bring restrictions on fishing within a certain radius of the island, providing a safe breeding ground for fish, and a limit on commercial activities to reduce pollution and damage. Official protected status could also raise public awareness of the island’s importance for biodiversity, making it more difficult for companies to ignore protections.

The government seems to be listening. After years of recommendations by experts such as Sadiq, academics and environmentalists, some plans to protect Churna Island are finally underway, which will include monitoring tourism and diving activities, creating a no-fishing zone and controlling pollutants.

One consequence of such a move could be to make life even harder for fishing communities in the area. Noor Mohammad, a boat driver and fisher from Mubarak village, which is the closest village on the coast to Churna, said that his fishing yield has decreased in recent years.

A ban on fishing in the area between May and August was in place between 2013 and 2016, initially imposed by the Karachi Fisheries Harbour Authority to protect fish during the breeding season to maintain populations. The ban proved ineffective due to a lack of awareness among local communities and little logistical control over the area.

Mohammad also said that engaging locals in conservation is difficult when rules restrict movement in the area, because they rely on their daily fishing for sustenance. “The government does little to provide support to local fishing communities and their reliance on themselves means they’re unlikely to support restrictions in the name of conservation unless they understand it,” he said.

Protecting Churna will require engaging not just scuba divers, tourists and experts, but local communities and big business too. Bans that are routinely flouted will do little to save the beauty of Churna.

Eco-Business published this story with permission from The Third Pole.