[Magazine exclusive] Car ownership in Asia is growing rapidly, but so too is the number of commuters who are turning to bicycles as a convenient, quick and clean way to get around the city.

Asia’s rising middle class may be driving the increase in car ownership, leading to traffic congestion and air pollution in the region’s cities, but this status symbol may be slowly giving way to an old love - cycling.

More Asians are jumping on a bicycle for fresh air and to lead a more environmentally-friendly and active lifestyle in recent years as staying sedentary inside a car for hours on end could take a toll on one’s health, and be hard on the wallet because of the high cost of fuel and maintenance.

In a new study of vehicle ownership in 44 countries by Pew Research Center, households around the world own bicycles more than motorcycles and cars. Japan and Thailand rank second and third in terms of bike ownership globally, although these two countries also rank high in car ownership, with 81 per cent and 51 per cent of their populations owning at least one vehicle.

World bicycle production in the 1970s declined steeply as car prices fell and incomes rose, allowing more people to acquire them, according to the Earth Policy Institute (EPI). But in the early 80s, the trend reversed, and global bike production climbed to 108 million by 1988. Between 1989 to 2001, production slowed down again.

Since then, the figure has been rising steadily, to about 130 million units in 2007.

The institute points out that even in China, which was once a haven for bicycles, the bike fleet declined by 35 per cent between 1995 and 2005. The Chinese government turned its attention back to the bike in 2006, after pollution caused by the ever-growing number of cars began to blanket major cities. In Beijing, the bike further received a boost after the capital city implemented road space rationing during the 2008 Olympic Games, forcing Beijingers to use the two wheels, and in 2012 introduced policies to limit car ownership.

Despite growing car ownership in China, only 17 per cent of households have cars, while 65 per cent have a bicycle, according to the Pew survey. China is also leading the world in the number of bike-sharing schemes, with about 170 bike-sharing systems operating in the country.

Meanwhile, Taiwan, one of the world’s biggest manufacturers of bicycles, is bidding to become Asia’s cycling hub, and is proving that bicycles could be a major sustainability driver. It prides itself as the only country in Asia which has strategically established a national network of bike lanes, stretching 4,017 kilometres in 2014, and attracting cycling enthusiasts worldwide to explore the island nation’s nature hotspots.

Taipei’s bike-sharing programme is one of the most successful in the world, overtaking global cities like New York or Barcelona on usage rate, which averages 10-12 trips a day for each of its 5,350 bicycles at 165 stations.

In Southeast Asia, Singapore, which is known for its efficient public transport system but has no established culture of cycling as a transport option, is one of the countries now keen to change that. It is spending S$43 million on bike lanes and cycling facilities as part of a national cycling plan.

Meanwhile, in Thailand, where 74 per cent of residents own a bike based on the Pew study, the government promised last January to increase bike lanes by 10 kilometres in capital Bangkok from the current 232 kilometres to include other areas that do not have cycling routes.

In Japan, a group of lawmakers is pushing for more people to use bicycles as a mode of transport, calling for the establishment of a bicycle-use promotion centreand a government minister that will champion bicycle use to reduce dependence on motor vehicles. Seventy-eight of households in Japan are bicycle owners, the second highest in the world after Germany, but the number of car owners are also high in the country. In fact, it’s the highest in Asia.

The idea that buses, trains, bikes and boats are only being used by poor people as modes of transport is a major stumbling block to appreciating them as a form of sustainable transport, says James Leather, a principal transport specialist with Asian Development Bank’s (ADB) Southeast Asia Department. Private cars, on the other hand, are seen to give more comfort and an indicator of wealth.

For a long time, the common wisdom has been the notion that cars are ‘great’ or that the symbol of an industrialised country is that it has new highways,” he comments on an ADB blog published in February.

In the Philippines, only six per cent of Filipinos own cars while 24 per cent have bicycles, according to the Pew survey. However, Manila-based citizens’ group Share the Road Movement claims motor vehicles, especially private cars, occupy the roads more than pedestrians and cyclists. The group is pushing a more equitable Road Sharing Principle by petitioning the government to implement already established laws that protects citizens’ health and make the air less polluted.

This can be achieved by assigning half of the roads in the country for bike lanes and covered sidewalks and the other half for other modes of transport, the group says.

The country does not have a national cycling plan, and in response to the group’s call, the national government through the Department of Environment and Natural Resources issued a ruling in November, promising bicycle and people-friendly infrastructure throughout the country by requiring all new road construction projects to include bike lanes and sidewalks before they can be given any environmental compliance approval for their projects.

Ku Manahan, a resident of Quezon City in Metro Manila and a photographer by profession, has been cycling about 42 kilometres daily to and from work for three years now. He says bike lanes would be highly beneficial for cyclists like him, as he has encountered problems with motorists, who often disregard cyclists, putting their lives in danger.

As for companies, bicycle parking and a shower and locker room would help encourage employees to cycle to work, Manahan explains. 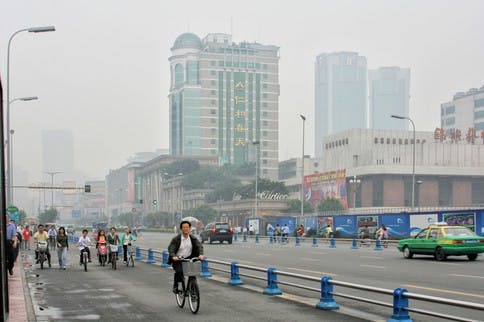 Bike lanes in China. Bicycles were once a cultural icon in China, but with economic development, cars have become a major source of pollution in cities like Beijing. Image: Nataliya Hora/ Shutterstock

With this renewed interest in cycling, transportation experts are looking at this centuries-old pedal-powered mode of transport - which had once been the ideal “zero-emissions” vehicle for millions of people - on how it could provide access to areas not linked to large public transport networks.

The bank plans to finance bike-sharing projects in three Southeast Asian cities: Davao in Philippines, Vientiane in Laos and a yet to be determined city in Indonesia.

As part of the study, ADB set up a trial bike-sharing system in 2013 at its headquarters at Pasig City, Phillipines, along with two other stations - one at Pasig City’s government office and the other at the University of Sto Tomas in Manila to test its acceptability.

“The demonstration project in Manila with Pasig city is successful and growing into a larger system. ADB has earmarked some funds to support the expansion as has the government. A team including Clean Air Asia is currently working on the expansion which will be implemented this year,” Bradley Schroeder, ADB transport consultant, tells Eco-Business.

In Vientiane, a preliminary design plan for a bike sharing system was included last November in an approved sustainable transport loan to the Lao PDR government. The proposed phase 1 coverage area was chosen to complement the city’s Bus Rapid Transit, says Institute for Transportation and Development Policy (ITDP)-China, the transport planner for the project.

The system will serve short trips normally done by car or motorbike such as during lunch breaks, when people needed to cover short distances to get to restaurants. “A high-tech ‘third generation’ bike sharing system is recommended, and revenue streams can include subscription fees, user fees, advertising, sponsorship and branding rights, and government subsidy.”

Schroeder notes that if the system is specifically designed to address the needs of the poor, it will be able to encourage people to use bikes as a mode of transport, he tells audiences at the recently held Asian Cycling Forum in Taiwan. “When designing a bicycle sharing system, it’s imperative to design a system for people to want to use, not a system people have to use.”

He suggests that a very good system will attract many users and pay for it. “With an efficient system, the government can economically include the poor into the system through voucher systems attached to other subsidies or services they may receive, such as ‘food stamps’ or ‘affordable housing’ programmes,” he adds.

YouBike, Taiwan’s most popular bike sharing scheme, which is being implemented in partnership with Taipei’s city government, proves that efficiency can make a huge difference. Its operator, Giant Taiwan, attributes the success of the programme to the firm’s round-the-clock management system, efficient data management and a customer service call center.

Chung Hui Yu, a commissioner at the Department of Transportation in Taipei, who was also a speaker at the Asian Cycling Forum, explains in her presentation that there are only three things to remember to have a successful bike sharing plan: connect it to the public transport system, allow easy registration and without any annual fee for users, as well as provide easily accessible and well maintained facilities.

In another form of bike-sharing, cycling has also become a solution to help poor students in rural communities access bicycles as a form of sustainable transport. Non-profit group Bike for the Philippines are lending bicycles for free to help poor students in the country who still need to walk three kilometres to school because of lack of access to public transport or who have no ability to pay for its high costs. Through the scheme, the students are able to pedal their way up to their graduation, keep the loaned bikes as a gift, and help their families.

Indeed, cycling has enormous potential to contribute to sustainable development in the region. As ADB’s Leather aptly puts it: “Solutions need to be well planned, carefully implemented and diligently enforced. It is not just
about infrastructure but a holistic approach to manage traffic and travel patterns as well as share by mode.”

“For the past several years, Taiwan has made a commitment to become the bicycling capital of the world,” says Todd Starnes, president and owner of Bicycle Adventures, in a press statement.

Although many countries still do not have a similar established bike network as Taiwan, a growing number of tour operators worldwide are finding lucrative opportunities in providing privately guided cycling tours across Southeast Asia – from Hanoi in Vietnam to Luang Prabang in Laos; from Siem Reap in Cambodia to as far as the island of Koh Kood in the gulf of Thailand; or simply a trip from Singapore to Penang, Malaysia.

United Kingdom-based Bamboo Travel says their clients are increasingly interested in cycling tours when they plan their trips to Asia. At the same time, traffic and pollution is a concern that puts some clients off cycling.

“In the last few years we have seen demand for cycling excursions grow quickly. And we find a lot of our clients now request some time cycling in places that before they used to do sightseeing by car. Clients of all ages
have become more health and environmentally conscious in recent years and cycling has grown as a result,” Ewen Moore, sales director at Bamboo Travel, tells Eco-Business.

“They are very attractive – a fun and healthy way to do some sightseeing,” said Moore.

This story was first published in the Eco-Business magazine. Check it out here.