Consumers dial back spending on sustainable brands amid economic pessimism

A new study finds that across some of the major markets, spending priorities are shifting. Compared to their Western counterparts, Chinese consumers are becoming more sustainability-conscious, though they are far less likely now to pay more for green goods or consider the eco-credentials of products.

Inflation and economic pessimism may be affecting the willingness of consumers to consider sustainability when shopping or to pay more for environmentally and socially conscious brands.

A six-country survey by financial advisory firm Stifel Financial found that the propensity among consumers to pay a premium for sustainability has dropped over the past year in China, the United States, United Kingdom, and France, while the desire to pay more for green foods is flat in Italy and Germany, as consumers prioritise perceived value and lower prices over eco-credentials.

The report’s authors attribute the decline in conscious consumerism with rising inflation, as food and energy prices hit record highs driven by the Russian invasion of Ukraine.

“With inflation, we are being asked to pay more for everything. This is testing the resolve of consumers to pay a premium for sustainability,” said Jim Duffy, managing director and sports and lifestyle brands analyst at Stifel Financial.

Even as the global economy recovers from a historic recession brought on by the Covid-19 pandemic, concerns are now being raised about the next downturn, with warnings coming from leaders that global inflationary pressures will remain high for the next few years. According to latest April data, China’s producer price index rose 8 per cent year-on-year, higher than expectations. 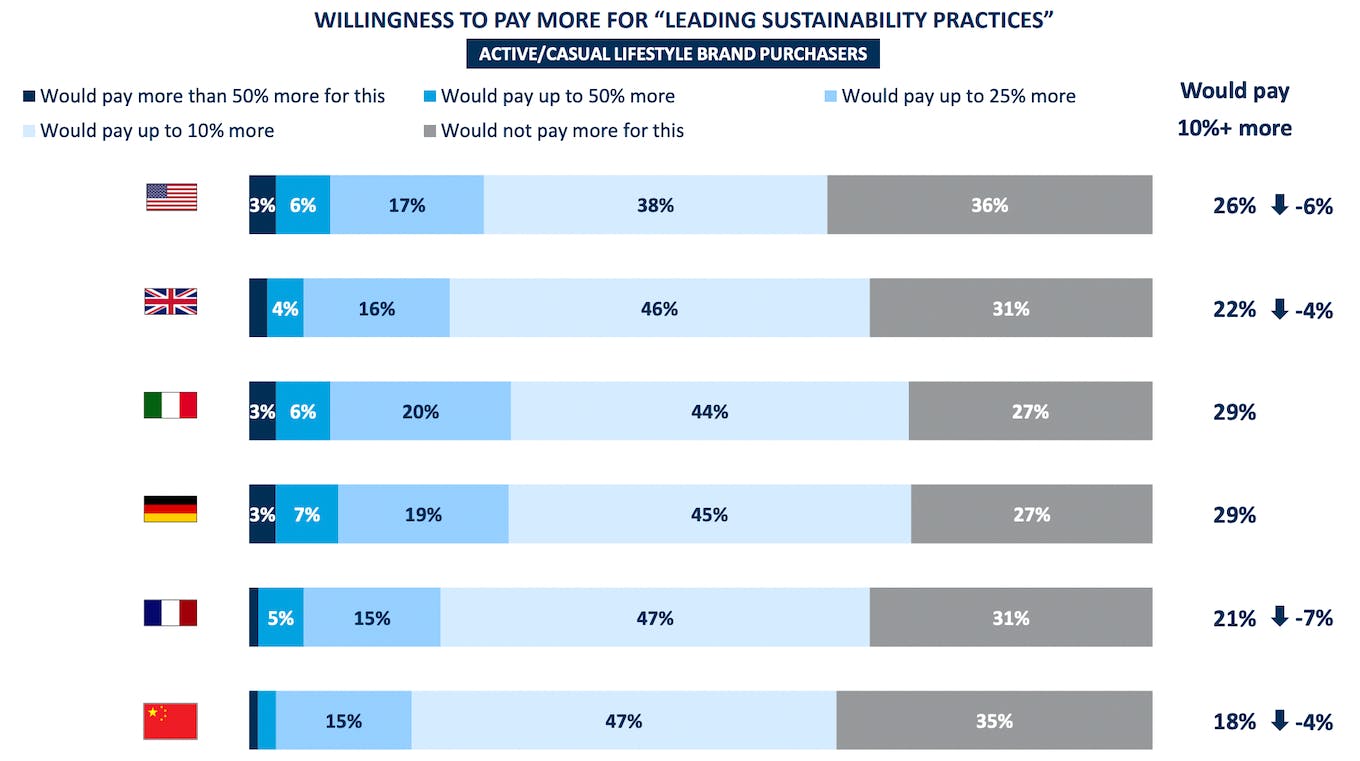 Chinese consumers are also the least likely of the countries surveyed to consider renting goods instead of buying, or buying second-hand products, and are also the least interested in finding out about the sustainability credentials of their purchases. More than half (51 per cent) of Chinese respondents said they do not often look for information about a brand’s sustainability practices when shopping, compared to 28 per cent of American consumers.

But consumers in the world’s second largest economy have shown the fastest growing appetite for sustainability and sustainable brands over the past year, as consumers in other countries have become less eco-conscious.

China consumers are the most likely to care more about the sustainability of the brands they buy than a year ago, show the greatest desire to lead sustainable daily lives, and are more willing (61 per cent) to boycott brands they deem unethical or unsustainable than British (45 per cent), American (41 per cent) or even French consumers (56 per cent).

With inflation, we are being asked to pay more for everything. This is testing the resolve of consumers to pay a premium for sustainability.

Chinese consumers are also far less cynical about corporate sustainability efforts, with nearly half saying that companies are becoming more sincere about their sustainability commitments; in contrast, this does not exceed one in three in Italy, Germany, France, or the US.

Consumers from China increasingly expect the brands they purchase to value sustainability, and increasingly believe that brands should protect the environment and value human rights. By contrast, consumer interest in sustainability has slumped in the US, which the report’s authors attribute to rising price inflation, driven by pent-up consumer demand after the Covid-19 pandemic and the Russian invasion. 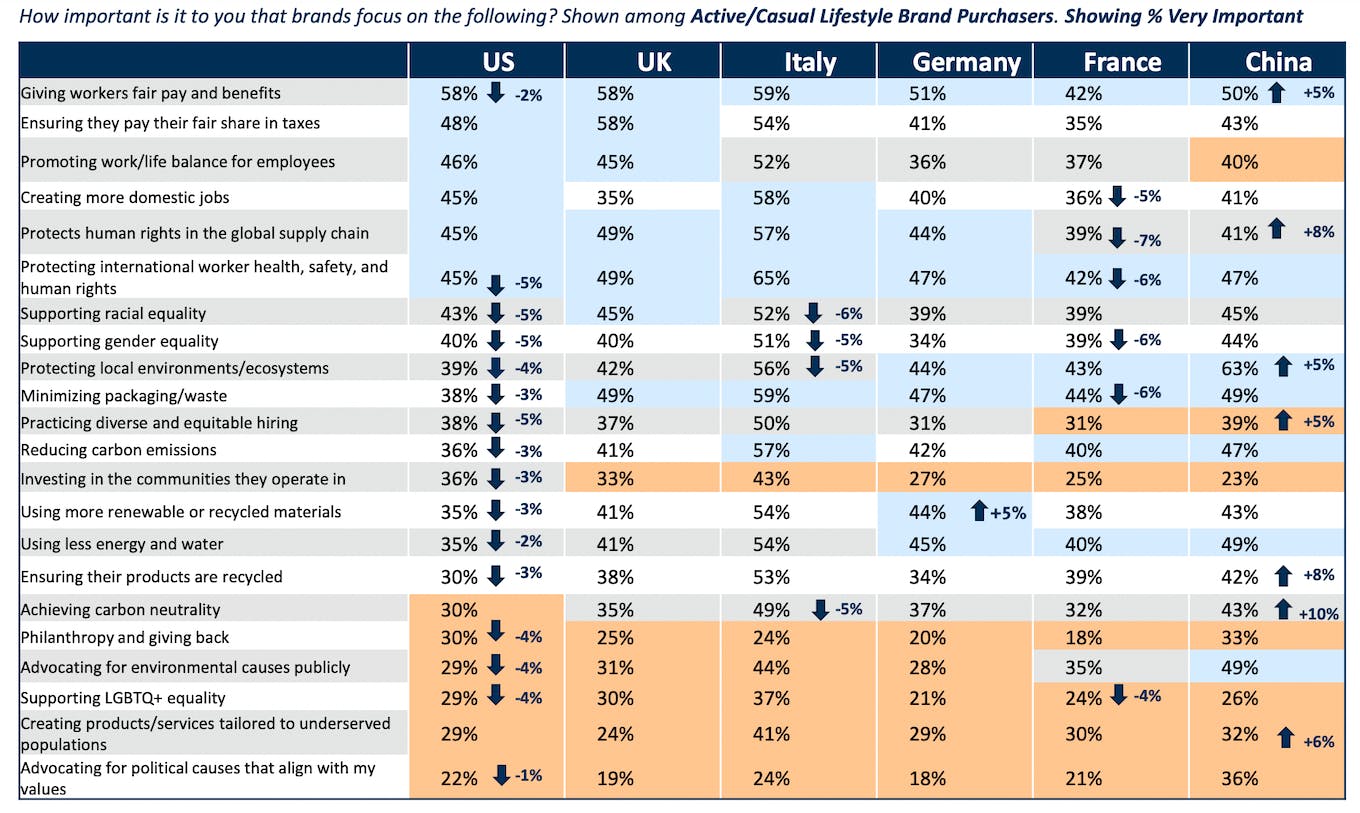 More than eight in 10 American consumers believe it is important for companies to act sustainably, but less than two-thirds (64 per cent) are now willing to pay more for sustainability-conscious brands — down from 67 per cent last year. The US is also the only country in the survey where consumers said they would pay less attention to a brand’s sustainability credentials while shopping. Sentiment towards sustainability fell across 16 indicators in the US, whereas it rose across seven indicators in China.

In February, a study by Credit Suisse found that young people in developing countries are more concerned about the plight of the planet than their peers in rich countries. It also found a greater willingness to switch to a more sustainable lifestyle among young consumers in poorer nations than their wealthier peers in France, Germany and the US.