Young consumers in emerging economies are also more sceptical of company sustainability claims, and are more likely to switch to green products, a survey by Credit Suisse finds.

Anxiety about the plight of the planet is greater in lower-income countries, according to the Credit Suisse Research Institute report released on Thursday. Gen Z and millennials in India, China, South Africa, Mexico and Brazil say they are very worried about the state of the environment, while young consumers in the United States, France and Germany seem less concerned about the health of the planet.

The survey of more than 10,000 people aged 16 to 40, taken in five emerging and five developed nations, found that young consumers are particularly suspicious of corporate sustainability claims, with 63 per cent saying they don’t believe such proclamations.

Young consumers in India and China are more trusting of corporate sustainability claims than their peers in Europe and the US; despite that more than 50 per cent of young Indians and Chinese have little faith in what companies are telling them about how sustainable they are.

There is more support among young consumers in developing countries for stricter government regulation of unsustainable products. They believe that pollutive products such as fast food and fossil fuels, should be taxed or banned altogether. 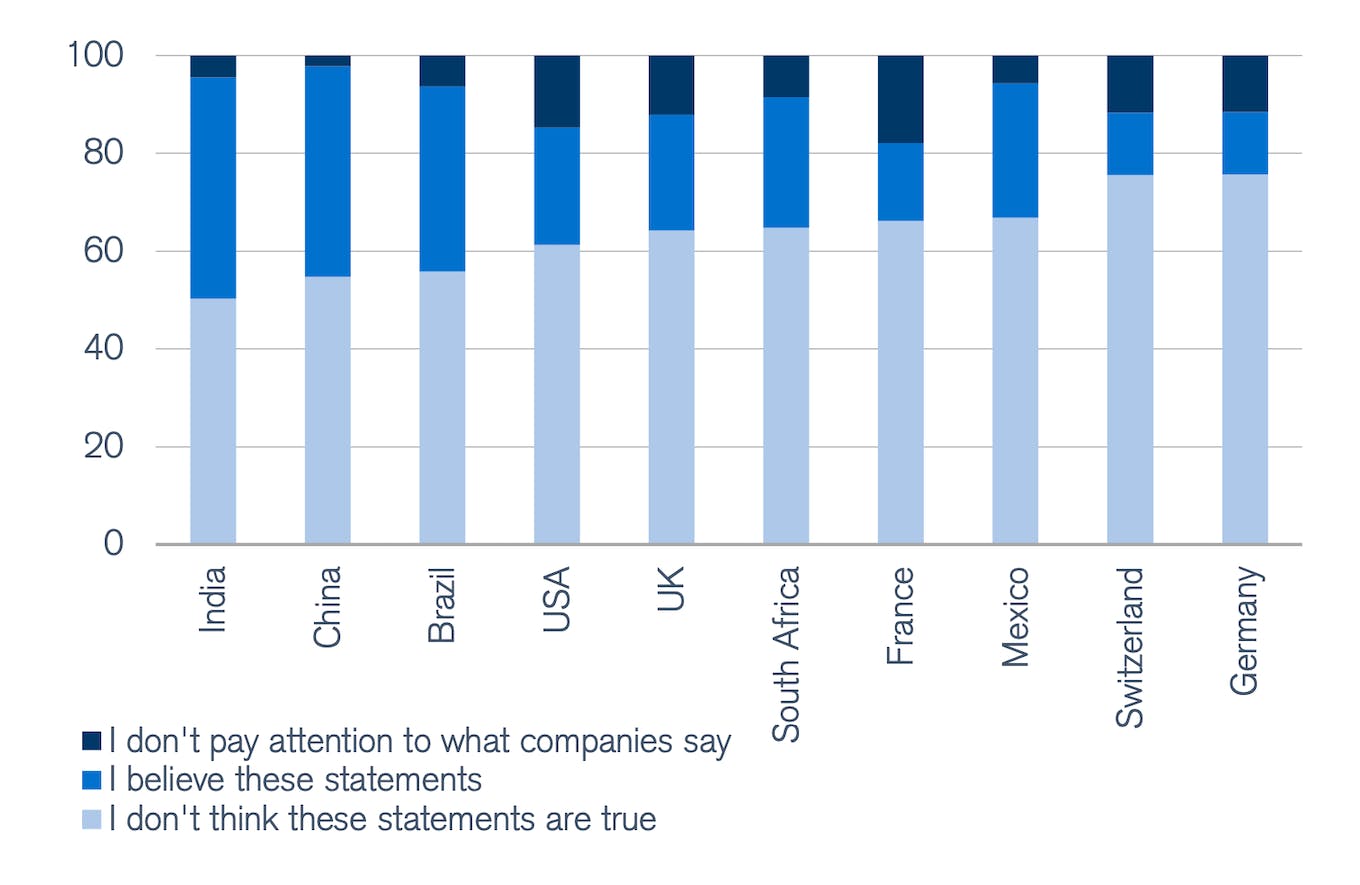 Credit Suisse’s research also challenges the idea that spending on green goods is a luxury of the middle classes in wealthy countries. Young people in emerging economies are more likely to spend on products such as solar panels, home insulation, plant-based food and electric vehicles than their peers in richer countries, the study found.

A willingness to switch to a more sustainable lifestyle is also higher among young consumers in Mexico, India and China than their wealthier peers in France, Germany and the US. French youth are the least likely to pay more for green goods, and Indian young people the most likely. A majority of young consumers in richer nations said they had no plans to curb flying, whereas a majority in emerging economies expect to reduce time in the air. 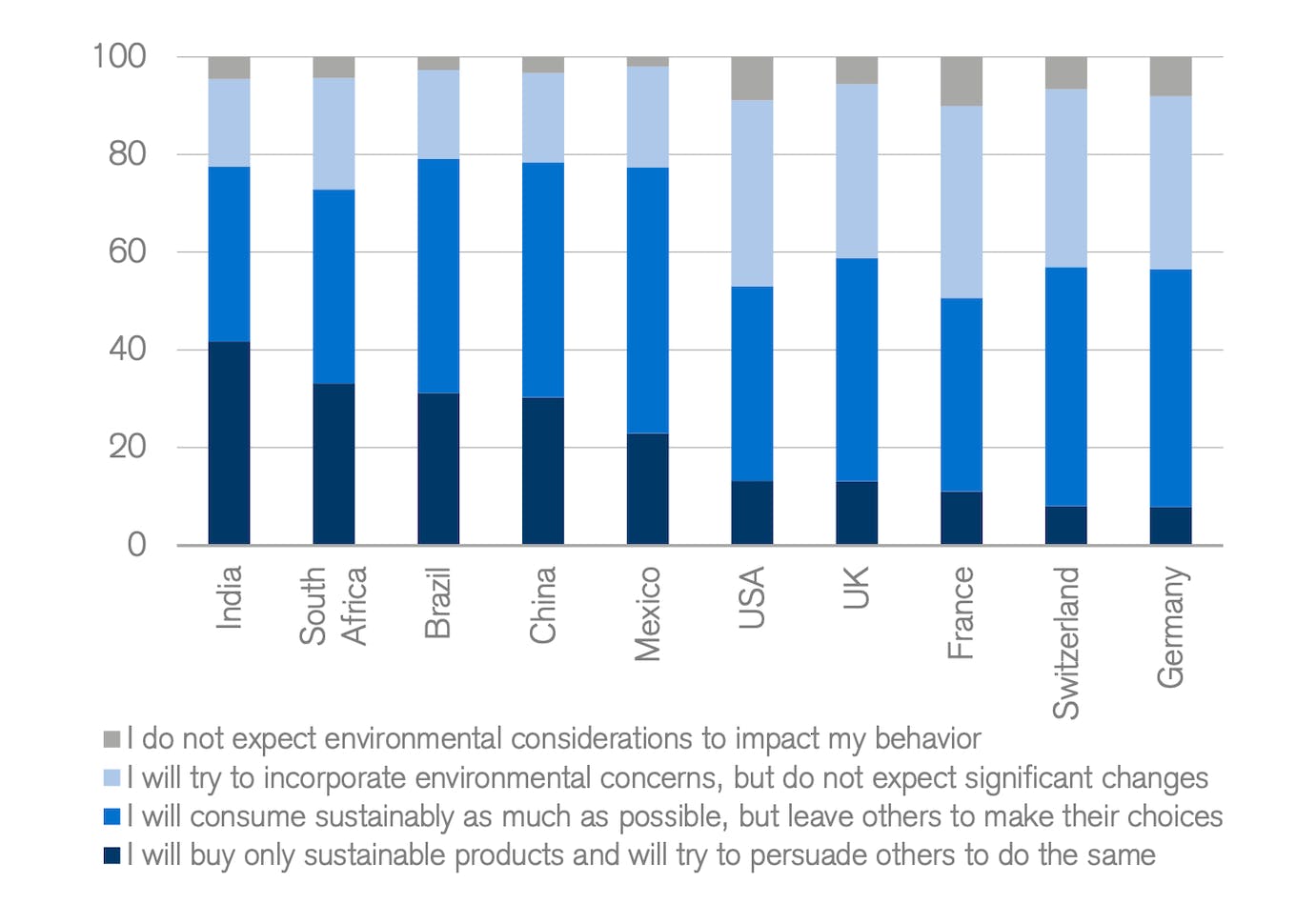 Gen Z and millennials account for 54 per cent of the global population and 48 per cent of consumer spending. Their spending clout is projected to rise to 69 per cent by 2040, according to Credit Suisse estimates.

Eugène Klerk, London-based head of global ESG and thematic research at Credit Suisse, said some sustainable lifestyle choices can save the consumer money, for instance flying less, driving less, and eating less meat. “This might explain why they [consumers in poorer nations] are more engaged with finding solutions,” Klerk said.

“We believe that younger consumers in developed countries may have a lifestyle that is less sustainable than that of consumers in developing economies. This would suggest that they would be more impacted than their peers in emerging markets if they had to switch to a more sustainable way of life, which in turn might explain why they are somewhat less engaged,” he said. 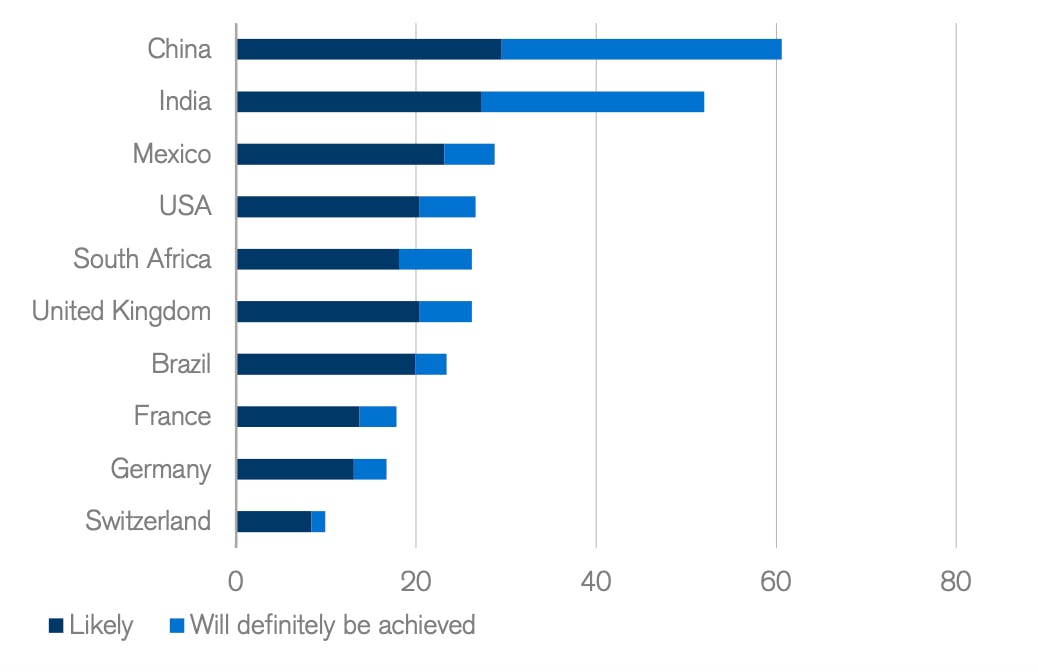 Suspicion about environmental claims extends to governments, the survey found. Young people are not confident that climate targets such as achieving net-zero greenhouse gas emissions by 2050 will be met.

Just 30 per cent of those surveyed think the 2050 net-zero target will likely or definitely be achieved, with big variations in confidence in climate goals by country.

Young people in India and China — countries which have set 2070 and 2060 net-zero targets, respectively — are more optimistic that climate goals will be achieved than their counterparts in Germany, Switzerland and France, developed countries that have set more aggressive climate targets.

Young Americans are the most likely to believe that climate goals will be met. The Biden administration set a 2050 net-zero goal in November.