Worse is to come, faster than expected, even if efforts to curb global warming are stepped up, according to the UN. To stave off the worst impacts of climate change, people need to adapt.

A rise in weather and climate extremes has led to irreversible impacts as natural and human systems are pushed beyond their ability to adapt, according to a new report on climate change. The speed of global warming is exceeding efforts to protect billions of people as unavoidable climate risks become more severe.

About half of the world’s population are highly vulnerable to climate change and the need for climate resilience is “more urgent than previously assessed,” said the report by the Intergovernmental Panel on Climate Change (IPCC), the international body for assessing the science related to climate change.

“This report reveals how people and the planet are getting clobbered by climate change,” said United Nations Secretary-General António Guterres, calling the 3,500-page document “an atlas of human suffering” and an indictment of a “criminal” “abdication of leadership.”

The Working Group II report was put together by 270 scientists from 67 countries. This is the second part of its sixth assessment, with two additional reports due later this year. The first was published in August last year. 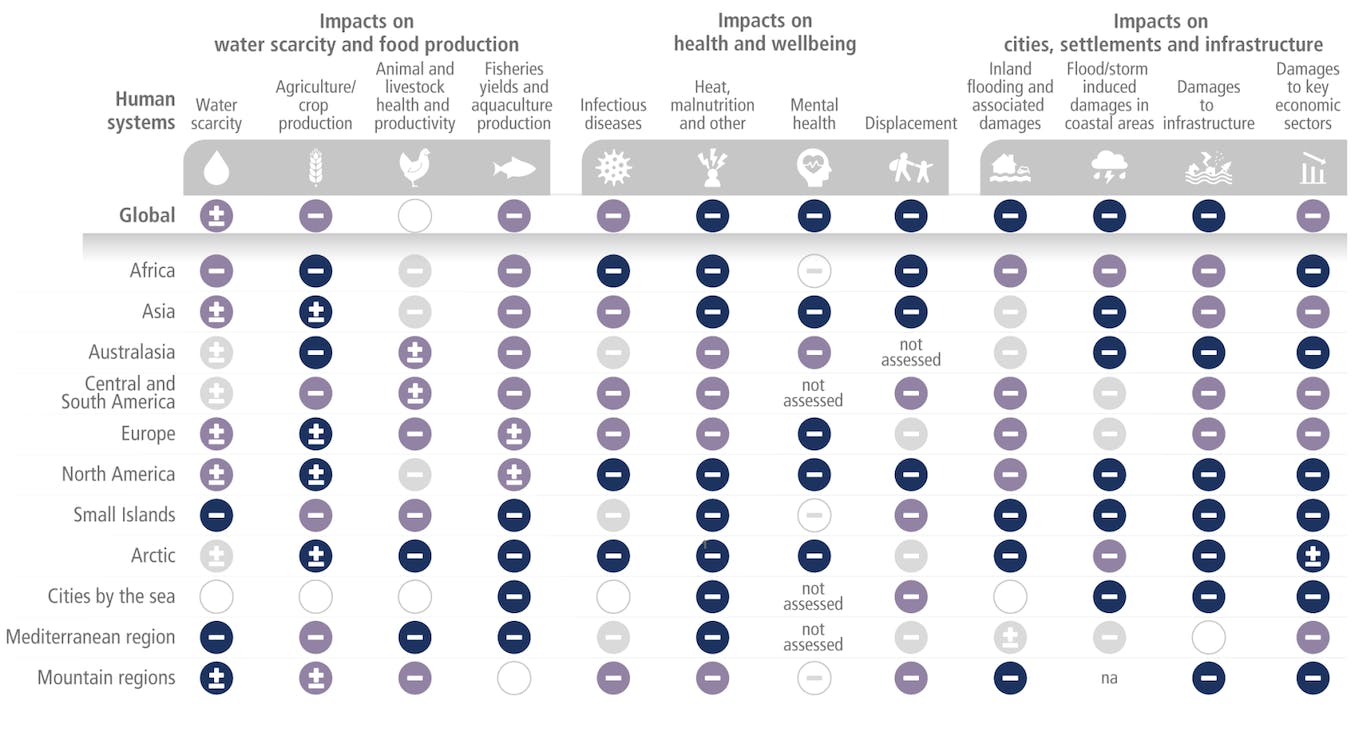 The latest research assesses the vulnerability of socio-economic and natural systems to climate change, negative and positive consequences of climate change and options for adapting to it.

The report marks a “turning point in the fight against climate change”, said Conservation International’s chief executive, M. Sanjayan. “It forces us to reckon with a stark reality: The crisis is here, and it is all around us. This is the true cost of continued inaction: an irreversible flood of human misery.”

Scores of climate hazards are likely to happen at the same time bringing climatic and non-climatic risks head-to-head. Small islands will be the worst affected.

Asia gripped by a climate crisis

Reduced crop yields, social and cultural disruption as well as physical and mental stress are just some of the impacts caused by a warming planet.

Vector-borne and water-borne diseases are increasing in Asia due to a rise in hazards such as heatwaves, flooding, droughts and air pollutants. Heavy rainfall and typhoon risks were identified as being significant, particularly for the East-Asian economies like Japan and South Korea.

Asian cities are on the frontline of the impacts of climate change. The region’s urban areas, poorly equipped to deal with violent storms, have been battered in recent months. Asia lacks the robust city programme funding needed to keep populations safe from climate threats.

Longer-term climate change will increase the forced migration of people across Asia, the report said. In 2019, Bangladesh, China, India and the Philippines each recorded more than four million disaster-induced displacements. In Southeast Asia  and East Asia, cyclones, floods, and typhoons triggered internal displacement of 9.6 million people in 2019, almost 30 per cent of total global displacements.

Analysts have warned that involuntary displacement could drive incidents of insecurity in the region.

“The IPCC has today confirmed what has been obvious to many in the global south who have watched their environments deteriorate in front of their eyes – the climate crisis will continue to affect their ability to access food, water, and maintain an adequate standard of living,” Seema Joshi, director of Campaigns at Global Witness said. “Survival is at stake. This is a humanitarian crisis.”

The report warned that attempts to modify the amount of sunlight reaching Earth, such as by scattering airborne aerosols, will be risky to both humans and ecosystems. It cited the dangers of overcompensating and the lack of knowledge on the matter.

Such efforts will also not stop the rise in carbon dioxide levels, the report noted.

Lethargic action to adapt to an adverse climate has entrenched vulnerability, exposure and risks that will be difficult and expensive to change, the report said. Tackling climate change will not be solved solely by slashing greenhouse gas emissions.

The IPCC has today confirmed what has been obvious to many in the global south who have watched their environments deteriorate in front of their eyes – the climate crisis will continue to affect their ability to access food, water, and maintain an adequate standard of living. Survival is at stake. This is a humanitarian crisis.

The report placed emphasis on the need to adapt by improving the resilience of energy systems and diversifying sources, building key infrastructure and barriers against flooding, early warning systems and nature-based solutions that can help mop up floodwater or prevent landslides.

This will require cooperation across a range of stakeholders and buy-in from all levels of governance, the report said.

Low-income countries, still largely dependent on heavily polluting fossil fuels, have shot back at pressure to get them to cut their relatively low emissions by richer nations which have largely overlooked adapting to the impact these countries are already facing.

Emerging climate-vulnerable nations have been trying to get developed countries to respond to issues around “loss and damage” during previous rounds of global climate talks. The term refers to the impacts of climate change that are too great for countries to adapt to.

The concept which has been debated for more than a decade has become a hugely divisive issue during climate talks. Richer nations have pushed back on the question of loss and damage, fearing that it will bear legal and financial responsibilities down on them.

Developing countries received just US$79.6 billion in 2019 for both climate mitigation and adaptation. This fell short of the annual US$100 billion richer nations had promised to provide by 2020, with adaptation receiving only 25 per cent of the total.

“This stark depiction of escalating climate impacts should light a fire under governments and corporates in the high-emitting economies most responsible for climate change, whose lack of action to date disproportionally affects the most vulnerable across the planet and pushes the world ever closer to a point of no return,” said Nicolette Bartlett, chief impact officer for non-profit CDP.

Low- and middle-income countries have borne a disproportionate share of economic losses due to climate change, which are sending them further into debt. The majority - 71 per cent - of adaptation finance is provided as loans instead of grants. Complex bureaucracy has meant that it can take years for developing countries to access the funds.

Ignore at your peril

Businesses must measure and manage climate risks, or they could be caught in legal crosshairs. The number of climate litigation cases have soared in recent years. Physical damage, the cost of compliance and insurance will increase in the coming years, warned the CDP.

The Asia Investor Group on Climate Change (AIGCC), whose members control more than US$36 trillion in assets under management, said that the increase in the frequency and severity of climate-related hazards pose “significant” and, without adaptation, “persistent” financial risks to investors in the region.

Managing physical risks in an increasing area of focus for investors, according to the group.

“Inaction is a foolish business risk no company can afford,” Bartlett warned.