Key takeaways from the latest IPCC report on climate change

The future is bleak — unless aggressive action is taken to cut global emissions.

Eight years after its last update on climate change, the United Nations (UN) on Monday published its latest comprehensive report on the state of the global climate.

A compilation of more than 14,000 papers on the latest climate-change research was assimilated into the near 4,000-page report by 200-plus authors as part of the sixth comprehensive assessment by the Intergovernmental Panel on Climate Change (IPCC).

It is a stark tome detailing how profoundly humans have altered the climate and what the future could look like if harmful carbon emissions continue on their current trajectory.

The mega-report “is a code red for humanity,” UN Secretary-General António Guterres declared in a statement. “Global heating is affecting every region on Earth, with many of the changes becoming irreversible.”

Humans are to blame

“It is unequivocal that human influence has warmed the atmosphere, ocean and land,” the report summary read in what is the IPCC’s strongest wording yet.

The report reflects major advances in the science of attribution – understanding the role of climate change in intensifying specific weather and climate events such as extreme heat waves and heavy rainfall events.

“What we are seeing in the report affirms the tragic consequence of responding to longstanding scientific consensus on climate change with denial in both the national and global levels of policy,” said Chuck Baclagon, Asia regional finance campaigner for conservation group 350.org.

Carbon dioxide concentrations are higher than at any time in the last two million years, the report found. Consuming fossil fuels has combined with agriculture to push methane and nitrous oxide—also counted as greenhouse gases—to record levels for at least the past 800,000 years. 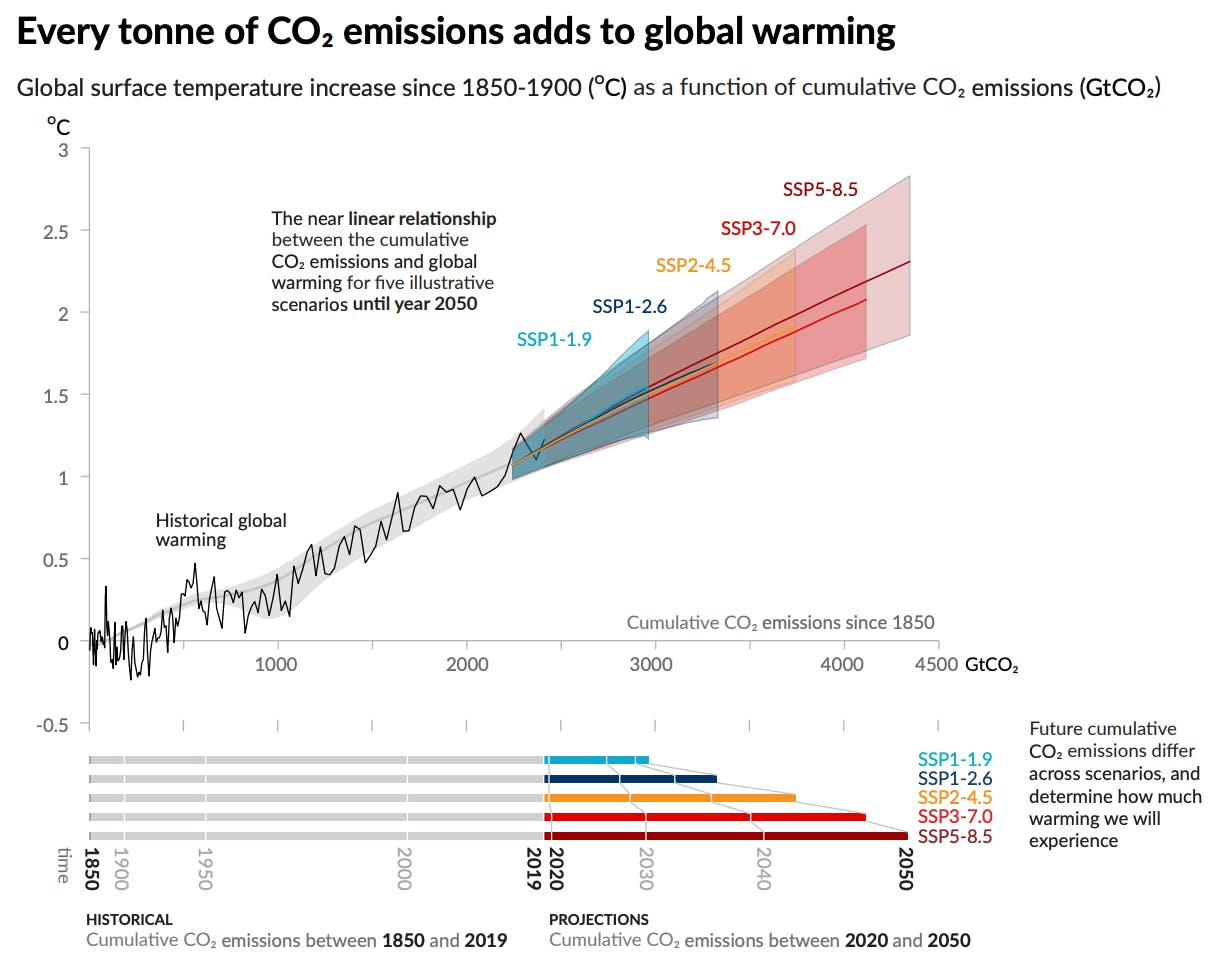 Evidence of observed changes for several types of extremes since the previous Assessment Report (AR5), in particular for extreme precipitation, droughts, tropical cyclones and compound extremes—including dry/hot events that contribute to outbreaks of wildfires—can be attributed to human-induced emissions.

“Humans have been implicated in the changes we have seen in the climate; there is still a chance for redemption but the window of opportunity is rapidly closing,” Wai-Shin Chan, head of Climate Change Centre of Excellence and global head of ESG (Environmental, Social and Governance) Research at global bank, HSBC.

The Earth is on the cusp of the 1.5°C threshold

The Earth is warming, although not uniformly. Even under the most stringent emissions-reduction scenarios the IPCC thinks it is “more likely than not” that temperatures will exceed 1.5ºC—the pledged target of the 2015 Paris climate agreement—above the preindustrial level by end of the century.

“Unless there are immediate, rapid, and large-scale reductions in greenhouse gas emissions, limiting warming to 1.5°C will be beyond reach,” said Ko Barrett, senior advisor for climate for the National Oceanic and Atmospheric Administration (NOAA), a US based-regulatory agency, and one of three IPCC vice-chairs, in a press briefing on Sunday.

To stand a good chance of keeping the increase below 2ºC by reducing emissions would require the governments of the world to step up their efforts to swiftly end the release of carbon dioxide and other greenhouse gases.

“What the world requires now is real action. All major economies must commit to aggressive climate action during this critical decade,” John Kerry, the US Special Presidential Envoy for Climate said in a statement.

Scientists in the report called the pledges made by signatories of the Paris agreement “insufficient to reduce greenhouse gas emission enough” to keep global warming well below 2°C.

The negotiations at the climate summit to be held under the UN Framework Convention on Climate Change this November—COP26—will likely be dominated by demands for greater action. In order to cut emissions, poorer nations will need about US$100 billion a year in climate funds from rich countries.

Humanity can no longer delay “ambitious” climate action, US Secretary of State Antony Blinken said on Monday after the release of the UN report.

“This moment requires world leaders, the private sector, and individuals to act together with urgency and do everything it takes to protect our planet,” Blinken said in a statement.

Climate change is already having an impact around the world and will continue to do so even if greenhouse-gas emissions are reduced and can stabilise. Sea-level rise is guaranteed to continue through the century—with a mid-range estimate of between 1.4 and 2.5 feet—no matter what steps are taken now to rein in emissions.

“In the longer term, sea level is committed to rise for centuries to millennia due to continuing deep ocean warming and ice sheet melt, and will remain elevated for thousands of years,” the IPCC report found.

Already, associated flooding has nearly doubled in many coastal areas since the 1960s, with once-in-a-century coastal surges set to occur once a year by 2100. Relative sea-level around Asia has increased faster than the global average, the scientists found, with coastal area loss and shoreline retreat. Scientists predict, with high confidence, that the sea level will continue to rise in this region.

“People are in harm’s way, infrastructure is increasingly outdated and in many places not designed for the new environmental realities, and extreme weather events continue to occur one after another,” NOAA said in official press comments.

Glaciers will continue to shrink for decades or centuries, regardless of the steps that are taken now. The thaw of Arctic permafrost, which itself releases large amounts of carbon and methane, “is irreversible at centennial timescales,” according to the report.

Warmer temperatures will lead to combinations of extreme events that are harsher, longer-lasting, and more widespread ​​than anything “in the observational record,” according to the report.

All is not lost

Unlike previous assessments, scientists have been able to project what happens as the world reduces its use of fossil fuels. Aggressive action to drastically cut global emissions to the wick over the next few decades could just limit the temperature increase to about 1.5°C. That would also minimize the worst expected impacts, such as torrential rain and flooding and deadly heat waves, later in the century, according to the report.

For the first time, the Sixth Assessment Report provides a more detailed regional assessment of climate change, including a focus on useful information that can inform risk assessment, adaptation, and other decision-making, and a new framework that helps translate physical changes in the climate – heat, cold, rain, drought, snow, wind, coastal flooding and more – into what they mean for society and ecosystems.

Advanced technologies and the rollout of renewable energy may help if they come into widespread use and could even help to reverse the temperature increase.

“[W]e’re making breakthroughs with solutions. With solar and wind now the cheapest way to produce new power in the majority of the world, mobility freed from oil, and finance dwindling for coal, a world free of fossil fuels is becoming possible,” Kosonen said.

“This report is a reality check,” said Valérie Masson-Delmotte, co-chair of Working Group I at the IPCC. “We now have a much clearer picture of the past, present and future climate. If we reduce emissions to net-zero by 2050, we can keep temperatures close to 1.5C.”