Climate change will force mass migration of 1 billion by 2100

Asia Pacific is the most vulnerable region to climate change, Bangladesh is the country most at risk, and poor people are to be hit the hardest, prompting migration on a massive scale, a sobering report by Asian Development Bank has found.

Massive migration is foreseen all over the world by the end of the century, with the Asia-Pacific region identified as the most vulnerable if the current climate change scenario does not improve.

“Migration is happening all the time, but with unabated global warming … we’ll have to move over a billion [people],” said Professor Hans Joachim Schellnhuber, director of climate science research institute Potsdam Institute for Climate Impact Research (PIK) in a press conference last Friday.

The Asian Development Bank (ADB) and the PIK released a joint report called A Region at Risk: the Human Dimensions of Climate Change in Asia and the Pacific, which showed that the region faces severe consequences for the environment, economy and human living conditions as a result of climate change.

Professor Schellnhuber noted how a rich and well-organised country like his native Germany is able to take in more than a million refugees in a year at the height of the Syrian refugee crisis. However, less developed countries in Asia may not be as ready and may lack the same capacity to take in large influxes of migrants fleeing the effects of climate change. 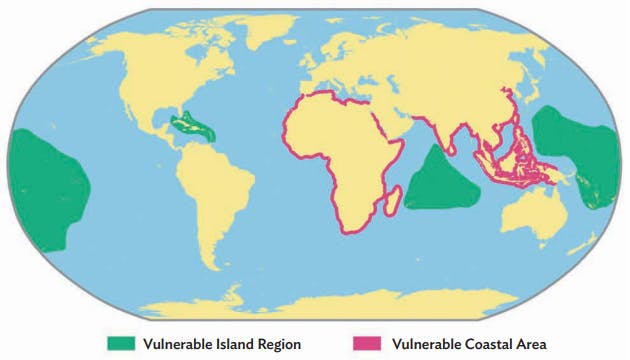 According to the report, a temperature increase of 6 degrees Celsius above pre-industrial times is projected for some parts of Asia and the Pacific by the year 2100. Such increases in temperature will lead to drastic changes in the region’s weather systems, agriculture and fisheries, biodiversity, trade and urban development.

Large temperature increases are the likely result of a reliance on fossil fuels - which continue to dominate the region’s energy mix - and extreme heat events that typically happen once in hundreds or millions of years will become a daily, year-round occurence, with more pronounced effects in the tropics, the report predicted.

A summer heat wave known as a 3-sigma event that happens once in 740 years, and an event stronger 5-sigma event that occurs once in 3 million years, could become commonplace in tropical countries such as those of Southeast Asia by the late 21st century.

The living conditions that result in the tropics would make it almost impossible for people to live outside, prompting migration on a massive scale.

The following six Asia-Pacific territories are the most susceptible to climate change-related migration: Bangladesh, which has the world’s largest delta, the Philippines archipelago, China, which suffers from droughts, the Mekong Delta, which faces a serious food security issue, the flood-prone Indus Delta, and small island states like Tuvalu, Maldives and Fiji. 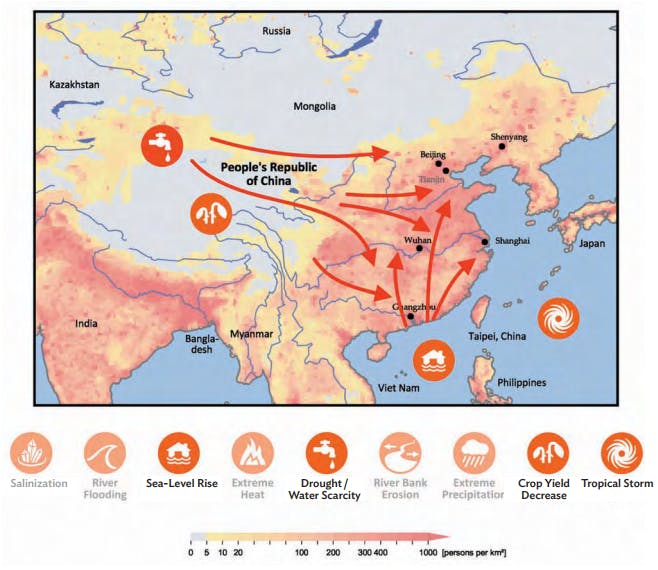 Another side-effect of climate change for Asia is likely to be severe economic damage.

Despite the region’s unprecedented economic growth in recent years, Asia Pacific is home to two-thirds of the world’s poor, according to ADB vice-president for knowledge management, Bambang Susantono.

Climate change will significantly impact agriculture, a sector on which the majority of the region’s poor depend. 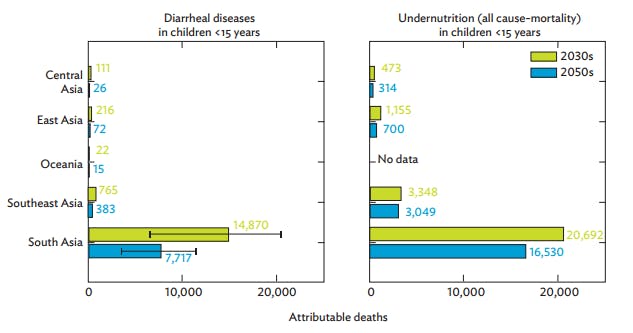 Child deaths attributable to climate change by 2030 and 2050. Image: ADB

“In South Asia, food shortages induced by climate change could increase the number of malnourished children by 7 million by 2050,” Susantono noted.

The poor living in coastal areas also depend on marine ecosystems for their livelihoods, and these ecosystems are seriously threatened by climate change.

Many of Asia’s urban poor live in low-lying coastal areas that ar emost exposed to floods and storm surges.

Schellnhuber demanded urgent action for Asia to contribute to the fight against climate change.

“Asia is now the economic powerhouse of the world, but the values are being generated using the old conventional model of industrialisation,” he said.

“Asia needs to leapfrog Europe and US, particularly in the energy sector. When we look at expected growth, it will all come from Asia. If Asia can turn the tide, the region will make a major contribution to the survival of our civilisation,” Schellnhuber said.

He highlighted steps the region needed to take to combat climate change.

Asia should switch to renewable energy, introducing more solar infrastructure as it is scalable and can be applied and deployed anywhere.

He urged for a shift to the use of conventional materials like clay or wood in construction as an alternative to concrete or steel, as this is less carbon intensive.

Third, transport needed to be powered using hydrogen instead of gasoline.

Finally, cities need to integrate climate adaption and mitigation in urban planning to reduce emissions and improve the quality of life in cities.

Meanwhile, Susantono reiterated the ADB’s commitment to abate the issue. The bank is pledging to double its climate financing to US$6 billion annually until 2020, with US$2 billion for mitigation and US$4 billion for adaption.

This money will be spent on energy efficiency, renewable energy, sustainable transport, urban development, as well as agriculture and infrastructure.