Climate-linked strife now ravishing Mali, Venezuela and Syria could play out in vulnerable countries such as Indonesia, India, Vietnam and even China, a new report warns. Rich countries are not immune.

The tragic recent histories of Syria, Mali and Venezuela are stark warnings of how climate change can trigger a domino effect that leads to societal ruin.

Even major emerging economies such as India and Indonesia are vulnerable to the cascading effects of climate change, and governments and businesses are poorly prepared for these existential threats, a report from risk consultancy Verisk Maplecroft warns.

Immediate climate effects such as water stress and crop failure can lead to resource competition and mass migration, which can spiral into civil unrest, political instability and war — a scenario that has played out in Syria after the worst multi-year drought in 900 years.

Extreme drought has also led to social uprisings, mass displacement and violence in Mali, while in Venezuela chronic water scarcity and coastal flooding have precipitated socioeconomic meltdown in a country with the world’s largest oil reserves.

Verisk Maplecroft’s Environmental Risk Outlook, published on Thursday, warned that countries that seem insulated from the impacts of climate change lack the safeguards for protecting their societies as extreme weather worsens.

As the intensity of heatwaves, storms and floods speeds up, so do the time horizons for rising global instability.

“Governments are beginning to create extensive mitigation plans for physical climate threats, yet the low levels of investment in looking at the secondary risks show that most are almost entirely unprepared to deal with the wider political, economic and developmental impacts of a warming planet,” said Will Nichols, Verisk Maplecroft’s head of climate risk and resilience.

The report assessed the vulnerability of 196 countries across 32 issues, including exposure to climate calamity, natural resource security and extreme poverty, using risk data from sources including the United Nations and World Bank.

Countries were either classified as “precarious”, “vulnerable” or “insulated” from cascading climate impacts. All of South Asia, and most of Southeast Asia, is considered vulnerable. 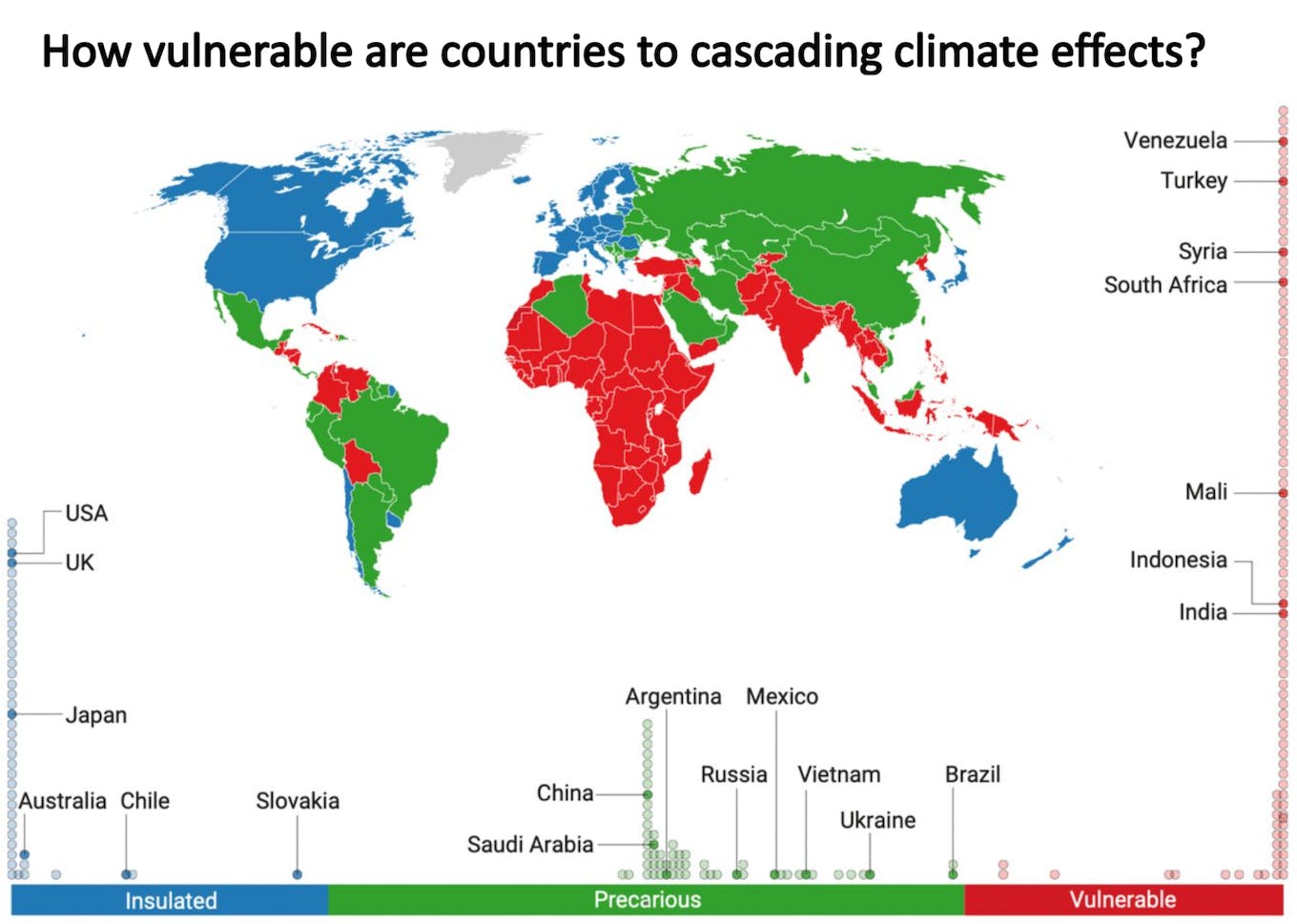 Singapore is the only Southeast Asian country deemed insulated, with governance, social policies, infrastructure and food security robust enough to weather climate impacts. The United States, most of Europe, Japan and South Korea are similarly insulated.

However, the report noted that cascading climate impacts can jump borders, so insulated countries like Singapore may end up dealing with knock-on impacts from neighbouring Indonesia, such as mass migration. 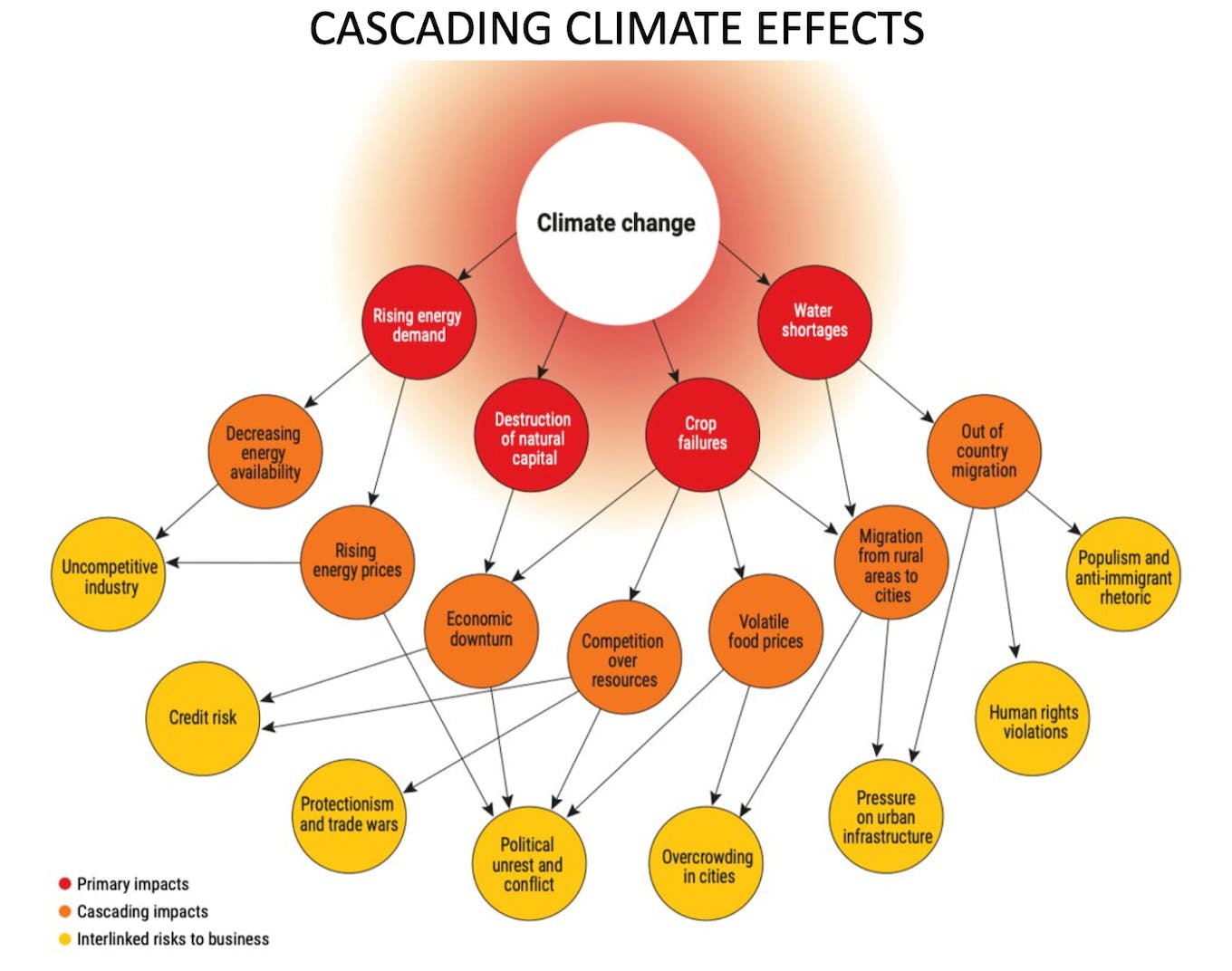 It is difficult to predict where conflict may first arise as a result of cascading climate risk, but Verisk Maplecroft noted that parts of Asia that are already trouble hotspots, such as Myanmar, southern Philippines and the Thai-Malaysian border, are particularly vulnerable to climate-related tensions.

Nichols told Eco-Business a warning sign for climate conflict is where rising temperatures and extended droughts make agriculture impossible. “In some instances, farmers may be driven into cities from land which has become marginalised due to climatic changes,” he said.

“It’s easy to see how this type of urban migration could spark unrest in cities that are already overcrowded that could spill over into great instability. Another direction could see farmers staying put, but protesting their situation to the authorities — which can spiral into larger incidents, especially if fuelled by a heavy-handed response from governments.”

Any climate-induced resource shortage has the potential to lead to conflict, but water scarcity is proving to be the most likely trigger point in South Asia, as countries build dams near major rivers that will secure supplies to endure a more arid future, but disrupt flows to nations downstream, Nichols said.

“Water shortages would no doubt see flare ups that have the potential to snowball into extremely serious incidents,” he said.

This year, records have already been broken for flooding in Australia and Malaysia, wildfires in the United States and Europe, and drought in East Africa, while unprecedented heatwaves have been reported from the United Kingdom to China.