In the pursuit of profit, companies often lose sight of environmental or social concerns; but to thrive in the 21st century, these concerns should not be an after-thought but a priority. Failure to address these issues would mean failure to live up to the expectations of consumers today, who are demanding that companies behave responsibly, says David Kiu, consumer goods giant Unilever’s vice president of sustainable business and communications.

This is why Unilever, in recent years, has been showing leadership in raising sustainability standards throughout its business units and at geographies where it operates. The company, like many large multinationals, is in a powerful position to influence communities and the environment because its products and services touch the lives of millions and even billions of people.

The Anglo-Dutch company, which set a vision in 2010 to “double the size of the business whilst reducing our environmental footprint and increasing positive social impact”, has even proved that behaving responsibly can boost profits.

In 2013, its net profit grew 9 per cent from a year ago, and at the same time it reaped numerous global awards for its sustainability efforts and topped several global corporate sustainability rankings such as the 2014 Sustainability Leaders Survey by consultancies GlobeScan and SustainAbility, and the ‘Global 100 Most Sustainable Corporations in the World’ list by Corporate Knights.

Unilever’s sustainability strategy, published in its ‘Sustainable Living Plan’ in 2010, identifies nine measurable environmental and social targets in the areas of improving health and well-being, reducing environmental impact, and enhancing livelihoods. The firm’s ability to make a difference to people’s lives on a large scale is what motivates Kiu, who joined Unilever in 2012 after years in various roles in the government and private sector.

He has been involved in several sustainable social development projects, including the world’s largest hand-washing programme for children’s schools, run by Unilever’s soap brand, Lifebuoy. Currently, he manages the company’s communications and sustainability teams in Asia Pacific, Africa, and the Middle East.

Last year was a watershed year for corporate responsibility. There was a growing trend of society questioning the roles and obligations of business to the wider community, as evidenced by movements such as the People’s Climate March in New York last September. Aspects of company practices such as the compensation of chief executive officers, corporate ethics, and environmental exploitation received a lot more attention last year than in the past, which triggered a crisis of conscience among companies.

This presented an opportunity for  businesses to engage in a constructive dialogue about their interaction with society and the environment and make changes to their operations in order to create a more sustainable, shared future.

Hence, we saw more commitments from companies in areas such as supply chain transparency and extended producer responsibility, where a manufacturer demonstrates greater responsibility for the environmental performance of a product even after it is used by consumers by making items easier to reuse or recycle. 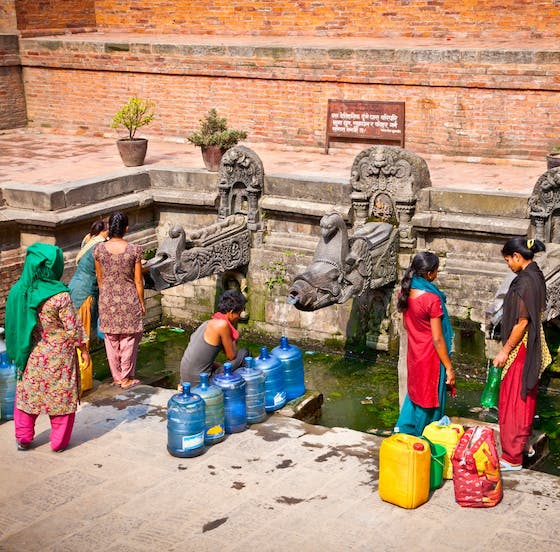 People line up to get drinking water in Nepal. Access to clean drinking water remains a big development issue in many parts of Asia. Image: Shutterstock

There has been a build-up of research and activity around climate change after the release of the Intergovernmental Panel on Climate Change (IPCC)’s fifth annual assessment report last year, and this momentum will build and keep climate change high on the corporate agenda as we approach the UN climate conference in Paris at the end of the year.

Companies will also need to pay close attention to the Sustainable Development Goals (SDGs), which will be finalised this year and form the basis of the global development framework beyond 2015. The goals, which will define priorities such as fair labour standards, a minimum living wage, and reducing wealth disparity, an important chance for the global community to redefine the focus of human progress. If businesses want to thrive in the 21st century, they will have to pay attention to society’s priorities for the future and ensure that their strategy is aligned to these values.

Third, companies will increasingly look beyond social and environmental responsibility to building winning business models that embed sustainability into the core of the business. If this is achieved, businesses will be able to continue growing while promoting sustainability. Transforming the way businesses operate to grow sustainability will be the Holy Grail for companies in 2015.

The outlook is quite good for the coming year. There are new governments taking power in Asia that are committed to improving the welfare of their citizens in a sustainable manner. In India, for example, Prime Minister Narendra Modi has prioritised expanding access to sanitation and improving cleanliness, while in Indonesia, new President Joko Widodo has begun to cut fossil fuel subsidies and pledged to protect the country’s peatlands. Sustainable development is critical to the mandate of these governments and this sets the scene for the region to make huge progress on sustainability - not just in 2015, but for the next three to five years.

I am reluctant to make a definitive prediction, but there is a lot of passion, commitment, and determination to act on climate change, which is cause for optimism. This stems from developments such as the recent agreement between the United States and China to reduce greenhouse gas emissions, and the strong scientific basis for climate change presented in the IPCC’s fifth assessment report. The more visible impacts of climate change also underscore the need for a strong global climate change.

The public wants action on climate change and companies are willing to support an agreement too. The success of the conference will ultimately hinge on whether elected leaders step up and demonstrate political will to commit to ambitious and binding targets on emissions reductions. It remains to be seen whether governments will make political decisions not just for their own countries, but also negotiate a consensus between nations that do not see eye to eye during the conference.

While the specific initiatives Unilever has in store for 2015 will be revealed in the course of the year, our work will be guided by the overarching priority of embedding sustainability deeper into our business model and corporate strategy. The industry today focuses more on sustainability as the right or ethical thing to do than as a strategic growth opportunity. Turning sustainability from an important responsibility to a driver of business growth is a solution we hope to crack in 2015.

We also hope to progress on our existing commitments, such as sourcing 100 per cent sustainable palm oil from certified, traceable sources, which will be an industry first.

But even as we improve our own manufacturing commitments by reducing water use, packaging, and waste, we want to make a transformative impact on the whole industry and wider society. An example of transformative sustainability development is the phasing out of ozone-depleting chlorofluorocarbons (CFCs) from manufacturing under the Montreal Protocol - Unilever has an ambition to leverage on the scale and size of our company to achieve similar major changes.