Increasing pressures of climate change in the region have convinced Asian leaders of the need for policies and investments that push low-carbon growth, says Anthony Jude, leader of the Asian Development Bank's energy practice.

With close to three decades of experience in the energy sector, Anthony Jude, senior advisor and leader of the Asian Development Bank’s (ADB) energy practice, has seen Asia’s policymakers grapple with the challenge of satiating the region’s growing appetite for energy in an affordable and sustainable way

Since 1990, energy demand in the region has doubled even as rapid industrialisation and the burning of fossil fuels have created stresses on the quality of life in Asia. Air pollution in cities such as Beijing can reach levels 20 times higher than is deemed safe by the World Health Organisation, while toxic effluents from coal mining threatens natural ecosystems and communities.

But in recent years, he notes, the pronounced effects of climate change in Asia such as storms and rising sea levels have led governments in the region to make policy commitments and investments that would have been unimaginable five years ago.

As the head of ADB’s energy division, Jude leads the bank’s efforts to help its 44 developing member countries walk the tightrope between balancing economic growth with environmental and social needs. He oversees initiatives which expand access to clean energy in the region, and provide training and education.

Jude, a Malaysian, has been at ADB since 1992, and held leadership positions in the bank’s energy and transport mission, as well as its residential mission in Cambodia. He tells Eco-Business that rising awareness among policymakers and the public will make the region’s transition to a green economy politically and economically feasible. 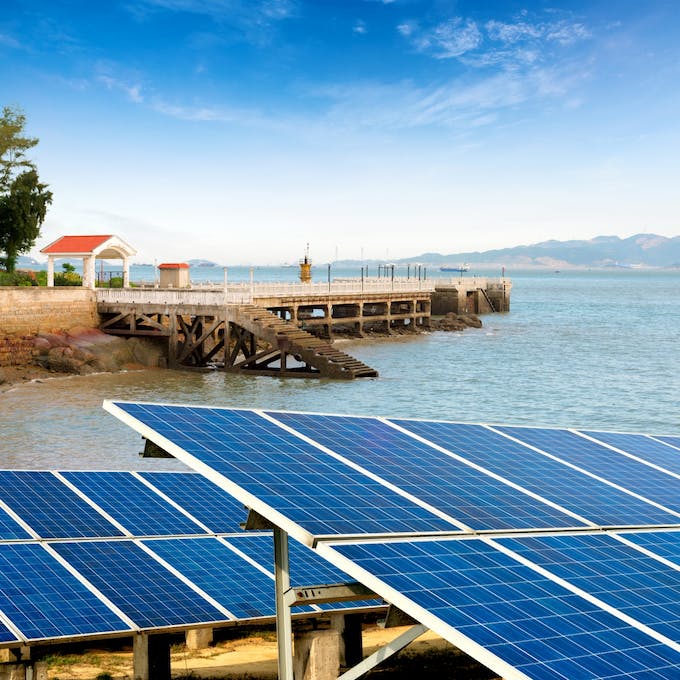 Solar and wind energy projects in China are expected to rise after it signed a global emissions reduction agreement with the United States. Image: Shutterstock

The pledges by US and China to reduce their carbon emissions by a fixed date, are significant. But even if we set aside the targets, the very fact that this deal was made is astounding.

For the US, historical emissions had enabled its success, while China’s transformation into an economic powerhouse today is coupled with a significant rise in emissions. China has previously insisted that richer countries bear greater responsibility for climate change and emissions cuts, while the US has refused to act unless China, its biggest economic rival, acknowledges and acts on its contribution to emissions too.

This disagreement between two of the world’s largest polluters, which are also figureheads for the developed and developing world, has created a deadlock on negotiations.

But this deal shows that there is hope for transformative action at the global level. It will generate enormous opportunities in multiple sectors to apply renewable energy and energy efficiency solutions – hopefully not just for US and China, but also the countries that follow to set emission targets.

The disruptive effects of climate change have helped reinforce the importance of sustainable development for policymakers and the public, and countries in the region have made green policy commitments and investments that would have been unimaginable five years ago.

Business will take the cue from government initiatives in supporting green growth projects. For example, China and India will be building hundreds of smart cities, which will include green transportation, energy efficient building designs and appliances, smart meters, decentralized power generation and distribution, among others.

When the government expresses support for sustainability-driven projects, the private sector will similarly pursue such activities. We therefore expect more private sector activity in areas related to energy efficiency and renewables in countries such as China, India, Singapore, and Malaysia, where clean growth is high on the government agenda.

Asia is in a good place to achieve greater sustainability in the coming year. The disruptive effects of climate change have helped reinforce the importance of sustainable development for policymakers and the public, and countries in the region have made green policy commitments and investments that would have been unimaginable five years ago.

For example, most Asean countries would not have supported renewable energy five years ago, but today, most of them have policies in place to support their development. Thailand demonstrated early leadership by doing so in 2008, and last year, gas-producing nations like Uzbekistan have drawn up plans with ADB’s assistance to develop 4,000 megawatts of grid connection solar projects.

Thanks to commitments such as these, the environmental performance in some countries has improved, resulting in better urban air quality in some cities, improved access to education, and improved measures to address energy supply security, among others.

ADB has always positioned inclusive sustainable development as a win-win solution to a number of developing Asian challenges, and we plan to push harder to ensure that concepts like green growth enter the mainstream.

In order to do so, ADB has set a target of US$2 billion per year to support green growth projects, and will maintain or increase this level of financing.

The China-US emissions deal gives great momentum in the lead up to the climate conference in Paris. China’s commitment also sends a strong message to all of Asia. However, even with the two major emitters and the European Union having set targets, we are still in danger of breaching the safe zone; global temperatures may still rise beyond two degrees Celsius, and this will imperil us all, especially developing Asia.

It remains to be seen whether other large countries, including India, Australia, Russia, and Brazil will be so willing to follow the lead of US and China. I am quite optimistic that the European countries would reach a consensus that would help address global warming. I expect India to also support the climate initiative by then.

ADB sees public private partnerships (PPP) as a key requirement to open the floodgates of private investment into Asia, and is continuing to make PPP central to its operations.

Our recently opened Office of Public Private Participation will lead our effort to help developing Asian countries access the expertise of private companies in implementing infrastructure projects efficiently. The office will help ADB’s regional departments by acting as a knowledge partner on PPP and performing quality control and business development functions, among other roles.

Another ADB initiative that I am focused on is our Green Bonds, which provide investors an opportunity to back in sustainable solutions that promote the transition to low-carbon and climate resilient growth. ADB has issued more than US$2 billion in water and clean energy bonds between 2010 and 2014. The green bond that will be issued in 2015 is tentatively set at US$500 million.