If the region continues to eat meat and seafood at current rates, by 2050 the equivalent of an additional 95 million cars will be on the road and a land area size of India will be used, according to a new report. Is there a better way to tackle Asia's protein crunch?

Asia is in danger of eating its way to environmental disaster unless we rethink how food is produced.

The world’s biggest carbon-emitting region will increase greenhouse gas emissions, land and water use and antibiotic resistance risk by dangerous amounts over the next 40 years if its appetite for meat and seafood continues unchecked, a report from Asia Research & Engagement (ARE) has found.

Even a large-scale switch to plant-based diets is unlikely to occur fast enough to mitigate the impact of projected meat and seafood demand in Asia by 2050 as the region’s population and affluence rises.

Our current production and consumption systems have outstripped our environmental holding capacities.

Asia’s increasingly meat-based diet, filleted by a population projected to rise from 4.3 billion to 5.2 billion, will see greenhouse gas emissions grow from 2.9 billion tonnes of carbon dioxide a year to 5.4 billion tonnes by 2050—equivalent to the emissions of 95 million cars—according to the report commissioned by ADM Capital Foundation.

Antimicrobials used to prevent infections in livestock will increase by 44 per cent by 2050, according to the study, increasing the risk of diseases in animals and people becoming resistant to treatment.

The World Health Organisation has identified antibiotic resistance as one of the major threats to human health today. For example, colistin, the antibiotic ‘of last resort’, is used on an industrial scale to boost the weight of healthy chickens, and could render life-threatening infections untreatable.

Unless we rapidly chart a more sustainable path together, the growing Asian appetite for meat and seafood is a recipe for environmental destruction.

Plant-based food could provide a more sustainable alternative to meat or fish, while “circular, regenerative” approaches to farming can be adopted, such as using sustainable animal feed and harvesting rainwater to irrigate crops, said Huiying Ng, co-founder of non-profit Foodscape Collective, noting that current production and consumption systems have outstripped environmental holding capacities.

While some studies suggest that if the world went vegan today, more land would be used than certain omnivorous diets, generally plant-based diets have a lower environmental impact, Tan said.

“How much lower [the environmental impact is] depends on the context—the type of protein or plant, and how balanced the diet is,” she said. “The water footprint of beef is higher than that of nuts and fruits, which have higher water footprints than pork and poultry. Pulses and cereals have the lowest water footprints.”

Giving consumers easier access to cheaper meat-substitutes products is one way to increase the rate of plant-based diet adoption, Tan said. Alternative meat substitutes, such as Quorn’s selection of nuggets and patties, are often priced higher than meat products, which may deter consumers.

Eating insects—already popular in some parts of Southeast Asia—is another low-carbon meat alternative with the potential to be scaled up. 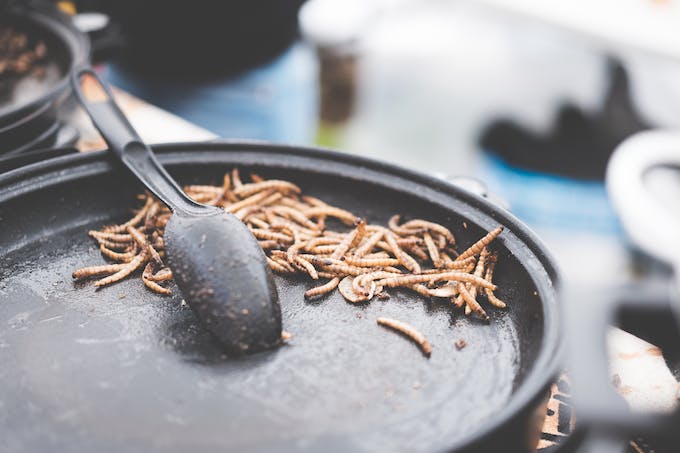 Though already prevalent in some parts of Southeast Asia, increasing protein intake from insects is a viable alternative. With higher nutritional value than meat and fish, insects are the food of the future. Image: Viktor Hanacek, Picjumbo

A 2017 study showed that insect farms could produce 75 per cent less carbon and use less than 50 per cent of water than chicken farms, already one of the least environmentally damaging forms of livestock farming.

Insectta is also looking into transforming black soldier fly larvae into food-grade products for humans, and farming crickets and mealworms.