A week after a UN report revealed Southeast Asia’s slow progress on the SDGs, government and business leaders came together at the 5th Singapore Dialogue on Sustainable World Resources to discuss how Asean can achieve green growth.

Indonesia is targeting economic growth of 5.6 per cent next year, but how can Southeast Asia’s largest economy grow so quickly without sacrificing the life-sustaining ecosystems on which much of the world depends?

The sustainable development balancing act was at the centre of discussions at the 5th Singapore Dialogue on Sustainable World Resources on Friday—the week after a report by the United Nations revealed that the region is failing to achieve two thirds of the Sustainable Development Goals, with the severe degradation Southeast Asia’s carbon-locking forests among the key concerns.

“It cannot be denied that Indonesian development is already on track [for 5.6 per cent growth by 2019],” Dr Bambang Brodjonegoro, the country’s Minister of National Development Planning said in his speech at the event titled Climate Action: Seeding Green Growth and Resilience in Asean. “But economic growth cannot be sustainable if we fail to maintain natural resources and environmental quality. We need to maintain the balance between economic growth, social stability, and good quality of environment and natural resources,” he said.

Indonesia’s dilemma reflects Asean’s struggle to grow while preserving its wealth of natural resources. The region is a major manufacturing hub, has the fastest growing consumer market, and makes up the seventh-largest economy in the world. It is also home to some of the world’s largest and most biodiverse forests and marine ecosystems, which are being lost at a faster rate than anywhere on the planet.

Economic growth cannot be sustainable if we fail to maintain natural resources and environmental quality.

Brodjonegoro noted that the quality of Indonesia’s environment has degraded markedly over the last three years, and to grow sustainably, Indonesia is using the concept of carrying capacity to manage the balance between urban, agricultural, and forested areas.

“It is time for us to consider the carrying capacity of the environment and natural resources to become an inseparable part of the process of sectoral and regional development planning,” he said.

For urban areas, carrying capacity is measured in terms of the amount of solid and liquid waste or air pollution that human activities produce, Brodjonegoro explained. 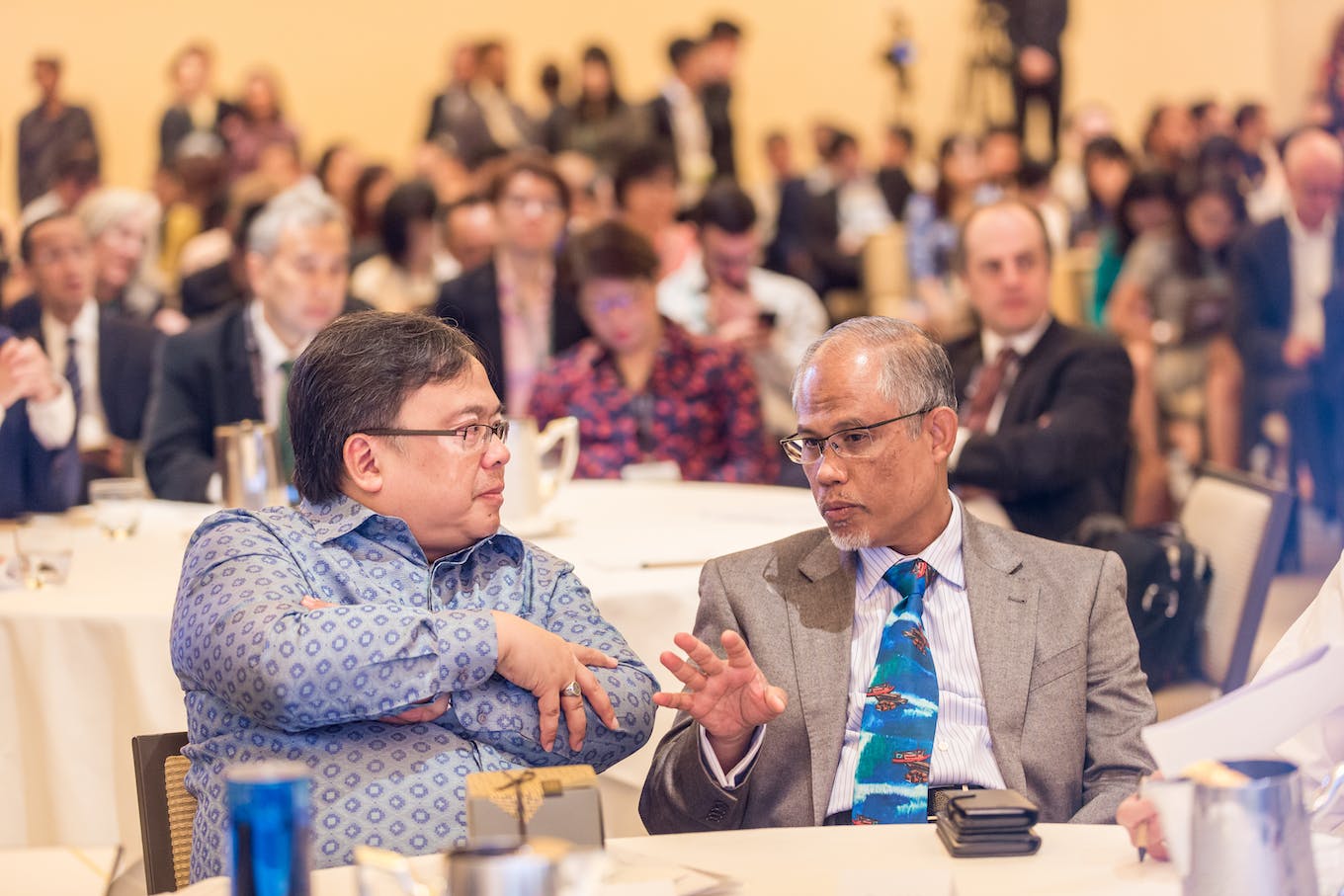 Brodjonegoro highlighted the Joko Widodo government’s efforts to protect the preserve the country’s forests, with a planned moratorium on further expansion of the 11.9 million hectares of oil palm plantations in the country.

“We encourage all the palm oil plantations to increase their productivity using existing lands,” he said, addressing an audience that included senior executives from major growers including Sime Darby, Golden Agri-Resources and Indofood Agri Resources.

An obstacle to greening growth is the idea that it comes with a cost, Brodjonegoro said during a dialogue with Simon Tay, chairman of the Singapore Institute of International Affairs (SIIA), the host organisation of the event.

But he said that Indonesia was open to new ways to build sustainability into its economy, such as the introduction of a carbon tax, which he noted Singapore will be putting in place next year. “The private sector cannot work alone in reducing greenhouse gases,” he said.

Masagos Zulkifli, Minister of Singapore’s Ministry of the Environment and Water Resources, pointed to the rise of green bonds as another driver for sustainable development in the region. “Last year the Monetary Authority of Singapore launched the Green Bond Grant Scheme to help raise the estimated US$3 trillion required in Asean for green investments by 2030,” he said.

Asean needs to move away from the mantra of “growing now, cleaning up later,” urged Masagos. He presented a vision of Singapore—which holds the chairmanship of the Asean block this year—as a car-lite society, a regional hub for the solar and water industries, and where “policies, partnerships and passion” were critical to sustainable development.

“Singapore enjoys the dividends of our early investment in green growth and environmental resilience,” said Masagos, adding that this investment had created a clean, safe and liveable country that was increasingly able to attract top talent from overseas, and in turn drive furher investment.

Prof Simon Tay added: “As Asean chair this year, Singapore can help bring changes that will assist climate action and sustainable development. As a major finance and trade hub too, our country can and should play a role to nudge and foster sustainable supply chains and green finance.”

Does Asean have a renewable future?

In a passionate speech, Philippine Senator Loren Legarda said that, as the world’s fifth most vulnerable country to climate change, there is no other recourse for the Philippines “but to usher in green growth and transform our economy towards a low carbon and climate-resilient path.”

I have advocated and ensured that our national budget is a climate budget.

Legarda, who holds the role of chair of the Philippine Senate Committee on Finance, outlined how policies can spur green, economic growth by budgeting for climate change adaptation and mitigation—but only with strong financial backing.

“Many, if not all, of our plans and strategies for climate action and green growth will remain as ideas if there is no appropriate budget to implement them. This is why, for three budget cycles in a row, I have advocated and ensured that our national budget is a climate budget.” 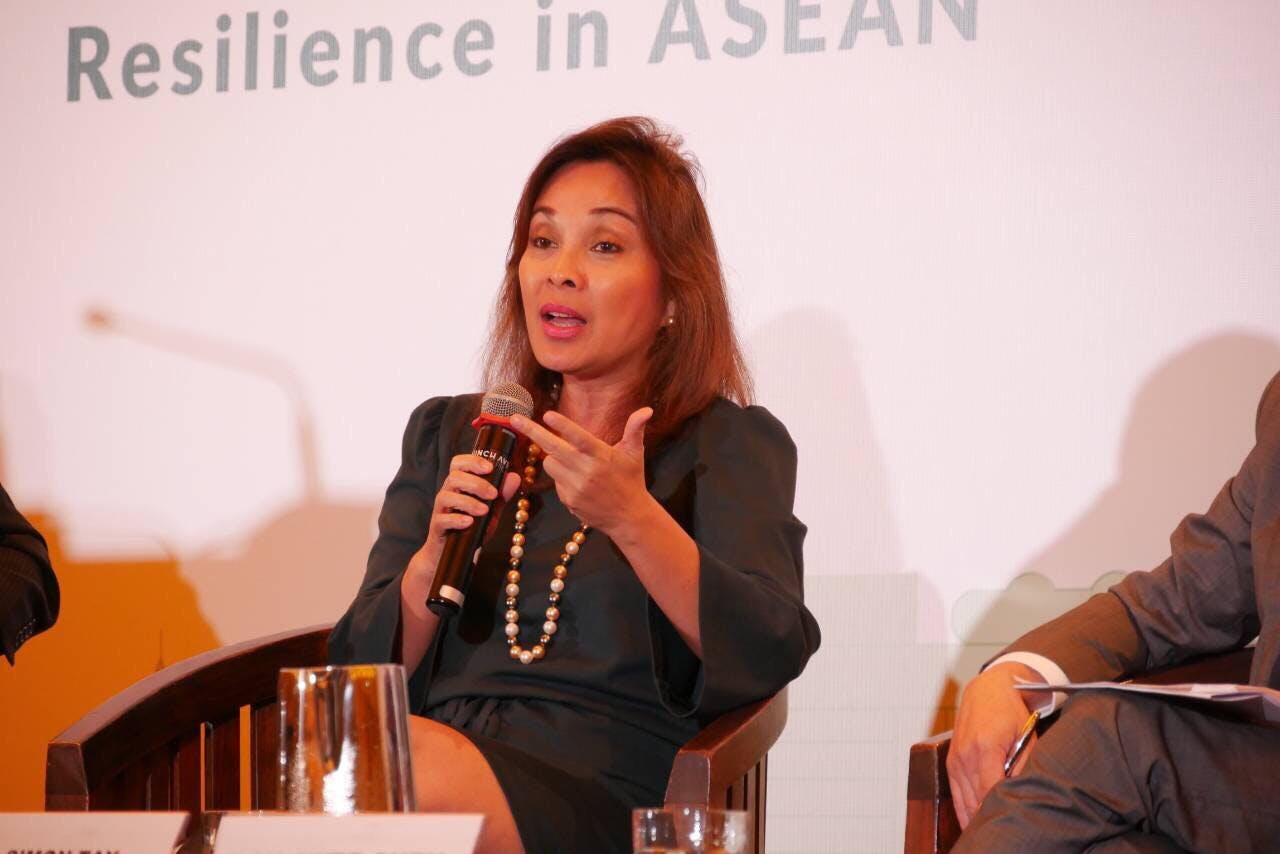 Loren Legarda said that if Asean countries share information and best practices, the region’s shift to renewable energy can be sped up. Image: Office of Senator Loren Legarda

She asserted that the region’s banks—which have come under scrutiny this year for their role in financing coal-fired power stations across the region—have a “critical role” to play to unlock more green investments to ensure a low-carbon and climate-resilient future for the region.

Legarda, who has pushed for the creation of a Philippine Green Bank explicitly for financing green projects, pointed to the Green Jobs Act as the first initiative of its kind to support industries in their transition to low-carbon sectors.

Local government units have a decisive role in implementing green finance projects, she added. “We abide by the principal that building resilience is local; therefore, in order to sustain green growth it must also be from the bottom-up.”

An exchange between senator Legarda and Goh Swee Chen, country chairperson for oil giant Shell that revealed the biggest challenge of all for green growth in Southeast Asia: the battle between fossil fuels and renewable energy.

Legarda said: “We welcome bold pronouncements from other countries like Singapore and Indonesia in phasing out coal, and personally, the Philippines must also consider fossil fuel as a thing of the past – I’m sorry if I’ve trodden on anybody’s toes.”

Swee said “there must be a smooth transition,” in response to a question from the audience on how to hasten the shift to renewables in Southeast Asia, where clean energy is still very much in its infancy.

Legarda countered by citing Costa Rica, France, and the United Kingdom as countries that had made the switch, and cities and states in the United States that have already committed to decarbonisation.

The green future that the event envisioned contrasts predictions made by the Asean Centre for Energy, which expects renewables to contribute only about 30 per cent of the region’s energy mix by 2040.

According to the International Energy Agency, coal will account for 40 per cent of all electricity generation in Southeast Asia by 2040, and the demand for oil in the region will grow more than 140 per cent over the same time period. Fossil fuels may be around longer than Legarda or many others would hope.

Despite differing views on what kind of energy will fuel Asean’s growth in the future, Singapore’s chairmanship of Asean provides a unifying theme for the region: resilience and innovation, Masagos said.

Brodjonegoro agreed. It will take “new innovation in policies that will lead Asean countries to achieve green growth,” he said.