Melaka City in southwestern Malaysia is known for its buildings and heritage that date back to its days as a Portuguese colony from the 16th century.

Already a tourism hotspot for both locals and foreigners, the growth in visitors accelerated after it was declared a UNESCO World Heritage site in 2008. The city registered 17 million visitors in 2018, almost 20 times the number of its residents. 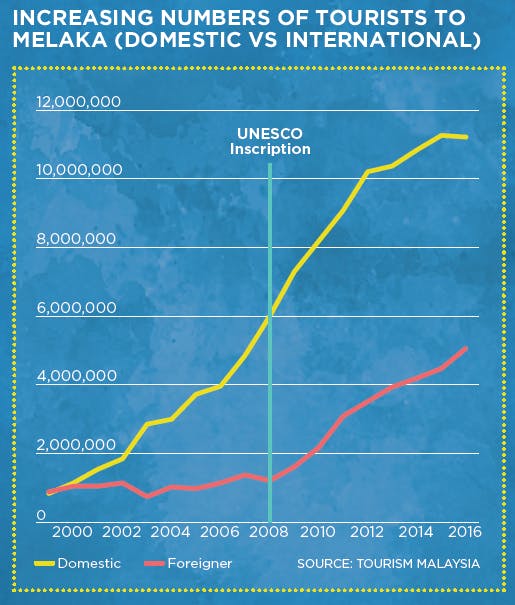 This prompted city officials to make a successful bid to be part of 100 Resilient Cities (100RC), a non-profit organisation set up by United States-based Rockefeller Foundation that provides assistance to cities to be resilient in the face of environmental, social and economic challenges.

On June 27, Melaka unveiled a broad resilience strategy to tackle some of its biggest environmental issues.

The city experiences high levels of traffic congestion due to a weak and unattractive public transport network unable to accommodate the travel demands of visitors, according to its Resilient Melaka roadmap produced in partnership with 100RC.

Sixty per cent of carbon emissions in Melaka are caused by road transport, affecting people’s health and the environment.

Saurabh Gaidhani, associate director of 100RC Asia Pacific, told Eco-Business that city wants to decrease the number of private vehicles on the road by ensuring everyone has access to public transportation.

This could be done through the construction of a bus rapid transit (BRT) system and the development of a water taxi service to ease congestion in the car-dominated city, as well as the creation of alternative routes to access the city.

“This will reduce congestion and improve air and noise pollution. Easier access around the city will also help create new business opportunities to diversify the tourism sector,” said Gaidhani, one of the consultants who put together the roadmap.

Melaka needs to ensure that it does not become too reliant on tourism to drive its economy but, rather, have a diverse range of industries and opportunities available to its residents.

Public spaces will also have wider cycling and pedestrian lanes as an alternative for commuters.

Flash floods, which hit the city early this month, are not new to the state due to its ageing drainage systems. Shallow drainage pipes lack the capacity to cope with heavy rain and this often results in surface flooding. The floods are worsened by the influx of visitors, whose litter clog the drains, which are not always covered.

The Melaka government is developing a flood mitigation plan, which aims to deepen and widen rivers, enlarge reservoirs and provide additional sluice gates, which control the flow of water in water systems, the report noted.

The city’s water supply has also come under pressure with increasing tourist numbers.

Melaka currently imports its water from outside the state because each resident uses up to 230 litres daily, higher than the national average of 180 litres.

City officials plan to enhance Melaka’s Watershed Plan, which will integrate all water resources in the city instead of just relying on the Durian Tunggal Dam, the main water source for the state.

Rainwater harvesting will also be implemented, with the water stored for uses like irrigation, laundry, flushing, and cleaning. Hotels, as major consumers of water, will also be engaged to reduce water consumption as part of their licensing renewal process.

The city, which has no material sorting facilities, also faces a growing waste problem. All waste is sent to landfills, in which will soon be at capacity. Waste removal services in public spaces are poor, partly due to the difficulty in accessing narrow roads.

With the help of industry leaders in this week’s 100 RC summit in Rotterdam in the Netherlands,  city officials plan to tackle how Melaka can adopt a circular approach to manage and reuse its waste. Meanwhile, the city plans to address its litter problem by reaching out to tourists through an awareness campaign to recycle and dispose of waste responsibly.

Waste bins will be added at locations like shopping precincts, event venues, river boats, cafes and restaurants, which experience high pedestrian flow, according to the 46-page roadmap.

“Melaka is a small city whose infrastructure is challenged by increasing numbers of visitors and its historic landmarks need to be preserved and protected.  Melaka also needs to ensure that it does not become too reliant on tourism to drive its economy but, rather, have a diverse range of industries and opportunities available to its residents.  Sustainability and balance will be key to ensuring a secure and resilient future for Melaka,” said 100 RC’s Gaidhani.