ADB not yet ready to quit coal

At the Asia Clean Energy Forum in Manila yesterday, Asian Development Bank president Takehiko Nakao said it could not rule out funding coal power as there is 'no other option' for some countries in Asia. Protesters outside the event called on ADB to draw up a time-bound phase-out plan for coal financing.

The Asian Development Bank (ADB) has plans to stop funding coal-fired power plants—except in selected countries where the bank considers the alternatives to be limited.

“I don’t know whether we will totally dismiss the possibility of coal projects, because in some countries there’s no access to other options,” the development bank’s president Takehiko Nakao said at ADB’s week-long Asia Clean Energy Forum in Manila yesterday.

Nakao’s comments came in response to a question from the audience on whether the bank would set a date for when it would stop funding coal, which is the single biggest contributor to man-made greenhouse gas emissions.

Nine months ago, ADB said that there would be no place for “dirty energy” in its new climate finance strategy.

Unveiled in July last year, ADB’s updated climate strategy promises up to US$80 billion in climate adaptation and mitigation spending primarily to support renewable energy and energy efficiency projects, and highlights the bank’s shift of focus from poverty reduction to creating climate resilient and inclusive growth for the region.

The ADB president said that its new energy policy was being reviewed in line with the Paris Agreement and the United Nations Sustainable Development Goals, and will be released by the end of 2020.

“There have been many changes [since 2009] so we should adjust our policies to address these new developments. It’s too early to tell what the essence of our new policy will be, but lending to coal will be a key issue [in this review],” Nakao told a 1,200 strong audience from 70 countries, representing the private sector, government, and civil society.

I don’t know whether we will totally dismiss the possibility of coal projects because in some countries there’s no access to other options.

“Like ADB, we only support coal in countries where there is no alternative. In certain countries, coal is still subsidised. Countries with huge energy demands are not ready yet [to let go of coal],” David Morgado, senior energy policy specialist of AIIB, said in a plenary session on trends in clean energy finance.

On the sidelines of the forum, Morgado told Eco-Business that part of AIIB’s energy strategy is to be open to coal funding.

“If there is no other option and the best available technology can be used [to curb coal emissions reduction], coal could be considered,” Morgado told Eco-Business.

“This is not to say that the bank has financed any coal. There has not been any particular need [to do so] but the door is open,” he said.

Morgado cited Myanmar as a country that focuses on coal in its energy mix even though it is rich in renewable energy resources. But the Southeast Asian country lacks the companies to deploy renewables and the government does not give incentives such as tax exemptions for carbon credits generated from the use of renewable energy sources.

ADB last approved a coal power project six years ago to convert Pakistan’s Jamshoro plant to run on coal instead of heavy fuel oil. But last year, the bank declared a shift to clean energy, backing US$2 billion worth of investment into renewable energy and energy efficiency, to meet a US$3 billion target for 2020.

During the forum, the bank announced a partnership with the United States Agency for International Development (USAID) to mobilise US$7 billion worth of investment for energy projects in Asia.

Outside the bank’s headquarters yesterday, civil society organisations staged a protest against what they called ADB’s “clean energy myth,” demanding that the bank set a “time-bound phase-out plan for coal.”

Annabel Perreras, advocacy coordinator of Asian-led network of civil society groups NGO Forum on ADB, said in a statement that the development bank should align with its claims of supporting low-carbon energy.

“ADB’s deafening silence on retiring coal-fired power plants it had earlier funded in the region and banning financing for fossil fuels speaks in stark contrast with this commitment.” 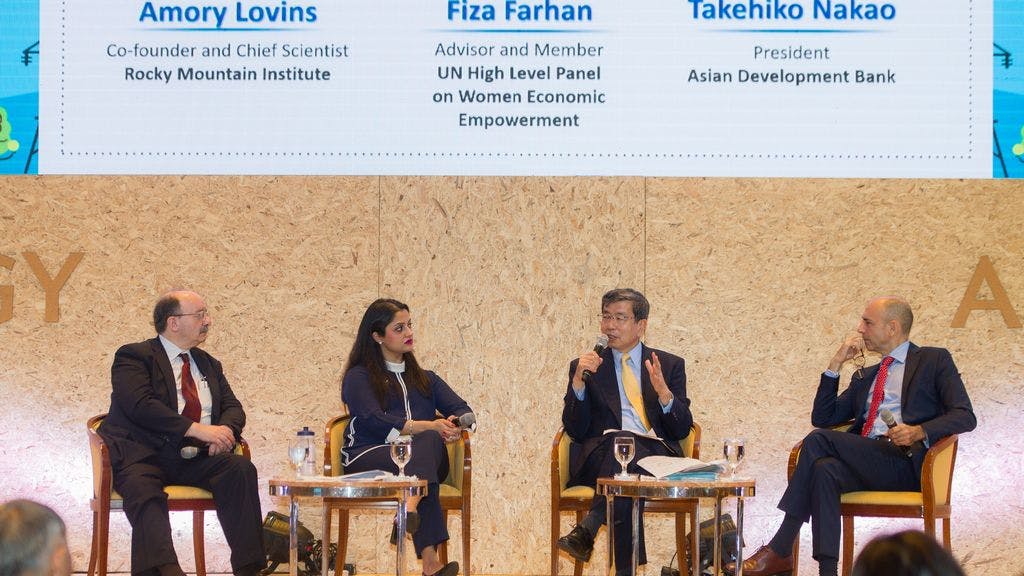