We are eating a credit card's worth of plastic every week

A campaign by the WWF Singapore has revealed that the average person consumes approximately 5g of plastic every week. The NGO is calling on governments and businesses around the world to forge a global treaty to tackle plastic pollution.

People are eating approximately 5 grams of plastic every week, the equivalent weight of a credit card, according to a new global study by World Wide Fund for Nature (WWF) Singapore.

Invisible to the naked eye, microplastics do not biodegrade and persist in the marine environment. Microplastics are tiny particles that are directly released into the environment, through microbeads found in personal care products and the washing of polyester fabrics. In addition, they can also be derived from larger pieces of marine trash, such as plastic bags, that break down in the ocean. 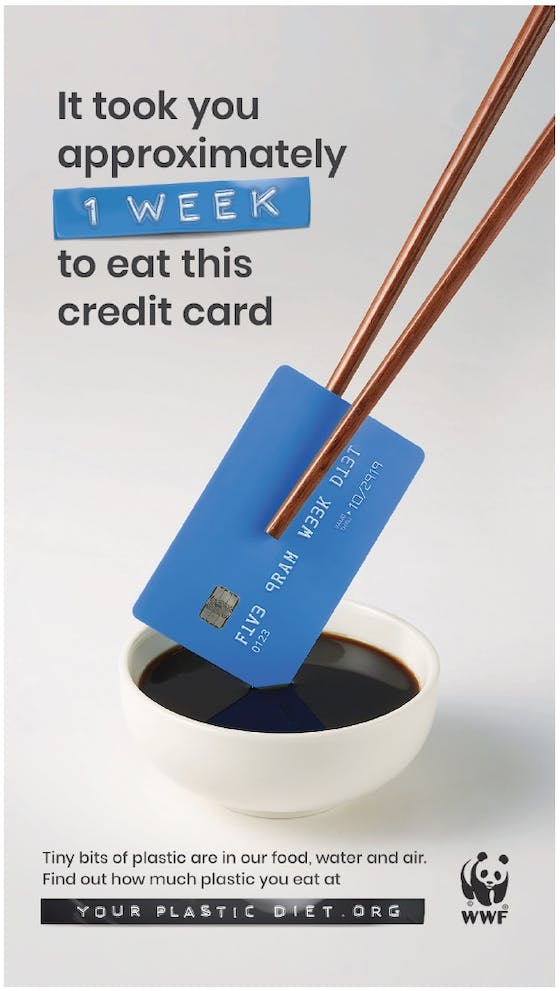 People are eating the equivalent weight of a credit card every week, according to a new study by WWF Singapore. Image: WWF SIngapore.

At present, not much is understood about how ingesting plastic can affect human health. However, preliminary studies suggest that these substances cannot be broken down by the human body.

“In order to tackle the plastic crisis, we need urgent action at the government, business and consumer levels, and a global treaty with global targets to address plastic pollution,” said Marco Lambertini, WWF International’s director general.

A global petition, launched by WWF in February this year, to push for a legally binding treaty to address plastic pollution through international cooperation has garnered over 650,000 signatures. Proposed measures include setting quantifiable national targets to reduce and manage plastic waste, legislating extended producer responsibility to hold businesses accountable for the plastics they produce and supporting emerging research on the health effects of plastics and microplastics.

WWF’s campaign website, yourplasticdiet.org, reveals how much microplastics is in your food and how you can participate in the fight against plastic pollution.