What did you eat for breakfast today? For the time-poor worker it can be hard to grab a bite before heading out the door, even if your fridge is well stocked. We know that somewhere between a quarter and a third of all the food produced globally never gets eaten, worth somewhere in the region of US$750 billion. Clearly this is an issue that goes far beyond getting ready a little quicker in the morning.

There is enough food on the planet to feed everyone, but there are 795 million people who won’t have enough to eat today, or tomorrow, or the day after that. This figure is heavily weighted towards the Global South, where regions like Sub-Saharan Africa are amongst the world’s poorest and most food insecure places.

Hunger and major food loss are the defining characteristics of our global food system, and we’re set to experience far worse as the world is projected to feed more than nine billion people, by 2050, in a climate changing, warmer world with lower yields.

Food security is a prerequisite for a sustainable future. It is also a huge market opportunity for business leaders ready to step up to the challenge. In this year’s Global Opportunity Report, we took the global food system as a major systemic risk and crowd-sourced the development of three new business opportunities – innovating our diets, making our food last longer, and making farming smart.

Together, they present some of the most exciting and practical applications we have to feed the world fairly and sustainably.

The world needs a new diet, one that focuses on localized production and a more varied source of proteins. Meat and animal-product consumption accounts for more carbon emissions than the entire transport sector and uses 46 percent of all global freshwater, and as more people enter into the global, meat-eating middle class these numbers will keep rising.

New dietary guidelines drawn up by China’s health ministry earlier this year hope to cut national meat consumption by as much as half, which is aligned with our own survey data showing that China is one of the most likely countries to pursue new market opportunities with regards to sustainable diets.

So what does a protein-rich, meat-free plate of food look like? Sustainia Award finalists Impossible Foods believe it can look and taste just like the real deal, if their entirely plant-based beef burger is anything to go by. The people behind this kitchen marvel say that choosing an Impossible Burger over a regular quarter pounder will liberate 75 square feet of land and save water equivalent to a ten minute shower.

Or what about cricket tortilla chips? The founders of Six Foods have been milling crickets into flour and using them in popular snacks which are more sustainable and more nutritious than their regular counterparts. Presented in this way, many squeamish consumers will be quicker to adapt to eating insects just as readily as we eat other forms of plant and animal life.

Dealing with our waste

We can feed an additional three billion people if we stop wasting food. In fact, the equivalent to one in every four calories intended for consumption never gets eaten. Food loss mainly occurs at two ends of the food system – at the point of harvest and production, and at the point of sale. And there are already front-running businesses providing solutions for both.

The world needs a new diet, one that focuses on localized production and a more varied source of proteins.

It is estimated that as much as 40 percent of total food production in developing economies is lost before it even reaches the market, due to poor storage and transport. Cold Hubs responds to this need by installing solar-powered cold rooms in developing countries.

This innovation is part of a ‘clean cold revolution’ that creates accessible and affordable refrigeration where it is lacking, and gives more stability to smallholder famers who suffer the immediate consequences of post-harvest lost. Just a one percent reduction in post-harvest loss in Sub-Saharan Africa equates to US$40 million in savings.

Too Good To Go tackles food waste at the other end of the system, with an app that makes surplus restaurant food available for collection at the end of service. It is designed to reduce food waste and redistribute food to low-income communities thanks to its affordable prices.

Our survey showed that reducing food waste is the most popular food opportunity in the MENA region, and is particularly appealing to young leaders. This would certainly help explain the popularity of applications like Two Good To Go, as they open up more bases across Europe.

Getting smart about farming

The biggest opportunity driver, by far, is smart farming. Business leaders around the world feel they have the economic and technological capacity, and the political will power to advance this opportunity. So what makes a farmer smarter?

The recent development and dissemination of mobile technology, at an affordable price, has given large- and small-scale farmer more precise tools to produce more with less. Moreover, smart farming can be applied in any context as it presents benefits for both developed and developing economies.

PrecisionHawk, for example, uses lightweight drones to optimize land use efficiency with global applications, whilst CropX distributes wireless sensors to monitor soil and prevent drought in the US, and SunCulture’s solar-powered drip irrigation system is making it easier for farmers in Kenya to grow higher-value yields. 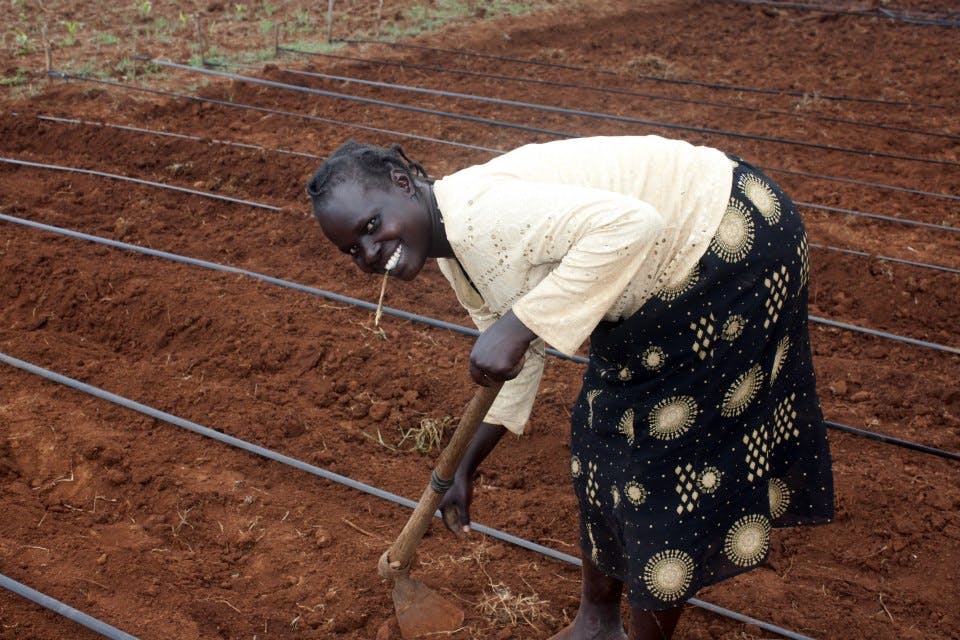 A farmer in Kenya with SunCulture’s irrigation system. Image: Sustainia

These precision farming tools and services present a major market growth opportunity, as estimates say that it will be worth in the region of $4.55 billion by 2020.

As we mark World Food Day this year, which addresses the twinned theme of food security in a climate challenged world, it’s refreshing to see that there are bountiful solutions and innovations already underway. For businesses with the right kind of opportunity mindset, taking a bite out of the food systems of our future is a tasty prospect for people, planet and profit.

Katie McCrory is the global communications lead for Sustainia. This article was written exclusively for Eco-Business.