Analysis of data from a list of coal companies worldwide has exposed the extent of international finance for Chinese coal companies.

At President Biden’s climate summit in April all parties agreed that everyone must pull together to mitigate climate change. At a national level, China seems to be playing its part. Its State Council introduced a plan for responding to climate change in 2007 and in 2020, President Xi announced that China will be carbon neutral by 2060. During the recent summit, Xi even pledged China’s coal consumption will peak in 2025.

But China’s booming coal industry runs against the grain. Burning coal is still the largest source of global CO2 and is responsible for about one-third of the temperature increase so far. Coal accounts for about 60 per cent of China’s current electricity consumption, and with over 1,000 gigawatts (GW), China operates half of the world’s coal-fired power plants. In 2020, the country commissioned another 38.4 GW of coal-fired capacity. A further 246.8 GW is either planned or under construction, representing 49 per cent of global coal-fired power plants under development.

One-tenth of the money invested in the Chinese coal sector in the last two years has come from abroad.

There is a common belief that the west is unable to change anything in China and has nothing to do with the direction of China’s energy production. That is wrong. It is fairly well known that China is the EU’s largest trading partner and that many of the goods sold in Europe are produced with Chinese coal power. Less obvious are the global financial flows: even though China’s coal companies are mainly domestically funded, foreign financiers also support the country’s coal industry.

In fact, over 460 international financial institutions have financed Chinese companies listed on the Global Coal Exit List (GCEL), a database compiled by German non-profit environmental organisation Urgewald. The GCEL currently lists 935 companies active in the coal sector. So everyone is pulling together, but unfortunately in the wrong direction.

One-tenth of the money invested in the Chinese coal sector in the last two years has come from abroad with 48 international banks providing a total of US$21.7 billion. The lion’s share of this sum was provided by issuing shares and bonds.

The UK and the US are by far the largest foreign financiers. English banks such as HSBC and Standard Chartered have lent $5 billion and US banks such as JPMorgan Chase and Citigroup follow closely behind with $4.9 billion.

Banks from Japan, Switzerland and France have also sunk over $2 billion each into the Chinese coal sector. 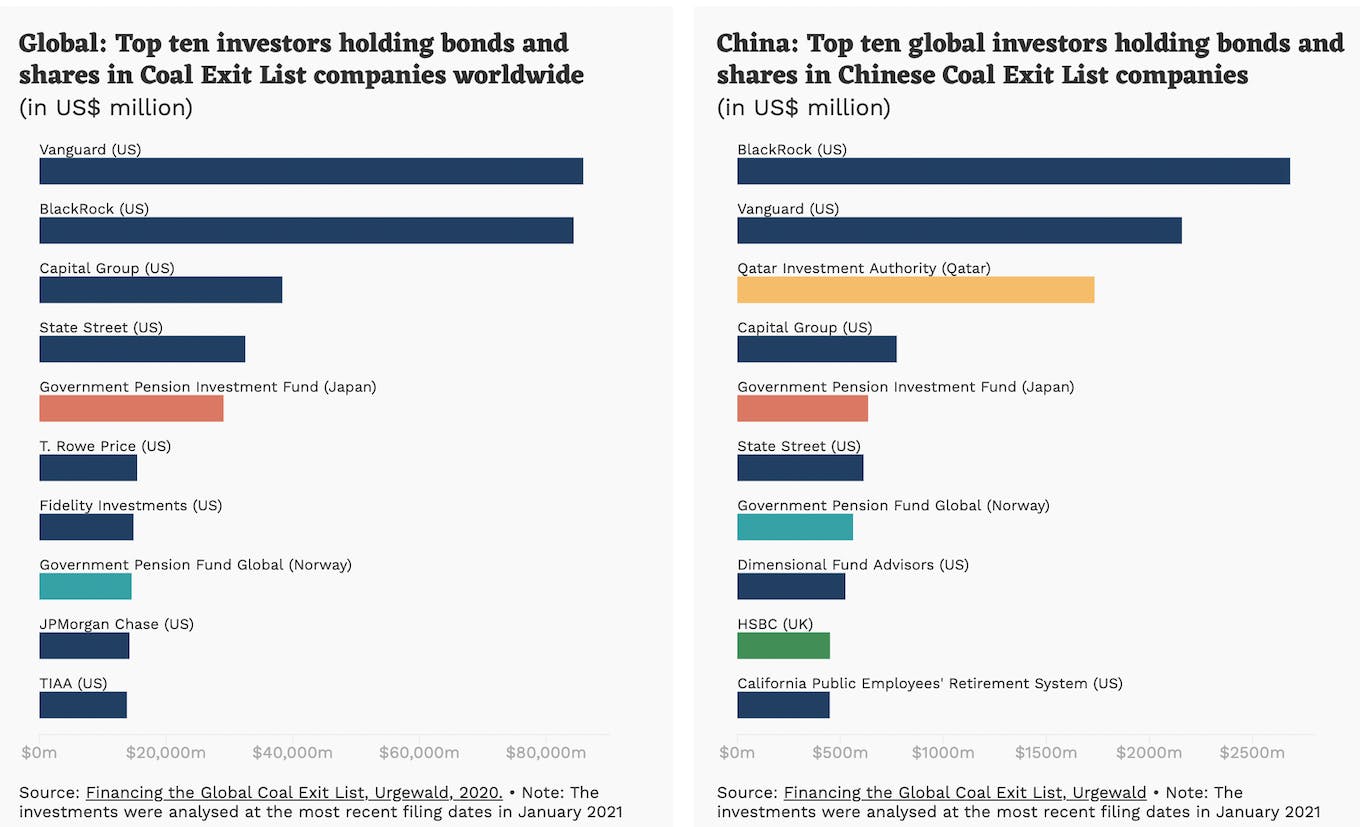 According to Urgewald research, China’s coal giant China Energy is among the biggest recipients of foreign investment ($1.8 billion). The company has about 160 GW of installed coal capacity and produces around 510 million tonnes of coal. China Energy is planning new coal mines and developing new coal-fired power plants with a total capacity of 51 GW, not only in China. Two new power stations in Indonesia have just been brought online and the 600 MW Sumsel 1, is under construction.

Another major recipient is state-owned power provider China Huaneng with $1.2 billion. The company has installed over 100 GW of coal-fired capacity and plans to add another 32 GW.

As of January 2021, 439 investors have invested shares and bonds worth $19.6 billion in Chinese GCEL companies, surpassing Chinese domestic financial investments by $2 billion.

The largest global companies investing in Chinese coal companies are US firms BlackRock, with $2.7 billion, and Vanguard, with $2.2 billion. In third place is the Qatar Investment Authority, with $1.7 billion. US investors were in an overall lead with a total of $11.5 billion in bonds and equities of Chinese GCEL companies.

Far behind are investors from the UK, such as HSBC and Schroders, with $1.3 billion. Other large European investors include the Norwegian Pension Fund with $562 million, Swiss investor Pictet with $219 million and UBS with $192 million. 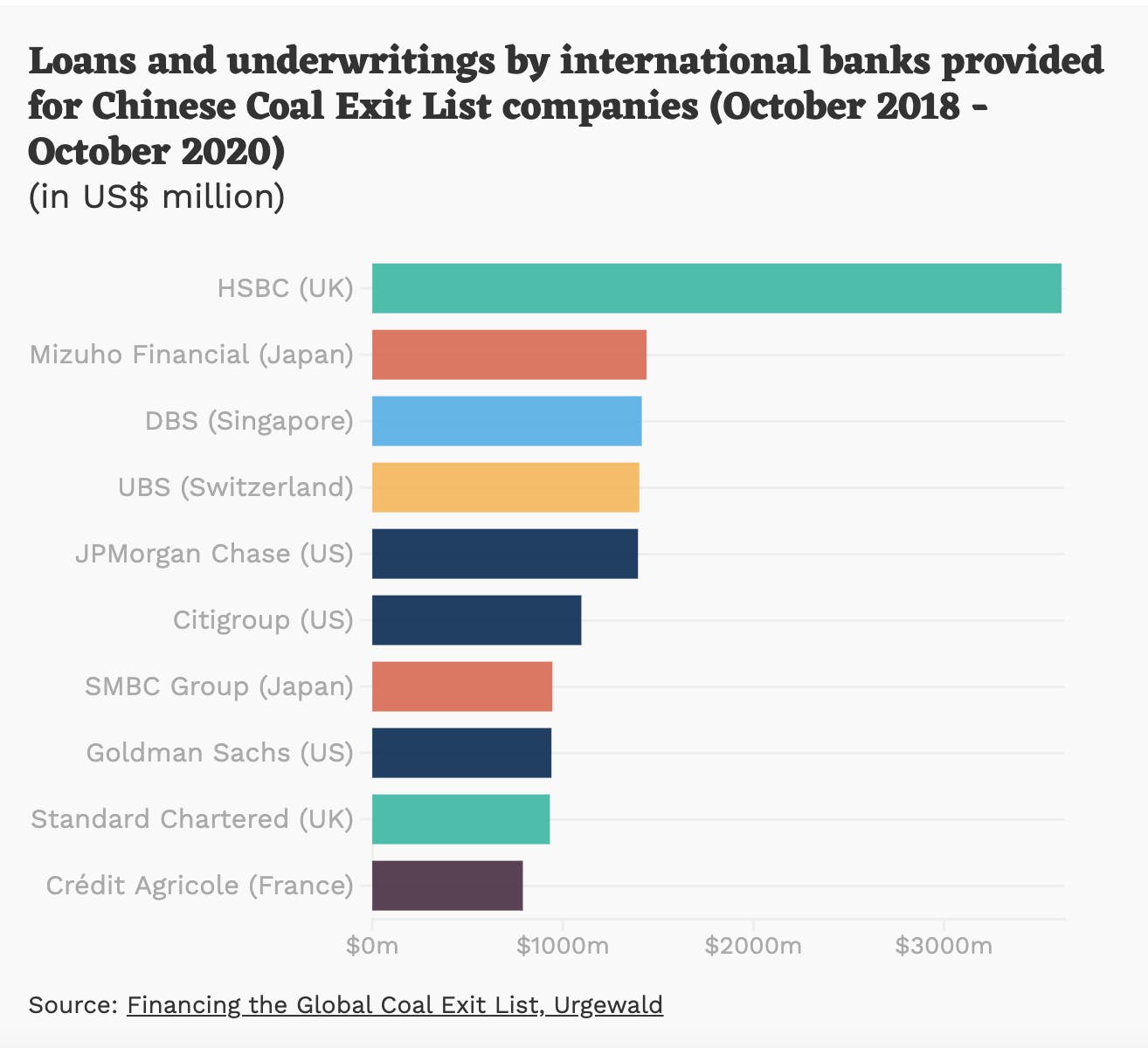 Most citizens are not aware that their pension funds could be helping to finance the destruction of the planet. For example, the world’s largest pool of retirement savings, the Japanese Government Pension Investment Fund (GPIF), has investments of $635 million in China’s GCEL companies, making it their fifth-biggest investor.

Following closely is the largest state pension fund in Europe, the Norwegian Government Pension Fund (GPFG). That fund started its coal divestment in 2014, also due to Urgewald’s campaigns, and tightened its guidelines in 2019. Nevertheless, coal-fired power plant developers in particular are falling through the cracks, making it still the seventh-largest investor in China’s biggest CO2 emitters.

The largest Dutch pension funds are also investing in Chinese coal, including government and education employee fund ABP and care sector fund PZFW. Despite pressure on these institutions increasing in recent years, ABP is still ranked 20th among investors in Chinese GCEL companies, with $128 million, and PZFW is 38th, with $102 million.

There have been announcements to protect the environment and climate but China continues to build coal-fired power plants, some of which will not begin operation until 2025 and will continue to emit carbon dioxide throughout an average operating life of 40 years.

Four of the five largest coal-fired power plant developers in the world are Chinese companies, and together they have 121 GW under construction and in planning: China Energy, China Datang, China Huaneng and China Huadian.

This is no longer about domestic power supply. China is now the world’s largest developer of coal-fired power plants abroad. In countries such as Bangladesh and Pakistan, China is the main driver of the establishment and expansion of the coal industry. In turn, China’s internationally operating coal companies are financed from all over the globe.

China is sanctioned, China is financed: the US and Europe stand out in both cases. The historically largest CO2 emitters are thus financing the largest current climate polluter. And this not only concerns the Chinese coal industry: as Urgewald’s research shows, investments are also being made in China’s oil and gas sector.

If we are to stand any chance of limiting global warming to 1.5C and protecting the planet’s diversity, the expansion of the fossil fuel industry must cease. Further financing of fossil companies, and above all the coal industry, is the first step towards this.