After what could be the smallest win for the environment in the history of policymaking, we are left wondering: what will it take for Singapore to introduce serious legislation to combat plastic pollution?

Could this be the smallest win ever for the environment?

A goody bag handed out to the public once a year for Singapore’s National Day Parade (NDP) is to be made slightly more sustainable, the island nation’s defence minister said in parliament on Monday.

In a speech that’s unlikely to get many environmentalists’ hearts racing, defence minister Dr Ng Eng Hen said that next year’s National Day Parade will use paper instead of plastic Bento boxes to serve meals for spectators, and each fun pack will contain one larger plastic bottle of water instead of two plastic bottles.

National Day celebrations do generate a lot of waste. But as policy ideas to combat plastic pollution go, this was not exactly legislative cartwheels.

It’s about as ambitious as a public awareness campaign unveiled four months ago by Singapore Environment Council that asked Singaporeans—who use a mind-boggling 13 plastic bags daily—to use one less piece of plastic a day.

To fill the fun pack with reuseable items with minimal packaging, as suggested by MP Louis Ng in a question on what the government was doing to reduce single-use plastic on National Day, was “not feasible,” the minister told parliament.

But the NDP executive committee would set up “collection points” (bins?) to encourage spectators to return unused items from the fun pack, he said.

“The general direction is to use reusables, when available and cost-effective,” the minister said.

Environmentalist turned politician Louis Ng tabled the idea of eliminating single-use plastic from the public sector, and introducing a selective charge on plastic bags in parliament two months ago — suggestions that were not taken up.

Plastic pollution will be tackled—as it always has been in Singapore (with limited success)—with public education campaigns and not legislation, Ng was told in Parliament. 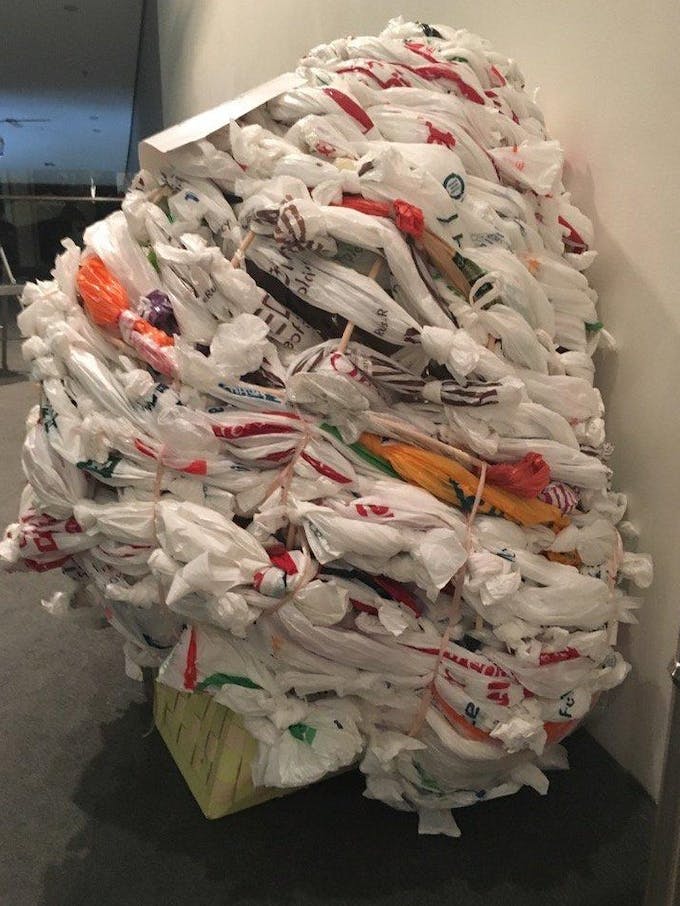 The amount of plastic bags consumed by the average Singaporean in a year. Image: Eco-Business

To date, Singapore has not introduced legislation on an issue now accepted by much of the world to be an environmental crisis that is getting out of control.

What is Singapore waiting for?

As more whales wash up on beaches around Southeast Asia with their stomachs filled with plastic, as one did in neighbouring Indonesia today, the pressure builds on the city-state to do more than ask companies to report how much plastic they use—which they won’t have to do until 2020.

The main reason for Singapore’s inaction could be because plastic pollution is not seen as a problem by the powers that be.

This is because most the 763,400 tonnes of plastic produced last year—94 per cent of it, in fact—is conveniently disposed of in incinerators and the ash dumped in a purpose built trash island just off the coast.

Out of sight, out of mind.

But the longer Singapore declines to take serious measures to reduce plastic consumption, the bigger the conspiracy theories get as to why the country is doing so little.

One is that pro-business Singapore does not want to upset the companies that make the stuff. Petrochemicals giants Shell and ExxonMobil have been in Singapore since before she was even a country—208 years of history between them.

Another is that Singapore’s incinerators rely on the high calorific value of plastic to burn trash more efficiently.

Another theory, according to a source who works at one of the plants, is that Singapore counts on high volumes of plastic waste to offset the high cost of the incinerators, since revenue is generated from fees collected from waste brought to the plants.

But the most likely reason is the political cost of a plastic tax—the uproar that imposing even a small charge on plastic items would stir among a cost-conscious public.

The big supermarkets have tried to introduce a plastic bag charge before, and are now dead set against the idea for fear of angering their customers. So are Australian supermarkets after a spat of “bag rage” in July prompted retailers to temporarily waive a 15 cents charge for a plastic bag.

Even young Singaporeans bristle against measures taken to wean them off plastic, as a recent backlash against a straw ban on a university campus has shown.

Many Singaporeans feel that they are entitled to free plastic bags. Which explains the reluctance to restrict plastic, despite ever louder calls from increasingly vocal (by Singapore standards) green groups to do more than politely ask the citizenry not to use obscene amounts of the stuff.

But Singapore has not historically been shy of making bold policy decisions—even if that means upsetting a few people.

Singapore makes driving a car heinously expensive to reduce the number of vehicles on the road, for instance.

It has introduced a carbon tax, albeit a small one.

Why can’t it do something similar about plastic, which barely puts a dent in people’s wallets?

This year, the government declared Year of Climate Action, and encouraged citizens and businesses to do their bit to combat climate change.

We can only hope that 2019 will be the year that Singapore takes real action on plastic.