National University of Singapore's ban on plastic straws on campus has been met with heated opposition from some students. But supporters of the ban have responded with a way to promote eco-consciousness among convenience-minded young Singaporeans.

A move by Singapore’s biggest university to ban plastic straws has met with angry opposition from some students. 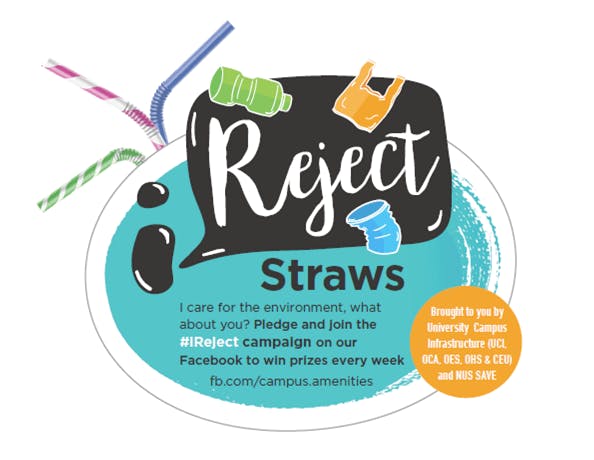 The iReject initiative was launched by the National University of Singapore (NUS) mid-October to curb the use of plastic straws in food and beverage outlets on the campus of 37,000 students. Paper straws are given out upon request instead.

The ban, which followed a pilot phase in August, has taken effect in drink stalls at canteens, food courts and selected outlets, and will be rolled out across the university over the coming weeks.

The move has been been opposed by some students who say it is difficult to drink a beverage without a straw. Some have griped that they were not sufficiently prepared for life without straws, and the ban came as a shock. Singapore has a particularly high disposable plastic use rate, with 5.6 million Singapore residents consuming 73 million plastic straws a year.

One student claimed to be so irritated by the campaign that they purchased 1,000 plastic straws for $10 and dumped them by a rubbish bin. On the university’s anonymous confessions website NUSWhispers, they wrote that plastic pollution is caused by improper collection and disposal of waste, not by people producing and using plastic items.

Another “angsty” student suspected that the move was not motived by environmental consciousness, but by companies that want to scrimp on cost. Complaining that they had been “greatly inconvenienced”, the student said they needed straws because they have sensitive teeth. They added that the ban on straws was pointless without also banning the plastic seals used to cover drinking cups.

A reaction campaign against iReject, called iAccept, has emerged on ephemeral messaging platform Instagram Stories, with students posting images and videos of themselves enjoying using plastic straws after the ban was introduced.

This blanket ban on straws is so stupid. The big players don’t care about saving the environment. They only care about saving face and costs. Yes, I am angsty, I’ve been greatly inconvenienced. I have super sensitive front teeth so I need straws.

Some students have started bulk-buying straws to use in restaurants and coffee shops that do not serve them. In an anonymous message shared with Eco-Business, one student said that forcing a blanket ban is backfiring, as “unconverted” students are rebelling against the idea. “Those who aren’t complaining are ok with the whole no plastics thing. But those who don’t understand [the reason for the ban], hate the movement even more,” they said. 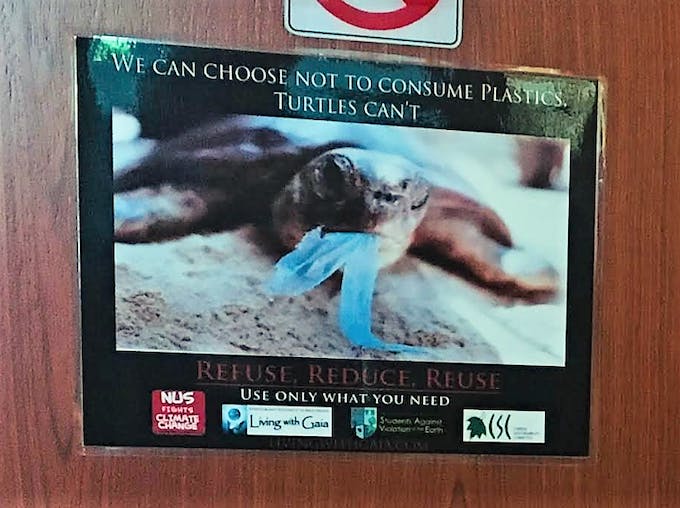 Poster encouraging students to avoid plastic in Spinelli coffee shop, University Hall. The poster reads: “We can choose not to consume plastics. Turtles can’t. Use only what you need.” Image: Eco-Business

According to sources close to the university, some campus retailers are also unhappy with the ban, as they were not given sufficient warning before it came into effect. NUS retailers include multinationals as well as local operators including Subway, Pizza Hut, Starbucks, Spinelli and food courts Flavours & UTown and Fine Food.

NUS’ Students Union has posted a notice on Facebook acknowledging that “proper consultation and early communications” may have prevented the outcry. The university has also set up a taskforce to explore ways to improve the campaign.

But iReject is not without supporters. Joanna Coleman, a lecturer at the Department of Biological Sciences, said opposition to the ban came from a “vocal minority”. She said that momentum against plastic over-use was building, and will “roll right over the naysayers soon enough.”

One student Eco-Business interviewed today said she had “accepted” the ban, and worked around it by cutting a hole in the plastic seal covering her drink, or by choosing a drink without a seal.

Another student wondered if banning straws—which she noted are unnecessary for most people besides the disabled—causes so much fuss, what hope is there for reducing other types of plastic? A proposal to charge for plastic bags and ban single-use plastic, measures that are soon to be introduced in Malaysia, was shot down in parliament last month. 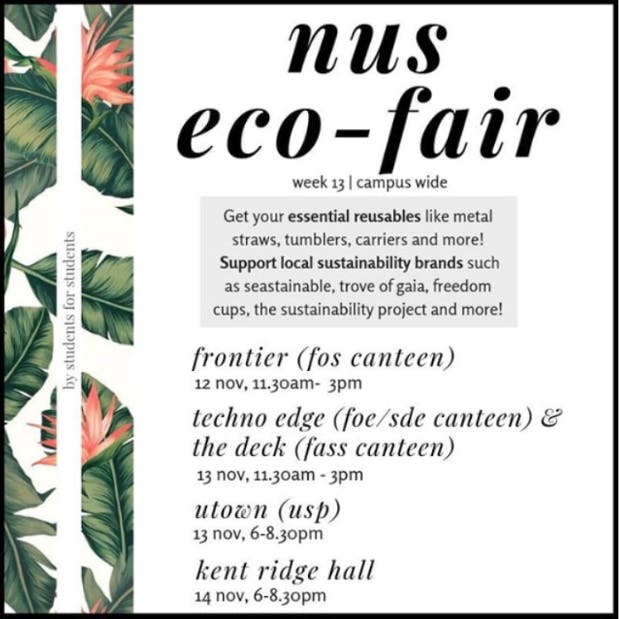 A flyer for NUS’ eco-fair

In response to the iReject backlash, environmentally conscious students are staging an eco fair this week to encourage the use of reusables such as metal straws and support local sustainable lifestyle brands Seastainable and Trove of Gaia.

Banning straws has become a popular way for governments and businesses to respond to plastic pollution, an environmental problem that has entered the public consciousness over the last 18 months, popularised by a viral video of a sea turtle having a straw removed from its nose.

Even in convenience-minded Singapore, food and beverage companies have started to withdraw straws from their premises, risking the ire of their customers. KFC was the first fast food chain to remove plastic straws and lids from its 84 restaurants in June, a move that will save 17.8 metric tonnes of single-use plastic a year. KFC’s initiative prompted complaints from customers, particularly those wearing lipstick or braces, who went to nearby hawker centres to pick up straws to use in KFC.

Ikea, Millennium Hotels and online delivery brands Deliveroo and Food Panda have also taken measures to reduce their plastic footprint. Local green group Zero Waste SG, which has long campaigned for the introduction of legislation to reduce Singapore’s high plastic use, recently started to rate retailers on their plastic reduction strategies. According to a study of 100 F&B outlets launched in late October, 83 rated poorly for their efforts to reduce single-use plastic.

“Some of the retailers we’ve approached mentioned they are hesitant to do more [to reduce plastics usage] because they are wary of customers’ feedback,” Hailin Pek, manager of Zero Waste SG told Eco-Business.