Environmentalist turned politician Louis Ng is to urge parliament to cut use of single-use plastic in the public sector and introduce a "discerning, selective" charge on plastic bags in the city-state.

The problem of plastic pollution is to be raised in Singapore’s parliament next week, when member of parliament Louis Ng will call on the government to take tougher measures to curb the small island nation’s huge plastic waste burden.

In a speech to parliament on Monday, Ng, MP for Nee Soon and the founder of animal welfare group Animal Concerns Research & Education Society, will be calling on the government to tackle plastic waste by cutting single-use plastic use in the public sector and introducing a “discerning and selective” charge on plastic bags.

It really is time to end this. Our excessive use of single-use plastics is killing this planet. It is a danger to the health of our ecosystems and our own health.

Singapore’s proposed plastic bag charge, Ng said in a Facebook post on Friday, would reduce plastic bag use without increasing the use of substitute bags made from less harmful material, and without compromising the way that wet waste is disposed of in high-rise building garbage chutes.

Resistance from the National Environment Agency (NEA) to calls from green groups to ban or tax plastic bags has been based on the argument that residents living in high-rise buildings need plastic bags to hygienically dispose of their food waste, otherwise risk pest outbreaks. 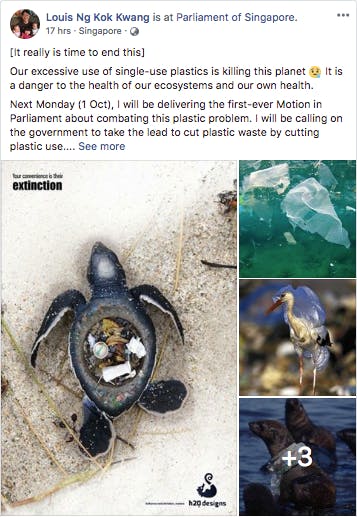 NEA released a report in March that found that as Singapore incinerates almost all of its waste, biodegradable bags are not an environmentally-friendly alternative to plastic bags.

Responses to Ng’s post ranged from citizens concerned that plastic legislation would mean additional costs, to pointing out that plastic bags are not the biggest problem, rather food packaging and styrofoam items. Plastic bags make up about a fifth of Singapore’s plastic waste stream.

Unlike other territories in the region such as Malaysia, China, Hong Kong and India, Singapore’s government has not introduced any legislation to tackle plastic pollution, instead relying on retailers to design their own initiatives to tackle plastic over-use, and on public information campaigns to curb consumption.

Singapore produced 800 million kg of plastic trash last year, with Singaporeans using an average of 13 plastic bags a day, according to a calculation by the Straits Times. Only 6 per cent of Singapore’s plastic waste was recycled last year—the rest was incinerated.

Singapore’s plastic problem has raised a level of concern among the public, with a petition titled “I don’t want to pay the price for ‘free’ plastic bags - Support a plastic bag charge!” directed at the Ministry of Environment and Water Resources gaining more than 19,500 signatures.