In soil-stressed India, it's time to swap chemical pesticides for natural farming

In the Indian province of Andhra Pradesh, ditching chemical pesticides and fertilisers in favour of natural farming has led to big increases in output and income for farmers. So what's stopping nationwide adoption of soil-friendly natural farming, writes Sourajit Aiyer.

India’s green revolution, a period from 1960s onwards that advocated the use of chemical fertilisers and pesticides to boost agriculture and food security, was useful in its time. But the time for a different approach has probably come.

India’s rapid population growth, food demand and evolving eating habits are clashing with a visible decline in soil health. This is due to the indiscriminate use of chemicals by largely illiterate farmers, an increase in water pollution and land temperatures, and the disappearance of beneficial fauna that would have otherwise regenerated the soil’s nutrient cycle.

This challenge becomes more pressing with a backdrop of the agrarian crisis afflicting Indian states. Short term solutions such as loan waivers are being waved as carrots rather than long-term steps to reduce the farmer’s investment, enhance his net income, and improve the land’s productivity and consumer health.

This is not just a rural issue. Urban communities have to endure the pressure of distressed rural migrants in cities, higher medical bills due to eating chemical-contaminated food, and higher prices for food as its supply falls short of demand.

From the perspective of investors looking at an emerging market like India, the situation is only delaying the entry of millions from rural India into the country’s addressable consumer base, therefore forcing companies to fight for market share from only the existent consumer base, which leads to price wars and an erosion of profits.

There’s lot of talk of innovations in the agriculture space. But let’s face it, many are high-cost techniques that are hard to scale. What’s needed is a low-cost approach that does not damage India’s stressed soils.

One avenue is agroecology. This combines ecological systems with food production, and incorporates nature’s resources into the farm itself. Few have demonstrated successful agroecology models worth emulating, but Zero Budget Natural Farming (ZBNF), which was implemented in the province of Andhra Pradesh two years ago, is a noteable exception.

The concept of ZBNF was propagated by Indian agriculturist Dr Subhash Palekar. Several Indian provinces have taken up the practice, but Andhra Pradesh is the only province which has adopted it as an official state-wide policy. The southeastern coastal state aims to convert all of its 6 million farmers from chemical-based farming to ZBNF by 2024-25. Aiding the provincial government’s state-wide roll out of the ZBNF programme is The Sustainable India Finance Facility, a partnership between UN Environment, BNP Paribas and World Agroforestry Centre. 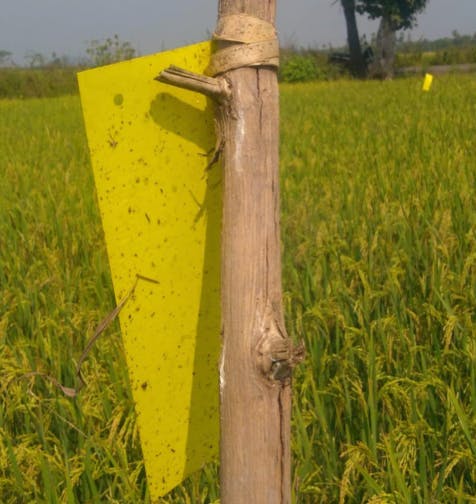 ZBNF practices seek to regenerate the virtuous cycle of nutrients in the soil by enhancing the activities of beneficial microorganisms. Some ZBNF techniques include applying a natural microbial mix to the soil instead of chemical fertiliser, coating seeds with this microbial mix, mulching the soil to reduce moisture evaporation, and planting a variety of crops to improve the soil’s nutrient balance. Chemical pesticides are replaced with natural solutions such as neem, chilli or simple insect-trapping tools like sticky yellow paper.

Most importantly, bio-inoculants and mixes are much cheaper than chemical inputs, easing the investment burden on farmers. The ZBNF fields in Andhra Pradesh have shown that they bring back beneficial microorganisms to the soil, reinstate the natural cycle of predator and prey, and generate the nutrients needed for plant growth.

Of course, a mass-scale project cannot succeed without proper implementation. The project deploys practicing ZBNF farmers as field cadres who give advice at farming self-help groups, explaining the process and its merits, and handholding the farmers switching to ZBNF.

But making the switch isn’t always easy. To overcome farmers’ resistance, the field cadres urge farmers to adopt ZBNF only on a small patch initially and scale up once results become visible. The project also uses agriculture graduates as natural farming fellows, who cultivate their ZBNF farms while handholding the converted farmers.

But does it really work?

During the 1,600+ crop-cutting experiments conducted on ZBNF fields across Andhra Pradesh after the summer crop season in 2017, the average output per acre was higher in ZBNF fields for all major crops.

Maize output per acre was 10 per cent higher, as was cotton’s. Guli ragi output rose by almost 40 per cent and groundnut, chilli and black gram all by more than 20 per cent. Anecdotal evidence from the farms showed better soil porousness and deeper root penetration, lower demand for water, formation of natural soil humus and a return of beneficial fauna.

Further evidence of the benefits of natural farming came during Cyclone Titli and Phethai, which struck Andhra Pradesh’s coast at over 100 kmph. Photos from ZBNF and non-ZBNF fields showed ZBNF crops withstood the storms better, resulting in better climate resilience both for the field and the farmer.

The crop-cutting experiments also increased ZNBF farmers’ net income by 88 per cent in the sampled cases, with particularly large increases in income for cotton farmers. Most of the farmers who opted to take up ZBNF are smallholder farmers, often the most neglected segment in traditional agriculture.

The combination of higher output and higher net income from a lower investment has helped make agriculture more profitable and sustainable for the farmers, who were otherwise moving to other occupations such as low-paid construction work.

Proof is in the produce

In the end, we need breakthrough solutions that are both low-cost and show long-term benefits. And two years in to the Andhra Pradesh experiment, we are seeing that going back to nature can be more profitable for farmers, consumers and businesses, as well as contributing to the Sustainable Development Goals of responsible production and consumption, good health and well being and zero hunger.

Of course, further scientific research is needed to build a stronger case for natural farming, which is already underway in collaboration with international institutions. This research could provide a platform for other nations to follow. But time will only tell how many governments will bite the bullet to transition away from chemical-based farming.